January 29, 2021, New Delhi: After much debate around Whatsapp’s latest privacy policy that requires users to agree to sharing of their data of chat with business accounts, payments and transaction information with its parent company Facebook and third parties associated with it, a huge public outcry emanated. Following the backlash and to prevent the migration of users to alternate platforms, the instant messaging app postponed its deadline to implement this policy in India from February 8th to May 15th, 2021. India’s The Ministry of Electronics and Information and Technology also wrote to Whatsapp asking them to withdraw the proposed policy changes and sharing of user data. The clarifications by Whatsapp highlight how it will not access or share private chats between consumers and only the chats with business accounts. Reports citing experts suggest that Whatsapp will access information such as OS, phone model, screen resolution, IP addresses, language, location, browsing history – but, not the private conversation between users or hear their calls as it is end-to-end encrypted. Whatsapp has clearly indicated that if users don’t accept the new privacy policy, you can delete your account.

LocalCircles survey released on January 13th had highlighted citizens’ response on how they will use Whatsapp, along with its Whatsapp Business and Whatsapp Pay features, if it implements the new privacy policy. In the survey that received 24,000 responses from across the country, 15% users indicated that they will stop using Whatsapp and move to other platforms. 67% of users said they will discontinue business chat if it shares user and transaction information exchanged on Whatsapp business accounts with Facebook and third parties. There were also 91% users who said they will not use its payment features if it shares payment and transaction information.

Now that it has been three weeks since whatsapp came out with the new privacy policy, LocalCircles has conducted another survey to understand if people are doing as they indicated and whether they are actually leaving whatsapp and migrating. Leaving a social network is easier said than done because the whole network or atleast 75% of the members of a group or 75% of an individual’s contacts must move to an alternate platform before they fully switch.

The survey result indicated that 67% of Indians are still actively using Whatsapp. There were also 22% of citizens who said that they have reduced usage of Whatsapp. Only 5% said they have deleted Whatsapp. 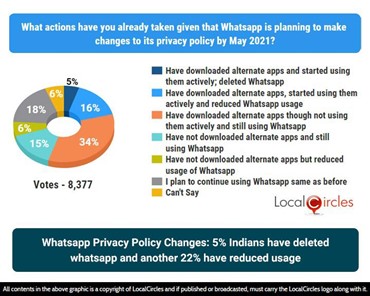 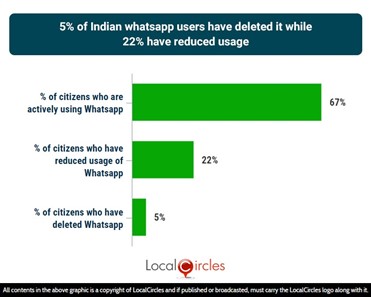 According to app analytics firm Sensor Tower, Signal recorded 26.4 million downloads from India between 4 January and 17 January, while Telegram had recorded 9.1 million downloads. There were also 5 million new downloads for WhatsApp during that period. The latest survey by LocalCircles indicates that while 55% of citizens have downloaded alternate apps, 21% of citizens are actively using it. Many users may have already had the Signal and Telegram apps on their phones before the new Whatsapp policy changes were proposed. 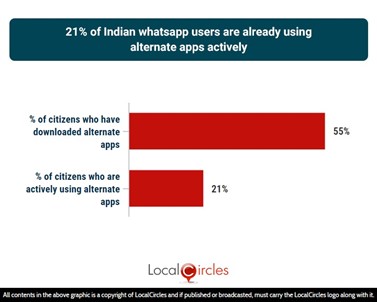 Whatsapp has come out with a clarification and specifically outlined that data of chats with business accounts along with user’s profile details, image, contact information will be shared with Facebook, Instagram and could be shared with third-party service providers. This in essence means that if a customer gets a Whatsapp Business Chat update for a flight booking they made on a website or app and the transaction details and invoice was shared on Whatsapp by the website or app, that data can be utilised by their competitor via Facebook advertising and the user could get unsolicited offers for hotels and taxi services on their Facebook, Instagram and possibly even their email, sms and Whatsapp.

Given this background, the survey asked citizens if going forward they plan to continue chatting with Whatsapp Business accounts, the majority of 75% users said “No”. Only 13% of citizens said they will not use payment but may use business chat. Only 1% said they will use both business chat and payments. There were 7% who voted “can’t say”. In the last survey, 67% citizens said “No”. Only 17% voted “Yes”, while 16% said they haven’t decided yet. 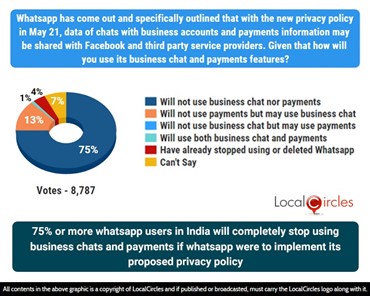 Per aggregate responses from citizens, the percentage of users who are likely to not use Whatsapp Pay if the instant messaging app decides to implement the policy come May 15th is at 92%. Whatsapp and Facebook must reconsider this feedback and make changes to their policy if they are serious about Whatsapp Pay becoming a key player in the UPI payments space in India. Currently Google Pay, Phone Pe and Paytm have majority of the market share in this segment.

Similarly, the percentage of users who are likely to not use Whatsapp Business Accounts if the instant messaging app decides to implement the policy come May 15th has increased by 12%, from 67% in January 12th survey to 79% in January 28th survey. 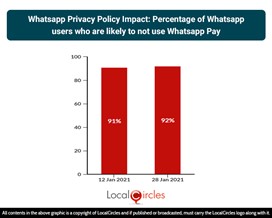 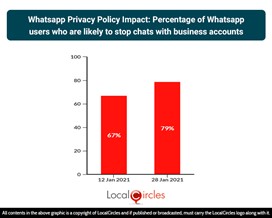 In summary, the Whatsapp privacy changes were poorly communicated to the Indian users leading to a ton of confusion amongst them. The clarification that these changes will not impact consumer chats and now the postponement of privacy policy implementation from February 2021 to May 2021 is an attempt by Whatsapp to slow the migration to alternate platforms. With the personal data protection bill coming up for approval in parliament in the upcoming session, Whatsapp may have to make tweaks to its privacy policy for India. It must be noted that this privacy policy is not being implemented in Europe. Whatsapp must reconsider its monetization approach because with what it has proposed, even if a sustainable migration doesn’t take place to alternate platforms, the survey suggests that a large majority are likely to stay away from business account chats and using the payments feature which defeats the purpose of this entire exercise. The key for the platform is to rethink monetization and perhaps move from an advertisement based monetisation to aggregate data based monetization or transaction based monetization.