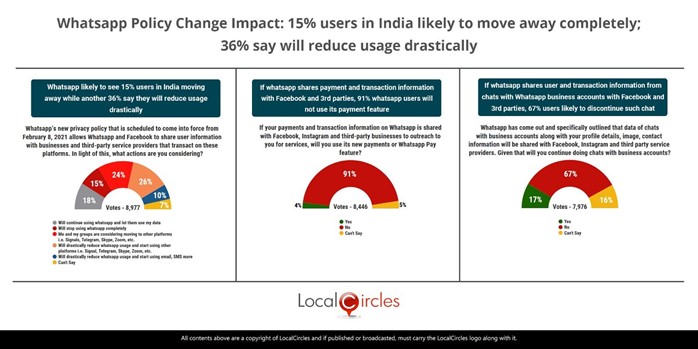 January 13, 2021, New Delhi: Come February 8th 2021, the instant messaging app Whatsapp has decided to start sharing its commercial user data with its parent firm Facebook, and accordingly tweaked its terms of service and privacy policy. It said to Whatsapp users in India: “After this date, you’ll need to accept these updates to continue using Whatsapp.” This means, in order to continue using Whatsapp, users will have to accept the terms. The decision by Mark Zuckerberg-owned Facebook, the parent company of Whatsapp, which has millions of users in India, hasn’t gone well and even the Ministry of Electronics and Information Technology is reportedly taking a close look at the instant messaging app’s latest move. Earlier, entities such as Facebook and Whatsapp, maintained the stance that they will not share user data with anybody. Once the users accept its revised policy, even the third-party companies associated with Facebook and its subsidiaries like Instagram, will have access to user’s data – a move that in a way establishes Facebook as the owner of users’ data. 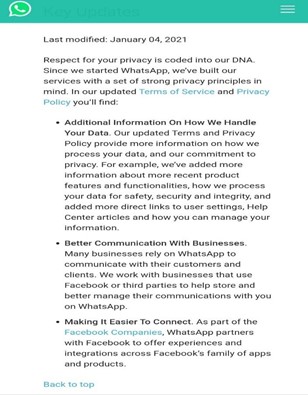 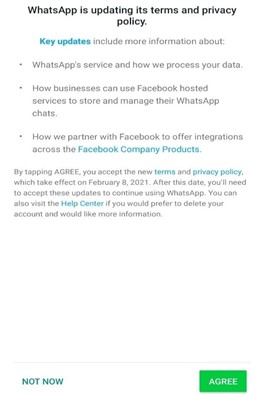 Social Media platforms in India like Twitter, LocalCircles and many others are abuzz with users talking about moving their business and family groups to platforms like Signal and Telegram. The same can be observed in existing whatsapp groups. CEOs of some Indian startups have communicated to employees to refrain from business communication on Whatsapp. It must be noted that for many small Indian businesses, Whatsapp serves as their primary internal communication channel, more so post COVID-19 pandemic. Similarly, many small businesses in India now use whatsapp post pandemic to accept orders from their customers for products and services.

With all of these conversations and aspects to consider, LocalCircles decided to conduct a survey to better understand what users might do in regard to their usage of Whatsapp going forward. Also, the survey attempted to understand how this change will impact use of Whatsapp business and Whatsapp pay. Whatsapp business allows businesses to chat with their customers and send them transactional messages while Whatsapp pay which was recently made available to all users in India allows customers to make a payment to their contacts. The survey received more than 24,000 responses from users of Whatsapp based in 244 districts of India.

Whatsapp likely to see 15% users in India moving away, 36% will reduce usage drastically

The first question tried to understand what citizens are considering regarding the new privacy policy that allows WhatsApp and Facebook to share user information with businesses and third-party service providers that transact on these platforms, come February 8. Responses from 8,977 citizens were received on this question. Of which, 26% of citizens said they will drastically reduce Whatsapp usage and start using other platforms, 24% said they and their groups are considering moving to other platforms, 15% said they will stop using Whatsapp completely, and 10% said to reduce Whatsapp usage and start using email, SMS more. Only 18% said they will continue using Whatsapp and let them use their data. The survey result indicated that the messaging app is likely to see 15% users in India completely moving away, while 36% will reduce usage drastically. 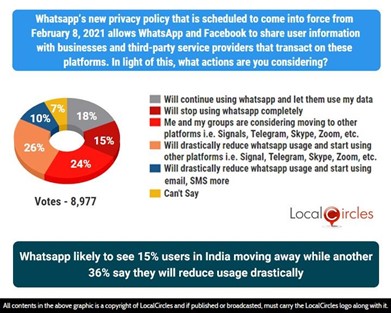 If one goes by the survey findings, whatsapp could possibly experience 60M users going away which is based on the assumption that 400 million smartphones in India currently have whatsapp installed.

Whatsapp in its latest press statement has maintained that it cannot see users’ private messages or hear their calls and neither can Facebook. It also said that it does not keep logs of who everyone is messaging or calling, it cannot see shared locations, it does not share contacts with Facebook. Further it maintains that Whatsapp groups will remain private, and users can also set their messages to disappear, and download their data.

Whatsapp has come out with a clarification and specifically outlined that data of chats with business accounts along with user’s profile details, image, contact information will be shared with Facebook, Instagram and could be shared with third-party service providers. This in essence means that if a customer gets a Whatsapp Business Chat Update for a flight booking they made on a website/app and the transaction details and invoice was shared on whatsapp by the website/app, that data can be utilised by their competitor via Facebook advertising and the user could get unsolicited offers for hotels and taxi services on their facebook, instagram and possibly even their email, sms and whatsapp.

Given this background, the survey asked citizens if going forward they plan to continue chatting with Whatsapp Business accounts, majority of 67% citizens said “No”. Only 17% voted “Yes”, while 16% haven’t decided yet.

Whatsapp business accounts have been used by many companies like Myntra, Makemytrip, Bookmyshow etc. to share transaction details, invoices, vouchers etc. with the customers. Also, small businesses now are using whatsapp business accounts to interact with their customers, take orders and supply goods. Citizens have also outlined cases where a user has both whatsapp and whatsapp business account on the same device with one being used for business messaging. With the latest policy update by Whatsapp, information of these business messages can now be used by competitors or the business itself to better target users on Facebook platforms and according to activists and experts even off Facebook.

If whatsapp shares user and transaction information from chats with Whatsapp business accounts with Facebook and 3rd parties, 67% users likely to discontinue such chat 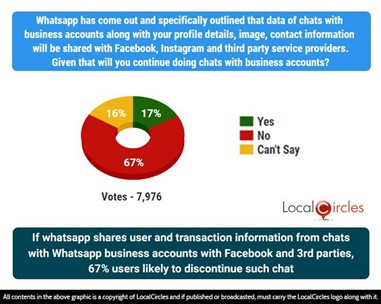 Whatsapp was given the nod to gradually launch payments in India, after two-and-a-half-year period functioning in a beta-mode. Initially there was a lot of excitement amongst users. When LocalCircles had done a survey on willingness of users to migrate to Whatsapp Pay in February 2018, 29% of the digital wallet and UPI users had said that they would migrate to Whatsapp Pay once it becomes available. With this new development, LocalCircles asked citizens, “If your payments and transaction information on Whatsapp is shared with Facebook, Instagram and third-party businesses to outreach to you for services, will you use its new payments or Whatsapp pay feature?” Responses from 8,466 citizens were received. Of which, the majority of 91% Whatsapp users said “No”. Only 4% said they will continue using Whatsapp, while 5% haven’t decided yet.

If whatsapp shares payment and transaction information with Facebook and 3rd parties, 91% whatsapp users will not use its payment feature 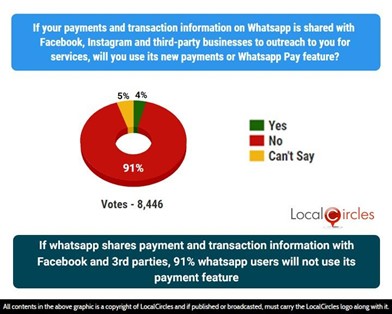 It was assumed that payments and transactions will happen with Whatsapp Business Accounts largely and hence this information in direct or indirect form could be utilised on Facebook, Instagram or by third party businesses to target users.

Based on the feedback received, a whopping 91% users have indicated that they will not use Whatsapp Pay if their payment or transaction information was shared to target them. Whatsapp and Facebook must reconsider this feedback and make changes to their policy if Whatsapp Pay were to become a key player in the UPI payments space in India. Currently Google Pay, Phone Pe and PaytM have majority of the market share in this segment.

In summary, the Whatsapp privacy changes were poorly communicated to the Indian users leading to a ton of confusion amongst them. The clarification that these changes will not impact consumer chats helps a bit but a sizable amount of damage is already done. With the personal data protection bill coming up for approval in parliament in the upcoming session, Whatsapp may have to make tweaks to its privacy policy for India. If it is able to win the confidence of the user through effective communication and more importantly ensuring that targeted advertising is relevant and limited to presentation of products and services only via Facebook platforms, it will likely be able to control the mass migration to platforms like Signal.