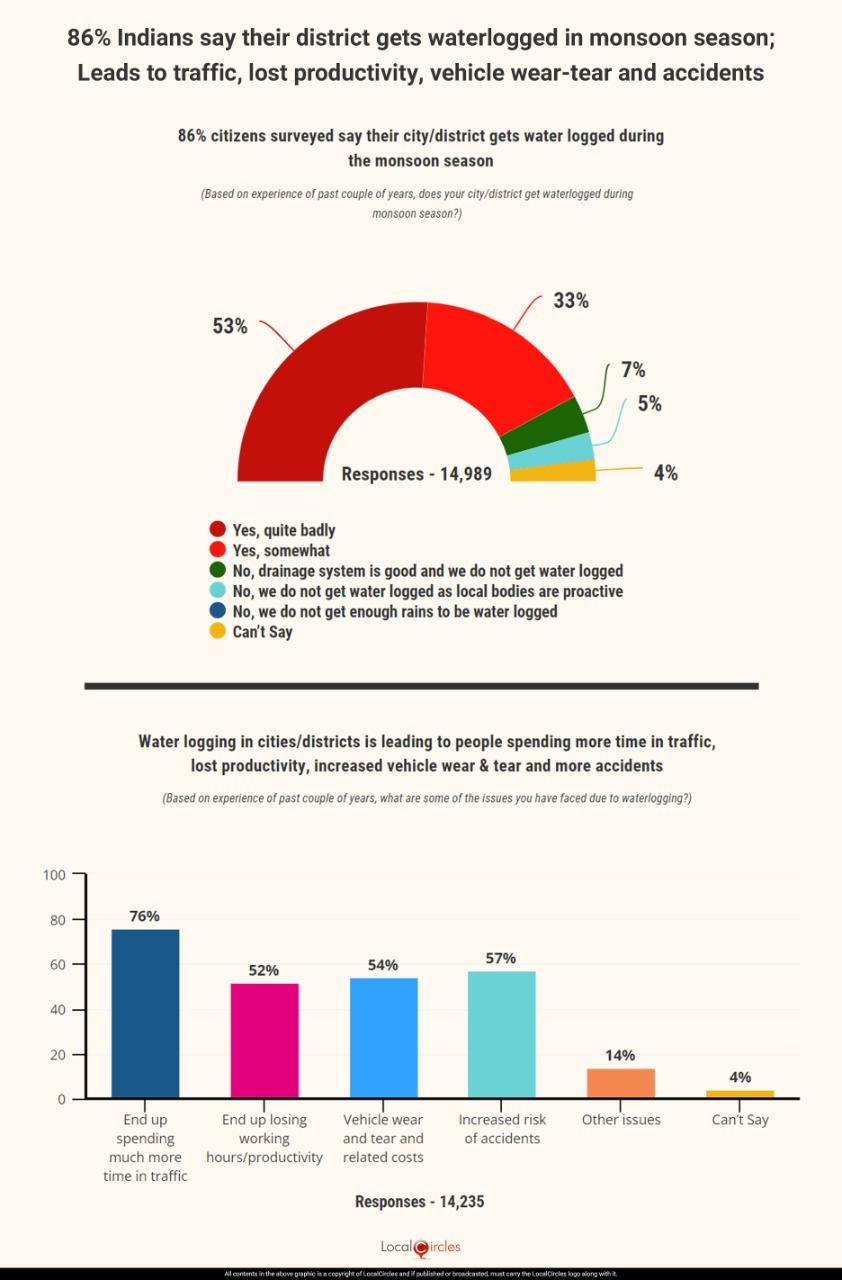 June 30, 2022, New Delhi: Different parts of states and UTs across India have already witnessed several days of heavy rainfall this monsoon season and some of it is creating a havoc, displacing lives and livelihood. Even in urban areas in India, waterlogging continues to be a major problem with even the roads in the national capital getting waterlogged after just a couple of hours of rain. Every year, when the monsoon season takes off, different cities and districts of India make headlines from rainfall causing waterlogging due to apathy and nonchalance by the authorities to look into the issue of poor external and internal drainage. Cities and districts like Gurugram, Delhi, Mumbai, Kolkata, Bengaluru, among others, are some of the top cities that routinely experience waterlogging, causing major traffic disruptions for people to go to work, visit markets, and even for children to attend school. Often, it becomes a herculean task for authorities to clean the drains to clear the storm water. This is mainly because of poor upkeep and maintenance of drains, often used as waste dumping spots, which in turn obstruct the flow of storm water in case of heavy rains leading to waterlogging. To understand the extent of waterlogging and how life of people gets negatively impacted due to it, LocalCircles conducted a national survey that received more than 29,000 responses from citizens residing in 304 districts of India. 67% respondents were men while 33% respondents were women. 48% respondents were from tier 1, 27% from tier 2 and 25% respondents were from tier 3, 4 and rural districts.

The first question in the survey asked citizens, “Based on experience of past couple of years, does your city/district waterlogged during monsoon season?” In response, the majority, 53% of citizens said “Yes, quite badly”, and 33% said “Yes, somewhat”. Breaking down the poll, 7% said “No, drainage system is good and we do not get water logged”, 5% also said “No, we do not get water logged as local bodies are proactive”. 2% couldn’t say. On an aggregate basis, 86% of citizens surveyed say their city/district gets water logged during the monsoon season. This question in the survey received 14,989 responses. 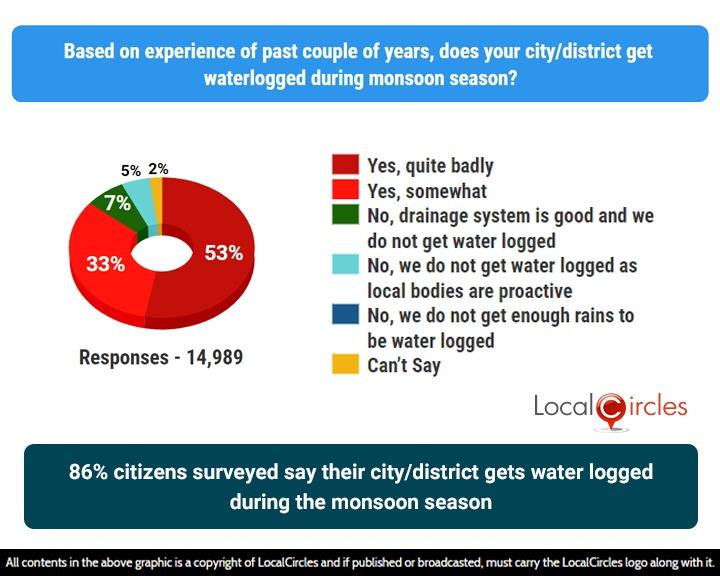 The following question asked citizens, “Based on your experience of past couple of years, what are some of the issues you have faced due to water logging?” In response, 76% said they “End up spending much more time in traffic”, 52% said they “End up losing working hours or productivity”, 54% said “Vehicle wear and tear and related costs”, 57% said “Increased risk of accidents”, while 14% cited “other reasons”. 4% did not have an opinion. On an aggregate basis, water logging in cities/district is leading to people spending more time in traffic, lost productivity, increased vehicle wear & tear and more accidents. This question received 14,235 responses. 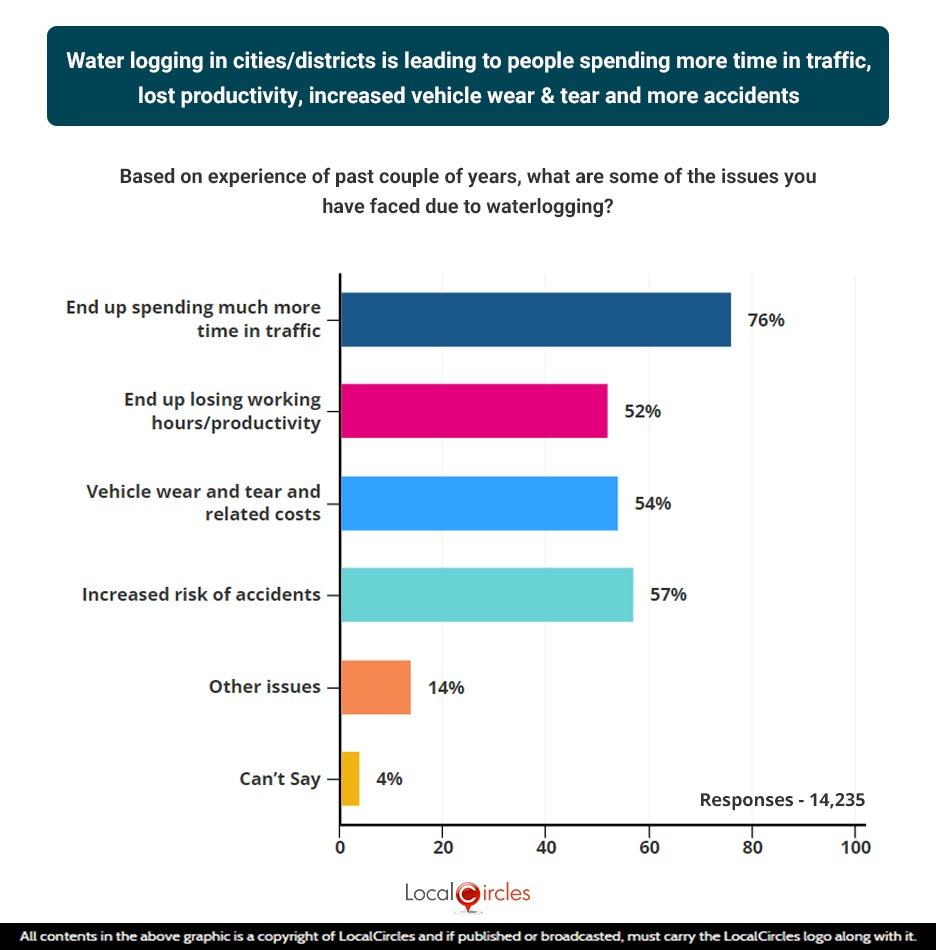 On a day when streets are waterlogged, 76% people end up spending much more time in traffic. In areas like Delhi NCR or Mumbai region where many travel for an hour or more to get to work, many relying on public transport end up losing working hours and their livelihoods. 52% in the survey confirmed that. For 54% respondents in the survey, waterlogging leads to increased vehicle wear and tear and related costs. With 86% people explicitly stating that their city or district experiences water logging, the writing is on the wall. India needs liveable cities with effective drainage systems and not smart cities that take decades to build.