Consumers unhappy with Vehicle Scrappage Policy, want kilometers run to be the criteria to define old vehicles instead of age

June 9, 2022, New Delhi: Prime Minister Narendra Modi in August 2021 launched the Vehicle Scrappage Policy that aims to eliminate polluting vehicles in the country that are old and defective. India is a large country with the 2nd largest population in the world and is the 3rd largest pollution emitter with 6.6% after China with over 27% and the US at 11%. The new scrappage policy outlines the criteria to pass the fitness test for vehicles upon emission test for vehicles that are more than 15 years old, its safety, equipment test among many other tests as per the Central Motor Vehicle Rules, 1989. The new vehicle scrappage policy mandates fitness testing for commercial vehicles in every 2 years for vehicles older than 8 years. In case of personal vehicles, the owners need to get the fitness test done after 15 years for vehicles that are over 15 years old. It provides some incentives to vehicle owners to scrap their old and unfit vehicles while buying a new vehicle which include discounts in registration fees and road tax. However, the penalty fee of INR 300-500 per month may be levied for private vehicles failing to renew the registration of their vehicle, and a daily penalty of INR 50 for commercial vehicles. Several states are in the process of signing MOUs with private vehicles to set up vehicle scrapping facilities.

LocalCircles has been getting lots of posts and comments from people across the country on the vehicle scrappage policy, a lot of concerns in fact. To understand the key issues, it conducted a national survey to gather consumers pulse on the policy. The survey attempted to understand the opinion of vehicle owners in the country about various criteria laid in the policy, including eligibility of vehicles for scrapping at the time of the renewal of fitness certificate for transport and personal vehicles that are over 15 years old and what changes in the policy would be beneficial for vehicle owners in the long run. The survey received over 34,000 responses from consumers across 291 districts of India. Of which, 55% were from tier 1, 32% from tier 2, and 13% respondents were from tier 3, 4 and rural districts.

According to Union minister, Nitin Gadkari, around 1 crore vehicles are without valid fitness certificates. Reportedly, there are over 51 lakh light motor vehicles (LMVs) that are older than 20 years and 35 lakhs are over 15 years old. In addition, 17 lakh medium and heavy vehicles are older than 15 years, and are without fitness certificates. Ever since the Government of India announced to implement the new Vehicle Scrapping Policy, which capped the life of commercial and private vehicles based on the number of years, there has been an increase in the number of consumers’ posts on LocalCircles suggesting an alternative. Many vehicle owners are of the opinion that the scrapping of vehicles should be based on kilometers-run, rather than the age of the vehicle. For instance, a private vehicle owner may have a vehicle older than 15 years, but they may have driven it for less than 50,000 kilometers. 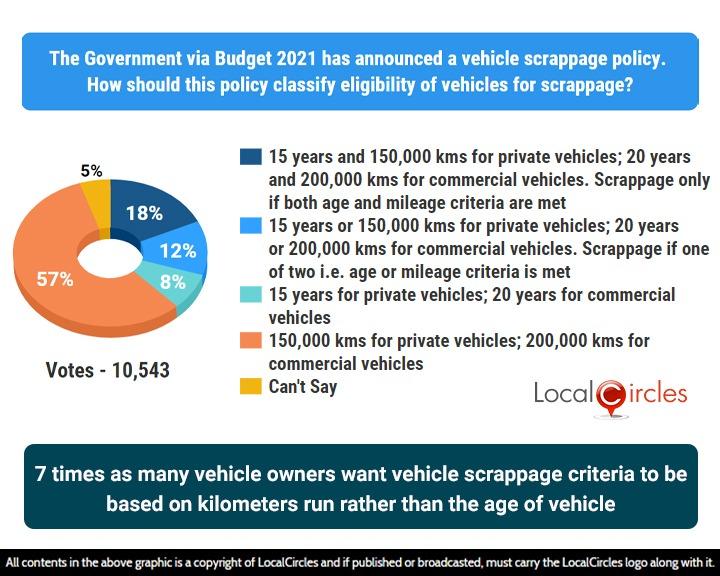 As part of the rollout of the Vehicle Scrappage Policy, the Minister of MoRTH announced that vehicle owners per the policy will get an incentive of 4-6% of the ex-showroom price as scrap value when they buy a new vehicle. As an incentive, there will also be a waiver of the fee for the issue of the certificate of registration for a new vehicle. He also stated that State Governments may be advised to offer a road-tax rebate of up to 25% for personal vehicles and up to 15% for commercial vehicles. He said that vehicle manufacturers have been advised for providing a discount of 5%, along with waiving off registration fees, on the purchase of a new vehicle against the scrapping certificate.

Consumers buying a new car by scrapping their old one can avail of a 4-6% rebate from automakers under the new Vehicle Scrappage Policy. Consumers on the LocalCircles platform are of the view that incentives in the form of a tax deduction or major rebate on road tax should be offered if a person is scrapping an old vehicle and buying a new one. 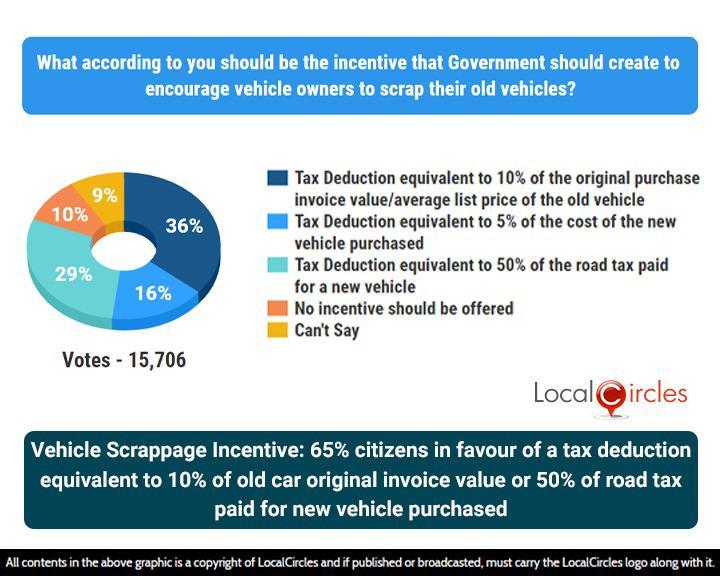 All heavy commercial vehicles such as trucks and buses would have to get the fitness tests done from approved automated testing stations from June 2023, according to a notification by the road transport ministry. For personal, medium good and passenger vehicles, this mandatory norm would be effective from June 2024. The next question in the survey asked consumers, “The Government has announced that after 15 or 20 years, an old vehicle will need to take a fitness test costing INR 40,000 every 5 years and pay 10% to 25% of road tax as green tax. Given these costs, what will be your household’s vehicle ownership approach going forward?” In response, 34% said “replace old vehicles over time with new vehicles but continue to have the same number of vehicles”. Breaking down the poll, 9% said “instead of owning vehicles, we will consider leasing them”. There were also 24% of consumers who said “reduce the number of vehicles owned by our household and use app taxis at times”, 18% said “own bare minimum number of vehicles and use app taxis significantly more”, while 15% said “can’t say”. The findings of the poll indicate that 51% of households that own vehicles are likely to reduce their vehicle ownership going forward once the Vehicle Scrappage Policy becomes enforceable.

The findings come at a time when the app taxi aggregators are struggling in India in keeping consumers satisfied and drivers happy. Driver cancellations are rampant and surge pricing guidelines under the Motor Vehicle Aggregator rules are flouted often. If however the app taxi aggregators get their models right, there may clearly be more opportunity for them here as some households look to reduce their vehicle ownership in the coming years. Many LocalCircles members expressed concerns that it may not be a worthy investment buying a personal diesel vehicle any more if the total usable lifespan of such vehicles is limited to 10 years by this policy. 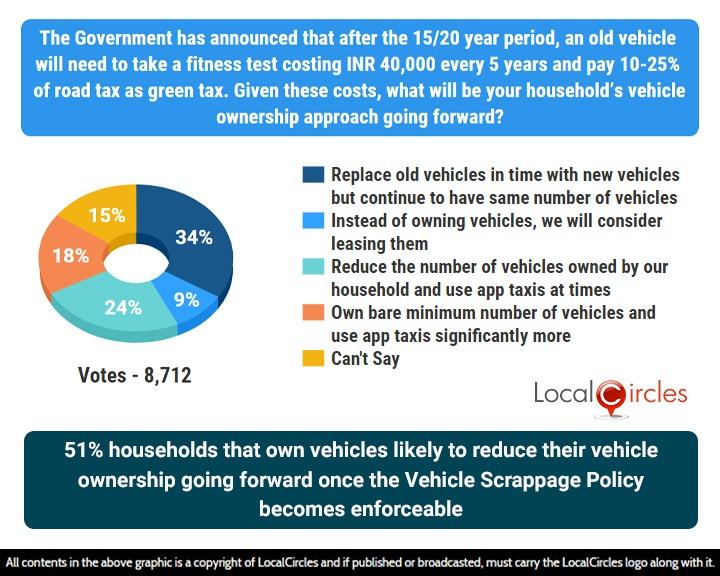 In summary, majority of the consumers are not happy with some of the criteria laid out by the vehicle scrappage policy. 7 times as many vehicle owners want vehicle scrappage criteria to be based on “kilometers run”, rather than the “age of vehicle”. A large number of consumers have vehicles that are over 10 or 15 years of age but have less than 50,000 kilometers on the vehicle. Many of them are simply not ready to scrap their vehicles and buy new ones or incur a sizable additional cost to get their vehicles certified.

Further, 65% of consumers in the survey are in favour of a tax deduction equivalent to 10% of the old vehicle’s original invoice value or 50% of road tax paid for a new vehicle purchased. People fell that the current incentives offered by the policy are not sufficient and the Government needs to make scrapping of old vehicles a more attractive proposition.

With the currently policy terms, many feel that they are stuck where it is expensive to retain an old vehicle given all the needed certifications and the incentives offered are not sufficient to buy a new vehicle. Hence, 51% of households that own a vehicle currently are willing to reduce their vehicles ownership going forward once the Vehicle Scrappage Policy becomes enforceable.

All in all, the Government needs to take a fresh look at the Vehicle Scrappage Policy basis the consumer feedback received in this survey. The Motor Vehicle Act 2019 is an example of an act where the enforcement is failing because of the lack of support by states. In the case of Vehicle Scrappage Policy the primary stakeholder is the vehicle owner and the Government must put in all efforts possible to get their buy in.

LocalCircles will submit the findings of the survey to the Ministry of Road, Transport, and Highways so that consumers’ feedback is taken into consideration, and appropriate amendments be made before the Vehicle Scrappage Policy becomes enforceable.

The survey received over 34,000 responses from consumers across 291 districts of India. Of which, 55% were from tier 1, 32% from tier 2, and 13% respondents were from tier 3, 4 and rural districts. The survey was conducted via LocalCircles platform and all participants are validated citizens who had to be registered with LocalCircles to participation.