June 27, 2021, New Delhi: As the Central Government of India made vaccination free of cost at its centers for all citizens above 18 years of age from June 21, a record 86.16 lakh COVID-19 vaccine doses, either Covishield or Covaxin, were administered across the country on the first day, the highest single-day coverage till now. Since the vaccination drive that started in India on January 16th of this year, over 30 crore vaccine doses have been administered so far.

Medical experts have suggested that the vaccine will protect citizens from severe disease, in terms of hospitalisation or death. Increasing the availability of vaccines, with 50-80 lakh vaccine doses expected to be administered on a daily basis, is likely to take the inoculation drive to most of its citizens in the coming months, which is vital to contain and mitigate the COVID spread as well as minimize the impact of the 3rd wave. States on the other hand, are encouraging residents to get inoculated, conducting awareness drives in both urban and rural areas, and even mandating vaccination in some places vis-a-vis addressing myths that surrounds vaccines. Vaccine hesitancy has been cited as one of the top 10 global health challenges by the World Health Organisation and India is experiencing its share of vaccine hesitancy.

Of those who haven’t taken a COVID vaccine dose yet, only 29% willing to do so soon while another 24% may take it down the road as more vaccines become available and more vaccine efficacy-variant data emerges 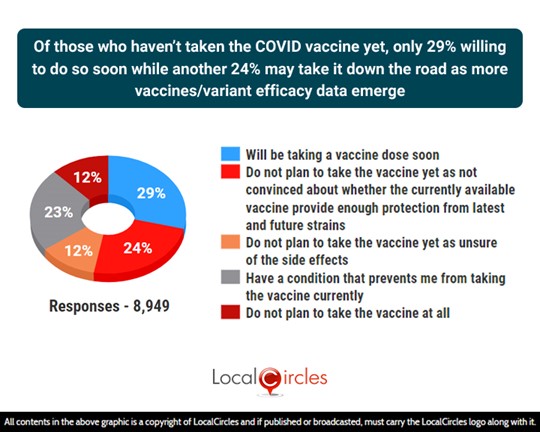 Experts have warned that the 3rd wave of the COVID outbreak is likely to hit India in less than 2 months, or in August to December period, with a more infectious variant, called Delta Plus, which is a major concern in India. There are already over 50 cases of Delta Plus variant found across several states in India with highest numbers in Maharashtra and research is indicating that the variant has immune escape making the virus less susceptible to the vaccine. In addition to concerns about the variants evading vaccine, there is apprehension amongst people that can be attributed to questions on safety, quick clinical trials and rushed vaccine approvals. People in the LocalCircles discussions have raised concerns about over 700 Doctors dying in the 2nd COVID wave, most reported to have been double dose vaccinated. The side-effects of the vaccines also remain a cause for concern. Basis feedback, it appears that many in urban areas are also waiting for more data on Covishield and Covaxin and their efficacy with the Delta and Delta Plus variants and for some of the foreign vaccines to start becoming available before they take the jab. In rural areas, there are myths and misinformation partly and partly some reported cases where the breakthrough infection caused deaths setting vaccine fear. For instance, many citizens in a rural district in Assam are suspicious of the vaccine as they believe they will die after taking the jab. Nuan Khera, a village in Haryana reported a low footfall for vaccines despite setting up a vaccine centre. 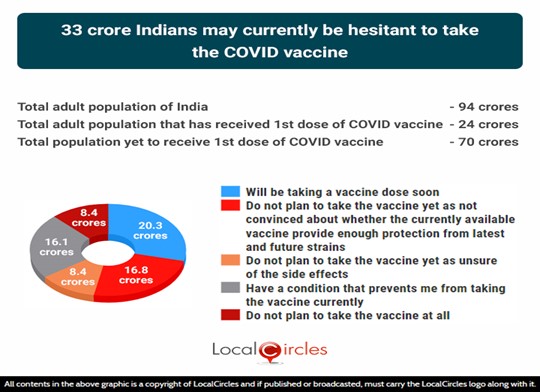 If it is assumed that India has 94 crore adult population and 24 crore have received their first dose, it leaves us with 70 crore adults still not vaccinated. If the percentages of the different categories is applied to this 70 crore population, it indicates that 20.3 crore citizens may take the vaccine as soon as they get the opportunity. Another 16.8 crore citizens are awaiting more information on vaccines, variants, efficacy of existing vaccines like Covishield and Covaxin and some are even awaiting arrival of more vaccines. Beyond that 8.4 crore citizens are hesitant because of side effect worries and another 8.4 crore are currently of the mindset that they will not take the vaccine. Then there is the 16.1 crore who believe that they cannot take the vaccine due to a medical condition they currently have. While these are approximations based on the application of survey findings to the unvaccinated population, it does provide a broad idea of how the hesitant pie might be looking like.

In summary, the survey of the unvaccinated population shows that only 29% are willing to take the vaccine soon and 24% may take it if they get convinced about the efficacy or if more vaccines become available. If the survey findings are applied to the unvaccinated population of 70 crores, it indicates that just about 20 crore citizens will take the vaccine in the near future and another 17 crore may take it once more data and vaccines become available. However, we may be left with 33 crore citizens who are currently not inclined to take the vaccine. It is this population that must be the target of all vaccine awareness, sensitisation and information drives.

With experts having warned that the 3rd wave of the COVID outbreak is likely to hit India in less than 2 months, or in August to December period, with the Delta Plus variant potentially becoming a major concern, there is an urgent need to vaccinate as many citizens as possible this year. One thing that is clear from research in India and overseas so far is that even with the Delta and Delta plus variants, those that are fully vaccinated are significantly better protected than those who are unvaccinated. Hence the need of the hour is for the Government to maximise availability of both Indian and foreign made vaccines, share data on the existing vaccines as it emerges and initiate targeted vaccine awareness and sensitisation program to convert as many of those that are hesitant into

LocalCircles will share the findings of this survey with key stakeholders in the Central and State Governments so actions can be taken to address vaccine hesitancy.