April 11, 2021, New Delhi: The COVID-19 vaccines largely help our bodies to develop immunity to the virus that causes COVID-19 without us having to get the illness. India has already inoculated more than 10 crore doses with either Covishield or Covaxin since it started its ambitious vaccination drive on January 16th, 2021. However, amid the 2nd wave of Covid cases across the country, India is now reporting over 150,000 daily cases far surpassing the peak of 97,400 it hit in 2020. As India expands its vaccination drive with vaccines now being made available to all above the age of 45 and plans to inoculate 50 lakh people each day, leaders of some states in India are reporting a vaccine shortage. Citizens from locations like Mumbai and parts of the Delhi National Capital region have also shared their feedback on LocalCircles suggesting that some hospitals have boards indicating that they either have limited doses or no doses available on a particular day. However, the Health Minister of India Dr Harshvardhan has indicated that the country has enough doses.

To understand what people are exactly facing on the ground, LocalCircles has conducted a survey to gauge if people who have gone to the vaccination centers have in fact experienced this shortage as claimed by some. Also, the survey asked citizens whether India should get foreign companies like Pfizer, Moderna, Johnson & Johnson to bring their vaccines to India such that the supply of doses is not a constraint. The survey received more than 24,000 responses from citizens located in 255 districts of India.

India has administered over 10 crore vaccine doses to its citizens since the immunization drive began on Jan 16th this year. It has also supplied more than 481 lakh doses of COVID-19 to more than 80 countries across the world under the vaccine maitri program as well as under direct supply agreements by the Serum Institute of India. However, the worrying factor is that amidst the spike in Covid cases across India, media ground reports from states are suggesting that just over 5 days of vaccine stocks are currently remaining, while an additional week's supply is in the pipeline. In states like Andhra Pradesh and Bihar, current stocks are for less than 2 days and in others, like Odisha have barely enough for 4 days. The spokesperson of the Ministry of External Affairs has said that India’s move on the export of vaccines would be done keeping in mind the domestic requirements.

As posts and comments were received from people across India about vaccination centers displaying their current stock level as well as some people returning from vaccination centers without getting inoculated, the survey sought to understand from citizens if they or anyone in their social network faced a scenario in the first 10 days of April that they or someone in their network went to get vaccinated and the center was out of vaccine stock. In response, 6% said “happened with 4 or more individuals in my social network”, 6% said “happened with 2-3 individuals in my social network”, and another 6% said “happened with 1 individual in my social network”. There were, however, 76% saying “did not happen with anyone”, while 6% couldn’t’ say. The aggregate response indicated that 18% of citizens had someone in their social network who could not get a vaccine dose when they went for vaccination in the first 10 days of April. This question in the survey received 9,016 responses. 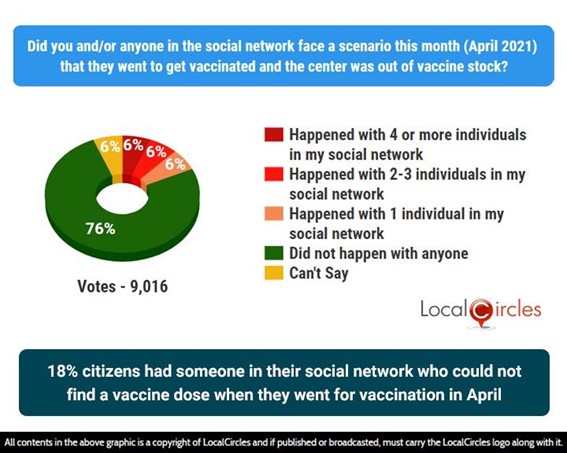 It may be noted that many senior citizens got their first dose in the first 10 days of March and were scheduled to go for getting their second dose during the first 10 days of April. Some went as scheduled and some decided to follow the revised 6-8 week gap between two doses of Astrazeneca vaccine or Serum’s Covishield in India. 18% of citizens or their family/friends facing the issue of going to a vaccination center but not getting the vaccine is something that must be looked into by the Central and State Governments. The shortage may be due to sub-optimal local distribution, while it is also possible that certain centers or locations have a genuine shortage. It must also be noted that as the 2nd wave of Covid strengthened in India, 77% of citizens in the LocalCircles survey in April expressed interest in taking the vaccine. The number stood at 38% when India started its vaccination drive thereby marking a major decline in vaccine hesitancy in the 80 days period. This decline in vaccine hesitancy could also be contributing to the demand-supply mismatch.

56% citizens in favour of India getting Pfizer, Moderna, J&J to conduct trials and make the vaccine available here by June

The US-based vaccines, Pfizer and Moderna are found to be about 90% effective, and the efficacy of Johnson & Johnson’s single-shot vaccine is currently reported to be 66%. According to media reports, the Government of India had held discussions with Pfizer and Moderna to make their vaccines in India. Pfizer Inc has reportedly told the Indian Government that it wants to produce its COVID-19 vaccine locally if assured of faster regulatory clearance and freedom on pricing and exports. Pfizer and Moderna vaccines are more expensive than AstraZeneca’s Covishield and Bharat Biotech’s Covaxin being used in India's vaccination campaign. Notably, in other countries, such as the US, not only has Moderna, Pfizer, and J&J, but they also have vaccines from Novavax and AstraZeneca too available for their citizens. Taking a cue from what other countries are doing to make as many vaccines available to their citizens, the survey sought citizens of India’s view of the Government of India should take a similar approach and get the US-based vaccine makers, Pfizer, J&J, and Moderna, to conduct trials such that these vaccines can also be made available in India by June. In response, 56% of respondents said “Yes”. There were only 33% who said “No”, while 11% couldn’t say. This question in the survey received 15,233 responses.

56% citizens in favour of India getting Pfizer, Moderna, J&J to conduct trials and make the vaccine available here by June 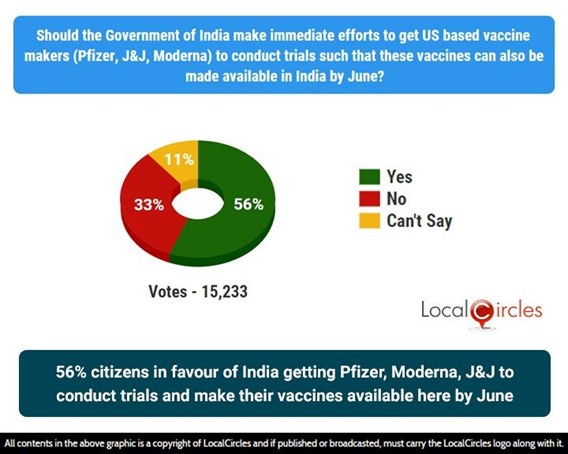 In summary, the findings of the survey indicated that 18% of citizens had someone in their social network who could not find a vaccine dose when they went for vaccination in April. Both the Central and State Governments must identify the root cause of whether it is a local distribution issue or if there is a genuine shortage in certain locations. It can be mentioned here that the Serum Institute of India currently produces 2 million vaccines a day, and Bharat Biotech produces 0.3 million vaccines in a day. If India continues to vaccinate 3 million people a day and if these two providers are unable to scale their production, India will need to import vaccines from other countries. Such a move has the support of 56% of citizens surveyed who are in favour of India getting Pfizer, Moderna, and J&J to conduct trials and make the vaccine available here by June.

Given the massive 2nd Covid wave that India is experiencing, it is critical to maximise vaccination along with testing, tracing, treating and containment. Global data suggests that one might still contract Covid after 2 doses of the vaccine but the chances of them going to the ICU or dying are near zero, and hence India must do all possible to ensure it has enough doses available and they are administered at a rapid pace to ensure the country wins this fight against COVID-19.

LocalCircles will escalate the findings of this study with key stakeholders in the Central Government such that the above concerns and suggestions from citizens are looked into.