Citizens want service charges by private hospitals for vaccines to capped; registration charges to be banned 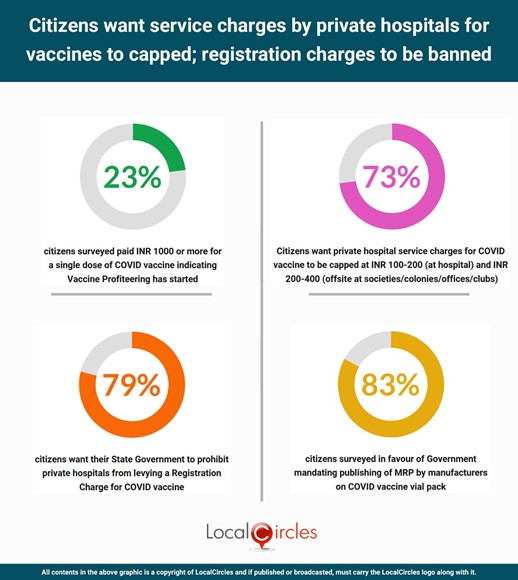 June 2, 2021, New Delhi: In the 3rd phase of immunization drive in India starting May 1, the Government of India allowed the vaccine manufacturers of the country to fix rates for their vaccines. Covishield developed by Serum Institute of India and Covaxin by Bharat Biotech sell their vaccine to the Centre at INR 150 while the States must pay INR 300 and INR 600 for these doses respectively. Private hospitals, on the other hand can procure a dose of Covishield at INR 600 and Covaxin at INR 1,200. However, many citizens from around the country who are trying to get the jab by visiting private hospitals or where the vaccine is being administered at community centers, neighbourhoods, etc. have reported being charged INR 1500 - 2000 for one dose of Covaxin and between INR 1000 - 1200 for one dose of Covishield. Per media reports, citing manufacturers, Covishield’s annual production capacity has been increased to 2.5 billion doses and Covaxin to 700 million doses a year.

LocalCircles has conducted a survey to understand what private hospitals and healthcare facilities are charging citizens for per dose of Covid vaccine. It also tired to understand if citizens believe that the Government should cap service charges and ban levying of hospital registration charges for administering the COVID-19 vaccine. Based on citizen asks, it also sought to know people’s perception if the Government should make it mandatory for vaccine manufacturers to publish on every vial its maximum retail price (MRP) as the highest price that can be charged to citizens. The survey received over 35,000 responses from citizens located in 304 districts of India. 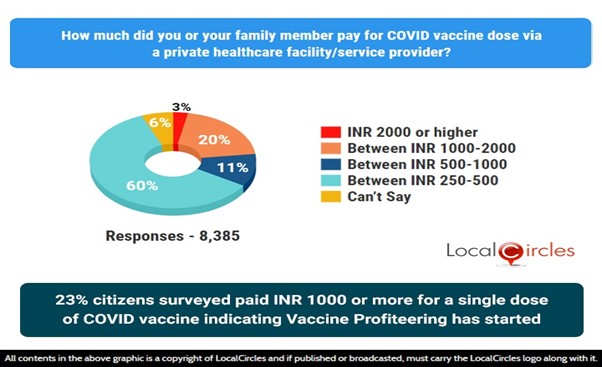 Citizens want private hospital service charges for COVID vaccine to be capped at INR 100-200 (at hospital) and INR 200-400 (offsite at societies, colonies/offices/clubs)

In February 2021, private health care centres were allowed to levy a service charge' from beneficiaries to meet their operational expenses—syringes, needles, manpower, etc—during the COVID-19 vaccination drive. However, hospitals started charging anywhere between INR 200-500 for the same. Considering the shortage of the vaccine in India, common citizens need to be encouraged to take the vaccine, which will be impossible with such high prices. 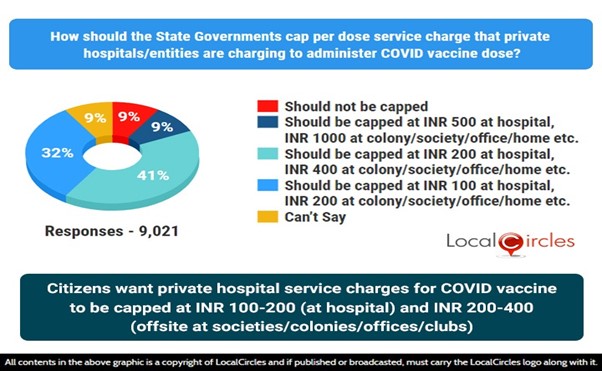 Several citizens reported that some hospitals were making those seeking the vaccine to go through a hospital registration process and charging INR 100-500 for the same in addition to the vaccine cost and service charge. When citizens visit hospitals for OPD or admission, many times they are made to pay a registration fee and many hospitals have started charging the same fee for those seeking COVID vaccine. The next question asked citizens, “Should State Governments prohibit private hospitals from levying a registration charge for COVID vaccine dose?” In response, 79% citizens said “yes,” only 13% said no while 8% couldn’t say. This question in the survey received 9,063 responses. 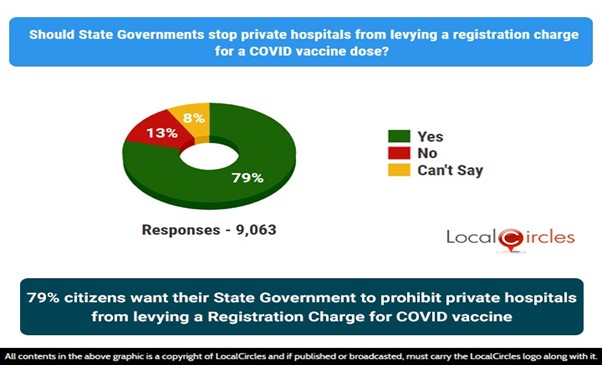 All medicines are required to have a Maximum Retail Price on the packaging to ensure that the consumer is not overcharged. Several citizens raised and discussed the issue of MRP not being published on vaccine vial. A vial of Covishield as well as Covaxin has 10 doses and citizens have demanded that a MRP be published on the vial by the manufacturers. To understand if there was broad consensus for this ask, the final question in the survey sought to know from citizens if the Government should make it mandatory for vaccine manufacturers to publish on every vial its maximum retail price (MRP) as the highest price that can be charged to citizens. In response 83% said yes. Only 12% said no, while 5% did not have an opinion. This question in the survey received 8,518 responses. 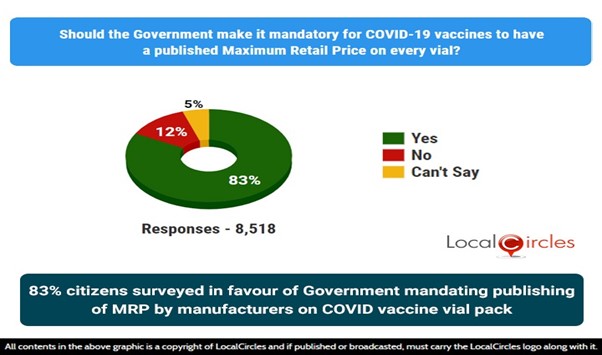 In summary, the findings of the survey indicate that 23% of citizens paid above INR 1000 for a single dose of Covid vaccine and 3% citizens claimed to have paid over INR 2000 indicating that vaccine profiteering by private hospitals has already started. The private hospitals are purchasing Covishield for INR 600 and Covaxin for INR 1200 but many citizens have reported paying over INR 1000 for Covishield with the premium charged in form of service charge and/or registration charge. 73% citizens are keen that their State Government caps private hospital service charges for COVID vaccine at INR 100-200 (at hospital) and INR 200-400 (offsite at societies, colonies/offices/clubs) and 79% citizens also want their State Government to prohibit private hospitals from levying a registration charge for COVID vaccine administration.

In order to make sure that there is uniform pricing in the Covid vaccine, citizens also want the Government of India to make it mandatory for manufacturers to publish MRP on each Covid vial pack. This has the support of 83% of citizens surveyed by LocalCircles.

Given the intensity of the second wave, with higher risk of patients needing hospitalisation and intensive care, vaccination is the primary way to fight the pandemic. While going to a Government vaccination center is an option for people, many are used to visiting private hospitals for their needs, In this situation, citizens should not be overcharged for vaccination and should be encouraged in all possible ways to take the jab. By State Governments capping service charge for COVID vaccination and prohibiting registration fee and the Central Drugs Standard Control Organisation (CDSCO) making MRP mandatory on COVID vial will ensure that there is increased transparency and citizen trust in the vaccine pricing and the vaccination process.

LocalCircles will be escalating the findings of this survey to all State Governments, Ministry of Health & Family Welfare, Department of Pharmaceuticals and National Pharmaceutical Pricing Authority.

Over 35,000 responses were received from 15,000+ citizens residing in 304 districts of India. 67% of the participants were men while 33% were women. 43% respondents were from tier 1 districts, 31% from tier 2 and 26% respondents were from tier 3, 4 and rural districts. They survey was conducted via the LocalCircles platform and all participants are validated citizens who had to be registered with LocalCircles to participate in this survey.