January 27, 2021, New Delhi: There’s been a varying degree of enthusiasm ever since the inoculation of two vaccines — Covishield and Covaxin —commenced in India on January 16th 2021. So far, close to 20 lakh frontline health workers in India have been inoculated with any of these two vaccines, while less than 1000 adverse events have been reported. India’s vaccination drive has also been the fastest with over 10 lakh or 1 million vaccines administered within the first 6 days. The United Kingdom took 10 days to reach the million mark while it took USA 18 days to reach the same milestone.

Since October 2020, LocalCircles has been collecting responses from citizens to know their approach on taking the COVID-19 vaccine, aimed to understand if the percentage of reluctance or hesitancy has increased, reduced or remains unchanged along with reasons for hesitancy. The last LocalCircles vaccine hesitancy survey released on January 19th 2021, indicated that 62% of citizens were still hesitant to COVID-19 vaccine immediately. These majority of respondents in the survey maintained that they are worried about side-effects, or not sure about its efficacy. Even a survey amongst healthcare professionals in India indicated that 55% will either defer the vaccination or haven’t yet decided what to do. In a bid to drastically reduce fears surrounding over side effects and efficacy of these two vaccines, the Prime Minister of India including many Chief Ministers and Members of Parliament above 50 years of age are likely to take the vaccine in the second phase of the drive around May 2021.

Amid all developments, LocalCircles has conducted another survey to measure the change in the last one week. The survey received approximately 17,000 response from citizens located in over 213 districts of India.

When people were asked about their willingness to take the vaccine immediately, 36% of citizens said they have already taken either of Covishield or Covaxin vaccine or will take it. There were also 4% who said to take the vaccine whenever it is available via private hospitals or channels. Further breaking down the poll, 28% of citizens said they will wait up to 3 months and then decide, 16% said to wait 3 to 6 months, 7% said 6 to 12 months, 3% said will wait more than 12 months and then decide in 2022, while 6% said they will not take it at all. This indicated that 60% of citizens are still hesitant to take it immediately.

Though COVID-19 vaccine now being administered to frontline workers across India, 60% citizens still hesitant to take it immediately 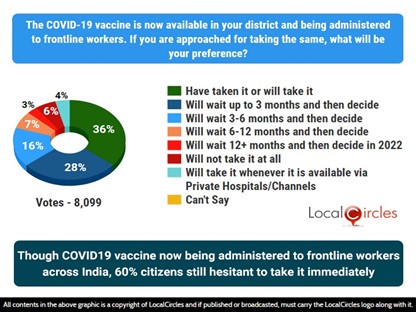 In October 2020, LocalCircles survey indicated that 61% of citizens were hesitant in getting the vaccine. This percentage reduced to 59% in the November survey. Thereafter, the uncertainty over side-effects and efficacy of vaccines vis-a-vis reports of adverse events during its trial, started to startle many citizens. The percentage of hesitant citizens then rose to 69% in the December survey, and was maintained till the first week of January. From January 16th, the Government of India began COVID-19 vaccination, starting the inoculation with frontline workers. The percentage of hesitant citizens declined from 69% in first week of January to 62% during the week of Jan 18th to 60% during the week of Jan 25th.

Though COVID vaccine is now a reality, only minor decline in hesitancy with 60% citizens still hesitant 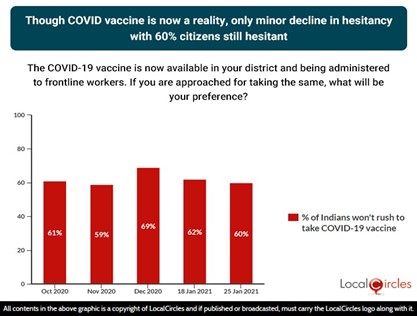 The percentage of citizens saying "side effects not known" as their primary reason to be hesitant to take COVID-19 vaccine immediately continues to be in the high fifties. 59% of those hesitant cited it to be their reason for hesitancy while 14% said that uncertainty around the efficacy of vaccines is why they were hesitant. 4% said that they don’t need the vaccine because Covid is going away anyways and 4% believe that the current vaccine may evade upcoming strains of Coronavirus and hence they were hesitant. 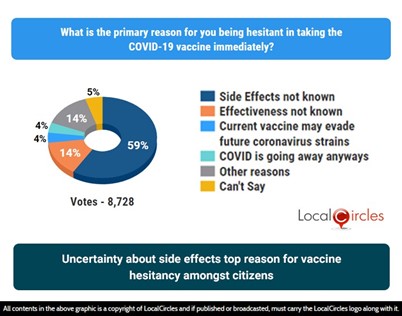 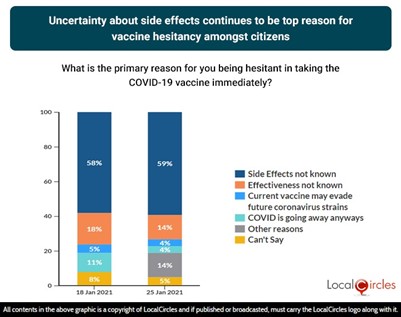 Based on inputs received on the ground from healthcare professionals, one of the key reason for hesitancy has been their inability to pick which vaccine they can take. Many seem to be reluctant to take Covaxin as the Phase 3 trial data is yet to be released for the vaccine.

To summarise, while the vaccine hesitancy is slowly declining, 60% citizens being hesitant is still a significant number. The key in building citizen confidence will be transparent sharing of vaccination and adverse events data at national, state and district levels. Despite LocalCircles highlighting this since November, the same is not available easily to the commoners. Whether through a website or a mobile app, such data must be made available to the collective with option to drill down on adverse event information. Also, as more data about the vaccines becomes available the same must be published in a transparent manner.