January 19, 2021, New Delhi: On January 16th, 2021, the Prime Minister of India virtually launched the world’s largest COVID-19 vaccination drive, with healthcare workers in the country as the first to be inoculated with one of the two COVID-19 vaccines – ‘Covishield’ developed by Oxford-AstraZeneca via Serum Institute of India (SII), and ‘Covaxin’ developed by Bharat Biotech and Indian Council of Medical Research (ICMR). The drive aims to first inoculate millions of its healthcare and frontline workers and reach an estimated 3 crore people by the end of its first phase. Over 3 lakh citizens have already received the vaccine.

Since October 2020, LocalCircles has been collecting responses from citizens to know their approach on taking the COVID-19 vaccine, aimed to understand if the percentage of reluctance or hesitancy has increased, reduced or remains unchanged along with reasons for hesitancy. 61% of citizens in the October survey expressed hesitancy in getting the vaccine. With vaccine makers – Pfizer and Moderna – announcing success on efficacy results, the aggregate percentage of citizens in India hesitant about the vaccine reduced to 59% in the November survey. However, with one adverse event being reported for the Oxford-AstraZeneca-Serum vaccine and concerns about the trial process with one of Bharat Biotech partners the number rose to 69% and was maintained will the first week of January. Now with vaccination commencing and a few days of data and experiences available, LocalCircles conducted another survey to evaluate if public acceptance of the COVID-19 vaccines have changed. The survey received over 17,000 responses from citizens located in 230 districts of India.

Though COVID-19 vaccine is now available, 62% of citizens hesitant to take it immediately

The question asked citizens about their willingness or hesitation to take the COVID-19 vaccine with it now being available in most districts of India. Of 8,658 responses, 32% said they will take it, and 6% said they will take it whenever it is available via private hospitals/channels. Further breaking down into the poll, 22% said they will wait up to 3 months and then decide, 14% said will wait 3 to 6 months, another 14% said will wait 6 to 12 months, while 3% said they will wait more than 12 months and then decide in 2022. The survey result indicated that 62% citizens are still hesitant to take it immediately. Per comparison with the previous surveys conducted by LocalCircles, there has been 10% decline in the percentage of citizens hesitant to take the vaccine from December and early January. This may be largely due to the fact that people have watched and read about the vaccination drives kicking off in their own districts. Also, of the 2 lakh plus jabs administered in the first two days, only 450 or adverse events were reported.

Though COVID-19 vaccine has now become available, 62% citizens hesitant to take it immediately 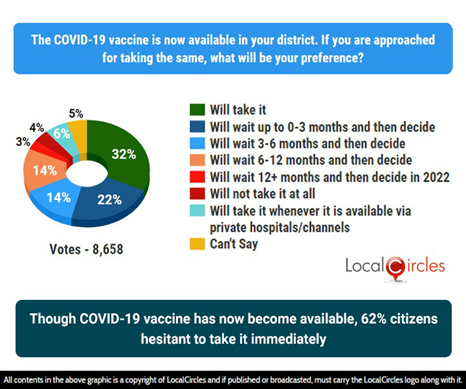 As the COVID-19 vaccine becomes reality, hesitancy drops by 10% 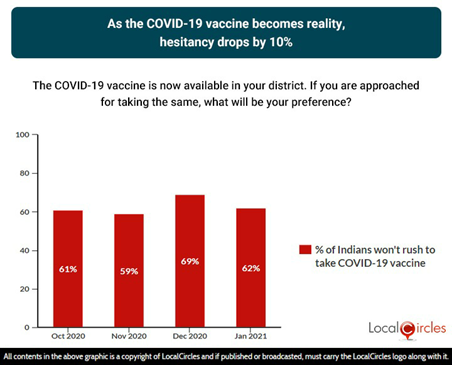 To follow on the first question, LocalCircles then asked those hesitant citizens about the key drivers of their inclination to not take the COVID-19 vaccine as soon as it becomes available for them. The following question asked citizens, "What is the primary reason for you being hesitant in taking the COVID-19 vaccine immediately?" Of 8,782 responses, 59% of citizens pointed unknown side-effects as the primary reason for them to avoid the taking any of the vaccine as of now, while 18% voted for "effectiveness unknown". There were also 5% of citizens who believe that the current vaccine may evade future coronavirus stains while 11% citizens believe COVID-19 is going away anyways to why the vaccine. 8% of those hesitant could not elaborate why they were hesitant. 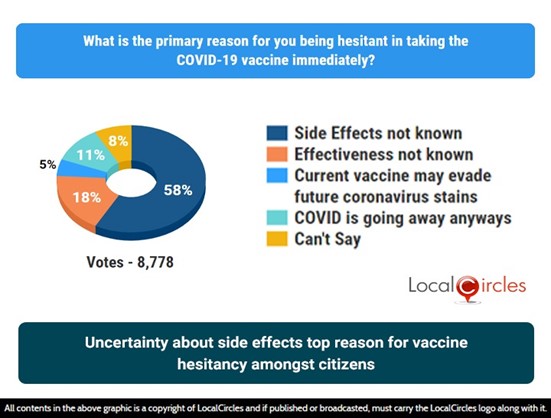 The LocalCircles survey indicated that vaccine hesitancy concerns among citizens continue to persist despite the vaccination process beginning, although there has been 10% decline in the percentage of citizens hesitant, from 69% in December 2020 to 62% in January 2021.

Unknowns on the side effects front continue to be a key concern amongst people and top reason for hesitancy. In Bhopal, for instance, in early January, a 42-year-old volunteer died nearly ten days after he participated in the clinical trial for Covaxin via a private hospital People’s Group, with Bharat Biotech maintaining that the individual died of poisoning independent from the vaccine. Many other volunteers in Bhopal have also come forward alleging Covaxin is causing them various ailments after participating in the trial. Earlier in late November a trial volunteer for Serum-Oxford-AstraZeneca came out alleging that they had a severe adverse event post the vaccine. Efficacy is another concern reported by people with 18% of those hesitant calling it out as a key reason. While the efficacy level of Covishield is claimed to be 62% when two full doses were given 4 weeks apart; however, the efficacy is not known for Covaxin. Those taking Covaxin must sign a consent form stating that the efficacy is yet to be established. Such unknowns seem to be denting the confidence of a group within those hesitant. 11% citizens in the survey say they won’t take the vaccine because COVID-19 is going away anyways. With COVID-19 daily case load reducing by almost 300% in last 4 months from 90,000 in September to 15,000 in January and now majorly concentrated in 3 states, some tend to feel why vaccinate now when COVID-19 cases are not happening. Over 400 districts across the country are now reporting less than 20 cases a day. About 5% of the respondents believe that new coronavirus strains like E484K or B.1.1.7 may evade the current vaccine and hence they must not rush into taking the vaccine. While Pfizer has claimed that its vaccine solves for the B.1.1.7 strain, scientists have reported that E484K strain found in Brazil is found to be neutralising COVID antibodies and hence may require an update to the existing vaccines for them to be effective against it.

As the Government continues with vaccination drive, LocalCircles believes that national, state and district level dashboards must be made available and popularised amongst the masses with information on total vaccinated, adverse events reported and their details be made available to people on fingertips. Such steps will help build the confidence of people and address their hesitancy. The fact that scientists, world over and in India have been able to develop a vaccine in less than 12 months is truly amazing and a first in its kind. By making all possible information available transparently and easily, the Government and the vaccine makers can address concerns of the population currently hesitant and get them onboard in fight against COVID-19.