The flu wave: 10% households in Uttar Pradesh have 1 or more members who are currently down with flu-like symptoms

August 20, 2021, New Delhi: Quite a few Uttar Pradesh residents in the last 7 days have reported on LocalCircles that someone in their family are struggling with COVID like symptoms i.e. fever, runny nose, fatigue etc. and some have been checking with the larger community about what is prevailing. Some are also getting a RT-PCR test done only to find later post doctor consultation that they are COVID negative and had gotten under the influence of some kind of viral infection or seasonal flu. The COVID-19 test positivity rate in Uttar Pradesh has come down to 0.01%. To understand the magnitude of the spread of this flu, LocalCircles has conducted a survey amongst residents of Uttar Pradesh, which received more than 6,000 responses from residents across 51 districts of Uttar Pradesh. 68% of the participants were men while 32% were women. 47% of respondents were from tier 1 districts, 31% from tier 2 and 22% respondents were from tier 3, 4 and rural districts. 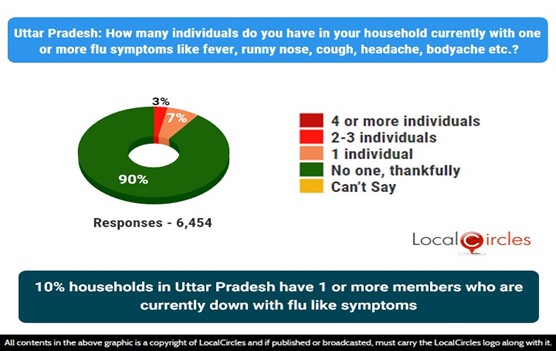 The findings of the survey indicate that 10% of Uttar Pradesh households surveyed have 1 or more members who are currently down with the flu-like symptoms, while 7% have only 1 member so far and it is likely that more members may develop symptoms in the days to come. 90% of citizens have indicated that they do not have anyone in their households with the flu-like symptoms, however, they are advised to take all precautions when using public transport, visiting public places and at workplace.

Within the state of Uttar Pradesh, Ghaziabad and Noida (Gautam Buddha Nagar) districts reported the highest instances with 23% respondents from Noida claiming to have one or more person in the household impacted by it while 17% respondents from Ghaziabad claimed to have one or more in the family experiencing flu symptoms. Most other locations had single digit percentages indicating that NCR cities of Uttar Pradesh are likely experiencing the surge because of their proximity to Delhi. 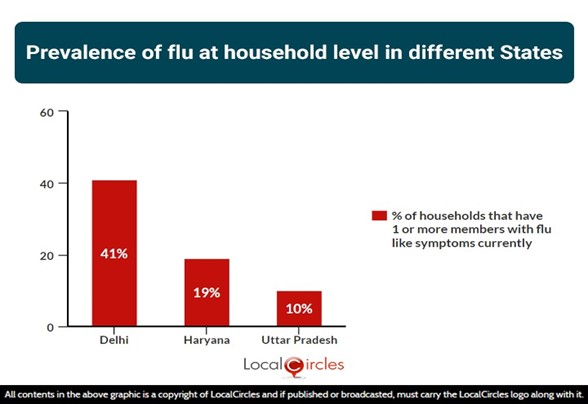 If the responses are compared across the states of Delhi, Haryana and Uttar Pradesh, Delhi is currently seeing the highest impact of this flu with 41% households having one or more member having symptoms like headache, fever, runny nose, fatigue etc. while in Haryana the prevalence is around 19%. However, the cities of both Haryana and Uttar Pradesh that are near Delhi are experiencing higher instances than those that are away from Delhi.

The survey conducted amongst residents of Uttar Pradesh received more than 6,000 responses from residents across 51 districts of Uttar Pradesh. 68% of the participants were men while 32% were women. 47% of respondents were from tier 1 districts, 31% from tier 2 and 22% respondents were from tier 3, 4 and rural districts. The survey was conducted via LocalCircles platform and all participants were validated citizens who had to be registered with LocalCircles to participate in this survey.