62% parents say even if Government reopens schools on Sep 1, they will not be sending their children

August 24, 2020, New Delhi: India’s daily case load for COVID-19 has now reached 70,000 cases and is now highest in the world by a margin of over 40%. With close to 400 districts with 1000 total cases, COVID-19 is fast spreading into tier 3, 4 towns and rural India. In the LocalCircles survey in late July, 31% citizens said that they had one or more COVID-19 positive cases in their social network.

The Central Government is now in the process of finalizing the guidelines for the fourth phase of the unlocking, which are set to come into effect from September 1st. LocalCircles conducted a survey to understand what citizens feel about opening of multiplex and movie theaters, metro or local trains and most importantly, schools. The survey received over 25,000 responses from citizens residing in 261 districts of India.

In the first question, citizens were asked if the Government decides to restart metro/local trains from Sep 01, 2020, will they be taking them in the next 60 days. 36% answered in a ‘yes’ while 51% answered in a ‘no’. 13% were unsure about it. 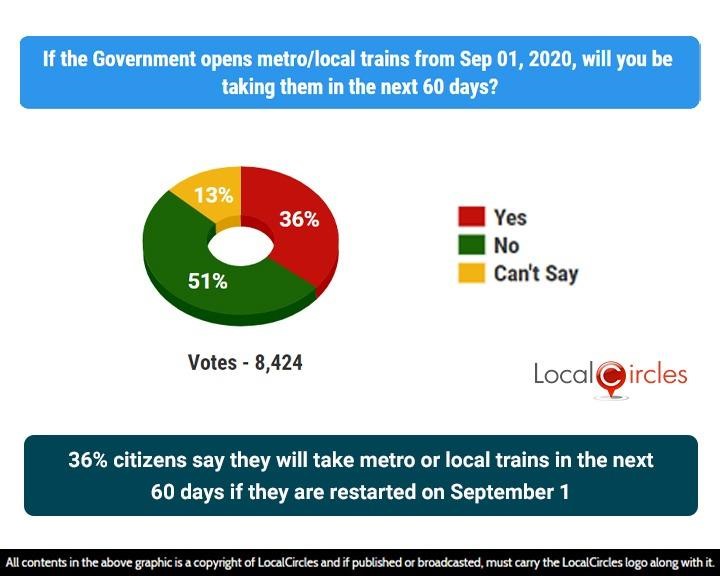 In the LocalCircles survey conducted in July, 29% citizens had said that they will travel by metro if the Government decides to restart it and in one month, this number has increased to 36%. Metro trains have been the lifelines of the major Indian cities like Delhi, Mumbai, Kolkata etc., with millions of people using the service every day. With more and more areas opening up and people starting to travel more, they are facing major commuting problems due to the non-operational metro services. Many citizens are requesting that metro/local be started again with SOPs defined for social distancing, face masks etc., to prevent the further spread of COVID-19. 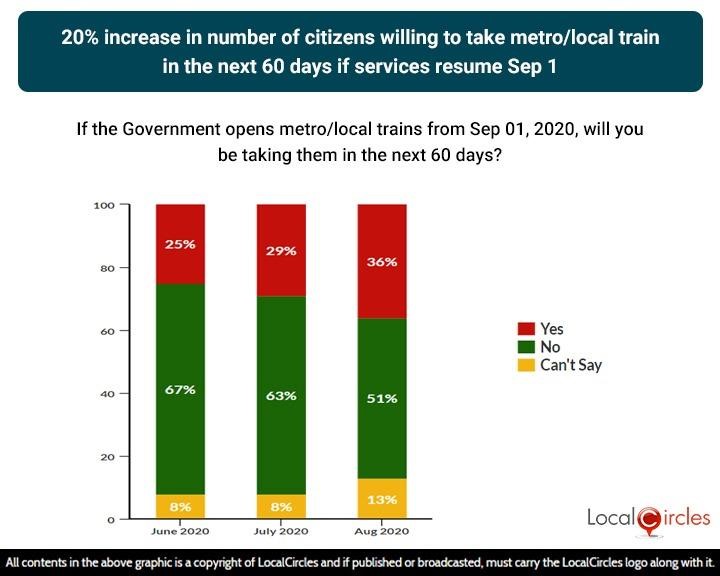 After opening restaurants, gyms and malls, the Government is considering reopening multiplexes and movie theaters in the next phase of 'unlock' guidelines, slated to be issued by August-end. Citizens have continuously been opposing the reopening of movie halls as they could lead to an increase in spread of COVID-19. Per global experts, Central Air Conditioning systems can accelerate the spread of the virus and hence are extremely risky given such a high percentage of India’s population has been asymptomatic while carrying the virus. While multiplex and theater owners have requested the Government to allow them to function again as their business is suffering huge losses, it is just extremely risky.

Only 6% citizens willing to visit multiplexes and theatres to watch movies in the next 60 days, if they open on September 1 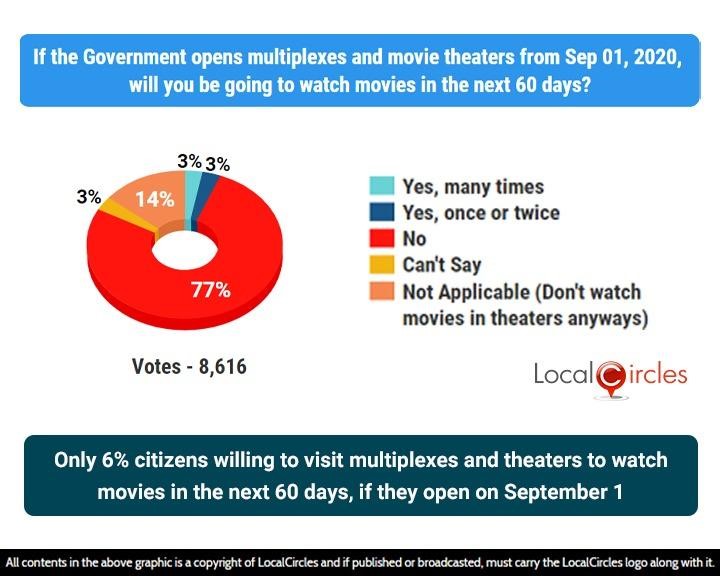 The comparison with last month’s survey shows that citizens favouring opening of multiplexes and movie theaters is not increasing like in the case of metro and local trains. an increased number of people are not in favour of reopening theatres and multiplexes. 77% citizens in August compared with 72% in July, said that they will not visit multiplexes or movie theaters in the next 60 days. 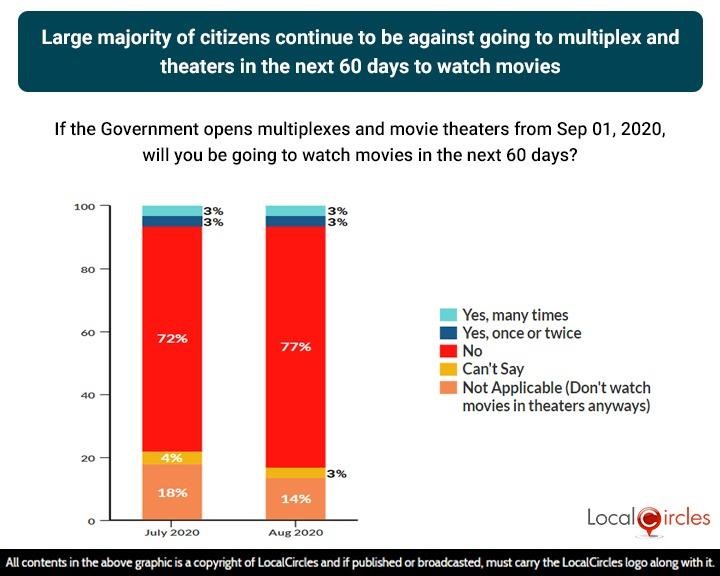 Two weeks ago, in a LocalCircles survey only 33% parents said that they supported reopening of schools. Majority of the parents were against opening schools because of the risk factors, impractical social distancing in schools and the risk of spread to senior citizens in the family.

As the Government decides on whether schools should be reopened for senior classes, LocalCircles asked parents that if the Government does go ahead and announces opening of schools from Sep 1 for senior classes and others thereafter, will they be sending their children/grandchildren to school. 62% answered in an outright ‘no’ while only 23% answered in a ‘yes’. 15% parents were undecided.

62% parents say even if Government reopens school on Sep 1, they will not be sending their children 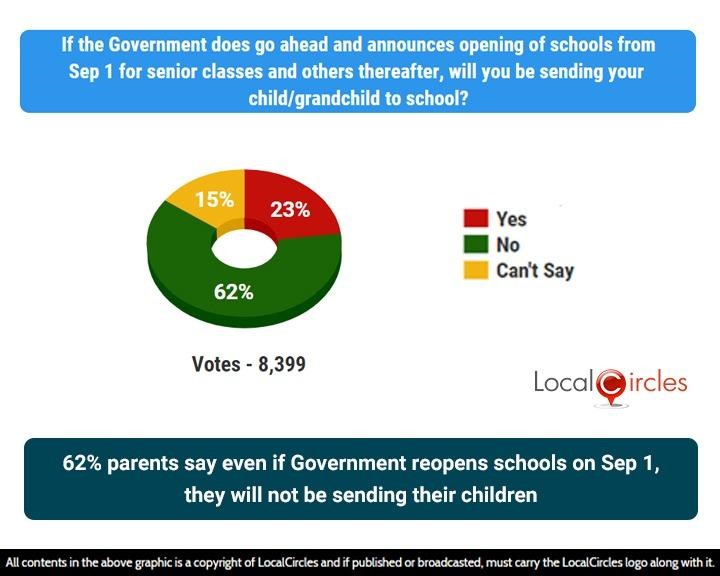 Given the fact that the COVID-19 situation isn’t improving and numbers are only rising, this number has now reduced from 33% to 23% within 2 weeks. This indicates that even if schools open up physically, a large majority of parents will refrain from sending children to school and continue with online education instead.

Case studies from many countries including USA where 97,000 children came down with COVID-19 within 2 weeks of school reopening and just in Berlin, Germany, 41 schools reported children or teachers getting infected last week. All of these are causing concerns amongst parents. Most parents are of the view that India shouldn’t even consider reopening physical schools till Dec 31st and instead the focus of Central an State Governments should be on equipping schools for online education, television or radio based classes directly or in alliance with industry through the CSR programs.

In summary, the findings of the survey indicate that many people now want the metro train and local train services to be restarted so that their daily commute become a bit easier. However, majority are still not in favour of schools and movie halls being reopened as it would increase the risk of infection.

LocalCircles will submit these findings to senior officials of Central Government and various state Governments, so that the final decision for unlocking can be taken keeping the public pulse in mind.