Eating and Ordering Healthy: 77% consumers surveyed in favour of Front of the pack Red Label to identify Ultra Processed Foods 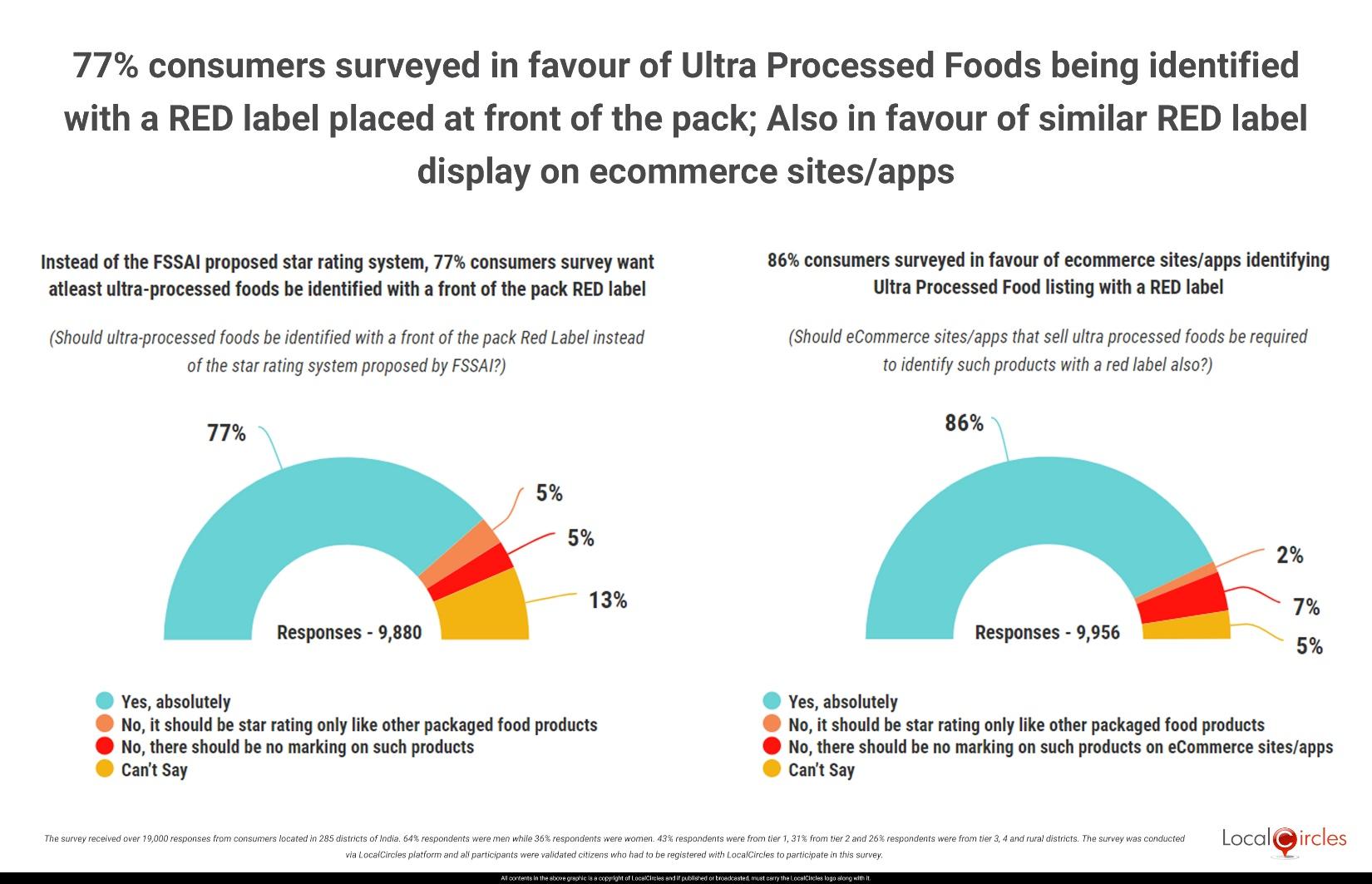 January 12, 2023, New Delhi: In August 2020, Prime Minister Narendra Modi had spoken about the importance of children eating nutritious diet in his monthly programme Mann ki Baat. More than two years later, the Food Safety and Standards Authority of India (FSSAI) and a number of think tanks working with it are still to finalise the draft proposal on the star rating system planned to identify High Fat, Sugar and Salt foods (HFSS) with many of them also being classified as Ultra-Processed foods.

Last year in September, FSSAI had proposed an Indian Nutrition Rating for FoPL to rate the overall nutritional profile of the packaged food and assign it a score ranging from half star to five stars. The draft proposal was open to public comment till Nov 19, 2022. FSSAI has again invited comments from health experts and consumer organizations to further address concerns about proper labelling of packaged foods. Based on study of the system in other countries, consumer research has revealed that colour coded labelling of packaged food outperform other labels in helping consumers make an informed food choice about the packaged food they plan to consume.

Ultra-processed foods, which are known to adversely impact the health of all categories and age groups of people, are defined within the NOVA (new) classification system as groups of foods according to the extent and purpose of industrial processing, rather than in terms of nutrients. Processes and ingredients used to manufacture ultra-processed foods are designed to create highly profitable (low-cost ingredients, long shelf-life, emphatic branding), convenient (ready-to-consume), hyper-palatable products liable to displace all other NOVA food groups, notably unprocessed or minimally processed foods.

A research article co-authored by Trish Cotter and published online in BMJ Case Reports suggest that a practical way to identify an ultra-processed product is to check if its list of ingredients contains at least one item characteristic of the NOVA ultra-processed food group - either food substances never or rarely used in kitchens (such as high-fructose corn syrup, hydrogenated or interesterified oils, and hydrolysed proteins), or classes of additives designed to make the final product palatable or more appealing. This could include flavours, flavour enhancers, colours, emulsifiers, emulsifying salts, sweeteners, thickeners, and anti-foaming, bulking, carbonating, foaming, gelling and glazing agents. A research report, based on analysis of more than 10,000 food and beverage products currently available in the Indian food market, had revealed in December 2021 that about 68% of them have excess amounts of at least one ingredient of concern whereas 32% are within the scientific thresholds recommended WHO regional standards. The study by All India Institute of Medical Sciences (AIIMS) and the University of North Carolina at Chapel Hill (UNC) had analyzed 10,500 products that had provided complete nutrition information in the nutrition facts panel.

Two studies published last year in American Journal of Preventive Medicine and Neurology have found that consumption of ultra-processed foods can be detrimental to health. The first study has concluded that they can contribute to 10% of death among people aged 30-69 years, while the second study has warned that 10% increase in consumption of such foods can raise the risk of dementia.

The subject of how HFSS foods should be labelled on the pack has been a subject of great interest to many Indian consumers and has been actively discussed on LocalCircles in 2022. In an April 2022 survey on the subject, 7 in 10 consumers were in favour of FoPL in Red, Green or Orange colours based on their sugar, salt and fat content while 2 in 10 consumers favoured a star rating system. 1 in 10 surveyed did not want any labels. The same was escalated to FSSAI and Ministry of Health & Family Welfare for consideration and implementation in April and once again in November last year. With the subject continuing to get feedback from consumers, especially discontent against the star rating system in the regulation draft issued by FSSAI in September, LocalCircles conducted another survey focusing on ultra-processed foods and identifying them with a RED Front of the pack label even if FSSAI were to implement its proposed star rating system. With rapid ramp up of online or ecommerce grocery platforms and lately quick grocery delivery apps, this latest survey also asked consumers about how ultra-processed foods should be identified on ecommerce platforms where the packet isn’t in the hands of the consumer or fully visible to them. The survey received over 19,000 responses from consumers located in 285 districts of India. 64% respondents were men while 36% respondents were women. 43% respondents were from tier 1, 31% from tier 2 and 26% respondents were from tier 3, 4 and rural districts.

Instead of the FSSAI proposed star rating system, 77% consumers survey want atleast ultra-processed foods be identified with a front of the pack RED label

The first question in the survey focused on how identification of ultra-processed foods should be done on the package. It asked respondents, “Should ultra-processed foods be identified with a front of the pack Red Label instead of the star rating system proposed by FSSAI?” to which 77% of the 9,880 respondents stated “Yes, absolutely”. Only 5% of respondents indicated “No, it should be star rating only like other packaged food products”; and another 5% felt “No, there should be no marking on such products”. In addition, 13% gave no clear reply. 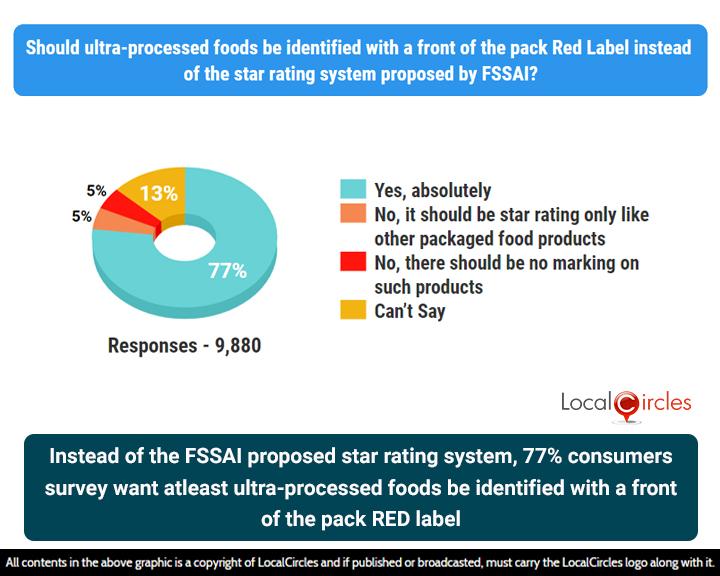 With the pandemic and related lockdowns starting March 2020, many consumers took to ecommerce sites and apps to order their groceries. A large number of platforms like Big Basket, Amazon Fresh, Flipkart Grocery and since 2022 Zepto, Swiggy Instamart, Dunzo, Blinkit, Big Basket Now, etc. now sell packaged foods and groceries and are regularly used by many consumers. However, when consumers are using these platforms, for most of them, the consumer does not have the benefit of full visibility to the product packaging and in most cases just having access to a thumbnail sized image. To ensure the consumers are aware of what they are ordering online, the next question in the survey asked all those who use ecommerce apps to order groceries, “Should e-commerce sites/apps that sell ultra-processed foods be required to identify such products with a red label also?” In response, a majority, 86% stated “Yes, absolutely”. Of the nearly 10,000 respondents to this question, only 2% felt “No, it should be star rating only like other packaged food products”; 7% indicated “No, there should be no marking on such products on e-commerce sites/ apps”; while 5% gave no clear response. From an implementation stand point, respondents suggested that the RED label or a rectangular bar next to the listing could be a way to identify such foods on ecommerce platforms.

The use of the ecommerce apps and especially the quick grocery apps is very high amongst teenagers and youth in large cities and making them aware of ultra-processed foods is the first step to getting them to migrate towards healthier alternatives. 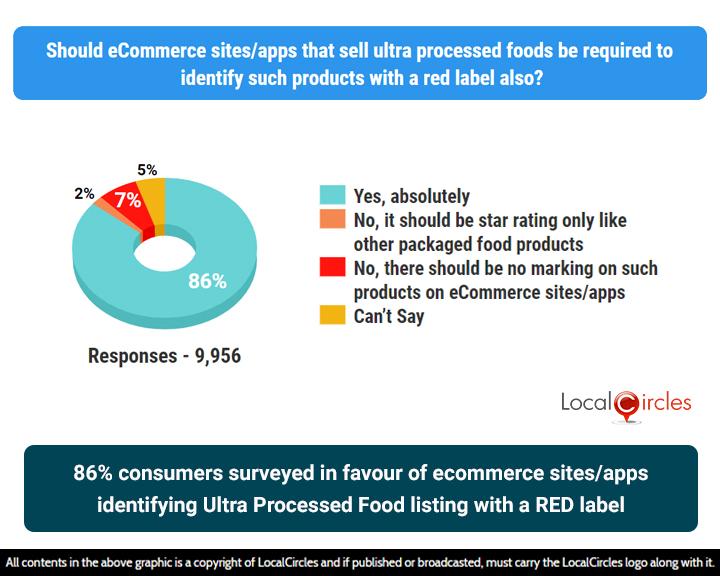 Overall, the importance of having effective labeling cannot be undermined considering the number of people – both children and adults – who consume ultra-processed food, most of which contain high amount of sugar or salt and bad fat ingredients. This consumption has proved to result in an increase in non-communicable disease (NCDs) like obesity as well as worsen conditions, such as diabetes and heart disease. It is estimated that nearly 5.8 million people in India die from NCDs every year out of total deaths of about 9 million. The World Obesity Federation predicts that over 27 million children in India may suffer from obesity by 2030. One of the solutions to address this fast-growing problem is introduction of regulations that will help consumers make informed choices when they are planning to consume ultra-processed foods. The ability to distinguish between healthy and not so healthy packaged and processed foods that contain a high amount of salt, sugar, fat (HFSS) content is thus very vital. The sooner a decision on this is taken and implemented, the better it is for the population.

The survey results confirm that 7 in 10 respondents continue to believe that Front of the pack Label with a colour code is a more effective way than a star rating system to inform and make aware the Indian consumer about what they are consuming. Even if FSSAI were to proceed with its star rating system the latest survey finds that 7 in 10 consumers want atleast the ultra-processed foods to carry a RED label/bar on Front of the Pack for easy identification. Secondly, as a sizable consumer base of ultra-processed food atleast in cities is using the ecommerce sites or apps to order groceries including processed foods without the benefit of full visibility to the package, over 8 in 10 of online shoppers of grocery believe that these ultra-processed foods must be identified with a RED label or bar. If these recommendations are implemented, they will go a long way in many becoming aware of ultra-processed foods and over time migrating to healthier alternatives.

LocalCircles will share the findings of this survey with FSSAI and Ministry of Health and Family Welfare such that collective public feedback on identification of Ultra-Processed foods is taken into consideration as the Front of the pack Label rules are finalized.