March 10, 2022, New Delhi: A final-year medical student Naveen Shekharappa Gyandagoudar (21), aspiring to become a doctor, from India’s Haveri district in Karnataka was killed in the war-torn Ukrainian city of Kharkiv on March 1, in a firing by the Russian forces. He was among thousands of Indians who were stuck in Ukraine. However, the Government of India jumped to quick action and evacuated seventeen thousand students during the first week of March, along with close to 700 students at Sumy University earlier this week.

India faces a testing time with the rapidly escalating war between Russia and Ukraine and has, so far, chosen to maintain a balanced position, though it expressed its displeasure about the Russian actions in the written note. India has also been abstaining from a United Nations Security Council (UNSC) resolution, which called for condemning the Russian military action against Ukraine. Experts maintain that if India sides with Ukraine, this would mean that Russia would no longer feel obligated to honour India’s request of not arming Pakistan as well as veto the Kashmir issue the next time it is raised in the United Nations, and could even end their half a century’s relationship. India also relies heavily upon Russia for arms supplies, technology transfers or the lease of nuclear submarines. On the other hand, India faces more difficult choices with the US and EU nations pushing for a vote at the United Nations General Assembly (UNGA) and having imposed all possible economic sanctions against Russia. India's problem is China, and it needs both the US, EU and Russia to deal with the China problem. India has thus far refrained from supporting any resolution against Russia. Credit Rating agencies like Fitch believe that Russia’s sovereign default is imminent.

After a lot of posts and comments from citizens on India’s current position in regards to the Russia-Ukraine situation, LocalCircles survey released on Feb 28 had indicated that 62% of Indians support GOI’s handling of the Russia-Ukraine situation, which is, however, a decline from 73% per survey conducted on Feb 26. While urging both Russia and Ukraine to come up with a peaceful resolution to the war, India has managed to maintain a delicate position so far, but as long as the war draws on, it will likely be more difficult for GOI to justify its position, especially given the escalating Russian atrocities and attacks on civilians in Ukraine. Taking cognisance of the issue, LocalCircles has conducted another survey to quantify the aggregate citizen pulse on India’s handling of the Russia-Ukraine situation. Multiple data points were undertaken on these questions as the situation developed in the last 12 days. The survey received over 21,000 responses from citizens spread across 341 districts of India. 67% of respondents were men while 33% respondents were women. 42% of respondents were from tier 1, 30% from tier 2 and 28% respondents were from tier 3, 4 and rural districts.

The first question in the survey asked citizens, “How should India be handling the Russia-Ukraine situation going forward?” In response, the majority of 55% of citizens said India should continue “Just like it is doing (not voting on UN resolutions against Russia and requesting Russia to end violence)”. Breaking down the poll, 14% of citizens believe India “Should instead support Ukraine and vote on UN resolutions and support any other sanctions against Russia” while 20% said India “Should continue to not vote against Russia in the immediate term but in the medium/long term move away from supporting Russia”. Only 5% said “None of the above/another approach” while 6% couldn’t say. This question in the survey received 11,129 responses. 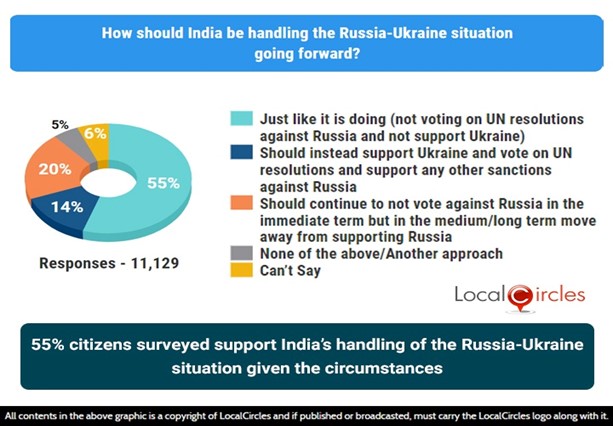 When LocalCircles asked a similar question to citizens on Feb 26th, 73% of citizens said they support India’s handling of the Russia-Ukraine situation of not voting on UN resolution against Russia. This percentage dropped to 62% in the survey conducted on Feb 28th when Russia issued a nuclear threat on the weekend and it continues to decline to 55% this week as Russian atrocities continued against Ukraine. 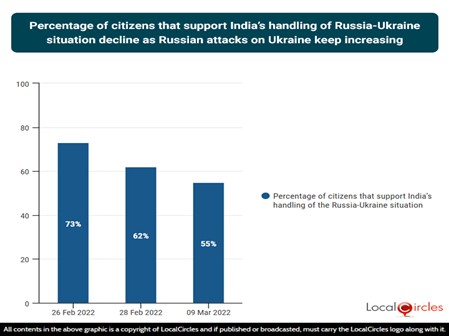 The Government of India has now brought back 17,100 Indians on 83 flights and after a harrowing two weeks, the last group of Indians stranded in the north-eastern Ukrainian city of Sumy have finally been moved towards the central part of the country from where they will be taken in trains to the western border and fly into India in the next 24 hours. Several Indian Government ministers stationed themselves in Ukraine for a week to oversee this evacuation effort. The following question in the survey asked citizens, “According to you, how has the Government of India handled the evacuation of Indian students from Ukraine?” In response, the majority of 59% of citizens said “Exceptionally well”, 18% said “Reasonably well”, and 13% said “Average”. Breaking down the poll, 5% said “Poorly”, 3% said “Extremely poorly”, and 2% did not have an opinion. On an aggregate basis, 77% of citizens gave the Government of India a thumbs up on the evacuation of Indian students from Ukraine. This question in the survey received 10,055 responses. 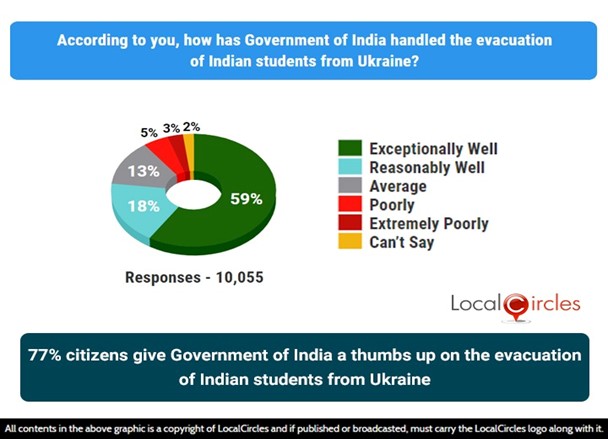 In summary, though there has been a decline in the citizen support level of how the Government of India has handled Russia and the Russia-Ukraine situation, 55% of Indians still support the approach. This percentage stood at 73% on Feb 26th, but as Russia continued its escalations and bombings of all major cities of Ukraine killing many innocent civilians, fewer Indians now support Government’s handling. However, many still supported the Government due to the pending evacuation of some Indians and India’s long-standing trade and defence relationship and dependence on Russia. On the subject of Government handling of the evacuation of stranded Indians in Ukraine, 77% of the citizens surveyed said that the Government of India handled it reasonably or exceptionally well. According to the people of the country, India will have to keep a close eye on the situation, the geopolitical and economic implications and it must be ready to evolve its approach basis the actions of Russia and the approach undertaken by the US, the UK ,and other European nations.