3 years of demonetisation: Citizens identify the expansion of tax net as top positive and economic slowdown & loss of earnings for unorganised sectors as top negatives

LocalCircles conducted a pan India survey to check how consumers are conducting transactions and if they feel that demonetisation had brought any positive changes for the country, which received over 50,000 responses from across India. The first question asked citizens how many of their monthly purchases on an average over the last 12 months have been without a receipt. 39% said 5-25%, 29% said 25-50% and 27% said 50-100%.

3 years of demonetisation: Cash transactions without receipt continue to prevail in India 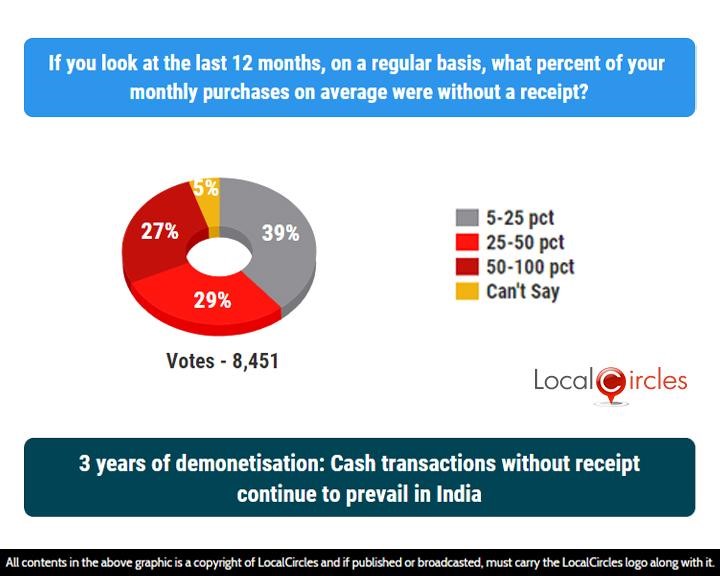 3 years of demonetisation: Though number of transactions may have reduced, cash continues to be core component of property transactions 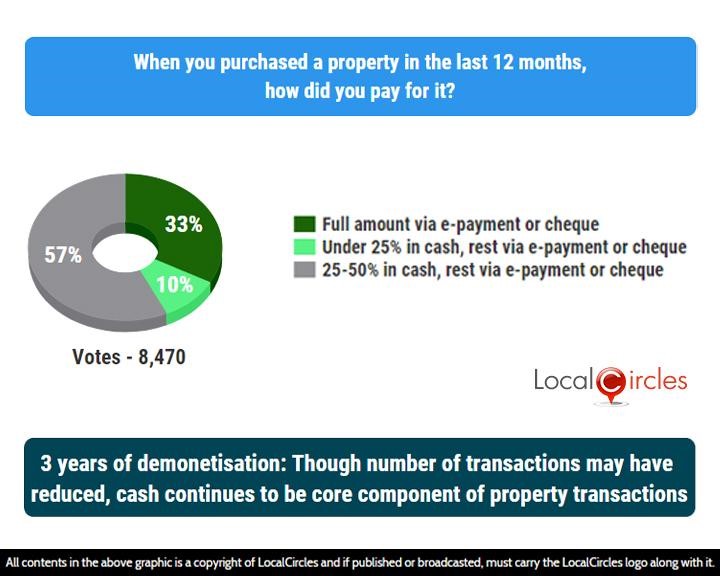 An important goal of demonetisation was to reduce the use of cash in transactions and encourage people to pay using non-cash modes, but the use of cash in the Indian economy does not seem to be reducing. When asked for which category of purchases have they paid the most amount in cash (without receipt) in the last 12 months, 31% said salaries of domestic staff, 36% said groceries, 5% said discretionary purchases & eating out and 7% said property, rent & home repairs. 1% each said jewellery and used vehicles while 7% said they used cash to pay bribes. 12% said they did not make any purchases in cash.

3 years of demonetisation: Majority have paid most amount in cash(without receipt) in buying groceries or making payments to domestic staff 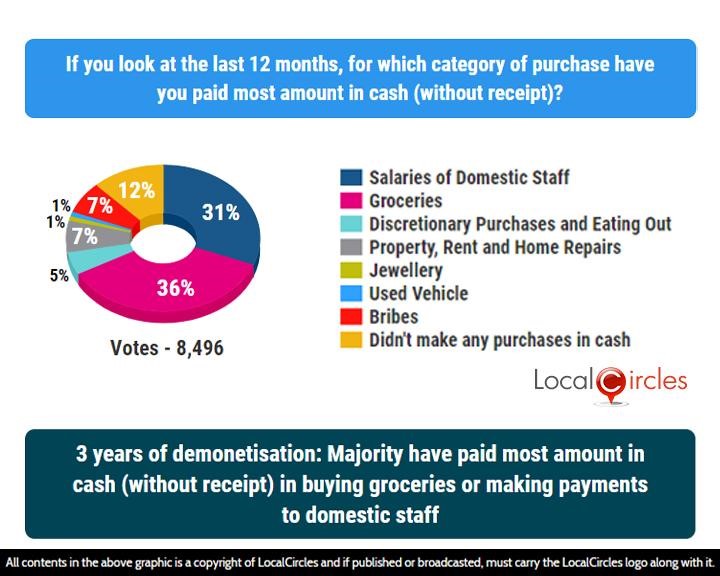 People were asked that 3 years after demonetisation, what do they think was its top benefit. 21% said it reduced black money in the economy and 12% said it increased direct tax collections. 42% said it brought a large number of evaders in the tax net while 25% felt demonetisation had no benefits at all. 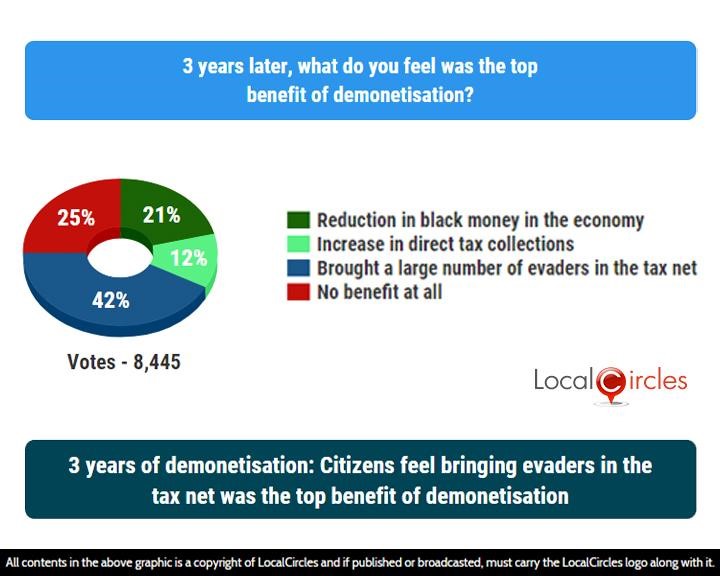 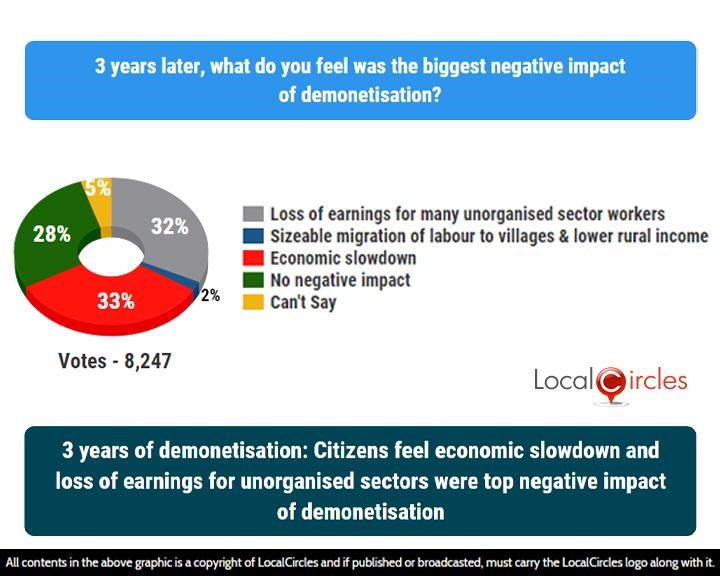 The final question asked what should be the one move that the Government should implement immediately to further reduce black money in India. 29% said linking of all property ownership to Aadhaar should be made mandatory and 11% said Rs. 2000 note should immediately be demonetised. 5% said a 2% transaction tax should be levied on all cash transactions above INR 10,000 while 6% said detailed scrutiny should be done of all individuals with a Swiss Bank account. 42% said disclosure of all assets of all Ministers and Government employees and their families should be made mandatory.

3 years of demonetisation: Most citizens want mandatory disclosure of assets of Public officials and their families and linkage of Aadhar to property owned as solutions to further reduce black money in India 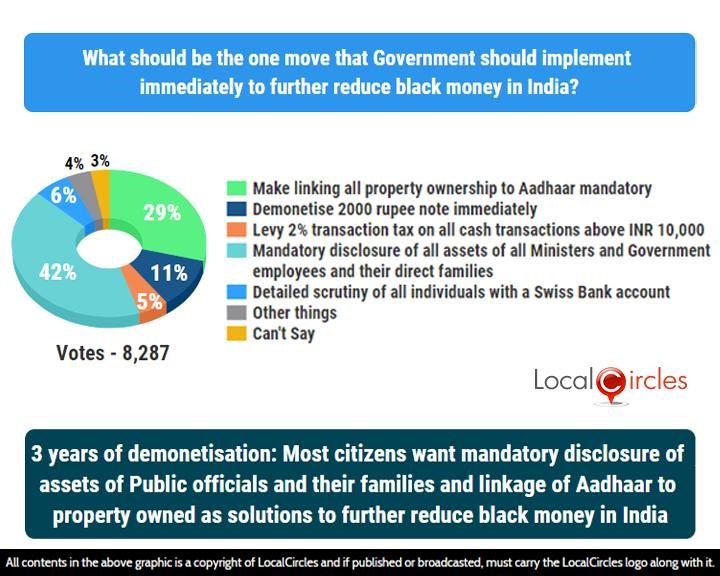 LocalCircles was also able to draw a comparison between the responses received on the demonetisation survey in 2019 as well as 2018. The comparison shows that the percentage of citizens using cash as the primary mode of transaction reduces over 30% from 2018 to 2019.

3 years of demonetisation: Percentage of citizens using cash as primary mode of transaction reduces over 30% from 2018 to 2019 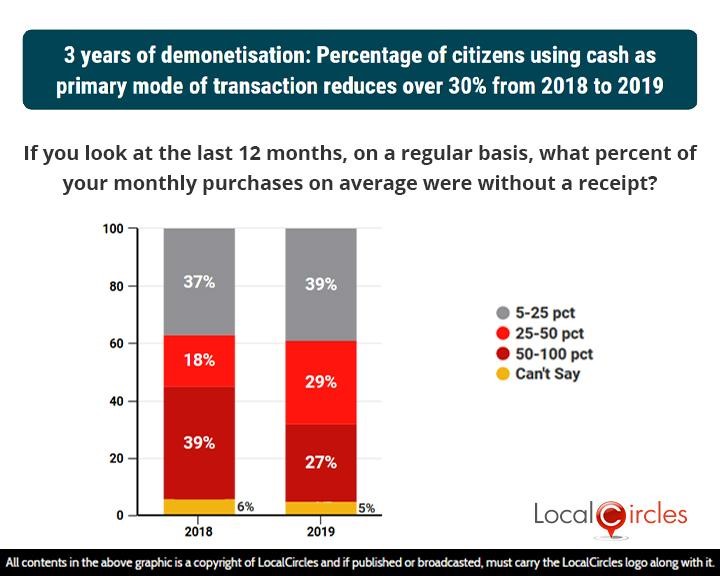 Citizens also admitted to using cash as the primary component in property buying, rose from 2018 to 2019. This may be an indication that the use of black money is now increasing in property transactions.

3 years of demonetisation: Citizens that admitted to using cash as the primary component in property buying rose from 2018 to 2019; may indicate black money use increasing in property transactions 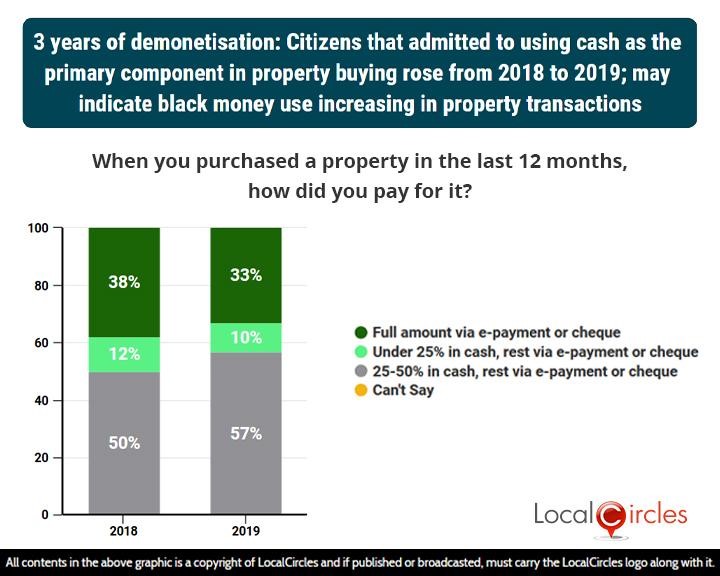 The comparison of the 2 years also shows that the highest number of citizens continue to believe that expansion of the tax net has been the top benefit of demonetisation. 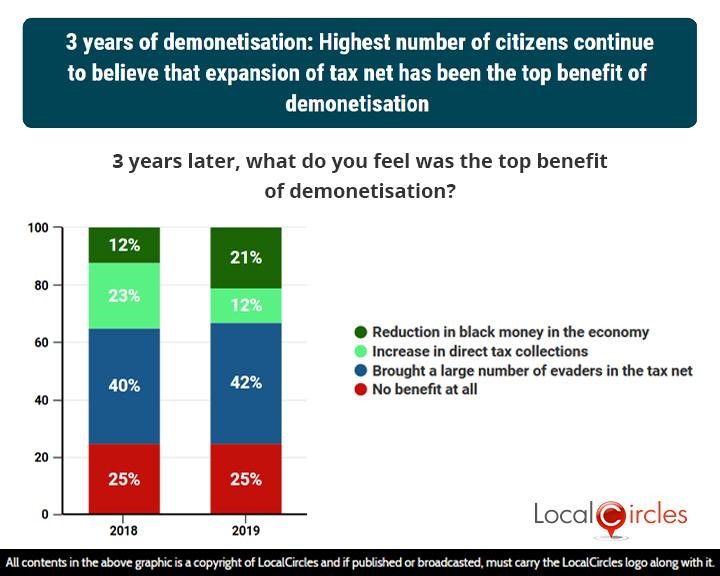 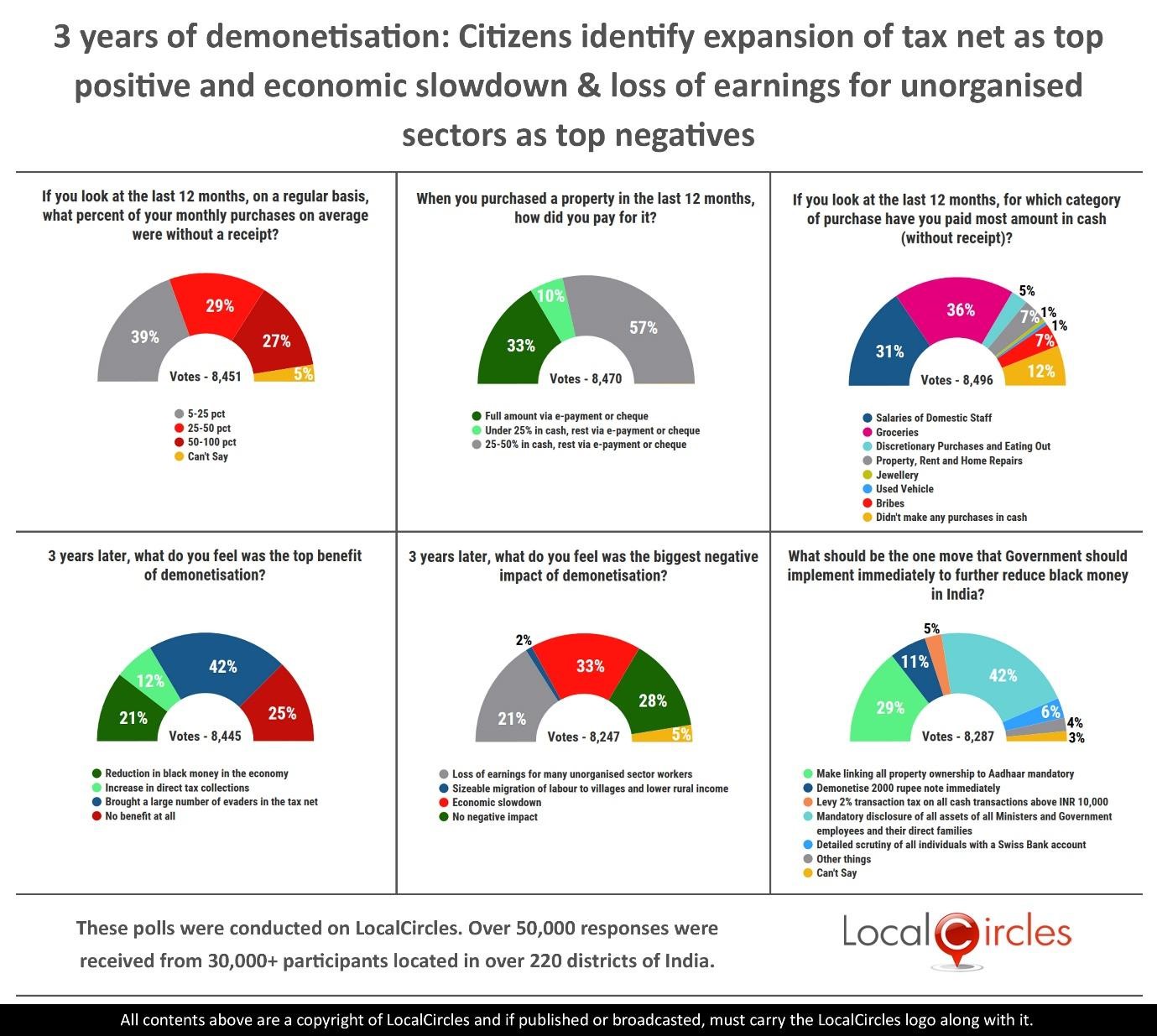