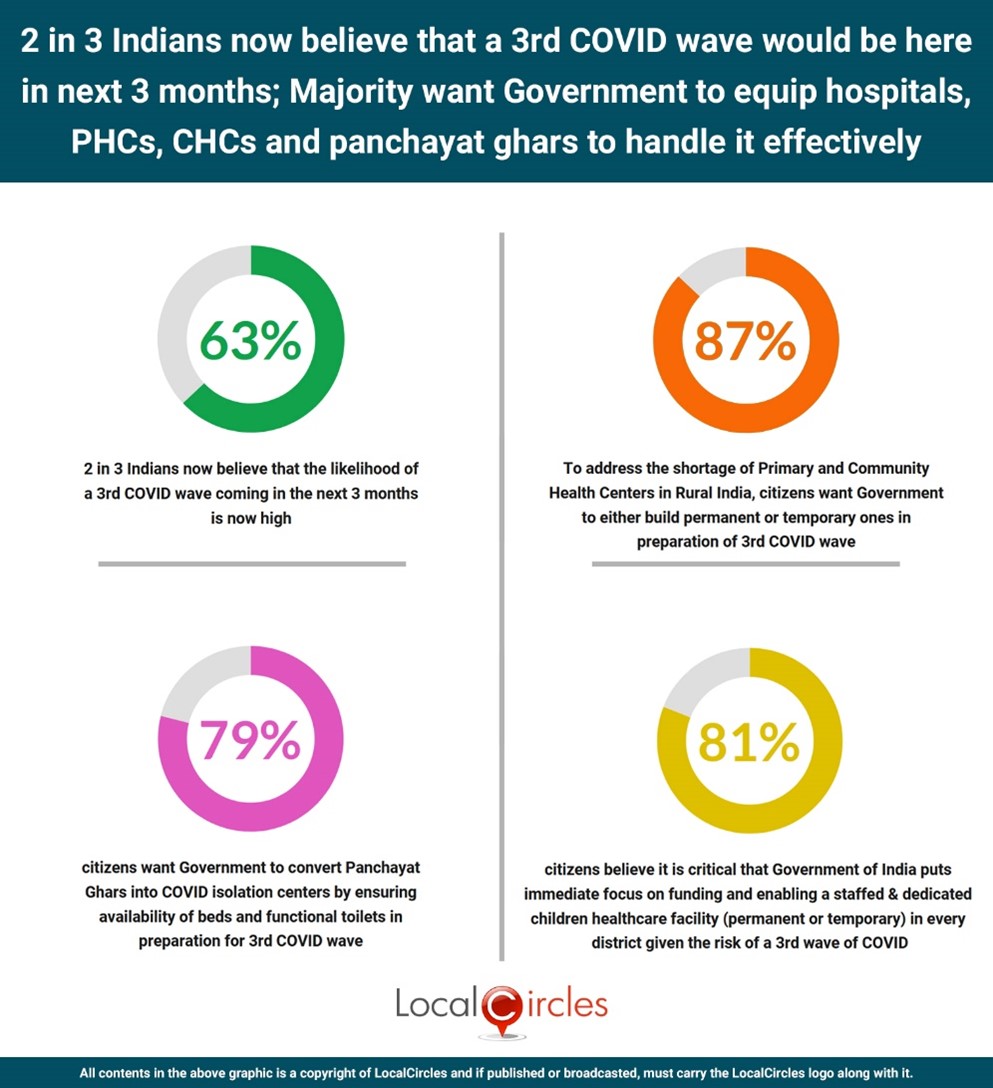 December 31, 2021, New Delhi: India has steadily seen an increase in the daily COVID cases from around 6000 to over 13,000 in the last 2 weeks. The number of individuals infected with Omicron is also rapidly increasing from 20 cases recorded in the first week of December to over 1000 now. The UK is experiencing over 100,000 daily cases while the USA is witnessing an average of 400,000 daily cases with over 500,000 reported on Tuesday. Niti Aayog has indicated that if India sees a scale of Omicron spread like the UK, the country could see nearly 14 lakh cases every day given its population.

The Omicron variant, which has scientists and epidemiologists from around the world raise red flags, was categorised as a “variant of concern” by the World Health Organisation (WHO) in the late-November and it has now been detected in over 107 countries with all major nations included. The latest data suggests that the variant has between 30-50 mutations, with a 3X transmission advantage over the base or alpha variants of COVID. Vaccine efficacy reports against Omicron are also not encouraging with most 2-dose vaccines losing their efficacy thereby relying on the need for a 3rd vaccine dose to protect against Omicron. The 2-dose Covishield-Astrazeneca efficacy has also been reported to be low against Omicron.

The immediate attention should now shift to containing and mitigating the spread vis-à-vis utilising the existing infrastructure to deal with the cases of COVID-19 positive cases, especially arising from rural areas and small towns of India. Concerns also arise over more children being infected by Omicron. As a precautionary measure, health experts have stressed on the need to have paediatric intensive care unit (PICU) beds at both Government and private hospitals, along with COVID beds, ICU beds as well as enhance existing infrastructure, allocate permanent workforce and sustain fundings, among others.

Adequate access to healthcare in rural villages of India has always been scarce. When COVID-19 spread out to-far flung areas of India during the 2nd wave, villagers faced extreme difficulties where it took hours for them to get to the nearby hospital, which is mostly ill-equipped with infrastructure, equipment, medicines, and technically trained nurses and doctors. The Government has recognised Primary and Community Health Centers (PHCs and CHCs) to play a pivotal role as COVID care centers as the first response to villagers’ health needs. Notably, the Centre has started to release funds from COVID-19 Emergency Response & Health System Preparedness Package (ECRP-II package) to states and UTs as funds sanctioned for improving existing health infrastructure, with focus on rural healthcare, as well as ensuring its functionality, adding beds, medical equipment, etc.

Citizens on the LocalCircles platform agree that these steps taken will address the challenges during the 3rd wave of COVID-19 in India. The 2nd wave has already witnessed hospitals and healthcare professionals even in urban cities and metropolitan running out of capacity, due to lack of oxygen cylinders and beds, intensive care facilities, and even medicines and doctors. Taking lessons from the two previous outbreaks, with Omicron now leading the overall COVID cases in India, LocalCircles has conducted a survey to understand the collective pulse of citizens on what actions should be immediately taken up by the Government of India to minimise the COVID spread and related deaths in rural India. The survey received more than 37,000 responses from citizens residing in India. 68% of the respondents were men while 32% were women.

Citizens on the LocalCircles platform have been demanding that preparatory actions be taken immediately so India is equipped to handle the 3rd wave of COVID. The 2nd wave already witnessed hospitals and healthcare centers across the country facing a dearth of oxygen, hospital beds, intensive care facilities, medicines, and doctors while thousands lined up at hospitals for the treatment. To understand exactly how people perceive the likelihood of a 3rd wave coming to India within the next quarter and the actions that must be taken by the Government, LocalCircles conducted a nationwide survey which received more than 37,000 responses from citizens located in 377 districts of India. 68% of the respondents were men while 32% were women.

Many global research labs have come out in the past one week sharing the results of their research, which indicates that 2 doses of the vaccine are insufficient to provide immunity against Omicron and a booster dose of mRNA vaccine is needed for protection against the virus. This is greatly concerning for India as Covishield (Astrazeneca) vaccine accounts for 90% of the jabs given in the country so far. The government has announced a precaution dose for healthcare and frontline workers and senior citizens with comorbidities starting January 2022.

The first question in the survey asked citizens, “With new COVID variants getting identified and cases rising in other parts of the world, high level of non-compliance to COVID norms and no restrictions on movement in India, what is your view of the possibility of a 3rd COVID wave coming in the next 3 months. In response, 28% of citizens said there is a “Very High likelihood”, 43% said “High likelihood”, 17% said “Low likelihood”, and 13% said “Low likelihood”. Only 4% said there is “No likelihood”, and 3% did not have an opinion. On an aggregate basis, 2 in 3 citizens now believe there is a high likelihood of a 3rd COVID wave coming in India in the next 3 months. This question in the survey received 10,158 responses. 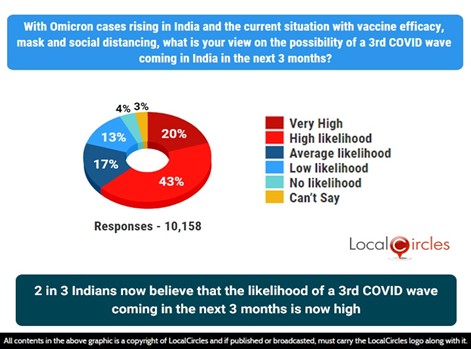 The Union Health Ministry has asked all states and UTs to augment the health infrastructure with special focus on COVID needs as well as COVID positive cases that arise from rural areas. States have also been requested to utilise funds under ECRP package-2 to assess the existing infrastructure in terms of availability of oxygen, ICU beds, oxygen beds, etc. A recent study by Imperial College London has found out that there is “no evidence” that the Omicron is milder than Delta, and that the risk of reinfection with this variant is more than five times higher than the latter. 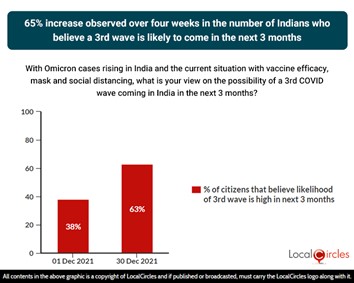 To address the shortage of Primary and Community Health Centers in Rural India, citizens want Government to either build permanent or temporary ones in preparation for 3rd COVID wave

The Government has recognised Primary and Community Health Centers (PHCs and CHCs) to play a pivotal role as the first responders to treat COVID patients. These centers can offer care only for cases that have been clinically assigned as ‘mild’ or ‘very mild’. PHC sand CHCs have been the backbone of rural India’s healthcare system, known for its network of Health Sub Centers, Health and Wellness Centers, working in tandem with the community of health workers such as ASHA (accredited social health activist), ANM (auxiliary nursing midwife), and AWWs (Anganwadi workers). However, according to Rural Health Statistics 2018-19, there is a shortfall of 18% sub centers, 22% primary health centers and 30% community health centers in the country. For many villagers, PHCs and CHCs are inaccessible due to shortage and reach such centers, most of which are in dilapidated condition that rarely opens and are ill-equipped to address even basic illnesses.

Taking cognisance of the shortage of PHCs and CHCs, the first question in the survey asked citizens about what should be done to provide healthcare in rural areas that don’t have primary and community health centers to avert the impact of the 3rd wave of COVID. In response, 42% are of the opinion that the Government “should build PHCs & CHCs on priority.” 45% said it’s “too late for 3rd wave, and the Government should start temporary facilities staffed by doctors, nurse instead.” There were also 10% of citizens who think that “nothing should be done and instead facilities must be created to transport patients to existing health centers “while 3% did not have an opinion. On an aggregate basis, the findings indicate that to address the shortage of Primary and Community Health Centers in rural India, citizens want Government to either build permanent or temporary ones as preparation for the 3rd wave of COVID-19. This question in the survey received 8,883 responses. 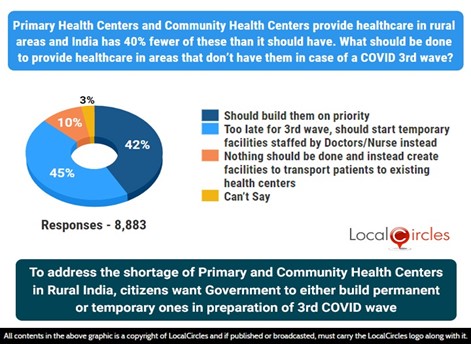 Keeping COVID-positive individuals under isolation is the first response to contain and mitigate the spread among the masses. In rural areas, Panchayat Ghar, a building where the Panchayat meets to discuss its working and perform its functions, was used by many states as a COVID care center in consultation with the nearest health center and panchayat representatives during the 2nd wave. Given that isolation in village homes is nearly impossible, the next question in the survey asked citizens if the Government should create a national mission to convert Panchayat Ghars into isolation centers with basic infrastructures like beds and toilets. In response, 79% of the majority said “Yes”. Only 9% said that it is unnecessary, and 12% of citizens surveyed did not have an opinion. This question in the survey received 8,844 responses. 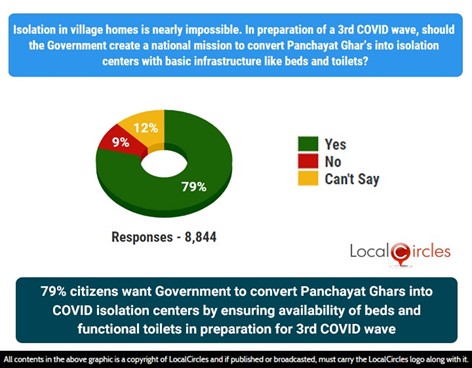 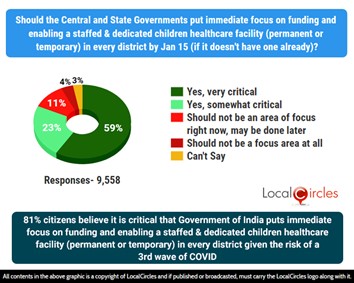 In summary, 2 in 3 citizens now believe that there is a high likelihood of a 3rd COVID wave coming in India in the next 3 months. A survey conducted in early December found 38% of citizens saying that they believe the likelihood of 3rd wave is high in the next 3 months. This percentage has increased to 63%, indicating a 65% increase over 3 weeks in the number of Indians who believe a 3rd wave is likely to come in the next 3 months. Given the scenario, the majority of citizens surveyed think that the Government of India should expedite a project to either build permanent or temporary Primary and Community Health Centers, which will not only address the shortage of these centers across rural areas but can act as the first response to meet the COVID emergency need of the villagers for the future pandemic. Given the isolation need for villagers, 79% of citizens surveyed believe that the Government should create a mission mode initiative to convert Panchayat Ghars into isolation centers with basic infrastructures like beds and toilets. The Government must immediately start a major awareness drive to sensitise rural citizens about Omicron and the importance of adhering to Covid appropriate norms. A well-planned strategy in place that allocates COVID-related infrastructure to the district, block and at panchayat level with defined path for access to hospitals, isolation centers are indeed the need of the hour to minimise the impact of Omicron and the 3rd wave of COVID across rural India. Further, as vaccines remain unavailable to children, 81% of citizens surveyed believe that it is critical that the Government of India puts immediate focus on funding and enabling a staffed and dedicated children healthcare as a precautionary measure. 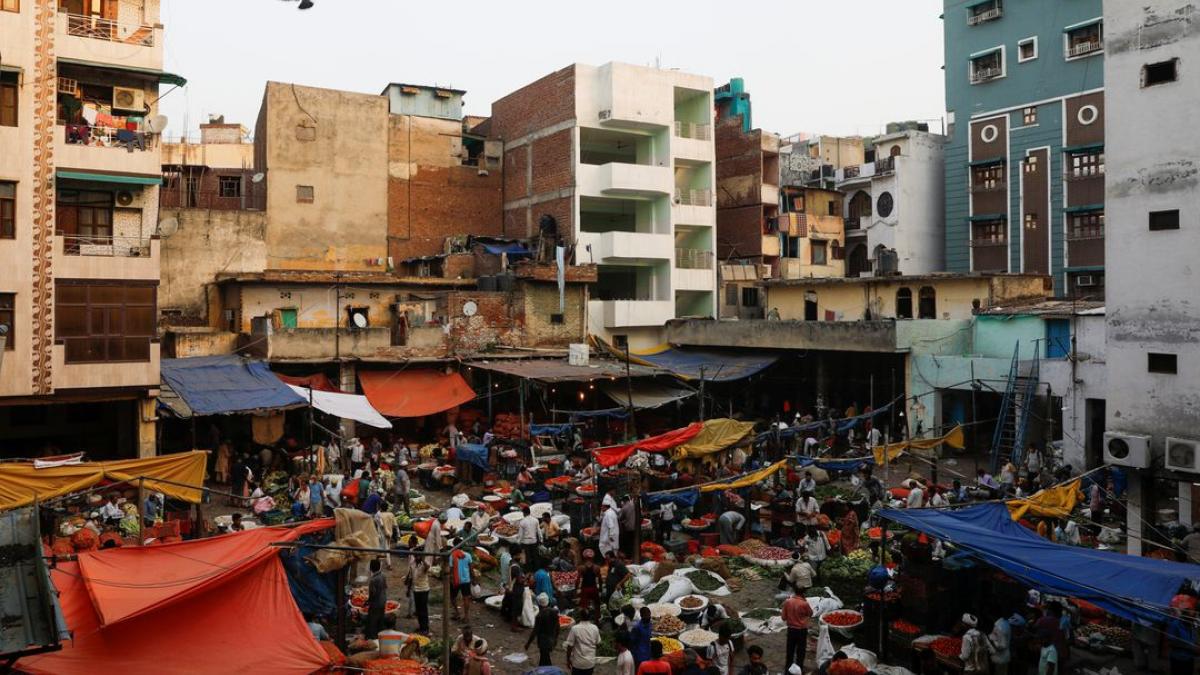 2 in 3 people believe in the likelihood of a third wave: LocalCirclesDec 31, 2021Over 81 per cent of respondents believe it is critical that the government puts immediate focus on funding and enabling a staffed & dedicated children healthcare.