Majority sees marginal improvement in cleanliness due to Swachh Bharat

These local communities work extensively at city level to discuss and engage with local administration. On the completion of two years of Swachh Bharat mission a massive poll covering 14 parameters was carried out by LocalCircles. The objective of the survey was to track the progress of the mission at city, state and national level.

One of primary objective to keep cities clean is to make citizens aware about cleanliness and citizens response to it. This is seen as part of the civic sense of the citizens. The survey shows that 40 % citizens believe that civic sense has improved as a result of the Swachh Bharat’s campaign while 54 % believe it has not improved, where as 6 % were undecided.

After two years the biggest area of concern remains the involvement of the Municipal bodies with Swachh Bharat. 41% citizens believe lack of municipal delivery and enforcement is the biggest bottleneck to achieving cleaner neighbourhoods and cities.

If the city level data is added to the state level we get a comparative picture of 19 states covered by the survey. There are 4 states where citizens say, there has been visible improvement (30% or more improvement in cleanliness). While 11 states show marginal improvement in cleanliness in the range of 10-30%. The remaining 4 states according to citizens have seen no impact of Swachh Bharat. The top four states performing on Swachh Bharat are Andhra Pradesh, Madhya Pradesh, Gujarat, and Maharashtra. The states showing marginal improvement of 10-30% are Tamil Nadu, Kerala, Karnataka, Telangana, Goa, West Bengal, Haryana, Uttarakhand, Orissa, Assam and Rajasthan. The states showing no impact of Swachh Bharat according to citizens include Delhi, Uttar Pradesh, Punjab and Bihar. (The map below captures the state level performance). There are also some cities that have shown visible improvement despite their state only showing marginal improvement. These include cities like Belgaum, Mangalore, Udaipur, Coimbatore, Madurai, Hyderabad, Dehradun and Kolkata. 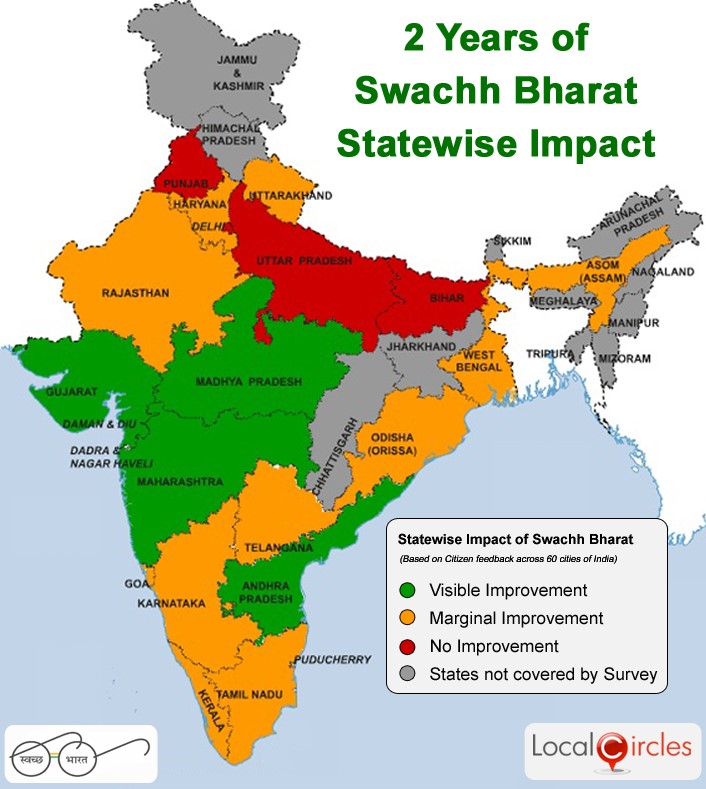 Approximately 62% of respondents were males while 38% were females. The participants were 42% from Tier 1 cities, 30% from Tier 2 cities and 28% from Tier 3 Cities and Rural areas.

Highlights from the Survey Results

The detailed national poll results are given below: