October 6, 2021, New Delhi: India within a week is likely to achieve the big milestone of administering 100 crore or 1 billion COVID vaccine doses, and conducting the world’s most extensive COVID vaccination drive in less than 10 months. On Sep 17, it administered over 2 crore or 20 million vaccine doses in a single day. The supply of vaccine doses, which was a constraint in June-July, is no longer an issue, and in the coming months, supply of vaccine doses is expected from Zydus Cadilla, Biological-E, Novavax and Gennova in addition to the existing suppliers, Serum Institiute, Bharat Biotech and Sputnik-Dr.Reddy’s.

Though the daily caseloads have declined from 400,000 in mid-May to approximately 20,000 now, genome sequencing results still suggest that the prevailing variant in India continues to be the Delta variant. Medical experts, citing SERO surveys, believe that 60-70% of citizens in most states of India still have COVID antibodies from the 2nd wave in April-May this year as the primary reason for the reduced number of cases.

States, on the other hand, are encouraging residents to get inoculated, conducting awareness drives in both urban and rural areas, and even mandating vaccination in some places vis-a-vis addressing myths that surrounds vaccines. Vaccine hesitancy has been cited as one of the top-10 global health challenges by the World Health Organisation (WHO), and India experienced its share of vaccine hesitancy during the early part of the COVID vaccination drive, with even many healthcare workers showing resistance. However, with the advent of the brutal 2nd COVID wave and almost every person’s social network seeing either hospitalisation or death of someone, many changed their mind and stepped forward to take the vaccine starting early April. Shortages were reported across many states from April till August.

Of those who haven’t taken the COVID vaccine dose yet, 46% are willing to take it soon while another 27% may take it down the road as more vaccines/variant efficacy data emerge

India has an adult population of 94 crores and 68 crores of first doses and 26 crores of second doses have been administered so far. Taking cognisance of the fact that the majority of India’s adult population has now taken the first dose of the vaccine, the survey sought to understand from the unvaccinated citizens about their plans and their reasons for not taking the vaccine yet. The responses suggest that 46% of the unvaccinated citizens plan on soon taking their first dose of vaccine. There were, however, 27% of citizens who do not plan to take the vaccine yet as they are not convinced about whether the currently available vaccine provides enough protection from the current and future variants. They may take the vaccine if more data become available or if different vaccines become available. Breaking down the poll, 9% of citizens do not plan to take the vaccine at all. Meanwhile, 9% are hesitant to take the vaccine currently due to uncertainty regarding side effects, whereas another 9% of citizens believe they are unable to take the vaccine due to their prevailing medical condition. This question in the survey received 12,810 responses. 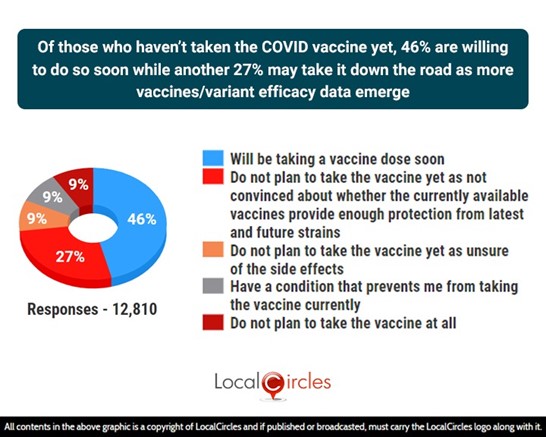 In the community feedback exercise few individuals, who haven’t taken the vaccine dose expressed their concerns about the efficacy of vaccine, is likely to reduce over time and are awaiting information whether the current vaccine will be effective with a future variant. Some members also expressed apprehensions about safety, quick clinical trials and rushed vaccine approvals. For some of the unvaccinated individuals, the side effects of the vaccine also remain a cause for concern. A few members with a medical condition cited concerns of blood clotting. Some of the unvaccinated individuals also cited COVID going away as the reason for them to not get vaccinated. In addition to these concerns, there are also certain other myths and misinformation prevailing which are making people hold back from taking the vaccine.

7 crore Indians are currently hesitant to take the COVID vaccine

If the findings from the above poll are applied to the entire population, it suggests that only 7% citizens are now hesitant to take the vaccine, a marked contrast from when the vaccination drive commenced in January this year and the LocalCircles survey indicated 60% of the population as vaccine hesitant. The advent of the brutal 2nd COVID wave was the turning point with many more dropping their hesitancy and becoming willing to take the vaccine.

India has an adult population of 94 crores and 68 crores have received their first dose of COVID vaccine, leaving 26 crore adults still not vaccinated. If the survey percentages of different categories are applied to this 26-crore population, it indicates that 11.96 crore citizens may take the vaccine as soon as they get the opportunity. Another 7.02 crore citizens are awaiting more information on vaccines, their effectiveness on variants, along with the efficacy of existing vaccines like Covishield and Covaxin, and some are also awaiting the arrival of more vaccines. Furthermore, 2.34 crore citizens are hesitant because of side effect that worries them, and another 2.34 crore citizens are currently of the mindset that they will not take the vaccine. Then there are the 2.34 crore citizens who believe that they cannot take the vaccine due to their existing medical condition. While these are an approximation based on the application of survey findings to the unvaccinated population, it does provide a broad idea of how the hesitant pie might be looking like. 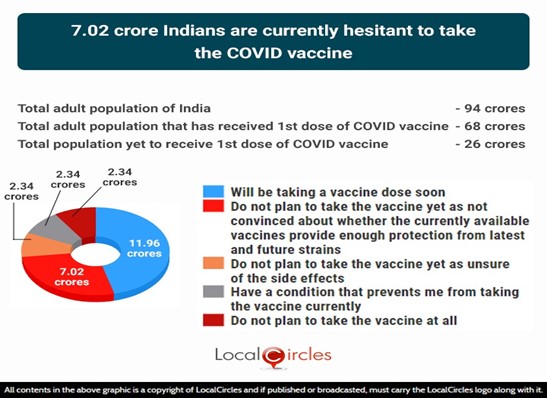 In summary, the survey of the unvaccinated citizens shows that 46% of citizens are willing to take the vaccine soon, and 24% may take it if they get convinced about the efficacy or if more vaccines become available. If the survey findings are applied to the unvaccinated population of 26 crores, it indicates that 11.96 crore citizens may take the vaccine in the near future and another 7.02 crore citizens may take it once more data and vaccines become available. However, we may be left with another 7.02 crore citizens who are currently not inclined to take the vaccine. It is this population that must be the target of all vaccine awareness, sensitisation and information drives.

LocalCircles will share the findings of this survey with key stakeholders in the Central and State Governments so actions can be taken to address vaccine hesitancy.