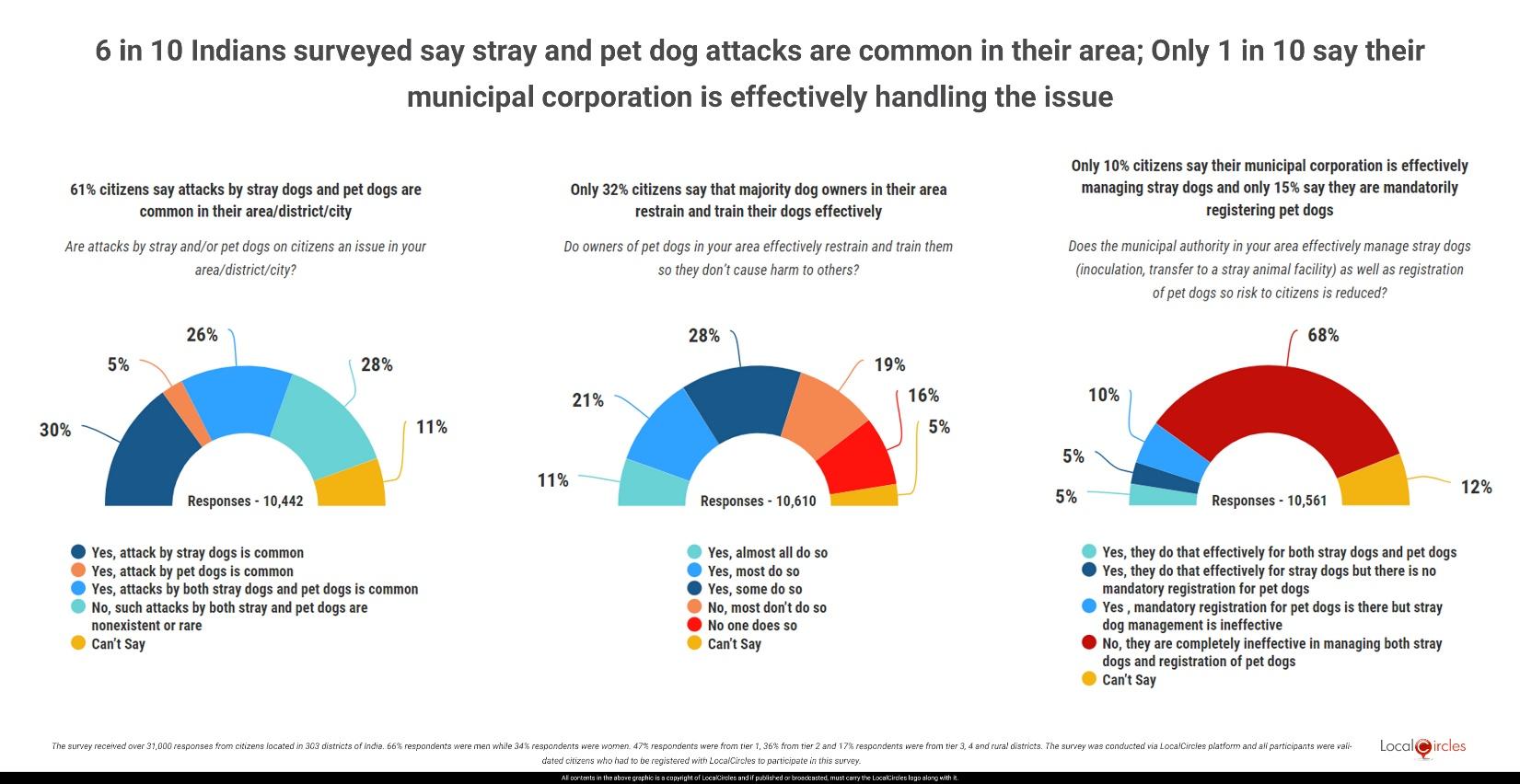 October 19, 2022, New Delhi: Over the last few weeks people may have read, heard or even seen on viral videos of a delivery boy being attacked by a pet dog in the lift of a housing colony or a Ghaziabad boy who had to get 150 stitches on his face after being attacked by his neighbour’s Pitbull dog. In another horrifying incident, an infant was mauled by a stray dog in a housing society in Noida resulting in his death on Oct 17th.

Dogs may be man’s best friend and a loyal companion but if not trained and cared for, they do tend to attack. This is true of many stray dogs in particular. Animal lovers across our country and even globally tend to feed and care (provide medical care including sterilization) for stray dogs. Many even arrange shelter and clothing for them during winter months. But at the end of the day, most of the stray dogs are left to fend for themselves resulting in their being hungry, neglected and ferocious. There may be varied reasons why a pet dog/ stray dog attacks a human being or ends up mauling and killing a child or even an adult. Dogs being one of the carriers of rabies, a killer disease, are thus greatly feared by many. Phobia about dogs at times can also be without reason.

Around 20,000 people annually die of rabies in India, accounting for 36% of global rabies deaths, according to the World Health Organisation (WHO). As per the central government’s livestock census, the stray dog population in the country has dipped from 1.7 crore in 2012 to about 1.6 crore in 2021, when around 17.01 lakh dog bites cases were reported. The four states with the highest incidents of street dog bites are Tamil Nadu, Maharashtra, West Bengal and Gujarat, according to the data tabled by the Union Ministry of Fisheries, Animal Husbandry and Dairying in parliament on July 26th this year. The highest number of stray dogs, on the other hand, are in Uttar Pradesh, followed by Odisha, Maharashtra and Rajasthan. 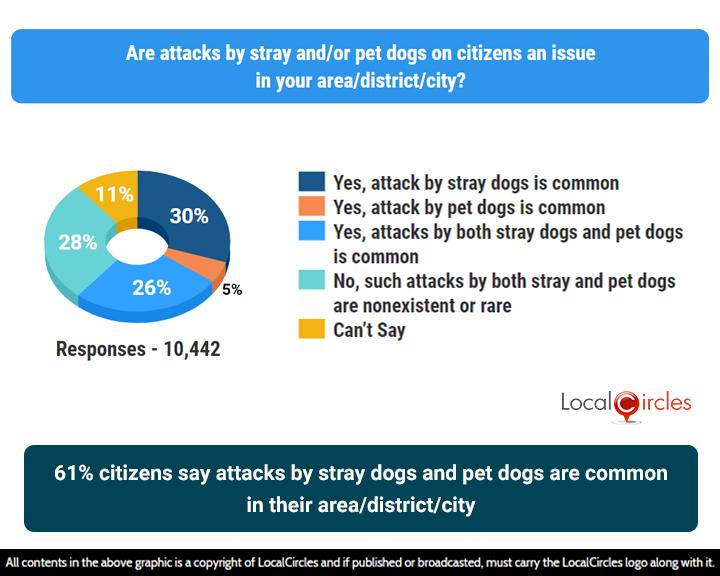 To the next survey question, “Do owners of pet dogs in your area effectively restrain and train them so that they don’t cause harm to others” only 32% of the respondents admitted that most of them care to do so. Of the 10,610 respondents to the query 11% stated “almost all do so”; 21 stated “most do so”; and 28% indicated “some do so”. The survey revealed that 19% are unhappy that “most (pet owners) don’t do so” and 16% felt the pet owners don’t take the trouble of training their pets. Only 5% refrained from commenting. According to feedback received, most people who keep pets do not spend the time and resources to train them and effectively restrain them when they are in public places. Complaints like big pet dogs with long leashes being walked by someone who cannot effectively control them are common and lead to risk for others in public spaces. 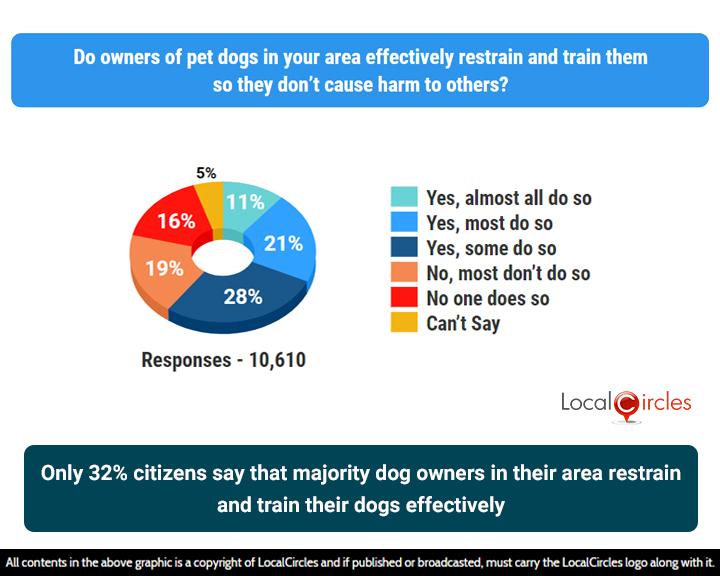 To find out whether the local bodies were doing what needs to be done to safeguard the citizens from attacks by stray dogs and ensuring that pet dogs are registered, the next question in the survey asked, “Does the municipal authority in your area effectively manage stray dogs (inoculation, transfer to a stray animal facility) as well as registration of pet dogs so risk to citizens is reduced?”. In response, 65% respondents were vehement that “they are completely ineffective in managing both stray dogs and registration of pet dogs”. Out of 10,561 respondents, only 5% felt the civic bodies “do that effectively for both stray dogs and pet dogs”; while another 5% felt “they do that effectively for stray dogs but there is no mandatory registration for pet dogs:; and another 10% indicated that while mandatory registration for pet dogs is there “but stray dog management is ineffective”. In all the survey presents a clear picture that only 1 in 10 believe stray dog management by their local body is effective and 1 in 20 believe that the mandatory pet registration is being effectively handled by their local body leaving a lot to be done on both fronts. 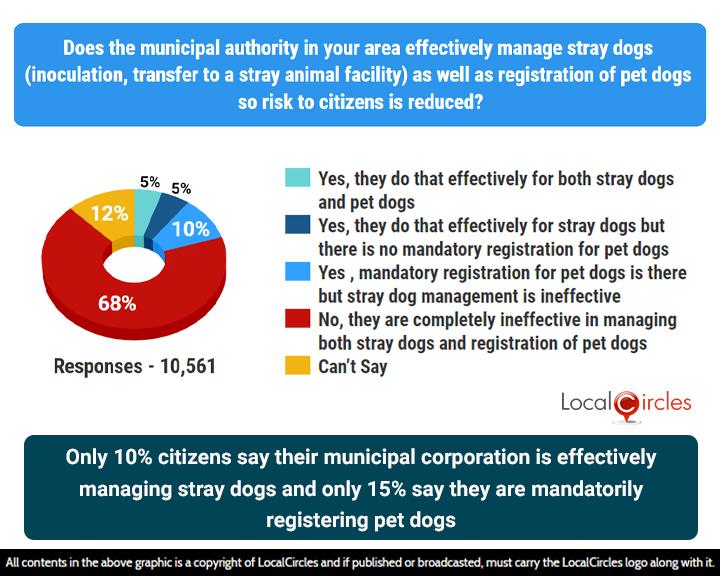 In summary, a lot more needs to be done to protect the rights of ordinary citizens, whether they have pets or not, to ensure that they or their family members are not subjected to the risk of dog bites from stray or pet dogs. If the dogs are vaccinated against rabies and well monitored, the risk to the lives of people is reduced. A dog bite whether by a pet dog or a stray dog can be painful and equally dangerous as recent incidents have illustrated. The civic bodies need to take steps to ensure safety of common citizens as 90% are currently dissatisfied with their local body’s stray dog management and 95% feel pet dog registration is ineffective.

According to the citizen feedback received, most of the municipalities in India just don’t care about stray animal management at this time and hence handling them is not a priority for them. LocalCircles is of the view that the Government’s Swachh Bharat Mission which also rates cities each year for cleanliness should make stray animal management a key parameter when rating cities for cleanliness. This will drive focus on stray animal and stray dog management as well as drive funding allocation towards this cause. A city can be rated most clean but if the senior citizens need to go for their morning walk with a stick to handle stray dogs and children are scared to step out, it is best to classify as dangerous and our tax paying citizens do deserve better.