Startup/SME Survey: How Startups and SMEs are getting impacted by Demonetization 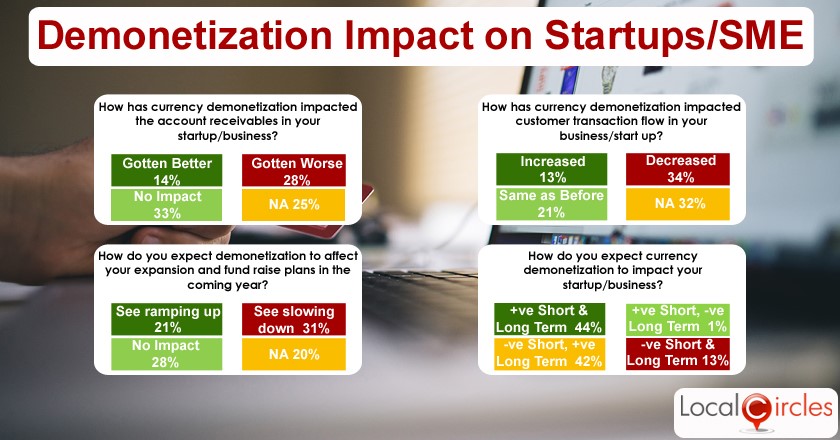 November 22, 2016, New Delhi, India: A higher percent of Startups and SME businesses are experiencing a slow down in receivables and transaction flow as compared to those seeing improvements. Also, a higher percent of startups and SMEs now expect a slowdown in funding and expansion plans than those who expect an uptick. These were some of the findings of the LocalCircles, Start Up India Community. The Start Up India online community on LocalCircles brings together over 30,000 startups and entrepreneurs from across India and a 4 point survey was conducted amongst them. Over 4000 start ups or SME entrepreneurs voted in the survey.

Though some of the members reported that their customers were paying the bills in the old currency notes, overall, more startups and businesses are experiencing their receivables slowing. 28% suggested they had gotten worse, 33% experienced no impact, 14% saw receivables getting better i.e. payments improving and 25% did not have account receivables.

The third question in the poll focused on fund raise and business expansion and the impact of Demonetization. 31% of the startups or SMEs see a slow down in fund raising and their expansion. 28% do not see any impact while 21% see them ramping up. 20% said this was not applicable to them as they do not have plans for fund raise or expansion. The ramp up may be observed in the financial technology and related startups as millions of Indians will soon be looking for alternate ways of transacting other than cash.

Below are the detailed poll graphics.