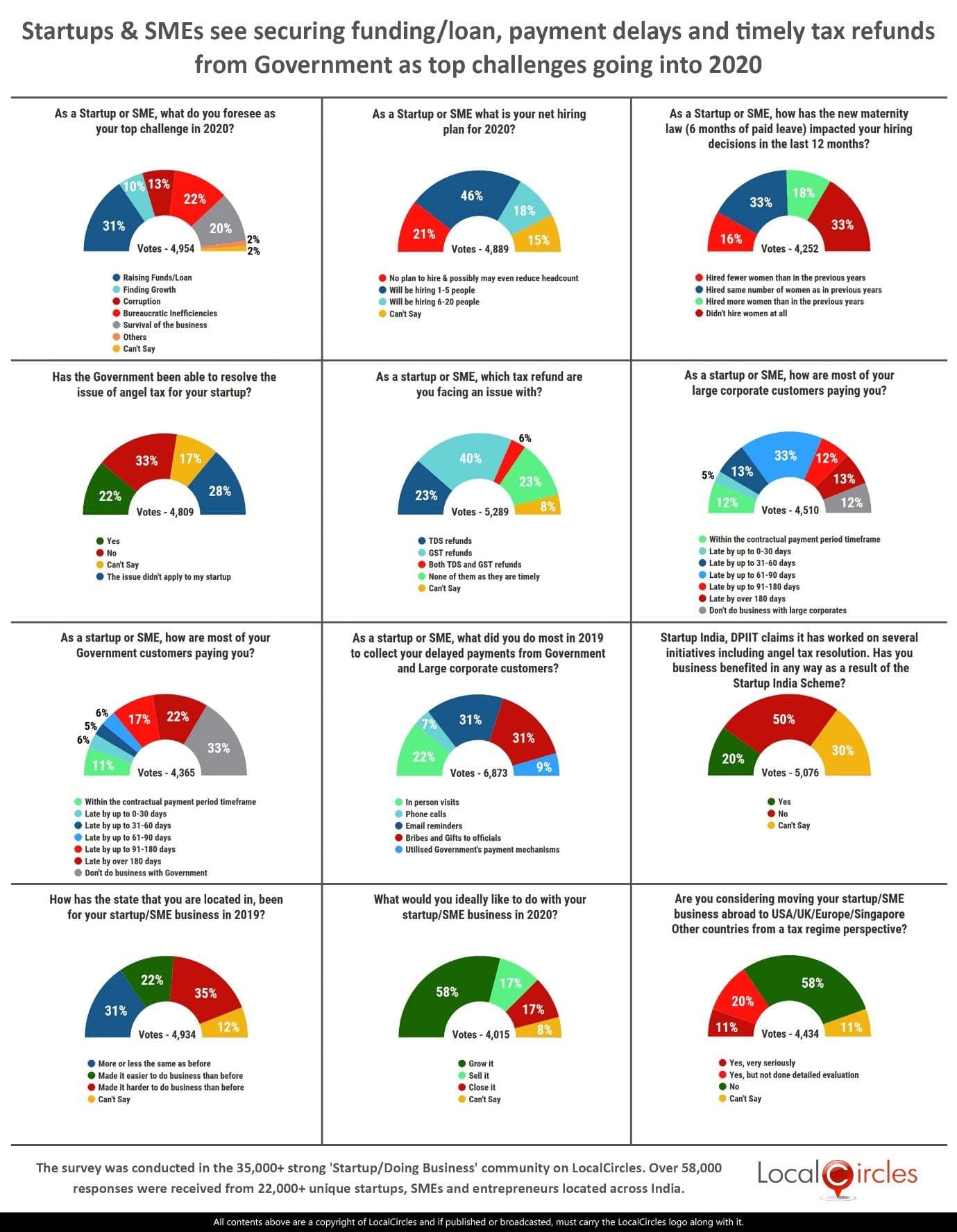 December 22, 2019, New Delhi: Like the last year, 2019 has sort of been a forgettable year for the SME and startup sector of India. Although companies like Delhivery, BigBasket, Rivigo, Icertis, Dream11 etc. were able to achieve the Unicorn tag this year, some startups like Shopclues lost their unicorn status, several like Tapzo, Wooplr, etc. shut shops or their tech platforms. While companies like PayTM and OYO continued to be able to raise large amounts of capital but the seed stage funding for startups declined significantly from 2018 to 2019. For the SME sector, cash flow, working capital and securing loans continued to be a major challenge and when combined with slowdown in demand, delivered a double whammy to the sector. The impact of a struggling startup and SME sector is being felt on the Indian economy. The GDP growth in the quarter ending Sep 19 dipped to 4.5%.

LocalCircles conducted a survey amongst 35,000+ startups, SMEs and entrepreneurs from different parts of India to find out how business was going for them and the different roadblocks they faced in 2019 in making their startups or sme business successful. The set of 12 polls garnered more than 58,000 responses from across the country and highlighted the issues startups/SMEs face while operating in India and their outlook.

The first question asked as a startup or SME, what do they foresee as their top challenge in 2020. Amongst others, 31% said raising funds/loans, 10% said finding growth, 13% said corruption, 22% said bureaucratic inefficiencies and 20% said survival of the business would be their key challenges. 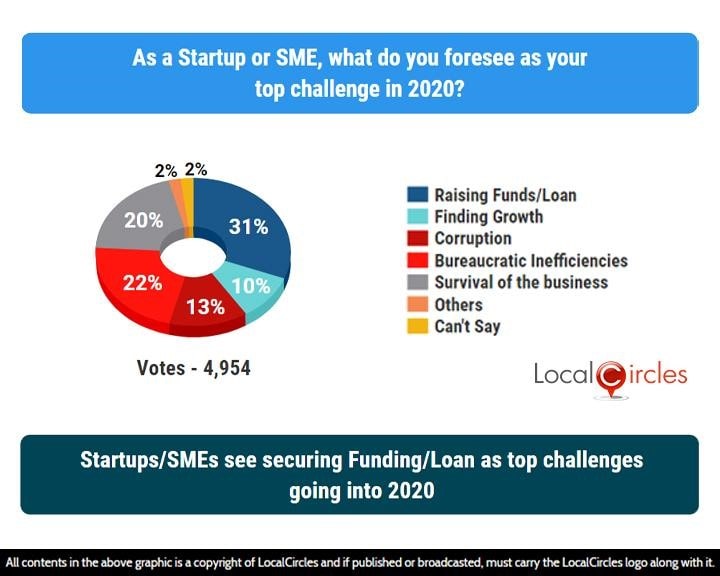 Like last year, raising fresh funds along with bureaucratic inefficiencies continued to be the major pain points for startups this year as well, especially those at seed stage. Most worrying fact is that unlike last year, a large number of startups and SMEs are worried about their survival. 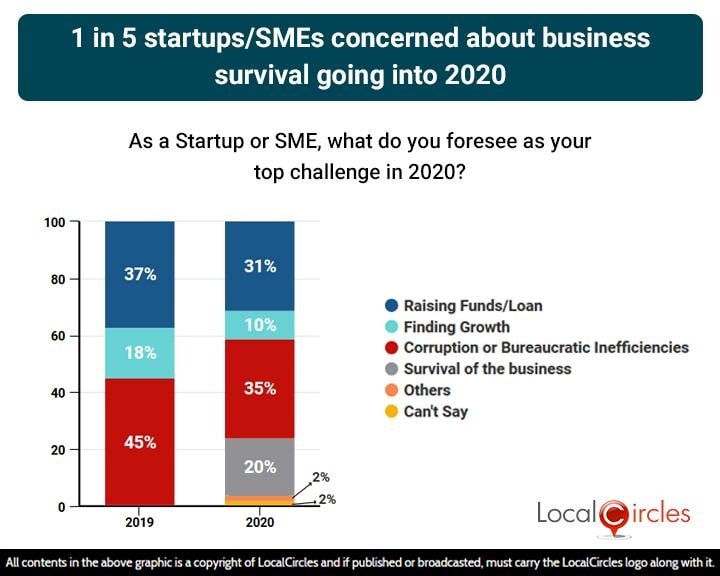 Number of early stage startup funding deals fell to a 5 year low in first half of 2019. On the other hand, banks hesitate in lending to SMEs if there is even a marginal cash flow issue. Also, large NPAs have led to banks not accommodating the SME new loan requests, or charging very high rate of interest making it tough for the SMEs to secure loans.

The talks of an upcoming global recession and the projection of sub-5% GDP growth in FY20 in India have been major pull downs for the startup and SME sector, with many of them acting cautiously about increasing their team sizes. Even many large startups like Oyo, PayTM, Ola have all done layoffs already or announced them recently. 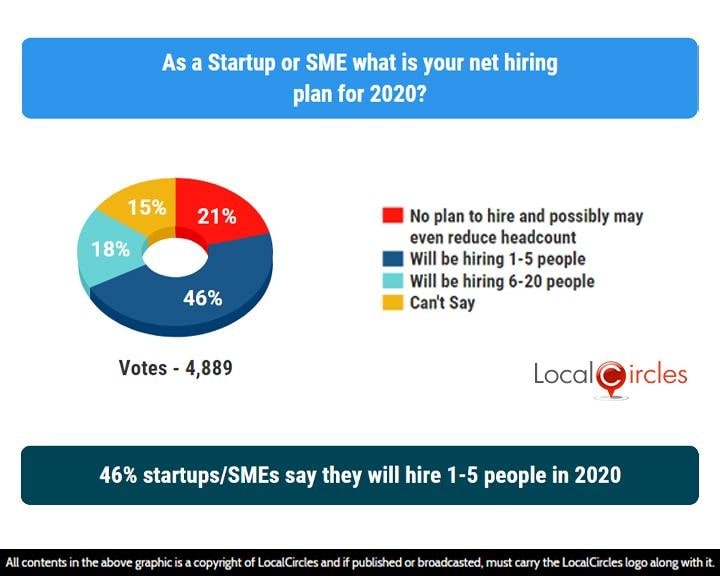 More startups/SMEs this year, when compared to last year, are uncertain about their hiring plans going into 2020.

More Startups/SMEs uncertain about their hiring plans going into 2020 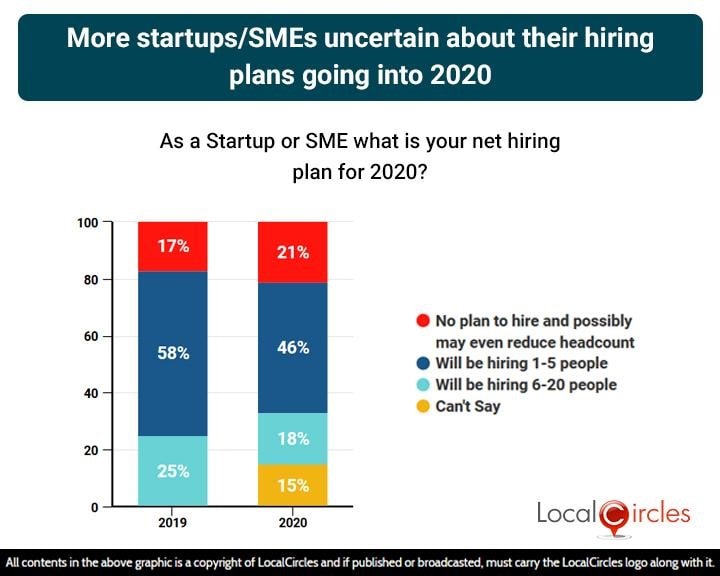 Hiring of women continues to dip according to startups and SMEs. Many smaller startups and SMEs have said that giving a 6-month paid leave and hiring a short-term replacement will put a lot of strain on their already fragile resources, hinting towards the fact that they may not be processing resumes of women candidates in a certain age group due to their inability to afford the maternity benefit which requires an employer to provide 6 months of pay to an employee out on maternity. 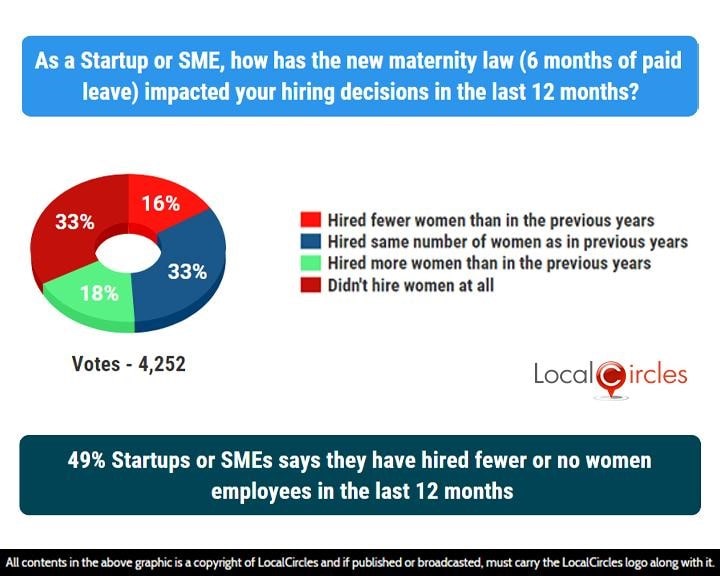 In 2012-13, Angel Tax was introduced by the then Finance Minister Pranab Mukherjee to put a check on cases of black money which was finding its way into shell companies as equity capital. In the next few years, angel tax became a thorn in the flesh of many startups, giving founders sleepless nights. Earlier this year, after significant efforts from platforms like LocalCircles and others, the Government announced angel tax exemption for startups. So far this year, more than 1600 startups have been notified by the Government about the angel tax exemption. While this is useful for new startups instantly who will get exemption from notices, those startups with pending demand orders are still going through the process of hearing with CIT who if satisfied may accept their appeal based on the exemption and grant relief. In addition to this, startups with existing notices for FY 16-17 still had to submit their information to the Income Tax Officer requesting exemption.

In a LocalCircles survey in Feb 2019, 73% of startups who had raised angel capital had gotten a scrutiny notice under Section 56 (2)viib, which led to Ministry of Finance taking note of the problem and then bringing out angel tax exemption based on self- certified investment declaration for DPIIT registered startups.

The findings indicate that while there is clearly an improvement on this issue from early 2019, closure on the pending angel tax cases along with ensuring no new notices are generated for exempted startups is key for the startup ecosystem to give an all clear on the issue. Section 68, which pertains to authenticity of investor or sources of funds is also referred to us angel tax by many in the startup ecosystem. This is a section where no relief has been put in place by CBDT. 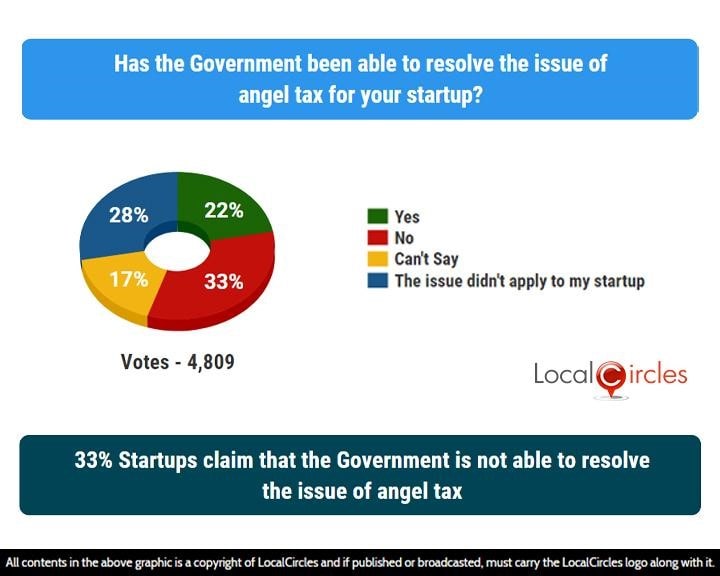 Many startups and SMEs associations had recently brought up how their pending TDS and GST refunds are posing huge problems for them as they put a strain on their already tight financial situation. This issue was taken up by LocalCircles with the Finance Minister in June 2019 and via July 2019 budget and Aug 23rd, 2019 announcement, Startups and SMEs were expecting to see movement in TDS and GST refunds. 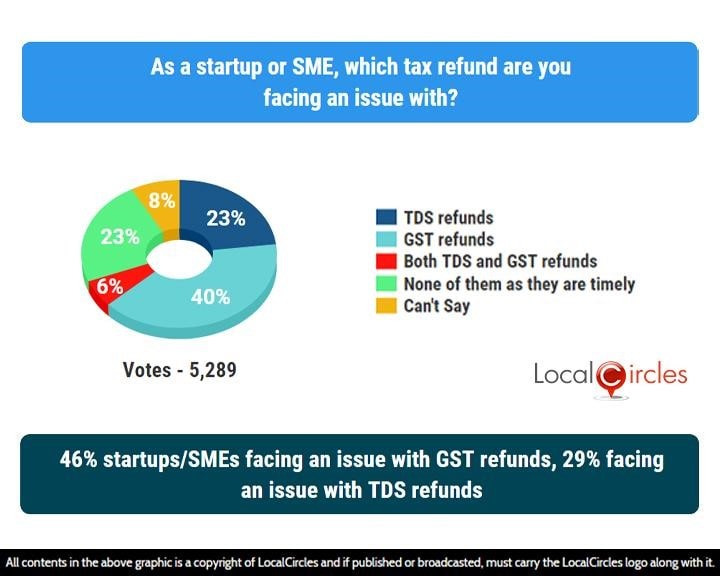 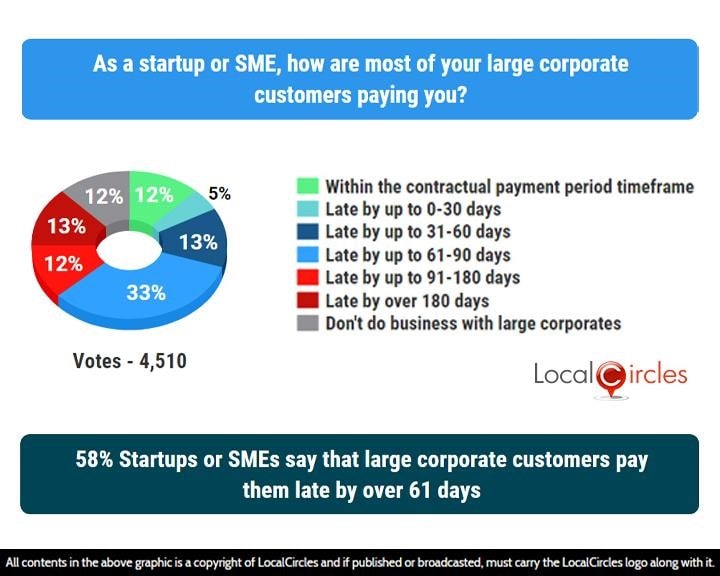 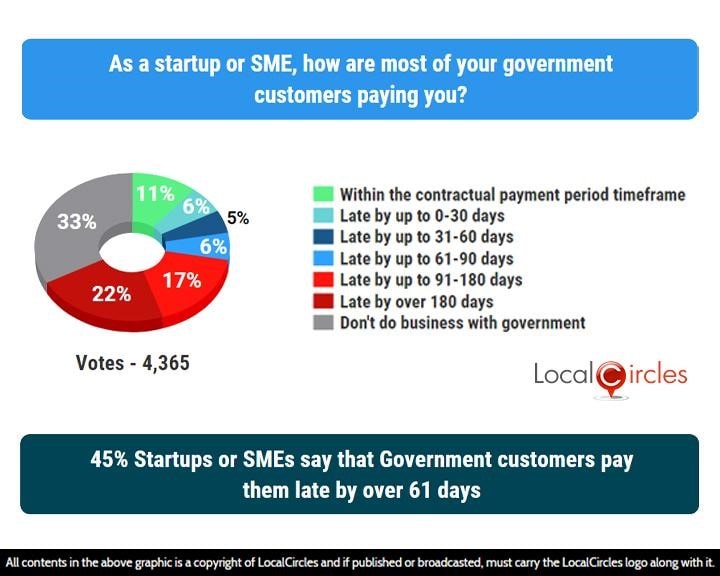 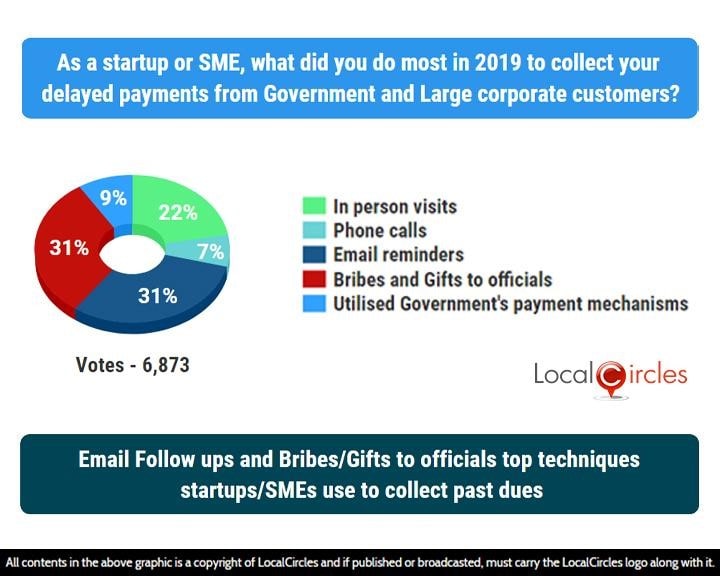 Startup India, DPIIT has claimed that it has worked on several initiatives including angel tax resolution. The following question asked if their business had benefited in any way as a result of the Startup India scheme. 50% said ‘no’ while only 20% said ‘yes’. 30% were unsure. 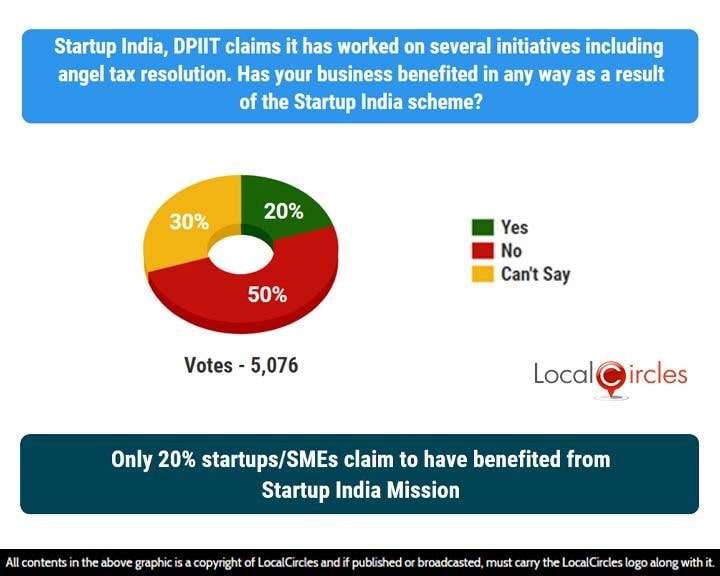 If we look at the comparison from last year, there has been a small increase in number of startups and SMEs who believe that Startup India mission has been of help to them. 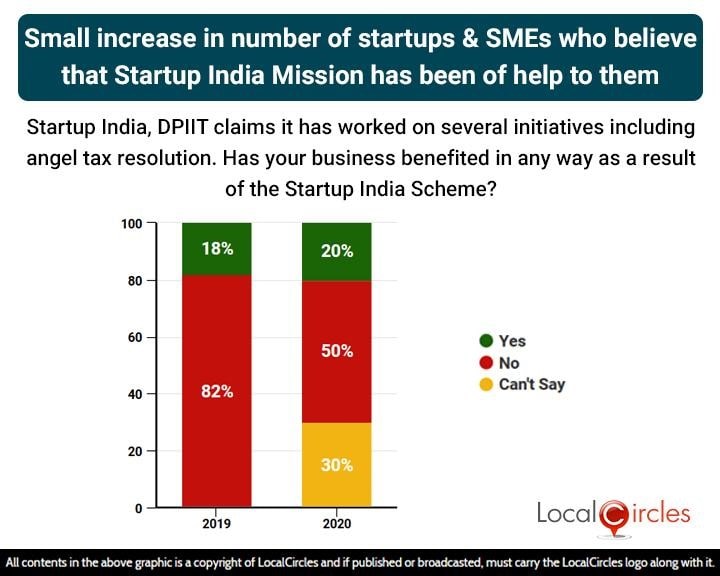 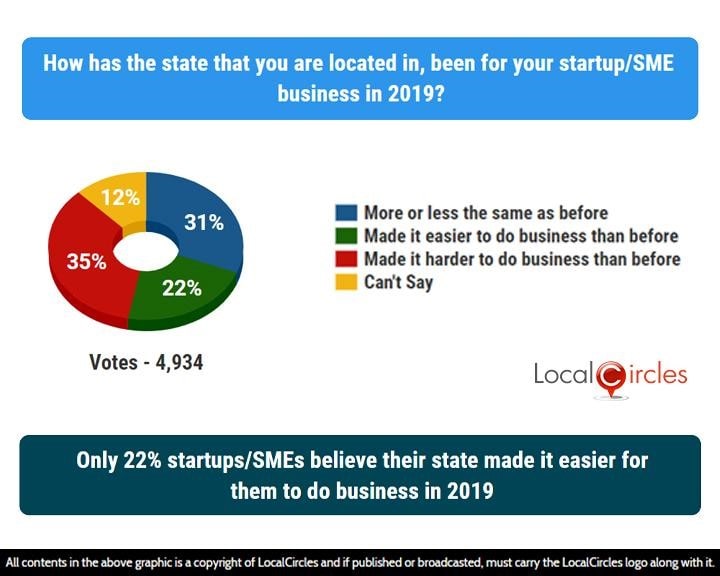 In comparison to 2018, more startups and SMEs in 2019 felt that their state made it easier for them to do business. The state Governments are becoming more and more flexible and have been welcoming startups to set up infrastructure in their state and assisting them in all possible manner.

In comparison to 2018, more startups and SMEs in 2019 felt that their state made it easier for them to do business 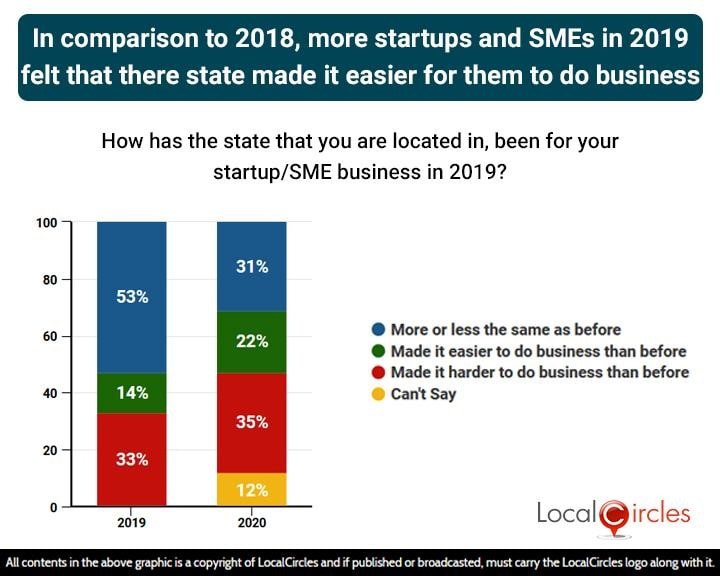 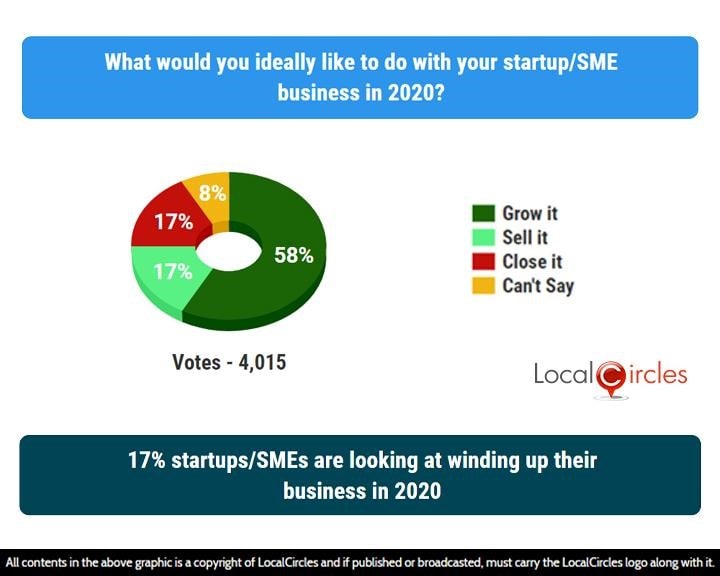 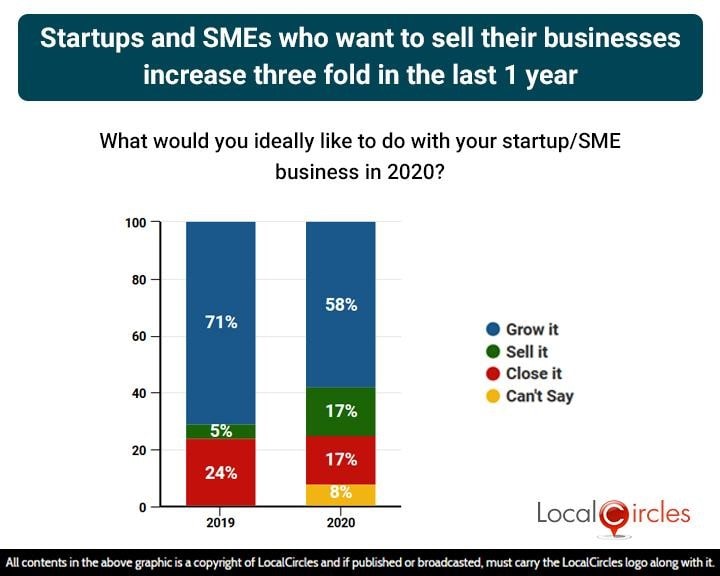 For many years now, startups have talking about how the Indian taxation system puts a big burden on them, when compared to the taxation systems of some other countries. This is the reason why many startups like Flipkart and BookMyShow decided to move their HQs to Singapore, which is considered a more startup-friendly country.

In the final poll, 11% startups/SMEs said they are very seriously considering moving their startup/SME business abroad to USA/UK/Singapore/other countries from a tax regime purpose. 20% said they have done preliminary evaluation but have not done detailed evaluation. 58% said they are okay with the current tax policies in India.

11% startups/SMEs say they are seriously evaluating moving out of India; another 20% going through preliminary evaluation 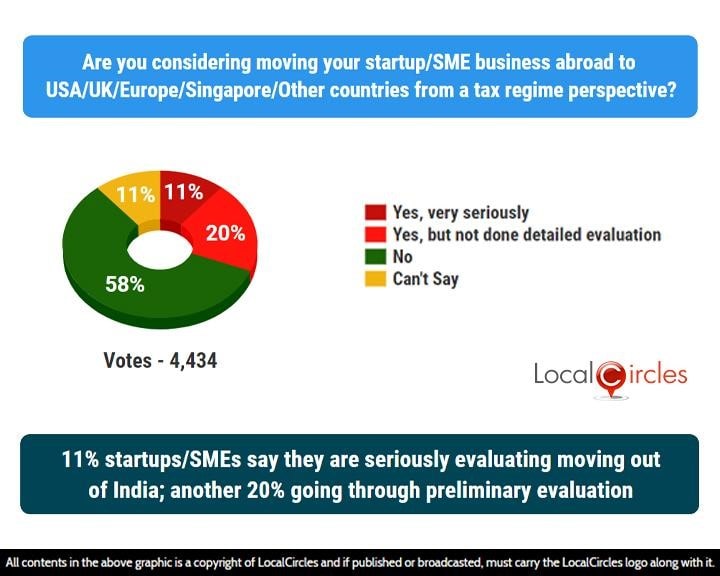 The Government has done well in certain areas to build a conducive environment for startups and SMEs to grow but there are still many areas where much more work is needed. These areas include ensuring faster flows of tax refunds to startups and SMEs, enabling them to do business with Government departments by enforcing the policy that requires 20% mandatory Government procurement from startups/SMEs. India’s Ease of Doing Business ranking has constantly improved over the years and this might be an indication that India is becoming a far more attractive destination to startup, than it was a few years ago. In addition to above is the need for a more robust funding and financing ecosystem which can provide equity, debt and loans to startups and SMEs easily. An impact fund directly or indirectly supported by the Government will also help social startups and SMEs get to the next level.

All said and done, Indian startups and SMEs hope that they would get the needed support from Government in the coming year and would be able to leave behind the worries and problems of 2019.

Sachin Taparia, Chairman - LocalCircles, on Dec 17th, 2019, presented the issues of the startup and SMEs to the Finance Minister Mrs. Nirmala Sitharaman and her leadership team along with Secretary DPIIT, Secretary Commerce. The key issues shared included mechanism to ensure timely payments by Government and large corporates to startups & SMEs, faster TDS & GST refunds, enforcement of the rule that requires Government departments and PSUs to conduct 20% of their total procurement through SMEs and startups. Issues that were also discussed included ensuring foreign technology platforms with any direct presence in India to invoice its customers in India from their Indian entity and help startups from the additional burden of equalisation levy. In addition, Mr. Taparia also highlighted the need to ensure ESOPs become taxable at actual sale and not at the point of exercise. The issue of exempting early stage startups from GST under Reverse Charge Mechanism was also discussed as it makes the cost of doing business from India 18% higher. Mr. Taparia explained how such seed startups don’t have enough revenue and hence are unable to avail the Input Tax Credit offset.

LocalCircles is hopeful that the Government will announce more measures via Budget 2020, Startup India and Ministry of MSME to help the startup and SME ecosystem in the new year.

LocalCircles. Over 58,000 responses were received from 22,000+ unique startups, SMEs and entrepreneurs located across India. 42% of the businesses were from Tier 1 cities, 38% form Tier 2 Cities and 20% from Tier 3 and beyond locations.