64% Indians surveyed get 3 or more spam calls every day 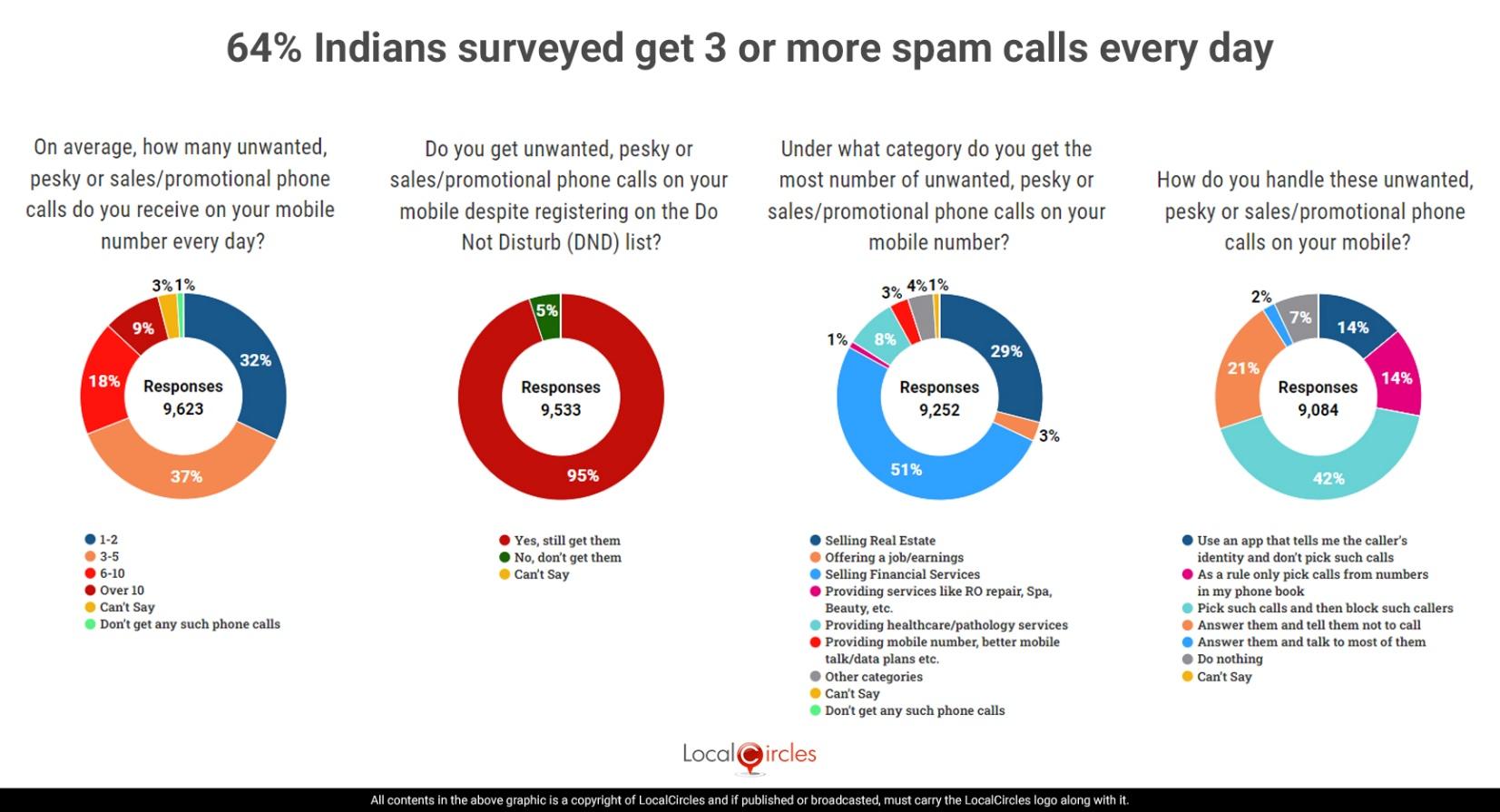 May 17, 2022, New Delhi: The number of unwanted, pesky, sales or promotional phone calls that Indians get every day is on the rise although such calls fall under the Government’s radar. A month after the LocalCircles report on spam SMS was released in June 2021, the Department of Telecommunication in July 2021 proposed measures to act against unsolicited SMS sent to the phone numbers of citizens. However, the menace of Unwanted Commercial Communication (UCC) continues unabated and for the last 9 months, LocalCircles has received a large number of complaints about spam phone calls.

India is one of the most spammed countries in the world as citizens receive nearly 17 spam calls per user per month on average, as claimed by a caller ID app, Truecaller. To quantify what citizens are currently experiencing in regards to unsolicited phone calls, LocalCircles has conducted a national survey. In addition, the survey has tried to get a perspective if there has been any reduction in the number of such calls Indians get on their mobile phones every day on average. Moreover, it then tried to understand if they are getting such calls despite registering on TRAI’s Do Not Disturb (DND). It then tried to find out the type of spam calls Indians receive. The survey received over 37,000 responses from citizens residing across 377 districts of India. 69% respondents were men while 31% respondents were women. 44% respondents were from tier 1, 33% from tier 2 and 23% respondents were from tier 3, 4 and rural districts.

The first question in the survey asked Indians about the number of unwanted, pesky or sales/promotional phone calls they get every day on average. In response, 37% said they get “3-5” promotional calls every day. 32% get “1-2” calls, 18% said “6-10”, and 9% said “over 10” calls every day on an average. Only 1% said they “Don’t get any such phone calls”. 3% of citizens did not have an opinion. On an aggregate basis, 64% of Indian get 3 or more spam phone calls on average on their mobile each day. This question received 9,623 responses. 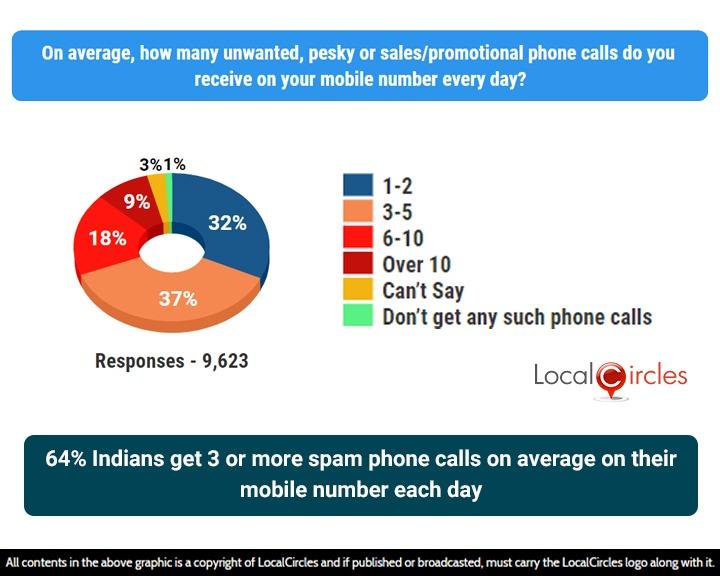 Many people face issues of unwanted calls made to them by fraudsters, spammers, and telemarketers, despite registering on TRAI’s Do Not Call Registry (DND). The next question sought to know if citizens that have subscribed to Do Not Disturb (DND) list are getting unwanted, pesky or sales/promotional phone calls on their mobile phones. In response, the majority of 95% of Indians said “Yes, still get them” and only 5% said “No, don’t get them”. 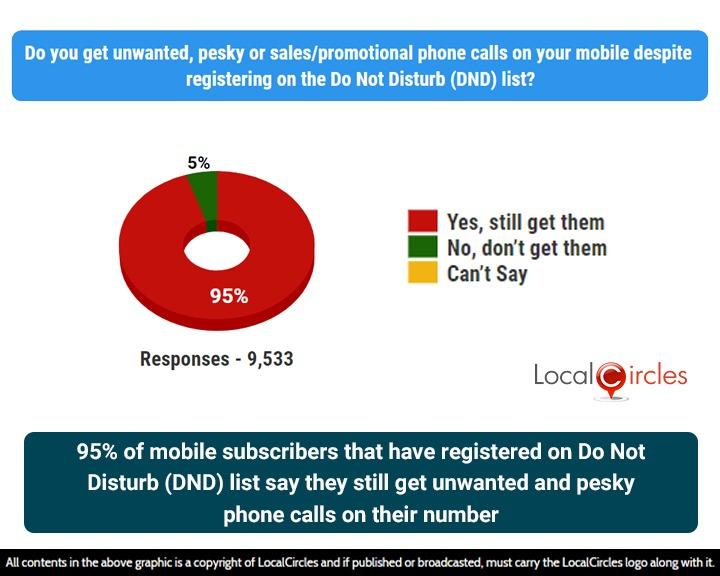 Spam SMS sent from banks, insurance brokers, car dealers, spa services, property agents and lately income opportunities have continued to annoy citizens. Breaking down further, the survey looked into categories under which citizens are getting the most number of unwanted, pesky or sales/promotional phone calls do on their mobile number. In response, 8% of India say they get calls regarding “Providing healthcare/pathology services”, 3% get “Offering a job/earning” calls, 1% said “Providing services like RO repair, spa, beauty, etc.”, and 3% said “Providing mobile number, better mobile talk/data plans etc.” The majority of 51% of Indians said they get “Selling financial services” calls and 29% get “Selling real estate” calls. This question received 9,252 responses. 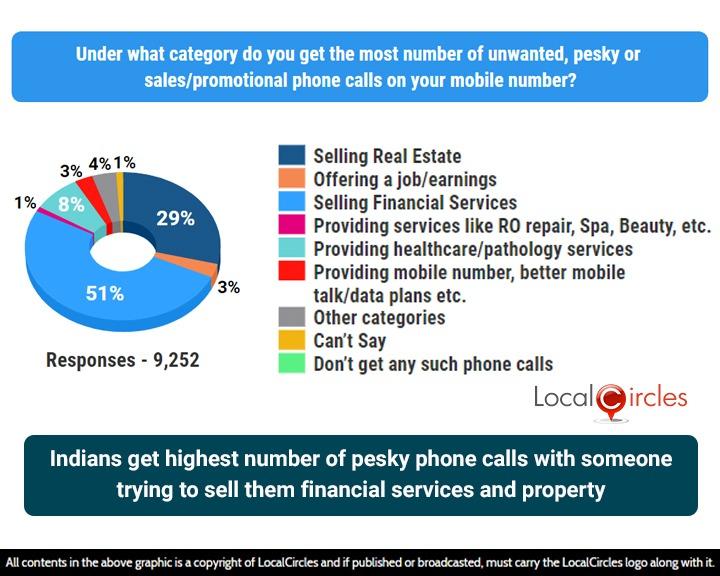 The final question in the survey sought to understand Indians handle these unwanted, pesky or sales/promotional phone calls on their mobile. In response, 14% said they use an app that tells them the caller’s identity and don’t pick such calls and another 14% said “As a rule only pick up calls from numbers in my phone book.” Only 2% citizens said that they answer calls and talk to most of them while 7% said they do nothing. There were also 42% of citizens who said they pick up such calls and then block them and 21% answer them and tell them not to call. On an aggregate basis, the top-2 ways Indians handle pesky or spam calls in by picking the call and then either blocking the caller or telling them not to call again. This question received 9,084 responses. 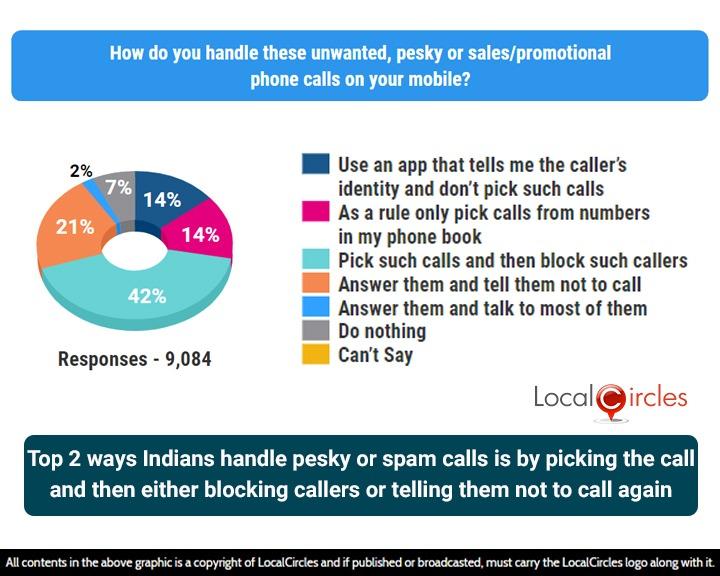 In summary, 64% of Indians get 3 or more spam phone calls on average on their mobile number each day. More worrying is that, 95% of mobile subscribers that have registered on Do Not Disturb (DND) list say they still get unwanted and pesky phone calls on their number. The findings also indicate that the majority of Indians get the highest number of pesky phone calls from someone trying to sell them financial services and property. Top 2 ways Indians handle pesky or spam calls is by picking the call and then either blocking the caller or telling them not to call again.

The decision to levy fines may discourage spammers to send unsolicited SMS and calls to consumers, but its success will depend upon the implementation mechanism, and ease for consumers to report such unwanted SMS and pesky calls. As indicated by the LocalCircles’ survey published on June 12th, 2021, taking responses from over 9,000 citizens located in 289 districts of India, 89% of citizens said that the preferred way to report against UCC would be to “forward the message to a centralised number”. This means that users want a very simple mechanism to be able to forward spam text messages to a centralised number. The telecom service provider set up and the DOT system should be smarter and instead figure out the details of the sender based on the text message. The DOT should request details of all such senders from the telecom service provider and basis that issue penalty notices. Expecting that a user will take the time to find the company name of the senders and then send a complaint in a prescribed format will just not work and have a very limited impact.

LocalCircles will be sharing the findings of this pan India survey with TRAI and the Department of Telecommunications (DOT) so that necessary actions can be taken and a smarter citizen-centric system be set up to it becomes easy for citizens to submit complaints on pesky phone calls.