7 out of 10 Indians surveyed never wear a seat belt when travelling on the rear seat of a vehicle: LocalCircles Survey

September 6, 2022, New Delhi: In January, the West Delhi Traffic Police ran a 10-day campaign to ensure people sitting in the rear seat also wear seat belts as most motorists are unaware that it is not only mandatory to wear it as per the motor vehicles rules but also advisable.

One of the key reasons for non-compliance with the provisions of the Motor Vehicles Act of 1988 and Central Motor Vehicles Rules 1989 in regards to wearing seat belts in the rear row is lack of awareness combined with sub-standard enforcement of safety rules.

Unfortunately, deaths of high profile people like Gopinath Munde, former Union Minister for Rural Development, in 2014, has failed to generate enough awareness among the public. This was evident in the case of Cyrus Mistry, former chairman of Tata Sons, who is reported to have died in the car accident on September 4, due to impact of injuries as he was not wearing a seat belt unlike the driver and the co-passenger in the front seats, both of whom have survived with injuries.

Seat belts are one of the basics of car safety. It is a legal requirement for the driver and all passengers to wear a seat belt in many countries. Air bags are designed to protect a buckled passenger, not an unbuckled one. Seat belts secure you in the proper position to benefit from an airbag deployment.

According to the US National Highway Traffic Safety Administration, “Airbags are never designed to replace seat belts, which are additional restrictions. They could only save you from hitting, but it might not be helpful if you are not restrained.”

The World Health Organization (WHO) in a report released earlier this year has also emphasized that wearing safety belts in the rear seat can reduce the risk of being killed or injured by 25% and 75%, respectively. Unfortunately most people while buying a car ensure that personal safety equipment are in place and yet while using the vehicle seldom ensure that they and the co-passengers are using it properly.

Automobile experts state that in the event of a crash, an unbuckled rear passenger is more likely to collide with the front seat’s backrest. Whiplash is a type of injury that affects the vertebrae and, in many cases, cuts off oxygen to the brain.

​In many circumstances, unbelted rear passengers can crash with the front seat, driving the front passenger into the dashboard or triggering the airbag, posing a catastrophic risk. Depending on the severity of the accident, the rear passengers may fly out of the windscreen or collide with the dashboard or steering wheel. With unbelted rear-seat passengers, the risk of mortality for belted front-seat travelers increased approximately five-fold. So for the safety of all car occupants, the use of rear seat belts should be advocated. 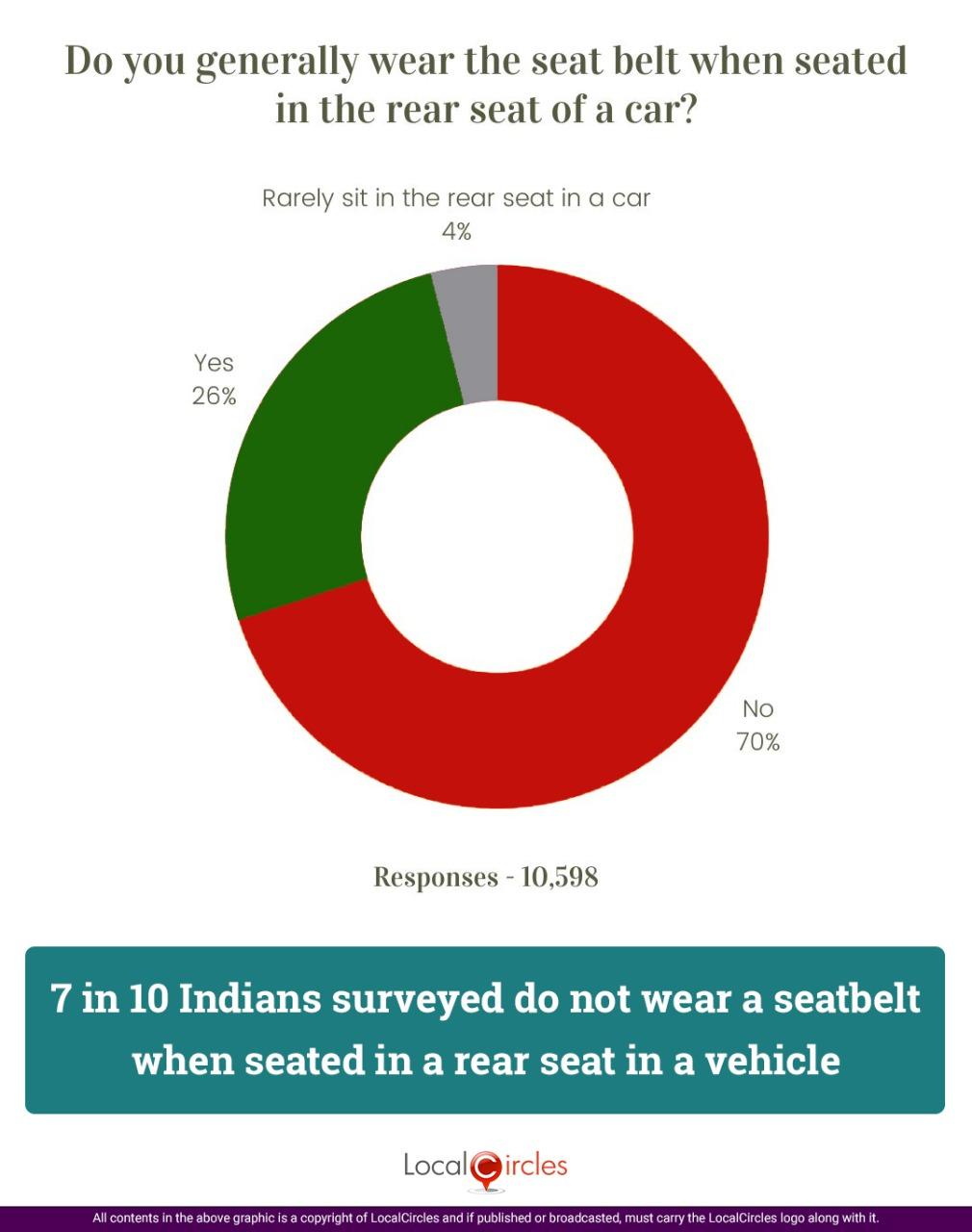 In summary, with 70% citizens in the survey admitting that they never wear a seat belt, it is clear that most Indians think of rear seat belts as useless frills in a car. The need of the hour is for Central Government and State Governments to create awareness both amongst traffic police and citizens and subsequently conduct enforcement drives such that an increasing number of people start complying.