June 6, 2020, New Delhi: The COVID-19 curve in India is touching higher peaks every day and there are no signs of its flattening. All Private and Government schools in India have been shut since 25th March and some State Governments are now considering reopening of schools from July. As per MHA’s ‘Unlock 1.0’ guidelines, schools which have been shut for over two months now will be opened after consultations with the State Governments in the second phase of unlocking.

After several discussions between parents on LocalCircles, it conducted a survey to get the collective opinion of parents on the issue of reopening of schools, and what would be the right time to do so. The survey received over 18,000 responses from 224 districts of the country. 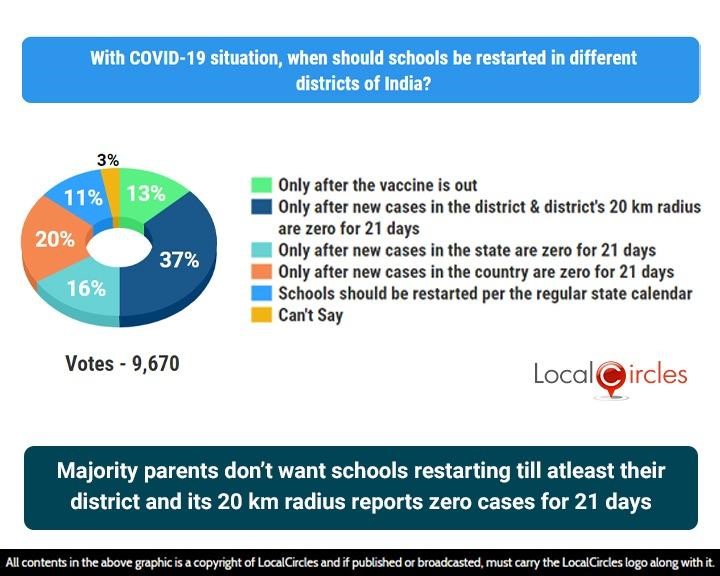 Since many students don’t have access to mobile phones and internet at home, teachers have been asked to use SMS and phone calls to instruct the students. Parents also pointed that many schools have been using WhatsApp, Facebook, Zoom, Google Meet, Microsoft Teams, etc. effectively for conducting classes over the last 90 days, and that the Government must not rush to reopen schools as safety must be paramount. According to many parents, efforts should be made by Central, State and District administrations to find ways to enable learning for children in rural India via internet, television and radio channels. Also, per some parents, corporate social responsibility funds can be locally channelized to support Government, community and municipal schools and enabling online classes there.

Children, especially the younger ones, have a tendency of getting in close proximity of each other and implementing any social distancing protocols will be a big challenge for teachers and school administration. When parents were asked if they feel that their child’s school can operate with social distancing norms in place, 38% said ‘not at all’ while another 38% said it would be ‘very difficult’. 10% said it should be somewhat difficult. Only 2% said they feel it can be done very easily while 10% said schools ‘should be able to’ operate with social distancing. 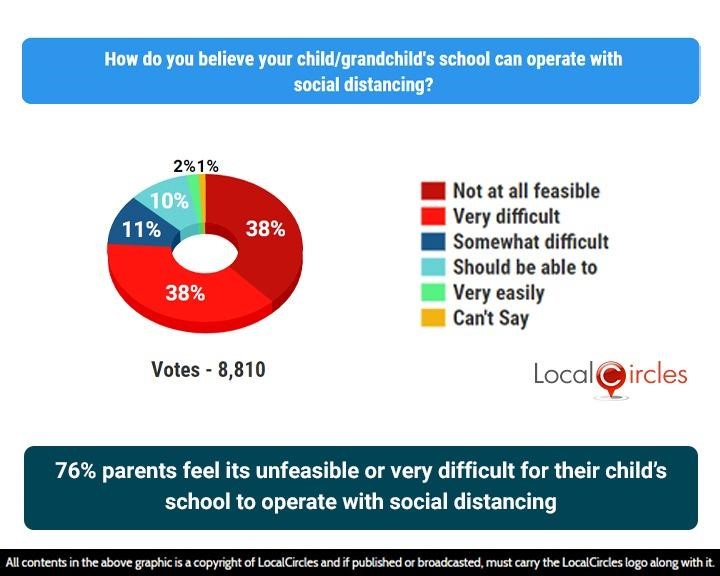 This means that 76% parents feel it is unfeasible or very difficult for their child’s school to operate with social distancing and only about 12% feel it could be done. But if it ‘should be done’ is still a big question mark.

Per reports, France has reported around 70 new COVID-19 cases in schools after a week of reopening. Other countries like Denmark and Croatia have also recently ordered the opening of schools and are already facing many challenges. In Israel, around 220 students and teachers were found to be COVID positive in the last few days and around 10,000 students and teachers have gone into home quarantine within 2 weeks of reopening of schools. Israeli health officials have also said that any school with even a single Coronavirus case would be shut immediately.

Parents through LocalCircles have suggested that looking at the pattern from various other countries, the reopening of schools in India will need to be extremely carefully planned to minimise risk to the children, as well as to ensure that children do not end up spreading COVID-19 to senior citizens or members of the family with co-morbidities. The Government efforts according to parents must be directed towards enabling online education infrastructure in schools that currently are not set up to deliver online classes as well as enabling the parents and children community. In cases where online education is not feasible, education must be delivered through television and radio with separate channels for each class. According to some parents, any such mechanism that is implemented now will only help India in the medium to long term to improve the access and quality of school education to its children.

LocalCircles will be submitting a copy of the survey to the HRD Minister, Secretary, School Education as well as to the chief ministers of various states so that the collective opinion of the parents can be used as an input in finalising the approach and the implementation protocols for school reopening.