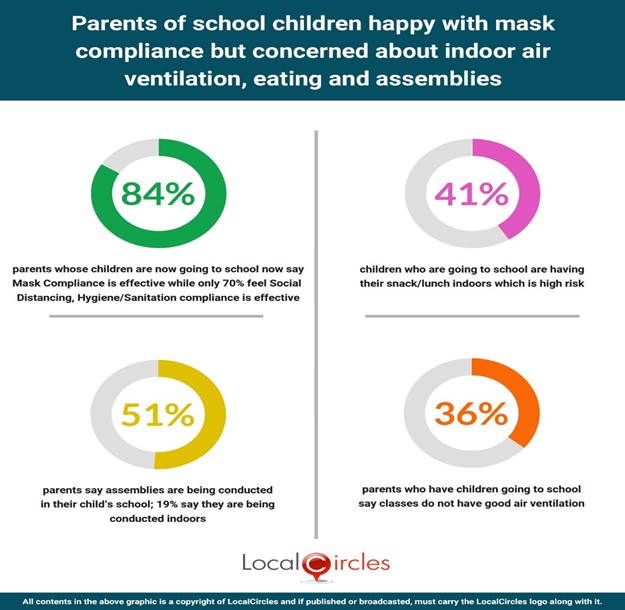 September 14, 2021, New Delhi: Amidst the decline in COVID-19 cases and the announcement of the vaccine becoming available for children between 12 and 18 by October, most states across India have reopened schools and a few more are expected to reopen them in the coming weeks. With a slew of measures mandated to prevent the spread of COVID like adherence to masking, social distancing, and hygiene & sanitation, though many schools complied and some are aware of what’s to be done, but stretched for resources while management in some schools is not fully aware of the dos and the don’ts.

With data in countries like the UK, Switzerland, the USA, and many other countries showing how cases increased post-reopening of schools, especially with the delta variant, India must learn from what has worked there and what hasn’t in order to have a model which balances reopening of schools with safety. In the last LocalCircles survey released in mid-August, 53% of parents were willing to send their children to schools while 44% were still hesitant. To convert the hesitant parents, it is critical that the ones whose children are going to school, their concerns are effectively addressed. In the online communities on LocalCircles, several parents appreciated how mask compliance was working well in their child’s school, some others raised concerns about poor indoor ventilation, indoor eating in classrooms and schools conducting assemblies in indoor spaces.

To quantify what is working well and what needs improvement, LocalCircles reached out to parents whose children are now going to school, in many cases for as long as 30-45 days. The survey which received over 38,000 responses from parents located in 388 districts of India focused on how masking, social distancing and hygiene & sanitisation protocols were being followed in classes and schools where their children go. Also, it attempted to understand how children were eating in schools, whether they found the assemblies safe, and if classrooms have good air ventilation.

The first question in the survey sought parents’ pulse about the parameters the schools their children go to is complying effectively. In response, 4% said “(1) masking”, 2% said “(2) social distancing”, and another 4% said “(3) hygiene & sanitation”. Breaking down the poll, 14% said school is complying with both “1 & 2” from the aforementioned options. 2% said schools are complying with both “2 & 3”, 14% said “1 & 3”, while 52% said all “1, 2 & 3” options. There were also 4% of parents who said “none of the areas”, and 4% did not have an opinion. On an aggregate basis, 84% of parents whose children are now going to school say mask compliance is effective while 70% feel social distancing, hygiene & sanitation compliance is effective. This question in the survey received 11,119 responses. 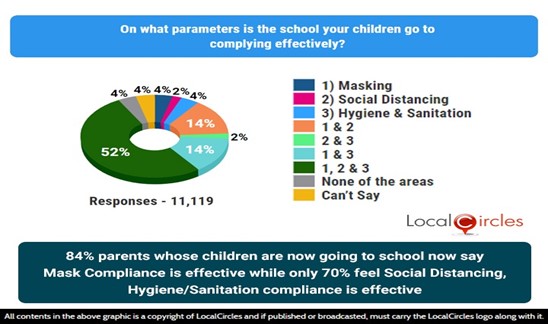 If feedback given by parents is evaluated on the basis of priority, 84% of parents say that “masking” is effectively followed in schools their children go for taking physical classes. 72% said “hygiene & sanitation”, and 70% said “social distancing”. It is noteworthy that 52% of parents said compliance on all the 3 fronts is working effectively. 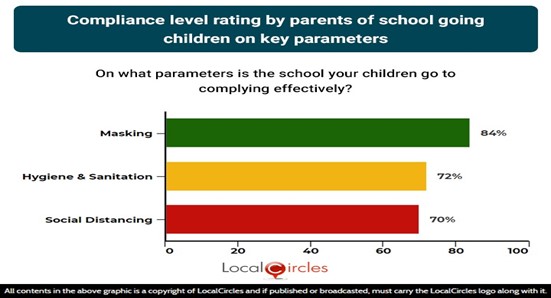 It should be noted that larger size SARS-CoV2 droplets fall on the ground and surfaces, and smaller aerosol particles are carried in the air to greater distances. Scientific findings indicate that there is no evidence to suggest that handling food or consuming food is associated with COVID. However, it is important for students attending classes physically to maintain social distance, especially in common areas like the cafeteria given the highly transmissible nature of the Delta variant as any asymptomatic students could potentially be spreading more virus particles indoors.

The following question sought parents’ observation about how schools that their children or grandchildren go to are managing the process of children having their snack/lunch. In response, 41% of parents said there is a “shorter duration school so no snack or lunch” time is given. Another 41% said “children are eating snack or lunch in class”, and 6% said “children are eating outdoors”. 12% of parents couldn’t say. This question in the survey received 10,345 responses.

41% parents have indicated that their children are having their lunch or snack indoors while only 6% said that they were eating outdoors. Given the pleasant weather in most parts of India in the months of September – November, schools must find a way to take children out during the lunch break instead of eating indoors. Eating requires a mask to be put aside and increases the risk of COVID aerosols of an infected asymptomatic child being inhaled by other children putting them at risk. An alternate to eating outdoors is no eating in school and shorter duration school sessions. 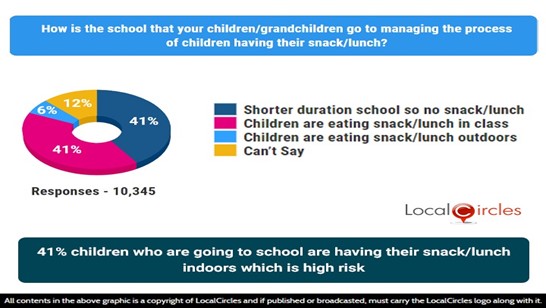 51% parents say assemblies are being conducted in their child’s school; 19% say they are being held indoors

While advocating the reopening of all schools in the country, the consortium of public health experts, The Indian Association of Preventive and Social Medicine, have advised schools to refrain from holding morning assemblies. The State Governments of Rajasthan, Madhya Pradesh, Bihar have also advised schools to avoid holding morning assemble due to fear of COVID spread. The following question sought to know from parents about the school their children or grandchildren go to are conducting assemblies. In response, 32% of Indian parents said schools are holding “assemblies outdoors with mask and social distancing”. 5% said “assemblies are taking place indoors with mask and social distancing, 14% said it’s taking place at a reduced frequency with masking and social distancing. Breaking down the poll, 36% said “assemblies are not being conducted at all”, while 13% couldn’t say. On an aggregate basis, 51% of parents say assemblies are being conducted in their child’s school, while 19% say they are being held indoors. This question in the survey received 16,841 responses. 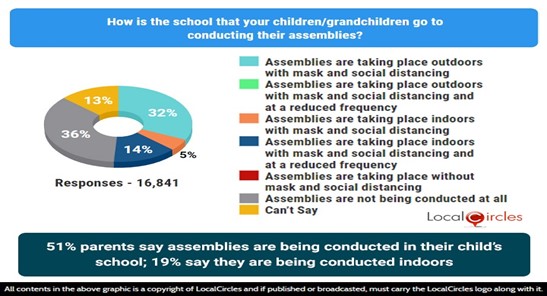 Similar to not eating indoors, an indoor assembly also has higher risk of COVID spread as in many schools the entire junior or senior school children congregate for an assembly thereby compromising on the social distancing norms in many cases. In assemblies, typically children or teachers speak, sing or talk without their masks and that puts at risk a large number of children and other teachers. 19% of parents in the survey confirmed that their child’s assembly was taking place indoors. To minimise the risk of Delta variant either the assemblies should be held outdoors or should not be held at all.

The US-based Center for Disease Control and Prevention has highlighted that the classrooms must have good outdoor air ventilation as it is one of the most important components to prevent the spread of COVID. It recommends opening windows and doors of classes so that outside air can circulate, using fans to increase the effectiveness of open windows, along with regular servicing of ventilation systems, deploying air purifiers where possible and using exhaust fans in toilets. 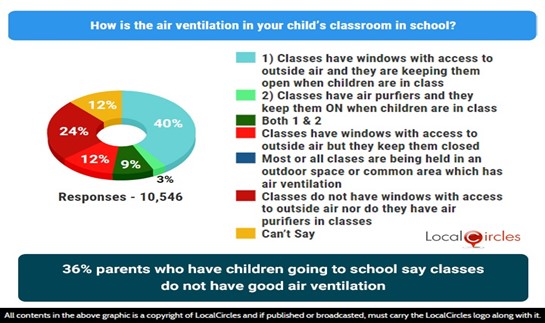 In summary, the findings of the study indicate that majority of parents believe that “masking”, is being effectively followed in schools with 84% saying that the compliance is effective. On the other hand, parents rated “social distancing”, and “hygiene & sanitation” at 72% and 70%, respectively, suggesting that these are the areas that State Governments must enforce strict guidelines for schools to follow. Parents are concerned about indoor eating, indoor assemblies and no outside air ventilation in some schools.

The need of the hour according to parents is for schools to improve compliance on social distancing and hygiene front and reduce indoor activities without masking like eating lunch/snack or having assemblies. Such activities should be moved outdoors if possible or not held. All possible efforts should be put in by schools to have outside air ventilation in classes and keeping all doors and windows open. If the classrooms do not have windows, schools may also consider having all or at least some classes outdoors.

In addition, the schools must make it a point to encourage the mandatory use of N-95 or KN-95 masks for all children and staff to minimise the risk. The latest estimates by researchers based on data released by the American Conference of Governmental Industrial Hygienists (ACGIH) suggests the time required to reach an infectious dose for an individual from an infected individual if both are wearing an N-95 mask and are 6 feet apart is 167 hours of exposure for regular SARS-COV2 and 68 hours of exposure for Delta variant. If the N-95 mask is well fitted in both cases, the research indicates that it requires 677 hours of exposure to reach an infectious dose. In the context of schools what this indicates is that if N-95 masks are made mandatory and social distancing and hygiene protocols are followed along with all “no mask” activities only taking place outdoors, the likelihood of transmission goes down to near zero. With viral fever spreading currently in many parts of India, using the above N-95 mandatory mask approach will also protect children against it.

In summary, according to feedback from parents, experts and LocalCircles internal research, the following are the do’s and don’t’s for COVID safety in schools 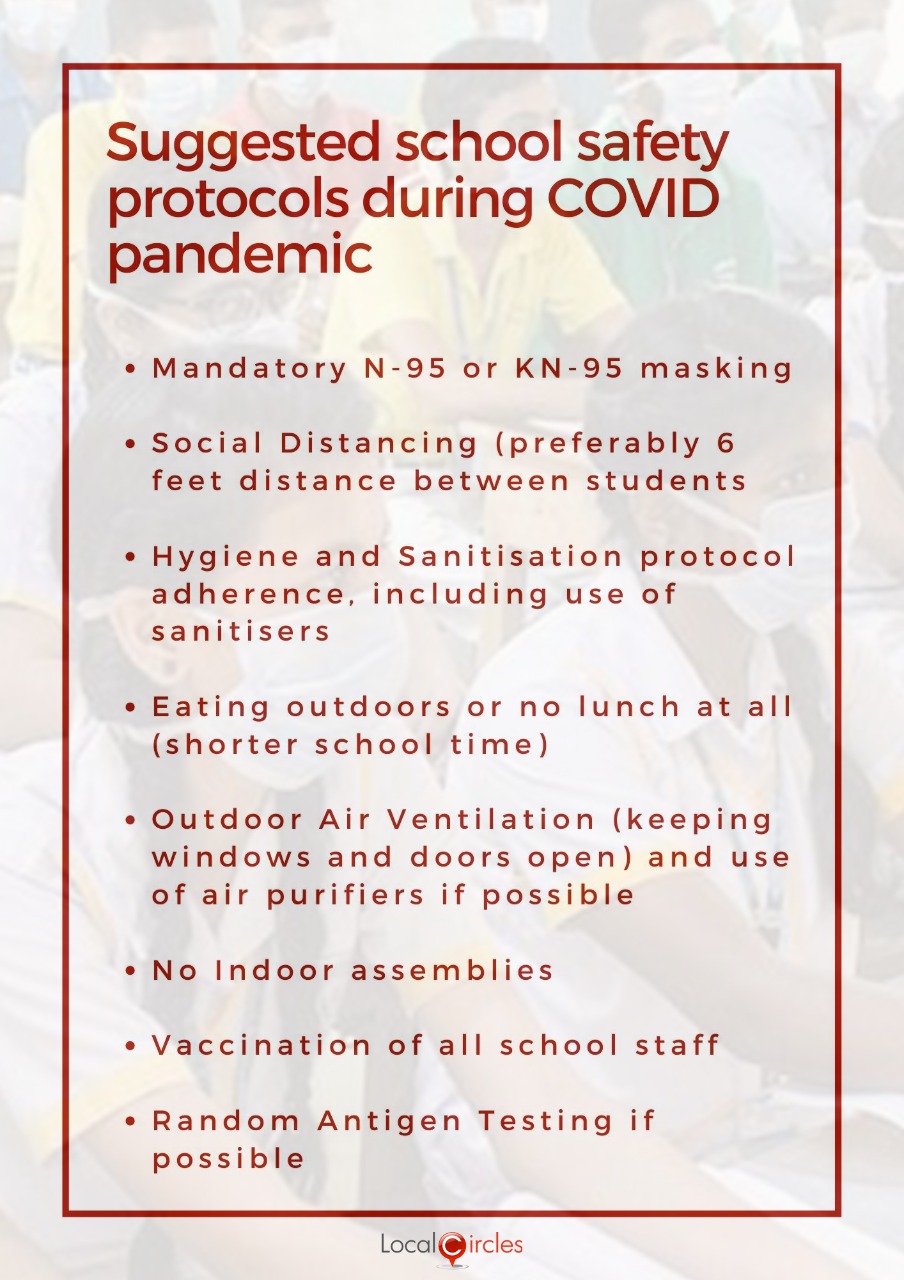 LocalCircles will share the findings of this survey with key stakeholders in the Central Government and Chief Secretaries of all states so inputs of parents can be considered and any course corrections are implemented in a timely manner such that the risk of COVID spread via schools reduce further and more parents who are hesitant start sending their children to school.

The survey received 38,000 responses from parents residing in 388 districts of India. 65% of the participants were men while 35% were women. 48% of respondents were from tier 1 districts, 29% from tier 2 and 23% respondents were from tier 3, 4 and rural districts. The survey was conducted via LocalCircles platform and all participants were validated citizens who had to be registered with LocalCircles to participate in this survey.