As COVID cases grow by over 26 times in last 3 weeks, 52% parents do not want to send children to schools

January 7, 2022, New Delhi: Schools and colleges were the first to shut down as cases of COVID-19 started to surge in both 1st and 2nd waves of the pandemic. Now that a more transmissible Omicron variant is driving a massive surge in COVID cases with cases growing by 26 times (from 5300 on Dec 20th to over 140,000 on Jan 7th) in last 3 weeks, a survey conducted by LocalCircles indicates that 52% parents are not willing to send children now for in-person school. The survey which received 11,025 responses from parents located in 335 districts of India is the 12th survey by LocalCircles since the pandemic begin to gauge the willingness of parents in sending children to school. 45% of the parents that responded were located in metros or Tier 1 districts, 29% were located in Tier 2 districts and 26% parents were located in Tier 3, 4 or rural districts.

The first question in the survey sought to understand parents’ willingness to sending their children or grandchildren to attend in-person school given the rising COVID cases and the highly transmissible nature of Omicron variant. In response, 18% said they are “Already sending children to school and will continue despite Omicron”, and 25% said “Whenever the schools reopen”. There were, however, 10% of parents saying they are willing to send their ward to attend in-person schools till cases start declining and “TPR in district/city goes below 5%”, 10% want the “TPR to be below 2%”, another 10% want the “TPR to be below 1%”, 12% want the “TPR to be below 0.5%”, and 10% will only send children to school when there are zero cases of Covid in in their district/city. On an aggregate basis, 52% of parents do not want to send children to school if cases in their district or city are growing and Test Positivity Rate is above 5%. 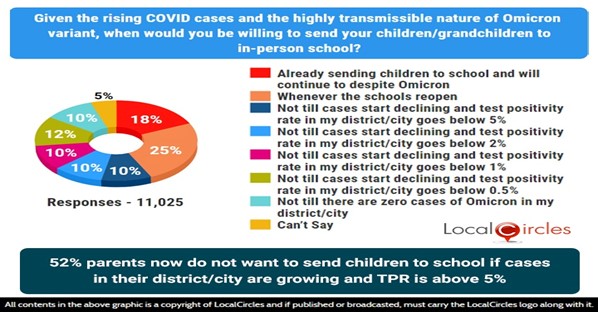 While many parents are concerned about the lower effectiveness of online education and some others about the loss of education due to no online facilities, the biggest issue according to parents with in-person school at this time is poor air ventilation in classrooms and lack of social distancing. The Omicron variant, found to be 3-5X more transmissible than the previous variants, poses the risk of fast spread among children and from them to other members of the family. 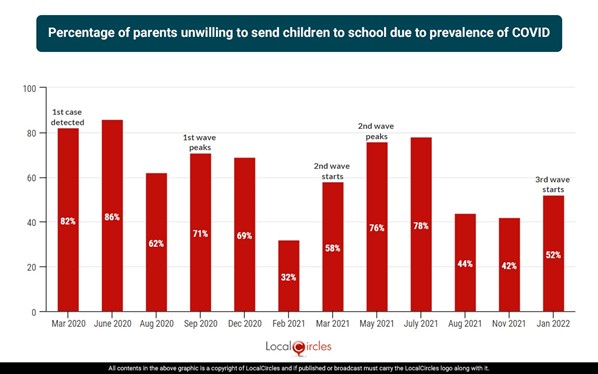 LocalCircles has been closely tracking the parents’ willingness to send children for in-person school since the pandemic started found in February 2021 that only 32% of parents were unwilling to send their children to school. However, as daily cases led by the Delta variant started to increase during the 2nd wave, this percentage increased to 58% in March, surged to 76% in May. Then, as the cases started to decline, the percentage of parents unwilling to send their children to school also started to decline to 44% in August 2021. Schools in most states of India were opened for in-person classes in August or September last year and continued till November when the percentage of unwilling parents was at 42% However, as cases rose in December and a third wave just commencing, the percentage of unwilling parents has risen to 52%.

Due to the rapid surge of new cases in the country, several cities and states including Delhi, Odisha and West Bengal have announced closure of schools. While schools remain shut in Mumbai, schools in other parts of Maharashtra continue to function in-person. Similarly, the Rajasthan government has closed government and private schools for classes 1 to 8 in Jaipur, classes 9 and above continue to function in-person in Jaipur while other cities in the state have not received any guidelines for school closure. Some states have closed schools only for primary classes. Madhya Pradesh is also continuing in-person classes at 50% capacity. Andhra Pradesh also continues to keep in-person schools open despite 20 people in a government school testing positive. In Gujarat, 10 schools have been directed to close with 150 students found positive in the last 2 weeks. However, the offline classes continue to function in most parts of the state. While Haryana and Punjab have announced closure of schools, Chandigarh continues to operate schools offline.

According to Sachin Taparia, Founder of LocalCircles, “we as a country are going into a very critical period and the risk of large number of children getting infected with Omicron leading to more infections in their families is very high”. “Unless a district or city is COVID free or has really low levels TPR, our recommendation to the Central Government and State Governments would be to switch to online education and enable the same via mediums like internet, television, radio, etc. for rural locations atleast till end of February”, continued Taparia.