62% parents in favour of mandatory masking for children and staff in schools while they are indoors, 52% in favour of no masking outdoors

April 9, 2022, New Delhi: India, which experienced a steady decline in daily COVID-19 cases falling below the 1000-mark till April 3rd, is starting to see a mild increase with over 1000 cases reported today while the effective reproduction rate increased from 0.3 to over 0.6. The effective reproduction rate represents the average number of new infections caused by an infected individual. The number becomes concerning once it exceeds 1. With cases hitting a new low last week across states including Maharashtra, Delhi, Uttar Pradesh, Telangana, Haryana and Punjab, members in LocalCircles are reporting near-zero enforcement of the COVID mandate. However, the World Health Organisation (WHO) has raised an alarm regarding rising COVID cases globally despite testing levels dropping significantly.

Notably, many countries in Europe like France, the United Kingdom, Germany, Netherlands as well as Asian countries like Hong Kong, South Korea, Vietnam and China are experiencing a surge in COVID cases. China has currently put over 50 million people in lockdown, including those at major business centers like Shenzhen and Shanghai after reporting an increase in daily cases, reminding the world of January 2020, when the initial surge was reported in Wuhan, China. The Center for Disease Control in China has issued a stark warning on Deltacron, calling it a grey rhino as opposed to a black swan, citing it as the worst recombination event involving large genomic fragments since SARS-CoV-2 was found. A new variant XE, which is a BA.1 and BA.2 recombinant, is also being tracked closely with 10% higher transmissibility than the base Omicron variants. Overall, scientists are tracking 5-6 new variants of COVID across different countries, and one or more of these variants is thought to be highly transmissible causing severe illness at the same time.

India, in its 3rd wave led by Omicron, experienced a mild impact of the virus from a hospitalisation or severity standpoint. As Omicron cases declined from mid-January to late March, India resumed commercial international flights, lifted most of the COVID restrictions across public places, and schools also opened from early March across most states and UTs. In the last 2 weeks, however, the Genomics Consortium (INSACOG) reported 16 cases of BA.2+S:I1221T or the BA.2.2 sub-lineage of Omicron, which is known to be causing the latest surge in Hong Kong. Further, over 560 cases of Deltacron, a combination of Delta and Omicron variant, were also reported in India till the last week of March. In such a scenario, the big question that many are asking is, can we drop the mask mandate completely across all states and should masks be removed from schools too, or are we jumping ahead of ourselves? 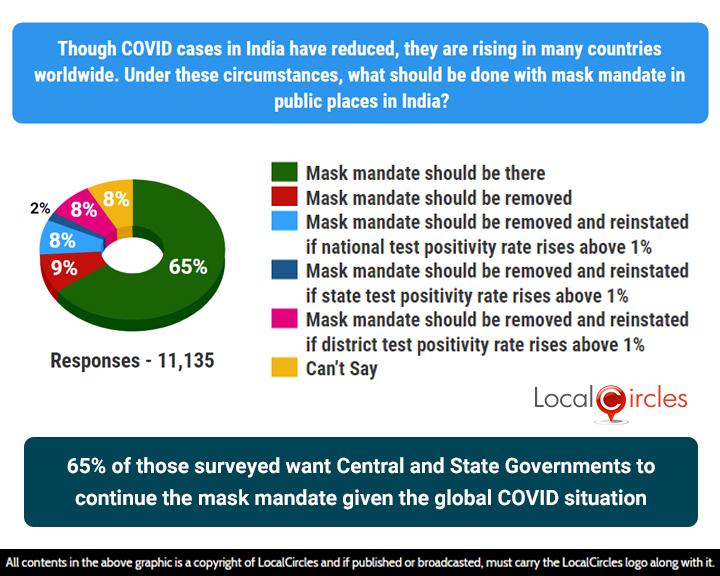 In a survey released earlier this week by LocalCircles, 9 in 10 parents had indicated that most people in their areas are either don’t have a mask, or aren’t wearing the mask though they have, or not wearing it properly. Some of the participants criticised the state governments that have removed mask mandates, stating that this move will mark an end to the pandemic from a people’s perception, making the situation highly vulnerable in case India experiences a 4th wave in the coming months.

With current COVID scenario in India, 62% parents in favour of mandatory masking for all in schools while they are indoors, only 43% in favour of masking outdoors

In states like Delhi, some parents have urged the State Government to make the use of masks optional at schools. However, many others want masking to be mandatory and children be given mask breaks outdoors. With the daily temperature surpassing 40 degrees in most parts of India, it is difficult for children to be with masks for 7-8 hours continuously. 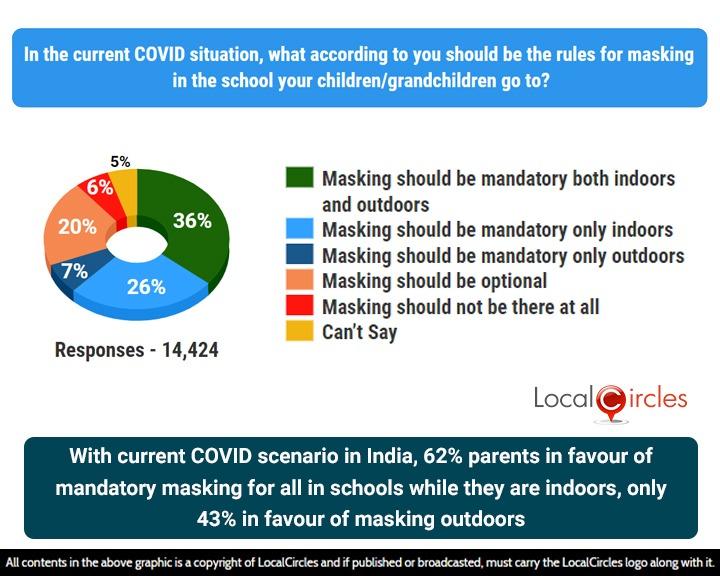 In summary, as COVID cases are increasing in many countries with 5-6 variants being tracked, and with international flights operational, it is only a matter of time before India starts reporting an increase in cases led by some of these variants. In such a scenario, 65% of Indians want Central and State Governments to continue the mask mandate. Some citizens are in favour of the mask mandate if the daily TPR crosses 1% and above at district, state or national level.

LocalCircles will escalate these findings to Central and State Governments for their review and action. It is critical that India’s vulnerability is minimised in the event of a 4th COVID wave.