July 7, 2021, New Delhi: When schools were shut down amidst the first outbreak of the COVID-19 last year, many parents were confused and worried as they didn’t know how schools were going to operate. In the aftermath of over a year into the pandemic, parents are now quite well prepared and even children have gotten used to taking online classes at home and follow the school schedule. Many households’ earnings were impacted as a result of the lockdown with 1 or both working members seeing their earnings decline. Though school classes continued to take place online in most urban and semi-urban locations for most of 2020, the schools continued to charge full tuition fees from parents. In some locations across India, schools reopened in February and March 2021 and then followed the 2nd wave of COVID-19, which reached its peak during April-May 2021 followed by subsequent lockdowns and curfews that once again made a significant impact on household earnings. Schools were shut down once again for physical classes in April and continue to function in online mode where such facilities are available. NITI Aayog member Dr. Vinod Paul has stated that the decision to reopen schools must be taken “cautiously”. Medical experts have also stated that given the risk of SARS-COV2 variants, it is likely that physical schools may have to stay shut till the vaccines for children are administered. A recent survey by LocalCircles has revealed that 76% of Indian parents are not ready to send their children to school till cases in their district go down to zero or children get vaccinated. The same survey found out that the percentage of parents who will send their children to school has reduced from 69% to 20% in 4 months. Amidst hesitancy to reopen schools in most states, as well as the plight of parents to send their children for physical classes, schools are likely to continue in the online mode for the foreseeable future.

As the school sessions have started again in full flow in online mode across most urban and semi-urban locations of India, LocalCircles in the last 30 days has seen a series of complaints from parents talking about an increase in tuition fee for their child despite the classes being held online. There has been unrest amongst parents of school-going children regarding the hike in school fees by private schools. Last month, Hyderabad, Bengaluru and Pune witnessed protests from parents against a hike in school fees by private institutions. Some parent associations also escalated the matter to the court. Taking cognizance, states like Uttar Pradesh have directed schools not to hike the fees for the academic session 2021-22 in the interest of students and parents. Even the Supreme Court has said the management of educational institutions should not insist on payment for facilities not provided to students.

Given all the conversations amongst parents, LocalCircles has conducted a survey to understand what Indian parents think about the overall fee structure implemented by their children’s schools for the academic year 2021-22. It also sought to understand the hike in school fees parents were observing on an aggregate basis.

With education being a state subject, the survey also tried to gather citizens’ pulse about the effectiveness of their respective State Governments to top the increase in school fees in light of the current circumstances. The survey received over 26,000 responses from citizens in 302 districts of India with 48% respondents from metro or tier 1 locations, 28% from tier 2 locations and 24% from tier 3, tier 4 and rural locations.

The first question in the survey asked parents what they think about the overall fee structure implemented by their children’s schools for the year 2021-22. In response, 33% of citizens said there has been “more than 20% fee increase from 2020-21”, and 23% said there has been a “10-20% fee increase” during the period. Breaking down the poll, 7% of parents surveyed said there was a “0-10% fee increase from 2020-21”. Furthermore, only 1% of parents said schools reduced fees by “10-20% from 2020-21”, and just 2% said there was more than “20% fee reduction” during the period. There were also 22% of the citizens who said that there was “no fees increase from 2020-21”, while 12% did not have an opinion. On an aggregate basis, 63% of parents are saying that the school their children go to has increased fees this year despite classes being online. This question in the survey received 15,950 responses. 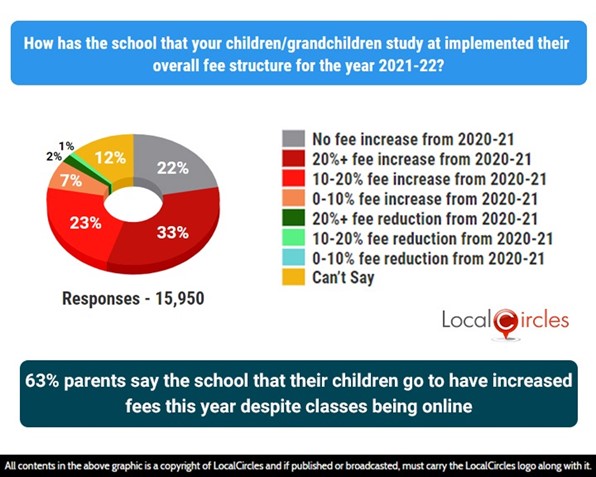 Alternatively, it was found out that 33% of parents say that schools their children go to have increased fees by over 20% this year despite classes being online. 23% say school fees increased by 10-20%, while 7% say it increased from 0-10%. There were also 25% of parents who said that the fee of the school their children attend remained the same or reduced. 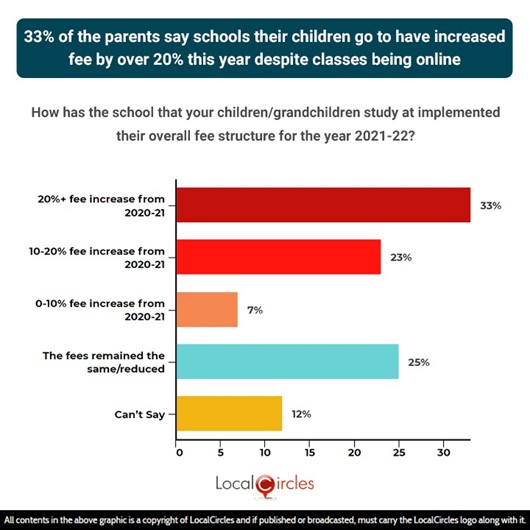 The Supreme Court ruling in May 2021 provided some relief to students and parents, ordering a minimum 15% reduction in school fees. The Court stated that the collection of this 15% would be “a case of profiteering and commercialisation by school management”. Additionally, the school management is not permitted to debar students from attending online or physical classes or withhold the results of students if they fail to pay the fees. Recently, the Uttar Pradesh Government directed all the schools not to hike the fees for the academic session 2021-22. It passed a mandate stating that if any school has charged a hiked fee for the new session, the additional amount will be adjusted in the coming months. 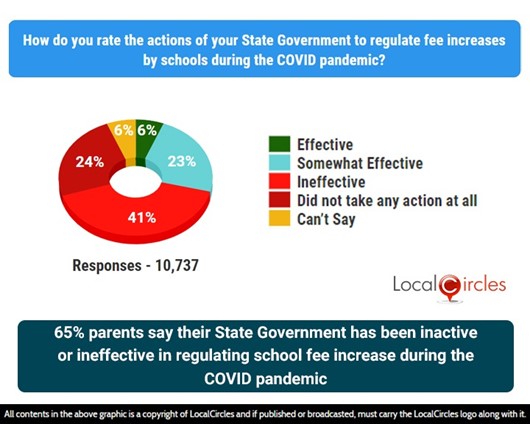 The shift to online classes has drastically reduced the expenditure incurred by schools on electricity, maintenance, equipment usage, contract staff like guards, housekeeping, and other miscellaneous costs. Additionally, according to many parents, it is not fair to charge students for facilities that the school is no longer providing due to the pandemic. School managements argue that some of the gains have been offset by an increase in digital costs of education delivery and equipping teachers.

The pandemic has negatively impacted the earnings of many parents, and with schools continuing to increase fees, it has become an additional burden for many households. This is evident with 63% of parents surveyed saying that the school their children go to has increased fees this year despite classes being online. Of those, 33% of parents say that the fees have increased by over 20%. Said that even the State Government has been doing a little to bring down the rising cost of children’s education as 65% of parents say their respective State Government has been inactive or ineffective in regulating school fee increase during the COVID pandemic.

State Governments must ensure that private schools in their respective state adhere to the Supreme Court ruling and introduce a 15% reduction in school fees. Schools, on the other hand, must find ways to optimise physical facility and maintenance costs till the time physical classes are ready to resume, which at this point looks likely for most schools only in 2022.

The survey received more than 26,000 responses from citizens residing in 302 districts of India with 48% respondents from metro or tier 1 locations, 28% from tier 2 locations and 24% from tier 3, tier 4 and rural locations. 62% of the respondents were men while 38% were women.