POCSO ordinance on death penalty for child rape a good step but lots more to be done, say citizens

24th April 2018, New DelhiIn a news that would calm down some resentment amongst citizens post a series of child rapes across the country, President Ram Nath Kovind signed the executive order post cabinet approving the ordinance that calls for death penalty for child rape. Acknowledging the petition that was started on LocalCircles by the President of Confederation of Women Entrepreneurs, Mrs Uma Ghurka which got more than 25,000 signatures, the Centre had earlier passed an ordinance to amend the POCSO act and award death penalty to child rapists. LocalCircles had also conducted a survey to catch the citizen pulse on the POCSO Act.

According to this 6-poll Survey receiving more than 40,000 votes from across the country, a harshest of the harsh punishment is the first step but a lot more needs to be done to drastically reduce the cases of child rape. This was evident in the fact that on the day the President signed the ordinance, 10 cases of child rape were reported from across India.

The first question in the survey asked what the appropriate punishment for child rape should be. 76% respondents said it should be death penalty, 18% said life imprisonment without parole, 3% said it should be a 7-year jail term (current) and 2% could not decide. 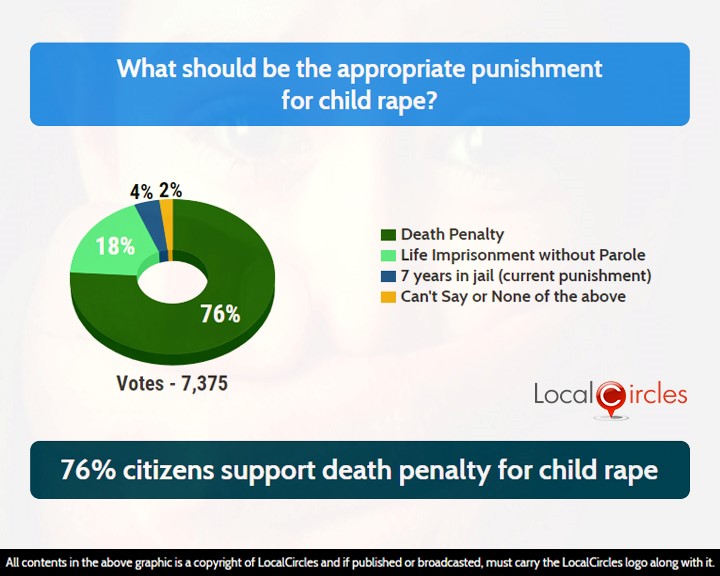 In the second poll, people were asked if they wanted their state to pass a law that awards death penalty within 6 months for cases of child rape. 89% agreed with it and said it should be done asap while 5% did not agree with it. 3% said yes and it is always done, while 3% were unsure about it. 4 states namely Madhya Pradesh, Rajasthan, Haryana and Arunachal Pradesh have also passed a law that awards death penalty for child rape. Uttar Pradesh CM Yogi Adityanath too committed last week to seek centre’s support on the same for his state. 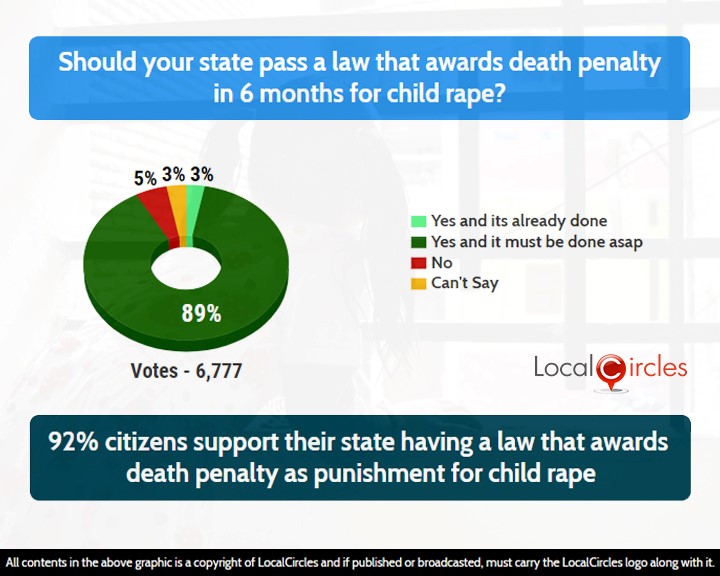 One of the key issues highlighted by many citizens in the LocalCircles discussions was the resistance shown by local police to register an FIR when a case of sexual assault or child rape is presented to them. Citizens suggested that women officers may be more receptive to registering cases. When the same question was posed via a poll, 78% citizens were in support of every district level police station to have at least one women officer. 13% did not support it while 9% were unsure. 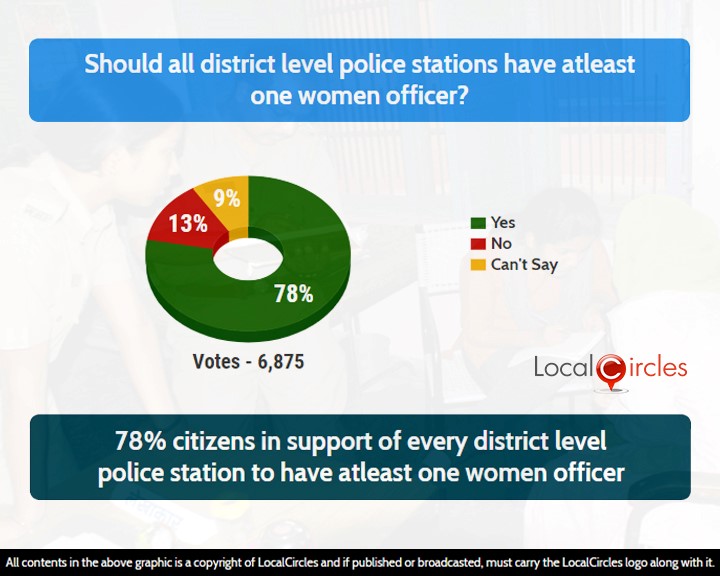 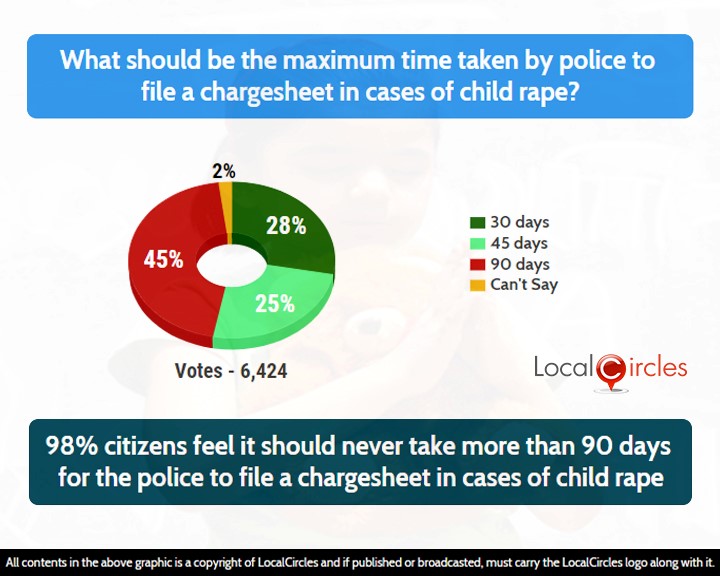 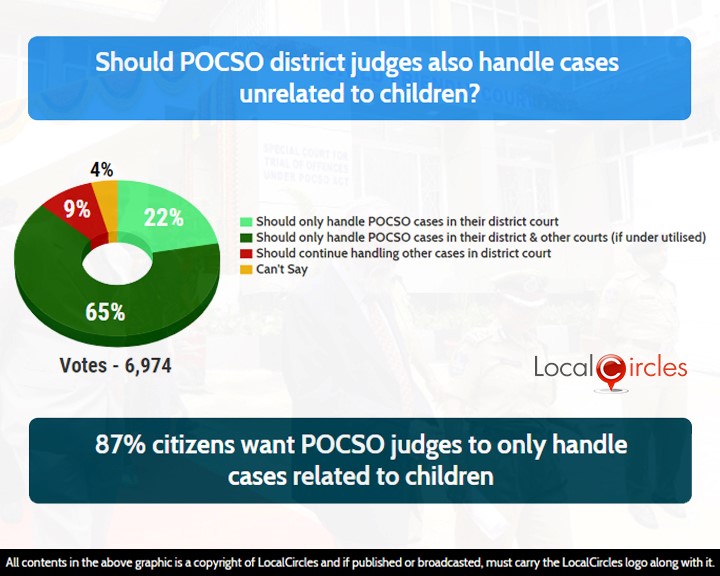 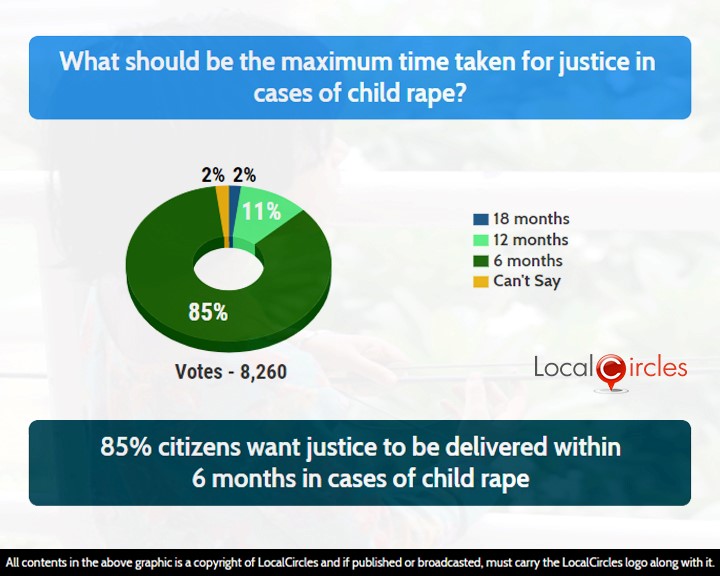 Many citizens feel that with faster investigation and trial, chances are that conviction rates will go up. Currently according to citizens with conviction rates of 25% or so in POCSO cases, the fear of law is mostly missing. About a third of the cases where chargesheet was filed between 2012 and 2016 are still open. In addition, given the statistics, in 80% plus cases the offender is known to the victim’s family (relative, friend, neighbour), the longer the investigation and trial, higher are the chances of the victim’s family getting influenced. Citizens also feel that there is a strong need for awareness and outreach about the new law so the message reaches all sections of the society.