September 16, 2021, New Delhi: When the GST subsumed central taxes such as excise duty and state levies like VAT on July 1, 2017, five petroleum goods - petrol, diesel, ATF, natural gas and crude oil - were kept out of its purview.

However, the rising prices of petrol in India hovering between INR 100-110 a litre in most cities and that of diesel between INR 90-100 a litre for almost 12 months now has had an adverse impact on how citizens commute, how much essentials and other goods cost, and how people draw up their personal finances, at a time when Indian households are recovering from the shock of a brutal 2nd COVID wave. In a LocalCircles survey conducted in first half of 2021, 51% households said that they have cut spending to cope with high petrol/diesel prices; 21% had even cut essentials spending and were feeling the pinch strongly while 14% expressed they were even dipping into savings to pay for it.

One of the demand that citizens have raised via LocalCircles in 2018 and again in 2020 has been of the Government moving petrol and diesel under GST. However, many states have been opposing such a move. Currently, the five fuels are subjected to central excise, cess and state Value Added Tax bringing in significant portion of the total state revenues. Similarly, Central Government too hasn’t been pushing for this change because of a sizable loss to central excise duty collections.

Given that the GST council is scheduled to meet again on September 17th, LocalCircles has conducted another survey to understand citizens’ pulse on whether petrol and diesel should be brought under the purview of GST. The survey received more than 7500 responses from citizens located in 379 districts of India. 61% of the participants were men while 39% were women. 44% of respondents were from tier 1 districts, 29% from tier 2 and 27% respondents were from tier 3, 4 and rural districts.

77% citizens want Government to bring petrol and diesel under GST

GST is a “single tax” applied all over India, with a set-off provision for tax paid on inputs. However, the constitutional amendment Act on GST, while providing for inclusion of crude oil, natural gas, petrol, diesel and aviation turbine fuel (ATF) under its ambit, had kept these products “zero-rated”. In the poll question that tried to understand if citizens want that petrol and diesel be brought under the GST tier structure, the majority of 77% of citizens said “Yes” that petrol and diesel should be brought under the GST system. Only 11% said “No”, while 12% “can’t say”. The question received 7,590 responses. 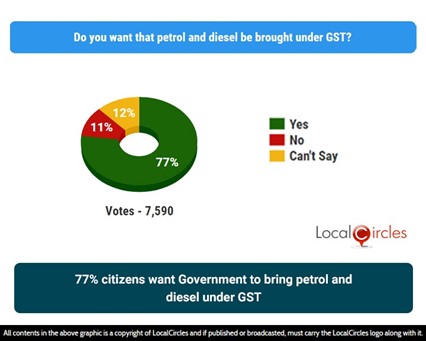 Majority of the Indian households want petrol and diesel to be moved under GST as it will immediately have a huge positive impact on the cost of living. Even at 28% GST rate the prices of petrol post such a move will slide to around INR 75 a litre and diesel to INR 70 a litre. This could give a huge impetus to the economy and businesses via increased consumer spending. However, both center and states will see loss of revenue in the short term. With the GST council discussing the subject on the order of Kerala High Court, it is a positive even if a decision on the issue is not arrived at in this meeting. As long as the process begins to migrate petrol and diesel under GST, most of these 77% will be happy seeing the light at the end of what has been a very dark tunnel this past year.

LocalCircles will share the findings of the survey with the Ministry of Finance and the GST Council Secretariat so that the public feedback on the issue is given the needed consideration.

In an earlier survey this year, LocalCircles tried to understand how people are coping with the rising petrol and diesel prices, 3% “have some extra savings because of lower discretionary spending in the last 12 months”, 1% “have some reserve funds due to extra earnings in the las 12 months”, 14% are “using savings to pay for it”, 16% are “cutting discretionary spending”, and 21% said “cutting spending on essentials and it is painful”. There were also 43% of citizens saying “my monthly petrol or diesel bill is lower due to limited commute or work from home, etc.”, and 2% said “my monthly petrol or diesel bill is zero due to no commute or work from home”. Per aggregate response from people, 51% of Indians are cutting spending to cope with high petrol/diesel prices; 21% are cutting essentials spending and feeling the pinch, 14% are dipping into savings to pay for it. This question in the survey received 7,989 responses. 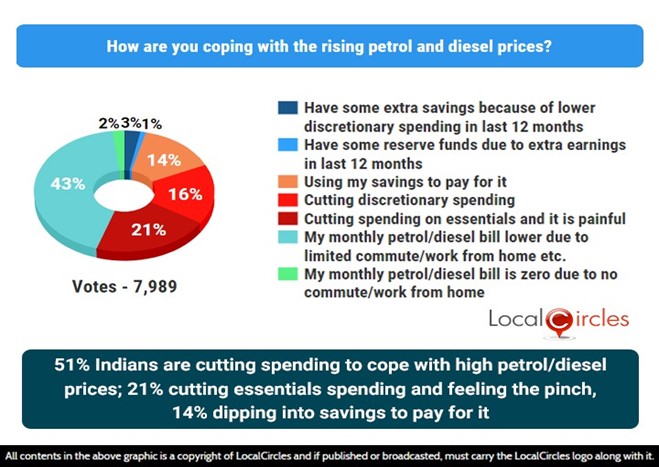