69% citizens want the Government to reduce petrol and diesel excise duties, with the majority in favor of reduction by 6 rupees or more

January 8, 2021, New Delhi: The price of petrol in Delhi has crossed INR 84 per liter and the price of Diesel has crossed the INR 74 per liter threshold. After holding steady for 29 days, the petrol and diesel prices have again started rising. Of the INR 84 per liter that commoners pay at the pump, the actual value of the petrol is only INR 26 while the rest are taxes, duty and dealer’s commission. The Central Government charges INR 32.98 (125% of the base price) as excise and the Delhi government levies INR 19 (72% of the base price) per liter on petrol Value-added Tax (VAT). Similar levies in commission and taxes are applied for diesel. When the prices of petrol and diesel rise, it has an adverse impact on how individuals commute, how goods are shipped, and how people draw up their budgets. After hundreds of posts and comments received from people across the nation, LocalCircles conducted a survey to understand citizens’ pulse on what the Government should do to provide immediate relief on petrol and diesel excise duties, an indirect tax paid to the Government by producers of goods.

Via the survey, people were asked, “Though the Government is in a tight spot financially, what should it do to provide immediate relief to citizens on petrol and diesel prices?”, 9,326 responses were received. Individual responses suggest that 31% want the excise duty to be cut by 20% on both, 20% and 18% of citizens want a flat cut of INR 10 and INR 15 on both, while 27% said that there’s no need for action. 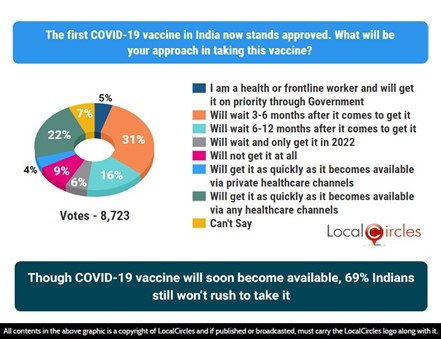 The aggregate percentage of responses from 69% citizens want the Government to reduce excise duty on petrol and diesel. Of which, the majority of citizens want the prices to be reduced by 20% or by INR 6 or more for both petrol and diesel. This if done will reduce the price of petrol to INR 78 per liter and diesel to INR 68 per liter in Delhi and similarly across India where the impact to the citizens is even higher. Delhi has one of the lowest prices of Diesel and Petrol in the country.

LocalCircles will be escalating the same to the relevant stakeholders in Central Government for their due consideration and action.