35% citizens do not trust the Pathology Lab they use; want Government to cancel licenses if they are found incentivising Doctors 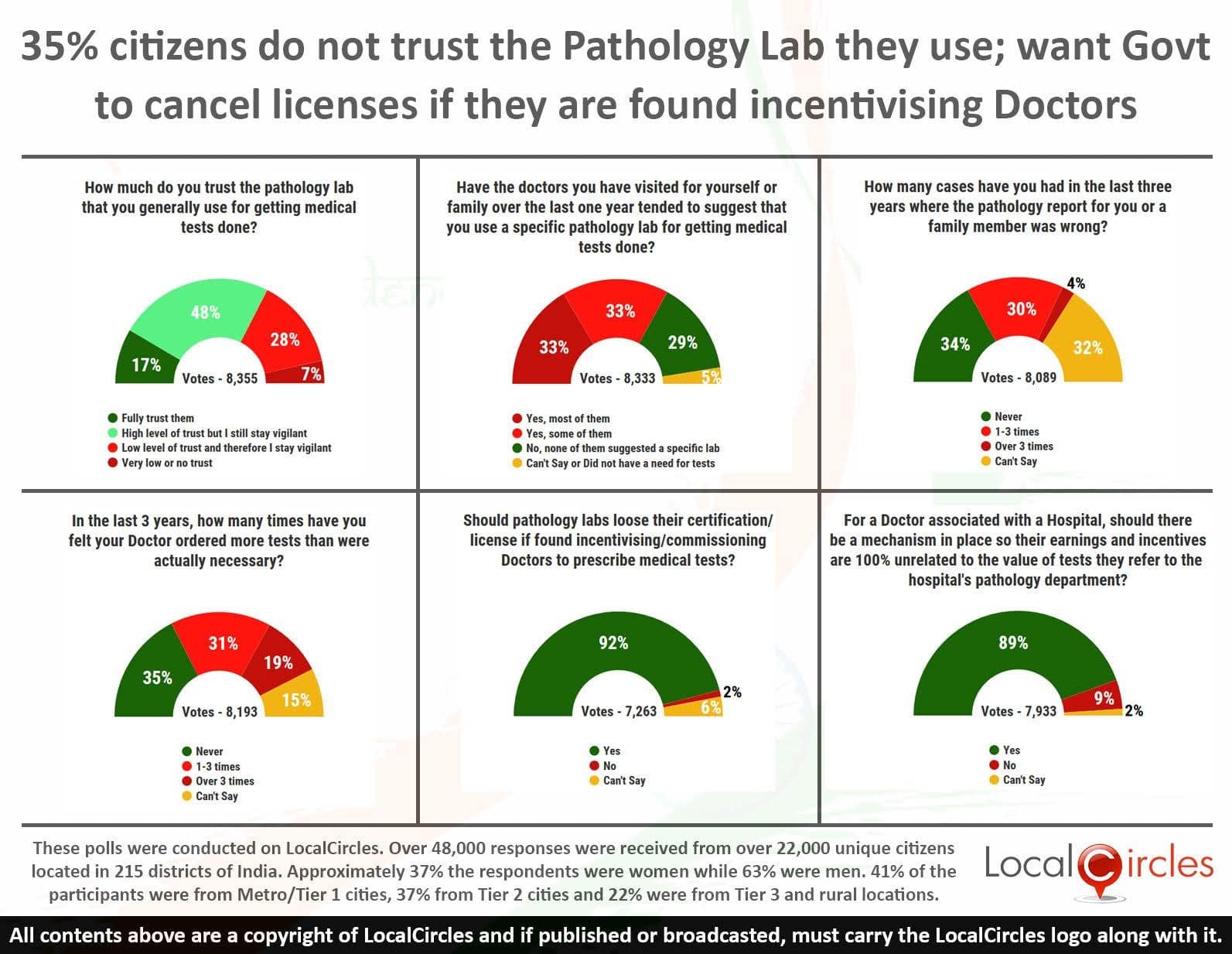 January 2, 2020, New Delhi: Many small pathology labs have mushroomed across the country in the last decade and now we receive flyers of neighborhood labs with the newspaper. Citizens over the last 24 months have been raising the need for better regulation of pathology labs on LocalCircles. After the consumer protection act 2019 was cleared in the parliament, consumers have been requesting that rules be made around consumer protection in the healthcare sector and within healthcare, functioning of pathology labs has been a top area of citizen concern, just after functioning of hospitals. To get a collective citizen pulse on this issue, LocalCircles conducted a 6-point survey which received more than 48,000 responses from across the country.

The first question asked as a startup or SME, what do they foresee as their top challenge in 2020. Amongst others, 31% said raising funds/loans, 10% said finding growth, 13% said corruption, 22% said bureaucratic inefficiencies and 20% said survival of the business would be their key challenges.

35% citizens don’t trust the path lab they use, another 48% trust but stay vigilant 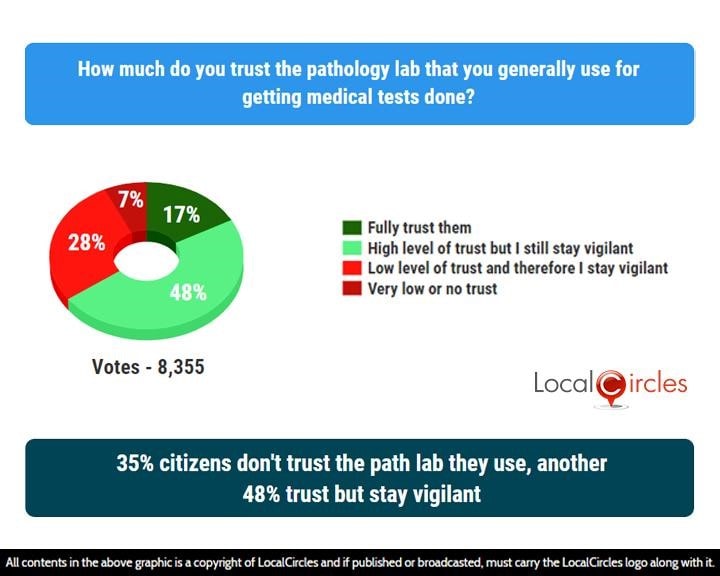 ‘Sink tests’ have become quite common nowadays where a lab takes your sample only to throw it in a sink and generate a false report, causing much distress among the patients.

The next question asked if the doctors they have visited for themselves of their family over the last one year tended to suggest that they use a specific pathology lab for getting medical tests done. 33% said most of the doctors did it while 33% said some of them did it. Only 29% said none of the doctors indulged in this behaviour. 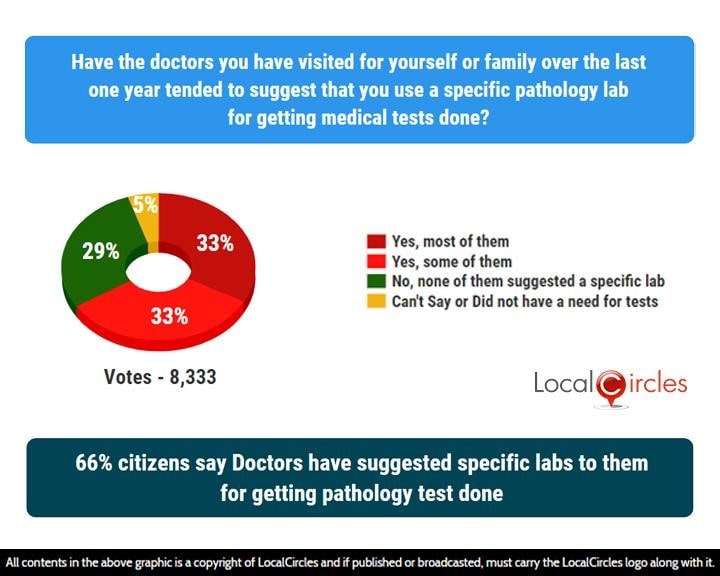 Consumers have also reported that their doctors force them to get the tests done from a specific lab in their area saying it is better than others or that they would send reports directly to them. 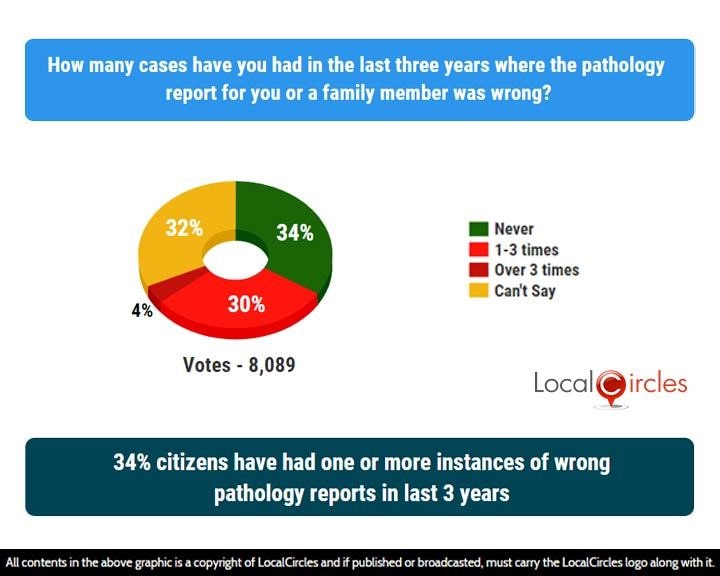 Many consumers had reported that their doctor asks them to get general tests like blood count, urine test, LFT, KFT etc. done quite often, even if there might not have been a need for it.

Next question asked how many times in the last 3 years did they feel that their doctor ordered more tests than were actually necessary. 35% said never, 31% said 1-3 times, 19% said more than 3 times and 15% said they were unsure. 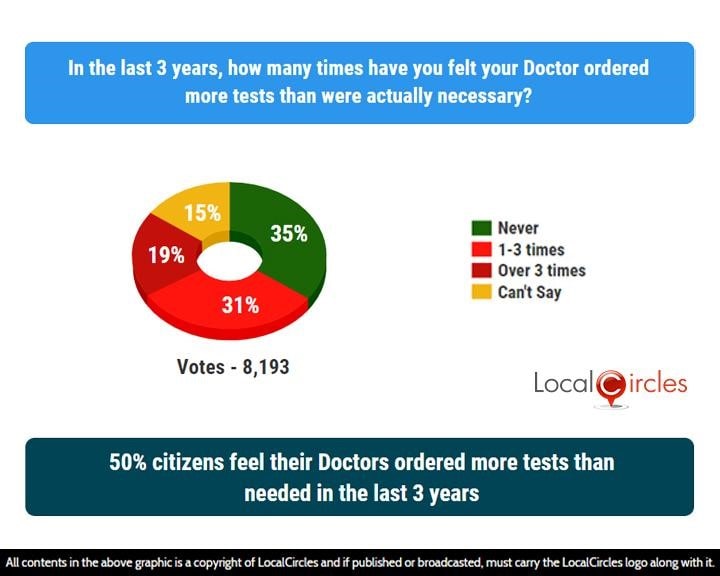 Recently, an audio clip of a doctor talking to a pathlab representative went viral on social media, where they were talking about commission on prescribed tests and generating false reports.

The penultimate question asked if pathology labs should lose their certification license if found incentivising/commissioning doctors to prescribe medical tests. 92% said ‘yes’ while only 2% said ‘no’. 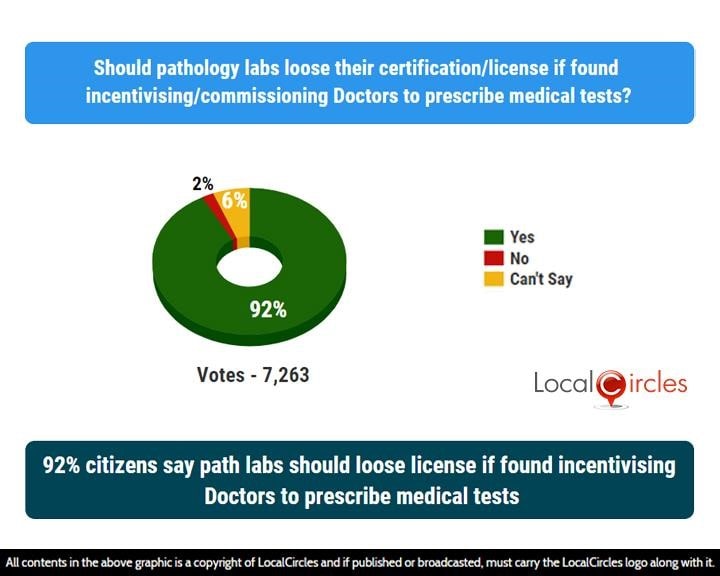 Many of us have heard stories of how the remuneration of doctors in hospitals is linked to the amount of business they get for the hospital. This leads to doctors prescribing unnecessary tests and keeping the patients in hospitals for a longer time than actually required.

89% citizens in the final question said that doctor’s earning in a hospital should not be related to the tests they refer to its lab. Only 9% said this should not be the case. 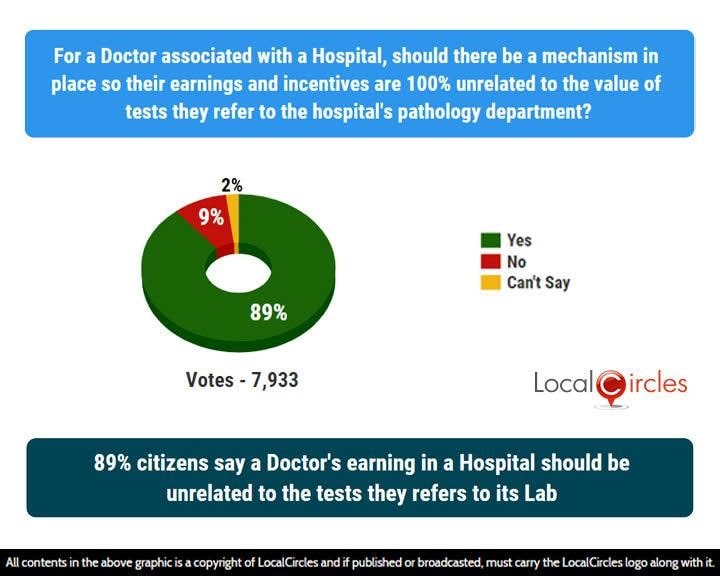 Clinical Establishment Act 2010 emphasizes on minimum infrastructure that pathology labs should have but it has still not been adopted by many states. The central Government should make sure that CEA 2010 is adopted by all states immediately and pathology labs are regulated under it. Also, as per the available stats, only around 1000 of the existing 100,000+ operational labs in India are NABL (National Accreditation Board for Testing & Calibration Laboratories) accredited and most laboratories are functioning illegally, often providing suspicious/incorrect reports to thousands of patients. For majority, their primary modus operandi to generate steady stream of business is to give commissions to doctors on their references. According to people, a ‘no doctor incentive’ should be made a mandatory requirement for any lab to get a NABL certification.

Wrong test results given to patients because of vested interests can have serious health repercussions and citizens are keen that Central and State Governments take urgent action to form laws that help break the doctor-path lab commission nexus. With the Consumer Protection Act 2019 in place, citizens are demanding that rules for Consumer Protection in Healthcare be made a top priority. Another recommendation made by some consumers is standardization of prices and price bands for various tests and mandatory displays of such prices to consumers beforehand. Per some consumers, standardization of healthcare services and billing should be undertaken by the Bureau of Indian Standards as an exercise as well.

All in all, the survey here highlights the mistrust that citizens have with pathology labs and how according to people there is a strong need to address the Doctor-Pathology lab nexus on the ground through the formation of clear consumer protection rules and then driving enforcement of these rules via the local health and consumer departments. LocalCircles will be writing to the various stakeholder departments of the Government urging them to act.

Over 48,000 responses were received from over 22,000 unique citizens located in 215 districts of India. Approximately 37% of the respondents were women while 63% were men. 41% of the participants were from Metro/Tier 1 cities, 37% from Tier 2 cities and 22% were from Tier 3 and rural locations.