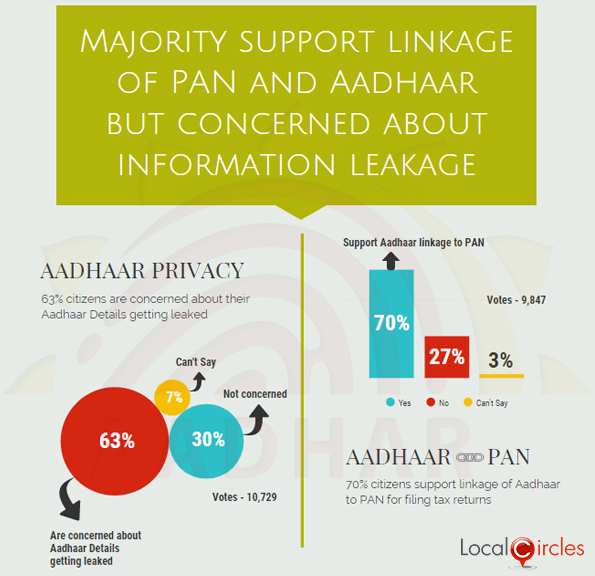 16 May, 2017, New Delhi: In the last 6 months the Government has expanded the ambit of Aadhar by mandatory linking of it to various social welfare schemes and last month the Government had made compulsory quoting of Aadhaar for filing of income tax returns. The Central Government has justified the law by terming Aadhaar as the most effective and fool-proof tool to check cases of tax evasion and keep tabs on black money circulation.

However, just recently, details of 13.5 crore Aadhaar accounts were published on a website highlighting vulnerabilities of the system. Also, Aadhaar of students of some Kendriya Vidyalaya schools were found on their websites. To understand the citizens pulse on the issue, LocalCircles, India’s leading independent citizen engagement platform conducted multiple polls. In the first poll conducted by LocalCircles on Aadhaar information leakage, 65% citizens expressed that they are concerened about their Aadhaar details getting leaked due to the existing process of getting the Aadhaar card made and the existing access protocols for vendors like banks, telecom operators etc. Only 26% said that they are not concerned, given the security measures around Aadhaar and 9% chose not to express their opinion. A total of 10,729 citizens voted on this poll.

Some citizens outlined that vendors who make Aadhaar card have been selling information in the market. When LocalCircles spoke to some of the vendors, they outlined various concerns including the costs that they incur to become a licensed Aadhaar operator, the high upfront equipment cost and the fact that the UIDAI payment of INR 100 per Aadhaar is usually quite delayed. Therefore it is not lucrative for them to be an operator unless they charge extra from citizens for making Aadhar or find other ways to earn.

LocalCircles also asked the same citizens if they supported Government’s decision to make Aadhaar mandatory for filing tax returns and linking it to PAN card. Approximately 70% citizens support this move of the Government of linking Aadhaar and PAN while 27% oppose such a linkage and Aadhar being mandatory to file tax returns. 3% citizens did not have an opinion. A total of 9,847 citizens voted on this poll.

Citizens have also suggested that UIDAI must think through all the loop holes that currently exist in regards to Aadhar information usage, access, sharing, retention, etc and find solutions to address them. Also, many concurred that any individual involved in making Aadhar, if found guilty of compromising information must face severe penalties, including jail term.