April 22nd, 2022, New Delhi: There has been a significant rise in consumption of junk foods— especially, packaged and processed food—among Indians over the last 2 decades. This has lead to an adverse effect on public health as most of these foods contain high amount of sugar or salt and bad fat ingredients, which result in increased in non-communicable disease (NCDs) like obesity as well as rise in conditions, such as diabetes and heart disease. It is estimated that nearly 5.8 million people in India die from NCDs every year out of total deaths of about 9 million. Supermarkets in India as well as ecommerce platforms are selling hundreds of varieties of packaged food products. A pack of fruit juice, per se, typically has up to 37 teaspoons of more sugar in a litre than even carbonated drinks, according to a study. The World Obesity Federation predicts that over 27 million children in India may suffer with obesity by 2030. One of the solutions to address this fast growing problem is introduction of regulations that will help consumers make informed choice when they are planning to consume processed foods. The ability to distinguish between packaged and processed foods and the one that contain a high amount of salt, sugar, fat (HFSS) content.

The Food Safety and Standards Authority of India (FSSAI) has proposed a plan to introduce Health Star Rating (HSR) for packaged food products. The HSR rates foods on a five-star scale are based on factors such as energy, saturated fat, sodium, total sugar, and healthier aspects such as protein, natural ingredients, etc. The regulator has decided to go ahead with a new star rating system for packaged foods and beverages, despite criticism from consumer activist groups and food experts. Consumer activist groups have written to the Ministry of Health and Family Welfare warning that such a system can be easily manipulated by the industry, compromising public health. They point out that though the ‘nutrition information’ provides some idea about the product, but it does not help consumers in making a healthy choice. When Australia adopted the HSR system in 2014, things haven’t quite gone to plan as manufacturers had to only add a few healthy ingredients to get a good star rating on unhealthy foods, they say. Food experts have instead called for the need to have direct warning labels on packs. They say that it is up to the Parliamentary Standing Committee on Health to take suo moto recognition of the issue and examine it in depth. Packaged and processed food companies, on the other hand, have been opposed to such a regulation.

Amidst all these developments, LocalCircles has conducted a national survey to gauge public pulse on whether the warning sign should be made mandatory on packaged food products which contain high sugar, high salt and high fat. The survey received more than 11,000 responses from consumers located in 382 districts of India. 61% of the respondents were men while 39% were women. 41% respondents were from metro/tier 1 districts, 33% were from tier 2 districts and 26% were from tier 3, 4 and rural districts.

7 in 10 Indians in favour of RED warning sign on high fat, sugar and salt foods

The question in the survey asked consumers, “How should packaged food products with high sugar, high salt and high fat be identified for consumers to make an informed decision when buying?” In response, 31% of consumers said “There should be a red warning sign on such packaged products”, 20% said “Every product should have a star rating based on contents”, 39% “There should be a red sign on such products and on other healthy products there should be green or orange sign”. There were only 8% of consumers saying that “None of the above is needed, packaged food products must continue to be sold without any warnings or signs” and 2% did not have an opinion. On an aggregate bassis, 7 in 10 Indians are in favour of RED warning signs on packaged foods that contain high fat, sugar and salt. This question received 11,439 responses. 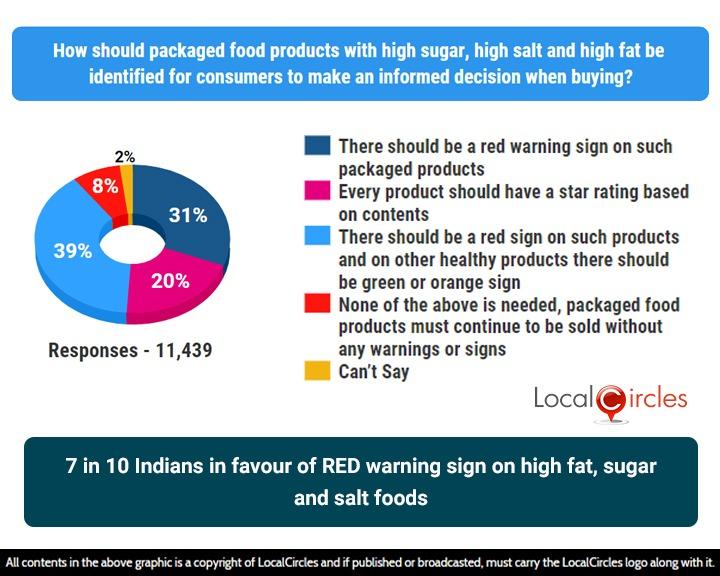 Many consumers believe that the young, under the age of 25 are the top consumers of packaged and processed foods and pointed, straight forward awareness about whether it is a RED, ORANGE or GREEN food will go a long way in they understanding what it means over time and making informed choices. While this may mean that some demand may move away from unhealthy, addictive foods, it will certainly rise for alternate and natural products. An example cited by couple of members was transition from refined sugar based packaged cakes to jaggery and or date and fig based cakes. Hence, the packaged food industry will likely see a transition but we will be a healthier society than what we are today, a few of the LocalCircles members expressed in the community discussions and concurred with.

The surevy also makes it clear that 7 in 10 Indians surveyed are in favour of RED warning sign on packaged foods that contain high fat, sugar and salt while 1 in 2 Indians surveyed support a star rating system proposed by FSSAI.

LocalCircles will escalate the findings of the surey to The Food Safety and Standard Authority of India (FSSAI), the Ministry of Health and Members of Parliament so India does packaged and processed food awareness right.

The survey received more than 11,000 responses from consumers located in 382 districts of India. 61% of the respondents were men while 39% were women. 41% respondents were from metro/tier 1 districts, 33% were from tier 2 districts and 26% were from tier 3, 4 and rural districts. The survey was conducted via LocalCircles platform and all participants were validated citizens who had to be registered with LocalCircles to participate in this survey.