February 24, 2020, New Delhi: The OTT industry in India is only about 5-years old, but subscribing to Over-the-Top video streaming platforms has become the new ‘in-thing’. Platforms like Netflix, Amazon Prime, Hotstar, etc. have given us access to high quality and engaging content, which we can watch at our own pace, sitting at a place of our choice. Shows like Mirzapur and Sacred Games have become topics of discussion at workplaces and social gatherings.

While these OTT platforms deliver content unlike the traditional mediums and have their advantages, the not-so-positive sides of these platforms are also being widely discussed. Adult content, foul language, anti-national ideology etc. are some areas where Indians do not agree with the online curated content. LocalCircles conducted a 5-poll survey to check the citizen perception of the OTT platforms available in India and what improvements they could make. The survey received more than 40,000 responses from across India.

When citizens were asked if they watch shows/movies using Netflix, Amazon Prime, Hotstar or any other OTT platform, 47% citizens replied in a positive while 51% replied in a negative. 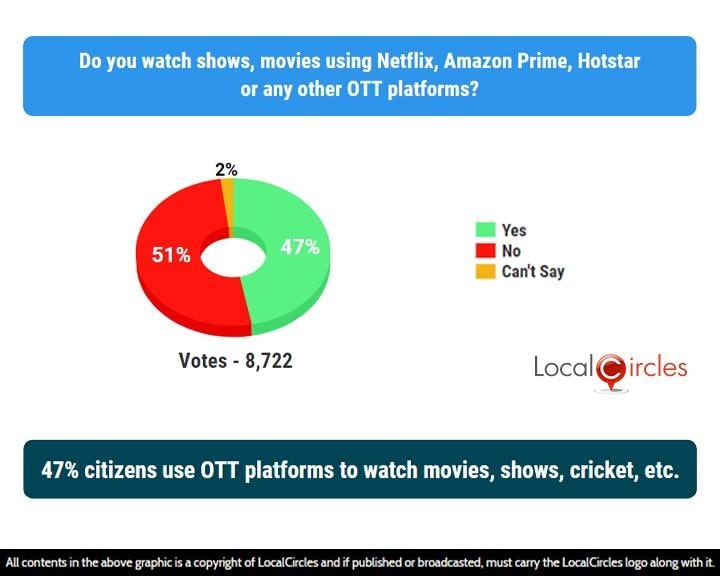 Indian audience has got hooked to shows like Game of Thrones, Suits, Mirzapur, Breaking Bad, The Family Man etc. and the content quality has been well appreciated.

Of those who subscribe to OTT platforms, 33% have 3 or more subscriptions 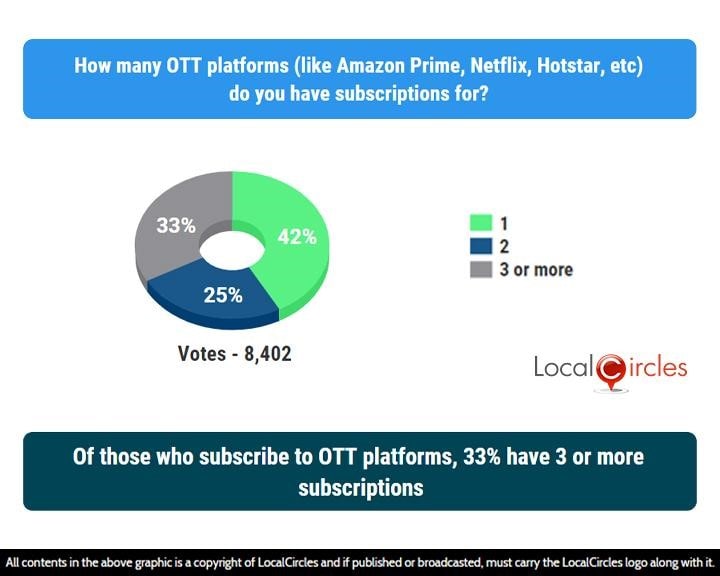 Indian telecom operators have been trying to cash in on this OTT craze by offering bundled subscription packs to woo the users. Airtel and Vodafone have been offering a 1-year free Netflix/Amazon Prime membership to their existing and new customers. 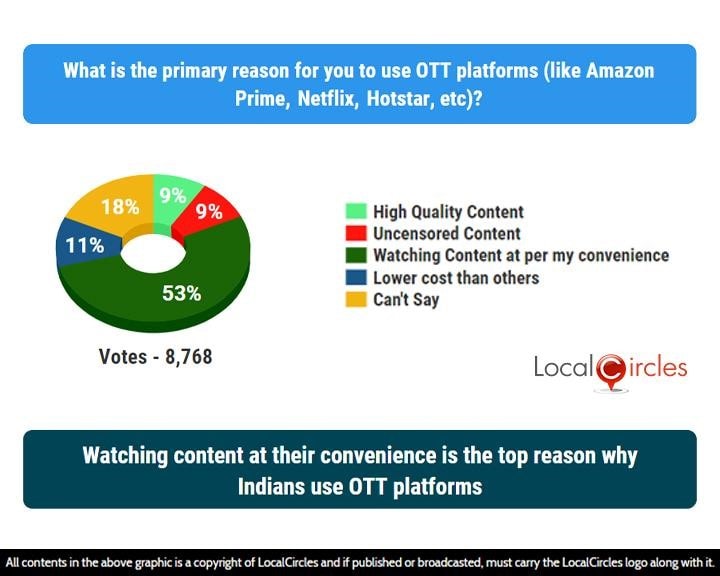 Earlier, TV shows and movies would air at a certain time and one would have to sit in front of the television to watch it, not to mention the ‘remote-wrestling’ that would happen among family members. With OTT platforms, people can now watch shows and movies on their mobile, tablet or laptop in the comfort of their own rooms, while sitting in their cars, or even while commuting in a metro.

25% respondents also said that the adult only content easily being accessible to children is their top concern with OTT platforms. 9% identified their top concern as obscene content, 13% said anti-national content, 8% said content that is insulting to certain religions and castes and 8% said the use of very strong language. 37% said they had no issues with these OTT platforms. 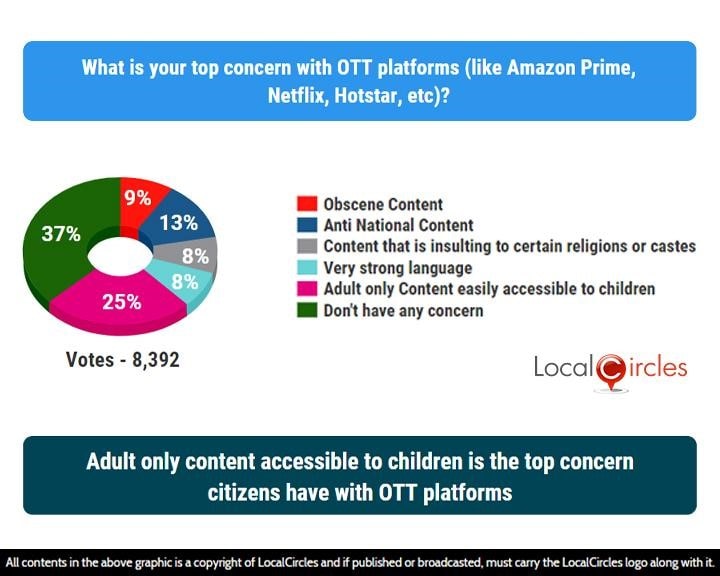 The final question asked citizens if the shows on OTT platforms like Netflix, Amazon Prime, Hotstar, Zee5 etc. in India should be subjected to some kind of censorship rules of Government code of conduct. 63% agreed with it while 32% disagreed. 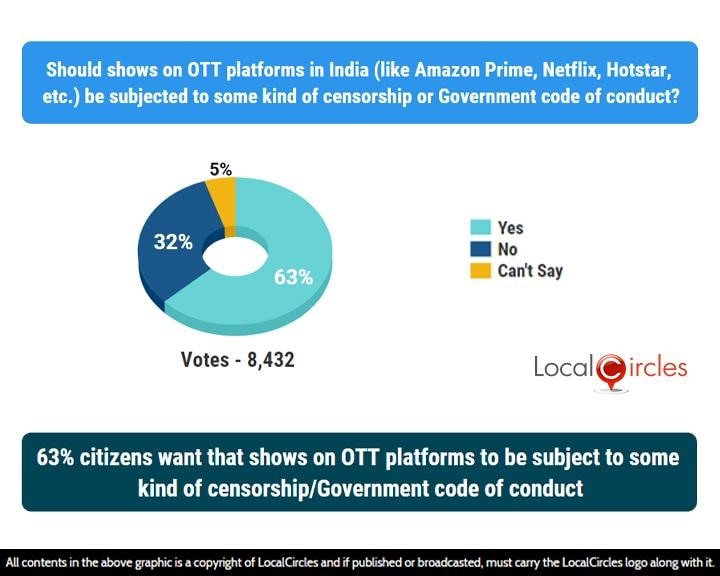 Citizens also said that if outright censorship was not possible, then the Government must design a ‘code of conduct’ for OTT platforms and every movie/TV show at the beginning should certify that the code of conduct has been strictly followed during the making. Also, according to people, there should be a way for a citizen to write to the Government and raise an “inappropriate content” complaint as well as sensitise the community.

The Internet and Mobile Association of India (IAMAI) has released its second online curated content provider code in which it has committed to setting up a body called the Digital Curated Content Complaints Council (DCCCC) which have not been resolved at the Digital Content Complaint Forum. Consumers however have expressed that they have limited confidence in industry bodies being able to serve as the regulator of inappropriate content. According to some citizens, that is precisely why a censor board exists in the country and the Indian film industry doesn’t regulate itself. As on date most of the OTT platforms like Hotstar, Netflix, Jio, Voot, SonyLIV haven’t signed this new code of IAMAI either.

The consumers clearly want the Government to come up with the Code of Conduct instead and some even want the Government to open an easy to access complaint filing channel as well as get all the associations to forward all complaints received mandatorily to Information and Broadcasting Ministry. LocalCircles will also be sharing the results of this survey with the senior officials of Ministry of Information & Broadcasting and write to them to give due consideration to the public asks. 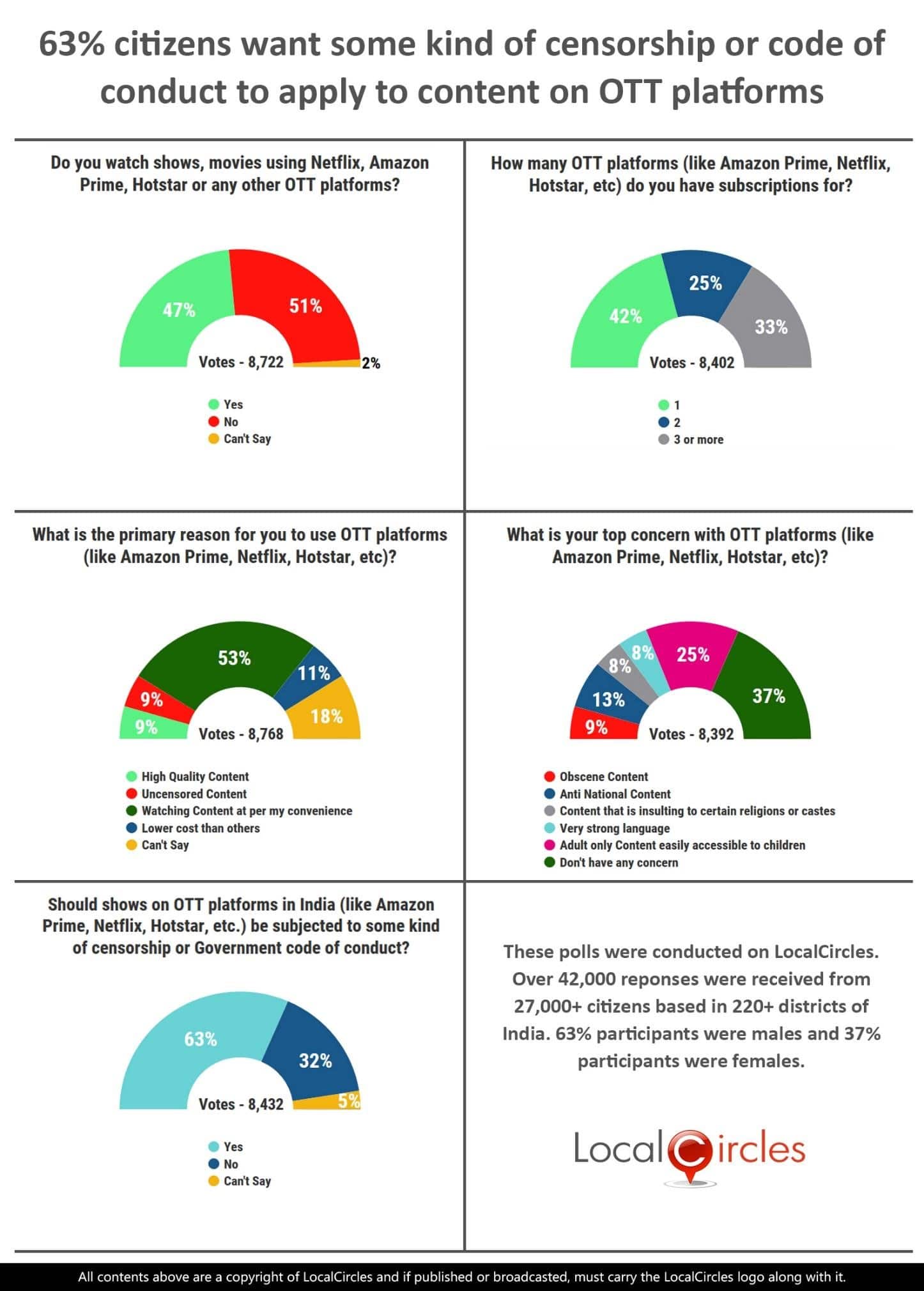