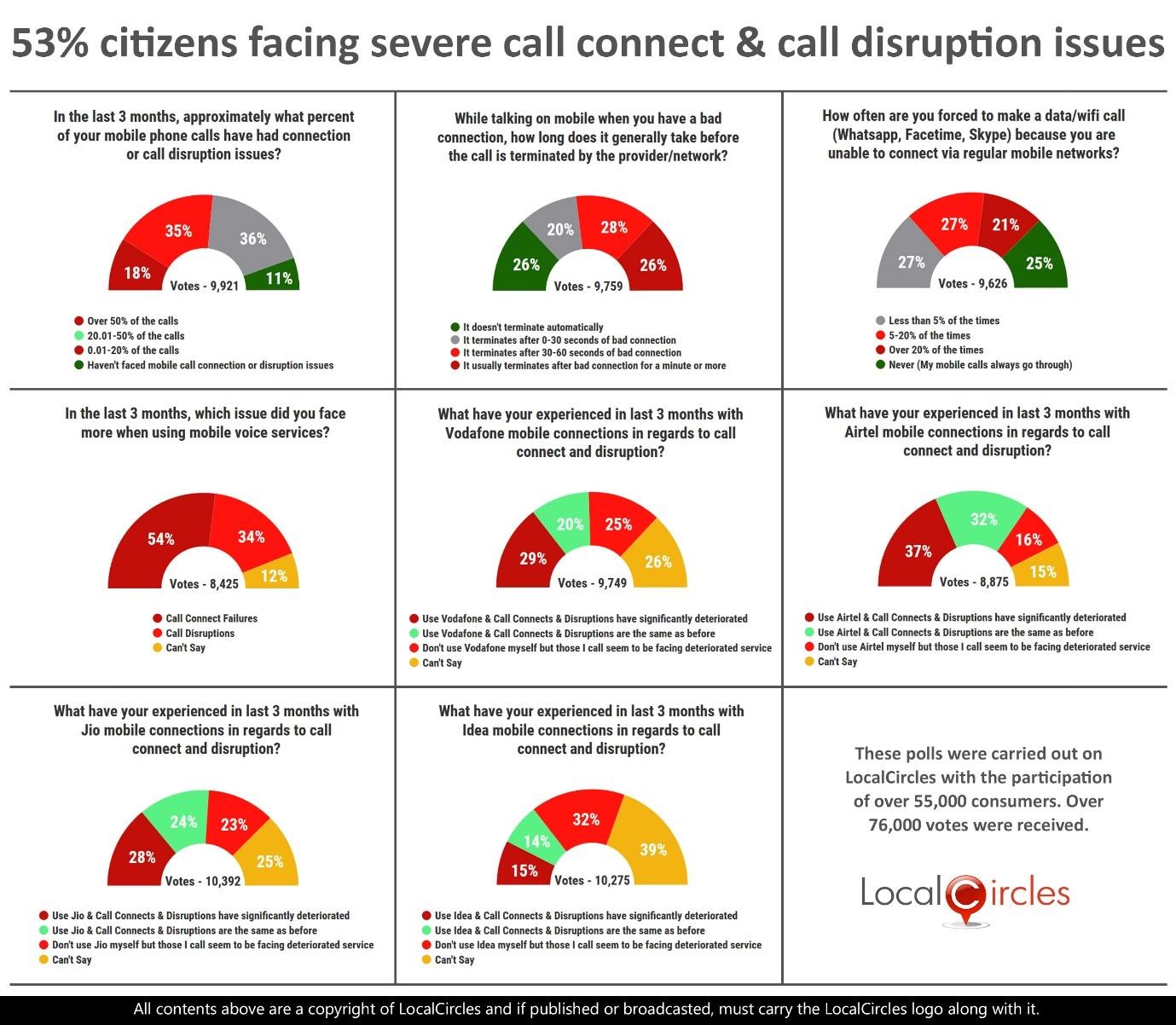 29th August 2019, New Delhi: Trying to call a client for an important issue or trying to give that breaking news to a family member but not able to reach them? You are not alone. Majority of the citizens have been facing severe call connect and call disruption issue with their mobile service providers. The latest data released by TRAI also shows that users are switching networks at a rapid pace to find a solution to the problem of bad connections. After numerous instances were reported by the consumers of calls not connecting and many calls getting disrupted in the middle of the conversation, LocalCircles conducted a large survey to check how the consumer experience has been with their telecom service providers in the last 3 months. The survey received more than 76,000 votes from 55,000+ unique consumers from across the country.

Similar polls were conducted in May of 2018 and November of 2018 to check citizen pulse on this issue and the situation does not seem to be getting any better for the consumers. 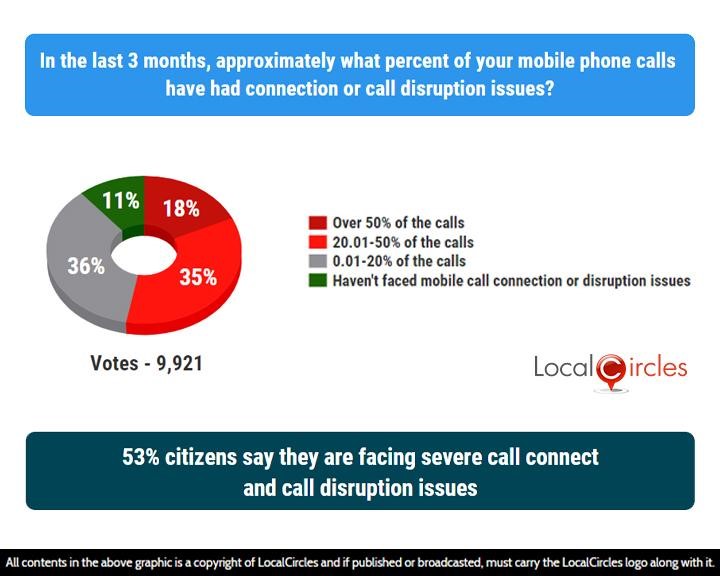 Network issue is not something that has come up overnight. The problem has been bothering users for many years now and the situation only seems to be sliding further. As per reports, many telecom service providers were recently fined for non-compliance with the benchmarks for various quality of service parameters set by the Telecom Regulatory Authority of India, including call disruption and call connect issues. These penalties were imposed based on the rule implemented by TRAI with effect from October 1, 2017 to improve the telecom service quality in the country. 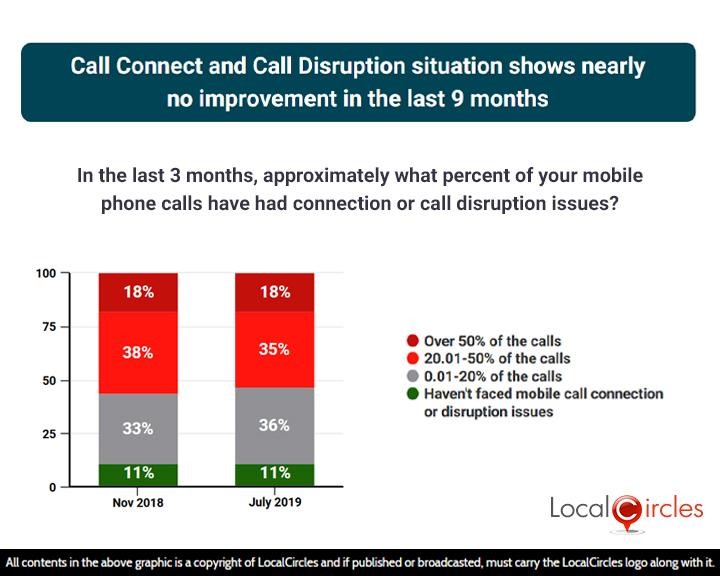 The call connect & call disruption situation has shown no improvement in the last 9 months. 89% consumers in the current poll have said that they face call connect & disruption issues with their service providers, which is the same as what came out in the survey conducted 9 months ago in November 2018. 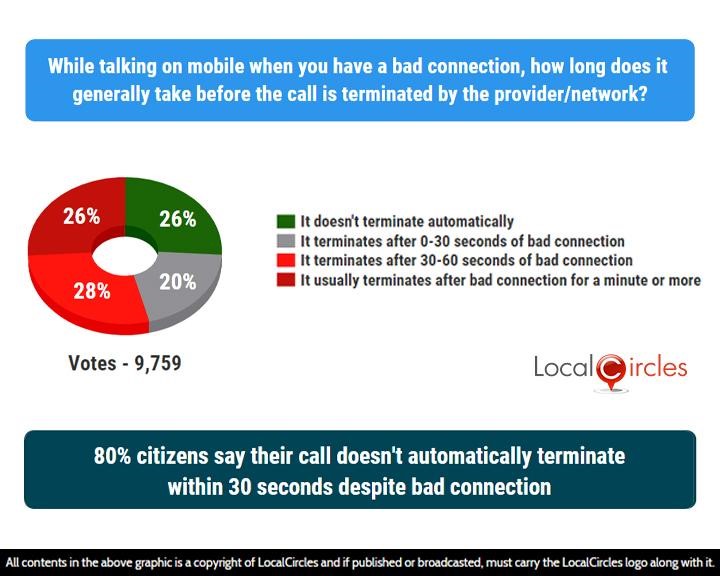 26% said that the call does not disconnect automatically when they have a bad connection while 20% said it takes up to 30 seconds for the call to get disconnected. 28% said it takes between 30-60 seconds and 26% said it usually terminates after a minute or more.

Minister of State for Electronics and IT, Sanjay Dhotre during a meeting with telecom companies recently advised the companies to set up more towers to improve their quality of service and to provide better network to customers.

Despite call quality becoming bad, most calls don’t terminate automatically even after a minute has passed 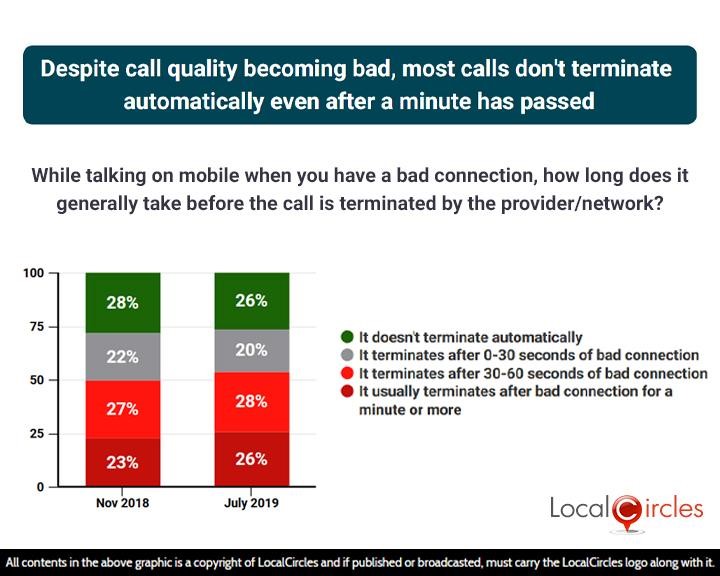 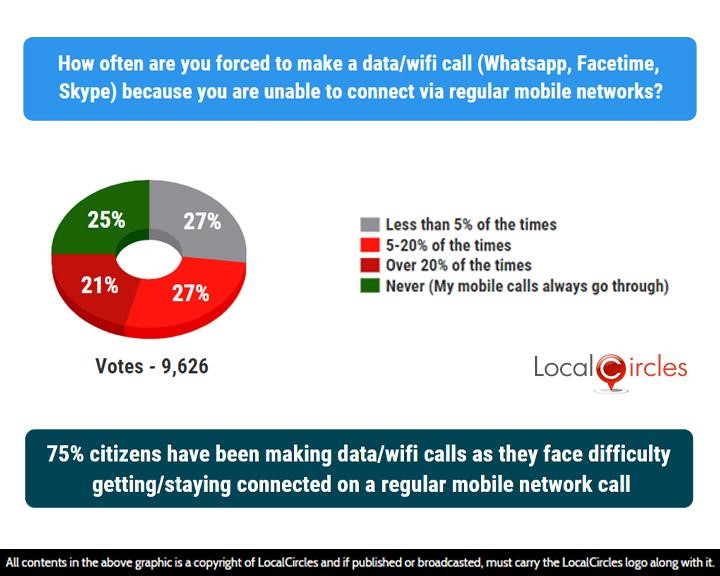 Given nearly no improvement in mobile connectivity quality, citizens continue to rely on data/wifi calls 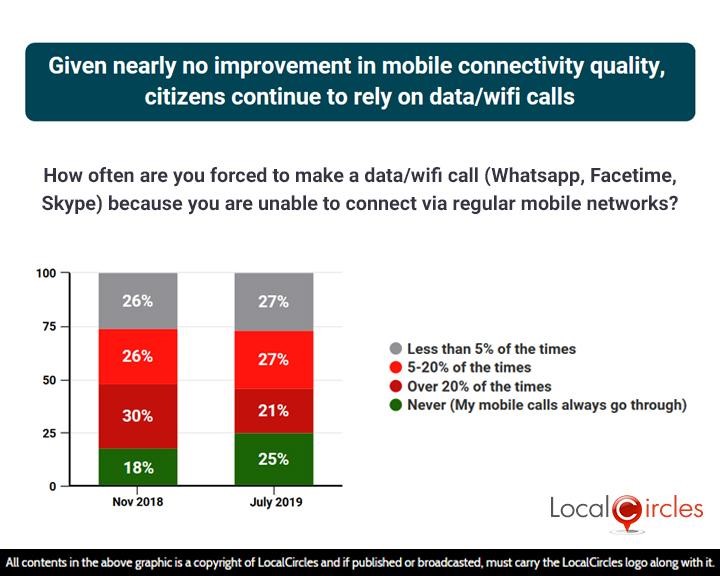 The comparison with 2018 also shows that there is nearly no improvement in mobile connectivity quality as citizens continue to rely on data and wifi calls. In last year’s survey, only 18% consumers had said that their mobile calls always go through and they never need to make a data call. This number has slightly increased to 25% this year.

Telecom Minister Ravi Shankar Prasad said in the Rajya Sabha that the Department of Telecommunication and TRAI had received a total of 729 complaints about call disruptions till June 25 this year. But hearing what consumers have to say, the situation looks much, much worse. 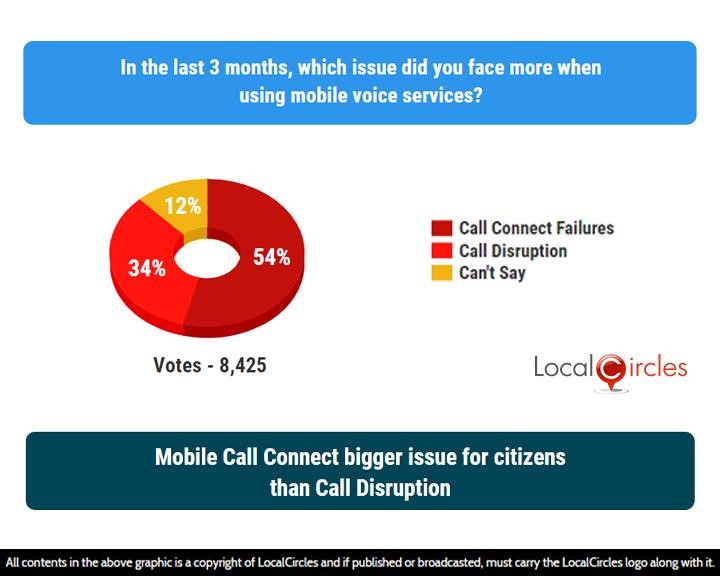 In the following poll, 54% citizens said that call connect failures was the biggest mobile voice service issue they faced in the last 3 months. 34% said call disruptions was a big issue and 12% were unsure. 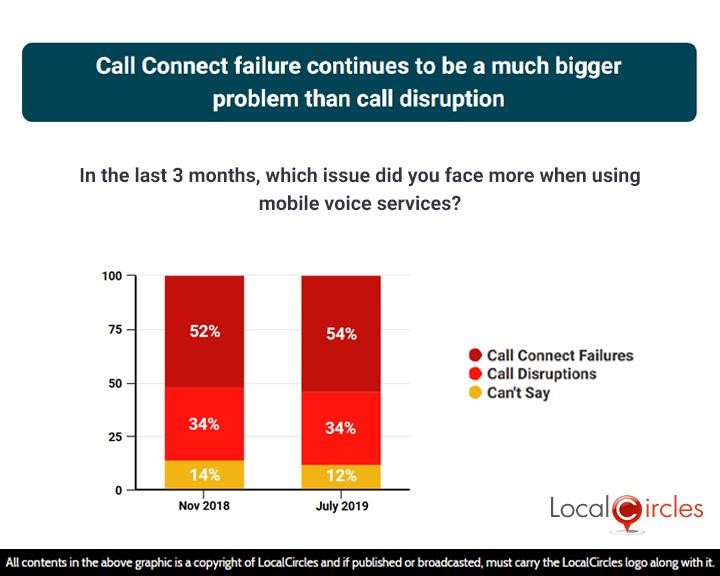 Call connect failure continues to be a much bigger problem that call disruptions. 54% consumers in this year’s said they face major call connect failures which is a slight increase from 52% who felt the same in 2018. 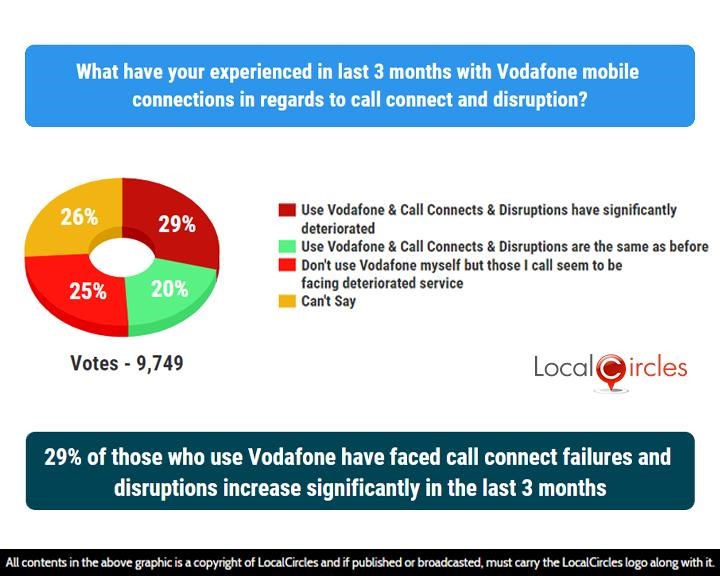 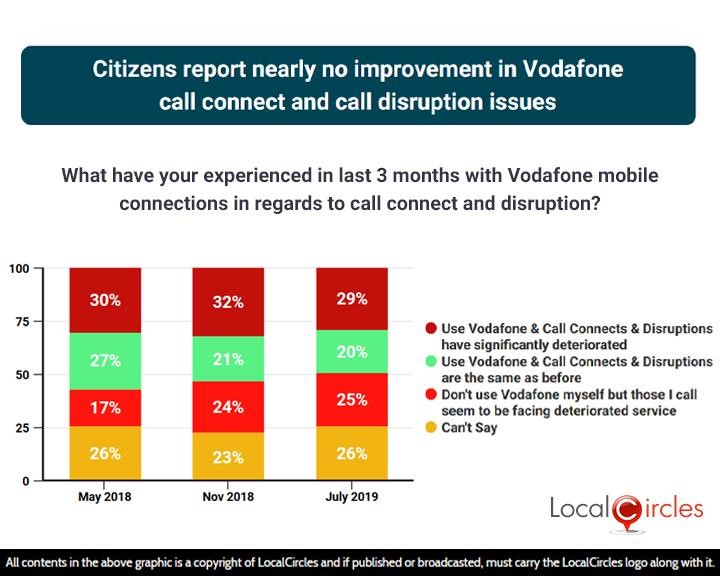 Vodafone users report that there has been nearly no improvement in Vodafone call connect and disruption issue. 30% respondents in May 2018 had said that the call connect & disruption situation on the Vodafone network had significantly deteriorated. This number increased to 32% in November 2018 survey, but has come down slightly to 29% currently.

The latest TRAI subscribers report shows a steep decline in the Vodafone-Idea userbase with the company loosing over 41 lakh subscribers in just the month of June 2019 pointing to the fact that consumers have been quite unhappy with their services. However, Vodafone-Idea still remain the market leader in terms of the total userbase in the country. 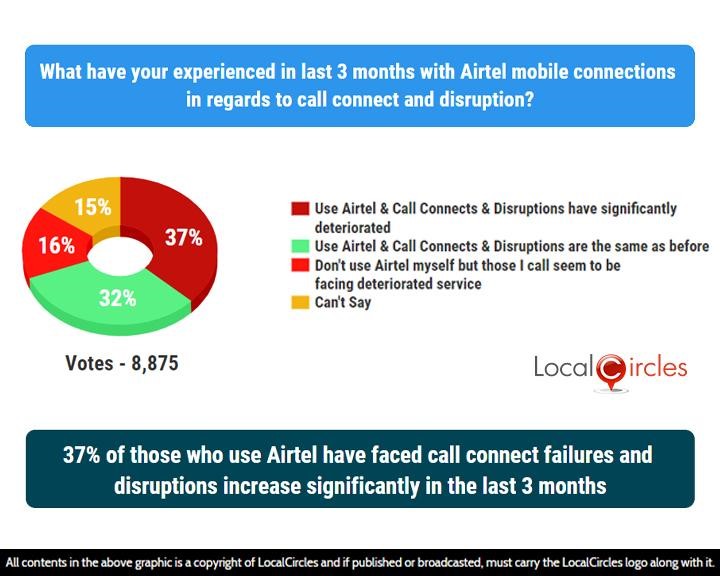 With Airtel, 32% said call connect & disruption issues are same as before while 37% said they have significantly deteriorated. 16% said they don’t use Airtel but those they call have been facing deteriorated services. 15% were unsure.

Airtel recently reported a huge loss of Rs. 2866 crores in Q1 of this year. Following that, Airtel also announced that it will be shutting down its 3G network across India by March 2020, which would enable them to focus on providing improved 4G services to its users. 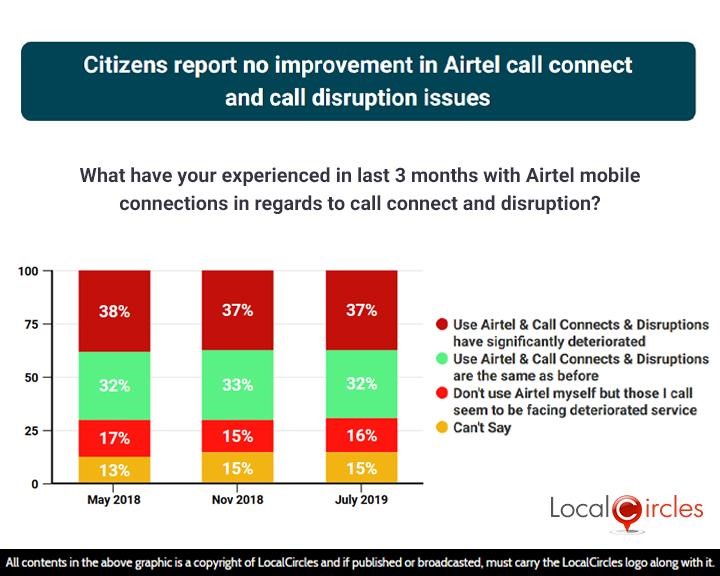 Situation is same with Airtel as well. 38% respondents in May 2018 had said that the call connect & disruption situation on the Airtel network had significantly deteriorated. This number stood at 37% in November 2018 survey, and continues to stay at 37% currently too.

As per the TRAI subscribers report, Airtel has been able to reduce the fall in their subscriber base but still lost close to 30,000 users in June this year. 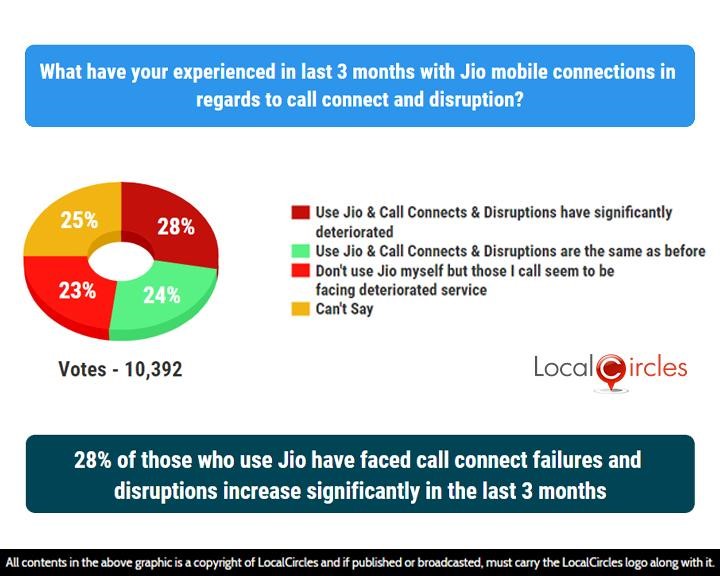 In case of Jio, 24% said issue with call connects & call disruptions are same as before while 28% said these issues have significantly deteriorated. 23% said the other Jio users they call seem to be facing deteriorated services.

Recently, Jio overtook Airtel to become India’s second largest operator in terms of mobile phone subscribers. Although their numbers are constantly increasing, consumers are still not happy with the voice services provided by them. 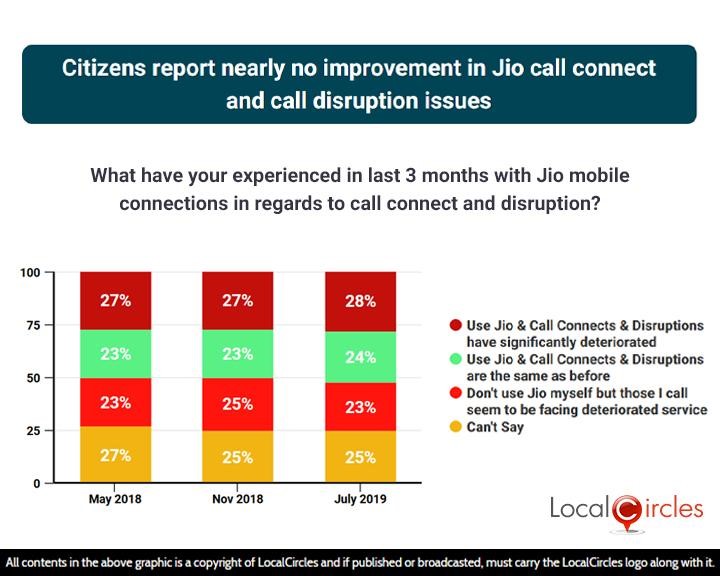 The story is no different with Reliance Jio. The percentage of users who feel the situation with call connect & disruptions has deteriorated stands at 28% currently, while it stood at 27% both in November and May 2018.

Jio has been increasing its subscriber base at a rapid pace. The data released by TRAI shows that Reliance Jio which is the largest telecom player in the market by revenue, added more than 8 lakh users in June 2019 to its subscriber base. 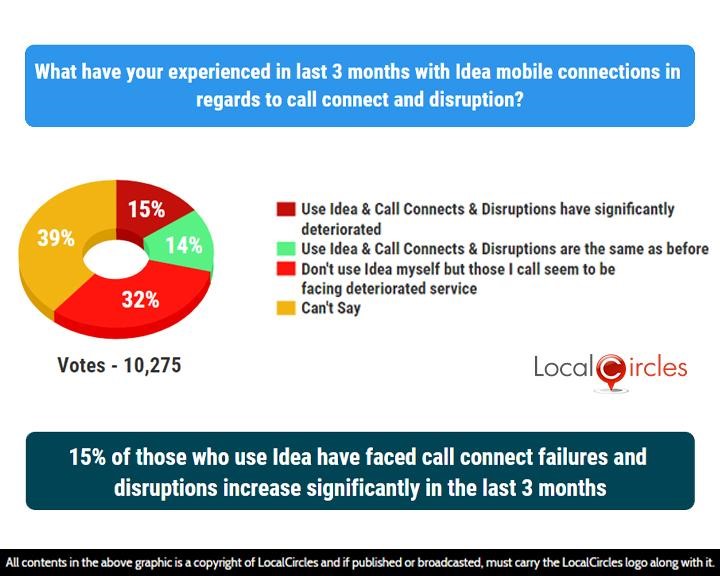 When the same question was asked to Idea users, 14% said the call connect & disruptions are same as before, whereas 15% said the problems have significantly deteriorated. 32% said they don’t use Idea themselves but the ones they call have been using deteriorated services. 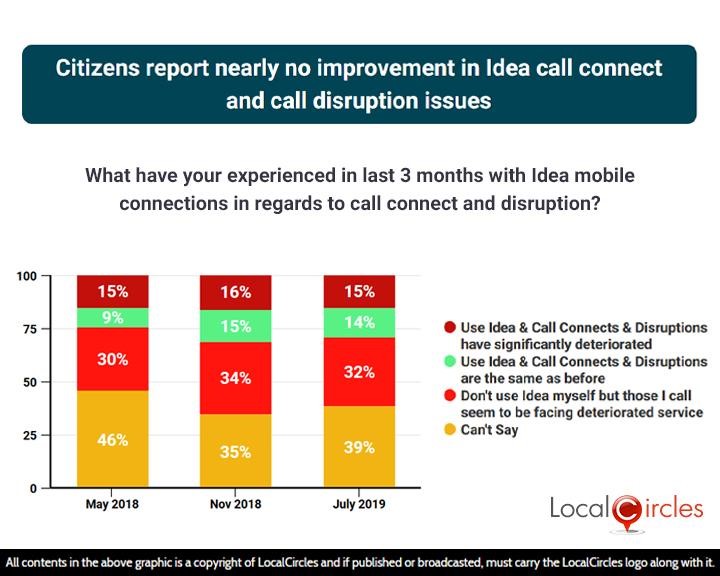 Idea shows the same trend. From 15% in May 2018 and 16% in November 2018, the number of people saying call connect/disruption situation has deteriorated stands at 16% in July 2019. Majority of the consumers who were Idea users were located in tier 2 and tier 3 cities.

If people who are not the direct users of a particular mobile service provider are excluded in the final results, i.e. the option “Don’t use Vodafone/Idea/Airtel/Jio myself but those I call seem to be facing deteriorated services” is removed, then the survey results would be as follows:

Telecom service providers in the country have been trying to woo consumers by offering them freebies like insurance, free access to online video streaming services etc. but it looks like consumers want them to focus on the main area first, which is providing an uninterrupted calling experience and ensure that the increasing numbers of call connect and call disruption issues are minimised.

All data in the above survey is based on the experience of consumers with mobile services and specific service providers in India and the results are indicative in nature. The results may differ from the results of any data-based studies conducted by TRAI, independent agencies or the individual operators.