December 6, 2021, New Delhi: Earlier this week, the Ministry of Health and Family Welfare announced that 2 cases of the Omicron variant were found in Bangalore. Also, COVID positive samples of many travellers coming to India are being genome tested across labs to detect the Omicron variant. The variant, which has scientists and epidemiologists from around the world raise red flags, has been categorised as a “variant of concern” by the World Health Organisation after it was identified in 3 countries. Within a week, Omicron has been detected in over 50 countries with all major countries included. In India, the cases of Omicron have been linked to international travelers, primarily coming from South African countries, whereas, 1 case in Bangalore is linked to a healthcare worker with no travel history. The latest data suggests that the Omicron variant has between 30-50 mutations and a 5X transmission advantage over the base or alpha variant of SARS-CoV-2. More data is awaited on the severity of illness caused by Omicron, along with the efficacy of existing vaccines against this variant.

People across India have been raising concerns on LocalCircles regarding the urgent need for travel restrictions, filling the gaps that exist in the quarantine process, and overall, taking proactive steps to avert the repeat of March 2020 and March 2021 in the form of a 3rd wave. In late November, citizens via LocalCircles had urged the Government to reconsider the resumption of international flights from December 15th, and the same was accepted with the Government announcing on December 1st that the resumption has been put on hold.

The Government has identified 14 countries as “at-risk” countries, including South Africa, Botswana, Zimbabwe as well as European countries like the UK and Singapore. Travellers coming from these countries will have to undergo mandatory testing at arrival. The samples of those testing COVID positive is being further sent for genome testing of Omicron, and those with the negative RT-PCR report will have to isolate themselves for mandatory 7-day home quarantine. 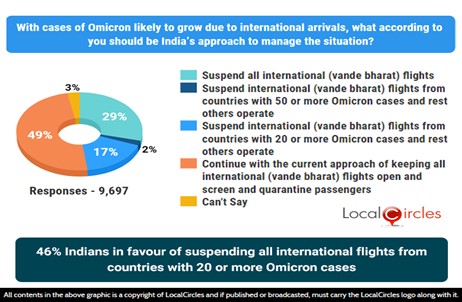 Citizens via the LocalCircles platform have also raised concerns over home quarantine. Reports from several states have come where travellers have either become non-traceable after exiting from the airport or deliberately given the wrong contact information about themselves. The risk is, if these travellers start going out, meeting others, visiting tourist destinations, they are likely to infect many more people who come in contact with them.

The next question in the survey asked citizens if it should be made mandatory for district health officials to do inspection/ location tracking for anyone undergoing home quarantine. In response, only 16% of citizens said it was not required. 84% said it should be made mandatory indicating that the majority of citizens want district officials to regularly inspect or location track individuals coming on international flights and under home quarantine to minimise the risk of Omicron variant. This question in the survey received 8,590 responses. 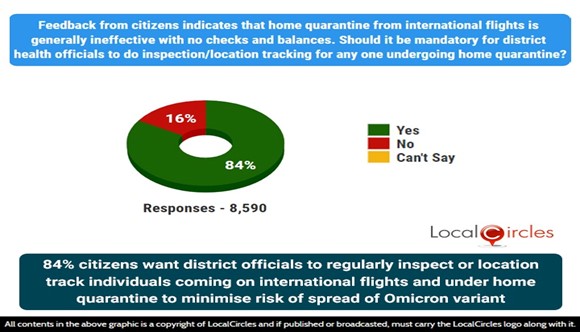 Some citizens on LocalCircles suggested that travellers must validate their contact number or email at airports, and if the same does not happen, they should be put in mandatory institutional quarantine, atleast the ones coming from “at risk” countries. With Wi-Fi zones available at most international airports, this is feasible now. People also suggested that location tracking of the travellers must be done via Whatsapp or Arogya Setu apps, or some other mechanism such that they maintain the home quarantine discipline.

Overall, the survey indicates that in light of the risk of Omicron, almost 1 in 2 Indians is in favour of suspending all international flights from countries with 20 or more Omicron cases. This will prevent individuals with high Omicron spread to not enter India till the situation improves. On other international travellers coming into India, people want the Government to streamline the home quarantine process by effectively tracking and tracing these individuals such that the risk of Omicron spread through them is reduced. Also, the information transfer from airport authorities to the district administration must be done in real-time. According to people, timely action on these two recommendations can help in isolating Omicron cases and slow the spread and possibly avert a 3rd wave which according to most citizens is something India cannot afford at this point. LocalCircles will be sharing the findings of the survey with all key stakeholders in Central and State Governments so that citizens’ feedback can be taken into account as decisions regarding flight restrictions, screening and quarantine are taken.