February 2, 2022, New Delhi: In light of the new COVID variant Omicron leading a surge in daily cases, the Government of Delhi in late December imposed a series of restrictions, including the shutdown of in-person schools, to curb the spread within the city. According to the Delhi State Health Bulletin, the test positivity rate (TPR) in the state has shown a gradual decline to 5%, which had peaked on January 14th at 30.64%. Though testing has declined considerably, the feedback from citizens on LocalCircles also indicates that there is a decline in cases. Delhi reported on Tuesday 2,683 cases out of 52,736 tests conducted across the city, with 27 related deaths.

However, schools continue to get impacted with the Delhi Government maintaining that as TPR is gradually declining it has become imperative to reopen schools in the state to bridge the learning gap of students and to ensure their social, emotional and mental well-being. In states like Karnataka, Tamil Nadu, Madhya Pradesh and Uttarakhand, schools reopened from January 31st, while classes continue in the online mode in many other states. A body representing over 120 private schools in Delhi recently urged Delhi lieutenant governor Anil Baijal to immediately reopen schools.

Meanwhile, the country has witnessed a decline in daily COVID cases, coupled with a decline in Test Positivity Rates weeks after a surge that recorded nearly 350,000 daily cases. Medical experts are stating that most major cities have already witnessed the peak of the 3rd wave, and the numbers are declining. Further, the latest genome sequencing data shows that BA.2, the new sub-variant which is causing an extended Omicron surge in some other countries, is already prevalent in India reducing the likelihood of the 3rd wave getting prolonged. However, the risk of reinfection remains and it is critical for people to follow the COVID protocols.

As parents have been expressing their opinions on LocalCircles about re-opening of in-person schools, LocalCircles conducted a survey on what should be the criteria to reopen schools in the capital. The survey received 9,758 responses from residents across all districts of Delhi. 64% of the respondents were men while 36% were women. 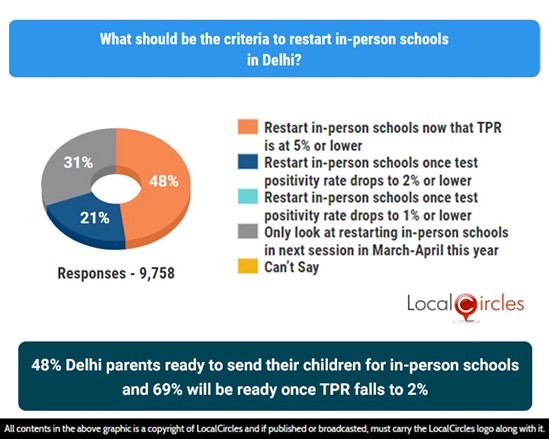 As the situation in Delhi stands right now with TPR in the 5% range, 48% of Delhi parents are likely to send children for in-person schools while 69% will be ready to send them once TPR falls below 2%.

Basis inputs from scientists, epidemiologists, virologists and paediatricians, data from the risk of re-infection by BA.2 sub-variant post BA.1 infection and transmissible nature of Omicron and survey findings, a conservative approach is warranted in regard to reopening of schools at this time. It is suggested that schools be reopened once TPR reaches 2% which basis the current decline rates is likely to happen by Feb 10th. However, if there are critical reasons like exams, attendance of senior classes, etc. schools may be opened on selective basis now since the TPR is nearly 5%. However, in both these circumstances, school administrations and district magistrates must keep a close watch on any rise in new cases or cases of re-infection, for what is being observed in some countries with children and Omicron variants is a cause of concern.

LocalCircles will be sharing the findings of this survey with the Lieutenant Governor, Chief Minister and Chief Secretary of Delhi so inputs of Delhi parents can be considered as the final decision to re-open schools is made.

9,758 responses from residents across all districts of Delhi. 64% of the respondents were men while 36% were women. The survey was conducted via LocalCircles platform and all participants are validated citizens who had to be registered with LocalCircles to participate in this survey.