Citizens feel administration executed well, but majority do not want the rule regularized

People are using taxi/public transportation services or if available, their second car

87% believe auto/taxis services overcharged them during the period 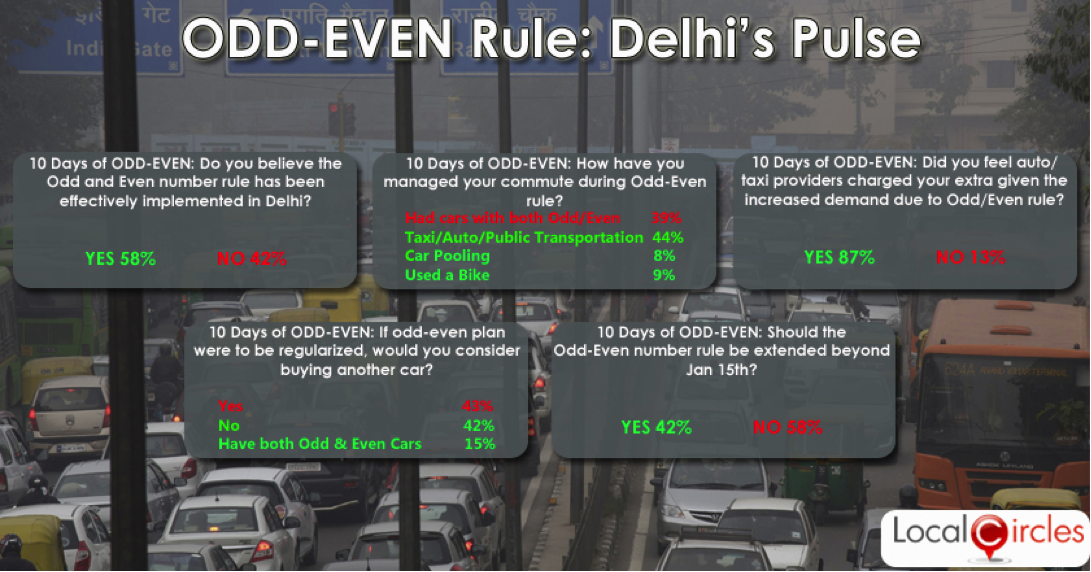 New Delhi, India, January 14, 2015 – LocalCircles (www.localcircles.com), India’s leading citizen engagement platform today announced results of the Odd-Even citizen survey to gauge the success of the rule and get citizens insights that can be used by Delhi Government for potential next steps.

This exercise was conducted via a set of poll and free form discussion amongst over 100,000 citizens of Delhi. Citizens have credited the Delhi Government and Police for exceeding expectations on the implementation front with 58% Citizens outlining that the Odd-Even rule has been implemented effectively. In a late December poll, only 31% thought that the rule could be implemented effectively. Also, while citizen responses suggest that only limited impact on the pollution front has been visible so far, citizens are happy with the reduced traffic on the roads of Delhi.

During the first 10 days, a large majority of people indicated that either they used public transportation i.e. metro, bus, autos and taxis or used their second car. Only 8% used car pooling while 9% used a bike instead.

87% of the people who participated in one of the poll questions suggested that during this period the auto/taxi services overcharged them while 13% of them found no difference in fares.

On a question about regularizing the rule post Jan 15th, 2016 and how they plan to manage their commutation, approximately 42% citizens who polled plan to buy a second car while 15% already have a second car that they plan to use.

On the last and final question about whether the rule should be extended beyond Jan 15th, 2016, 42% people are in support of an extension while 58% citizens do not support the continuation of the rule.

Based on poll results, it can be interpreted that while Citizens believe that the Government surpassed their expectations on the implementation front, the clear impact on reduction in pollution is yet to be determined. Citizens, in general are happy with the reduction in traffic, however they are facing inconveniences and 42% of them have highlighted considering buying a second car if the Odd-Even rule were to be regularized. Also, the Government of Delhi must look at how to put in safeguards and controls so auto/taxi services aren’t overcharging citizens in case the rule was to be implemented again or regularized. Below are the detailed poll results:


Poll # 1: Do you believe the Odd and Even number rule has been effectively implemented ?

Poll # 2: How have you managed your commute during the Odd-Even rule?

Poll # 3: Do you feel auto/taxi providers charged you extra during the Odd-Even rule?

Poll # 4: If odd-even plan were to be regularized, would you consider buying another car?

Poll # 5: Should the Odd-Even rule be extended beyond Jan 15th?