Aug 12, 2022, New Delhi: Last week, a self-proclaimed politician in Noida after being questioned by a lady fellow resident for his encroachment, misbehaved, abused and physically assaulted her. The matter escalated rather quickly as the video of the episode went viral drawing reactions from citizens across Noida finally becoming national news. The self-proclaimed politician ended up fleeing only to be arrested by police a few days later in Meerut. Meanwhile the illegal encroachment done by him was demolished by the Noida Authority. The fellow residents of the society celebrated.

While the physical assault and abuse is unacceptable in the strongest terms and something that he must be booked and punished for, the big question in everyone’s mind is, how common are these encroachments in societies and colonies in Noida. Was this a case in isolation that a local politician was leveraging his connections and encroaching on common area and public space or is encroachment a much more common phenomenon these days. To understand the same, LocalCircles conducted a local survey which received inputs from over 2,000 residents of Noida. 43% of the respondents in the survey revealed that “many residents have done encroachment of common areas/spaces in their society/colony” while 29% stated that only a few people in their society/colony were guilty of such action. In some societies/colonies such transgression was limited to just a few flat or homeowners, according to 14% of the respondents, while another 14% denied such illegal action by residents in their society/colony. 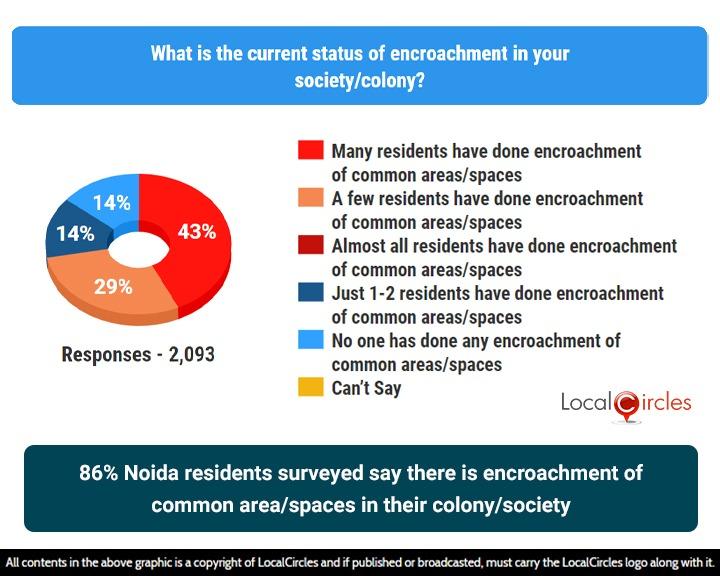 Illegal extensions and additions to houses and apartments or encroachment of common areas/public spaces, are not just restricted to slum/ lower income colonies or semi urban areas but is a reality even in upper middle class and affluent neighborhoods and societies. The self-proclaimed politician was a resident of the posh society called Grand Omaxe in Sector 93 of Noida.

LocalCircles also received inputs from citizens on the way forward. There is some consensus on the idea of Noida Authority mandating disclosure by all Apartment Owner Association and Resident Welfare Association of all encroachments of public spaces in their society/colony. People believe that if the AOA/RWA signatories have to sign on such a disclosure, they will automatically thoroughly evaluate their societies/colonies for encroachment. After due notifications to the residents, Noida Authority could take actions like was done in the case of this politician. However, some citizens felt that there is lack of intent to address encroachments both by the authority and RWAs/AOAs because many of the officer bearers are also guilty.

“With this latest episode, there is an opportunity for Noida Authority to drive systemic change by issuing disclosure guidelines for AOAs and RWAs and address the issue of encroachment”, said Sachin Taparia, Founder, LocalCircles, “If the model works in Noida, it could work in other cities of Uttar Pradesh too”, continued Taparia.

LocalCircles, as always will escalate the findings of this local survey to Noida Authority and senior leadership in the State Government so actions can be taken to minimize such encroachments