August 30, 2020, New Delhi: India is known around the world for the focus it puts on academic excellence and many Indians can now be seen leading some of the world’s most powerful organisations. JEE and NEET are two of the most important and sought-after exams conducted for undergraduate programs in the country. Due to the ongoing COVID-19 pandemic, schools and colleges in the country have been closed for over 5 months now. Many assessments and exams have also been cancelled, but the Ministry of Education after postponing the JEE and NEET exams twice in April and July have scheduled the exams to be held in September this year.

There has been both support and opposition of this decision by the Central Government. While on one hand over 17 lakh admit cards of NEET and JEE have already been downloaded by the students, on the other hand, some political parties, activists and students have been demanding the need for postponing the exams again citing risk of COVID-19 and logistical challenges for students trying to reach examination centers from tier 4 towns and rural areas given lockdowns and limited public transportation. On Friday, a petition was filed in the Supreme Court on behalf of 6 State Ministers seeking postponement of the exams.

To get collective citizen pulse on the issue, LocalCircles conducted a survey among parents and students to check if conducting the JEE and NEET exams in September 2020 is the right decision. The survey received over 10,600 responses from across the country from participants located in 244 districts. 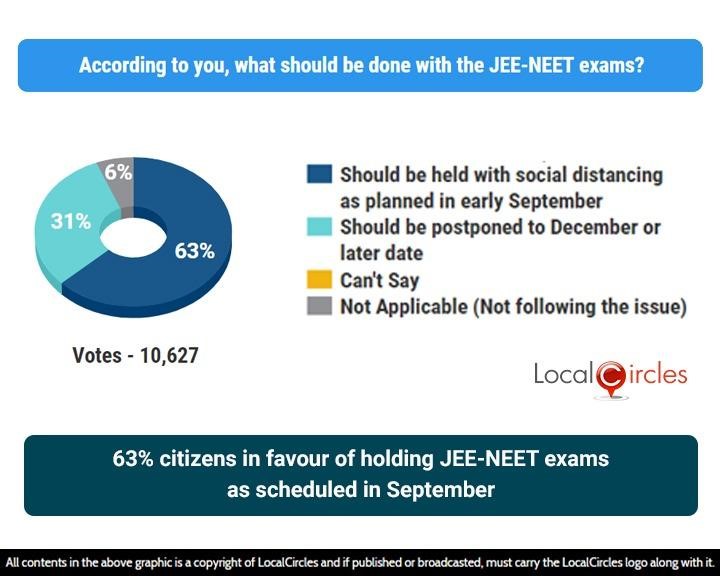 If the JEE-NEET exams are postponed any further, students will lose a year per Education Ministry as exams will not be possible in October and November due to festival time and will have to be pushed out to December. On the other hand, if they are conducted, there is the risk of the virus spreading and students in remote parts may have logistical challenges in getting to examination centers. Citizens were asked according to them, what should be done with the JEE-NEET exams in this situation. In response, 63% respondents said that the exams should be held in September as planned, with social distancing protocols, while 31% said they should be postponed to December or a later date. 6% did not share their opinion.

Union Education Minister Ramesh Pokhriyal recently said that the National Testing Agency has created standard operating procedures after consulting medical experts and will take all necessary steps for the safety of the students. Around 10 lakh masks, 10 lakh pairs of gloves, 6600 litres of hand sanitizer and disinfectant liquid has been arranged for the examination by the NTA for the JEE exam scheduled to be conducted from Sep 1-6, and the examination centers have been increased from 570 to 660. Various other safety measures have also been put in place like staggered entry of students, thorough sanitization of the exam centers between slots, touch free entry & document verification, monitoring of body temperature etc., have also been taken by the Government.

Keeping all this in mind, it looks like majority of the parents and students are in the favour of JEE and NEET exams being conducted in the month of September as per schedule, so that they do not lose on a very important academic year.

LocalCircles will be sharing the findings of this survey with the relevant stakeholders in the Central Government so the collective opinion is given the due weightage.