August 2, 2021, New Delhi: The Indian cinema hall and multiplex industry has opened in most states and UTs from July 30th with decline in cases over the last two months. Delhi-NCR, Uttar Pradesh, Rajasthan, Gujarat, Telangana, Karnataka, Chhattisgarh, Andhra Pradesh and Madhya Pradesh are some of the states which have allowed cinema halls to open in line with safety protocols and strong focus on vaccination of the staff. Most of these states have given permission to open cinemas with a 50% limit on seating capacity. With 12 additonal states and 2 UTs joining the fray on July 30th, cinema halls and multiplexes are now open across most of the states. States like Tamil Nadu and Maharashtra have not yet given permission for cinema halls and multiplexes to reopen.

With multiplexes and cinemas now operating acorss most states, the key question that comes up is the estimated footfall, and with the infectious delta variant still out there, are cinema goers likely to visit anytime soon? To understand the same, LocalCircles has conducted a survey on the likelihood of people visiting cinema halls or multiplexes in the next 60 days. The survey then compares the findings with the similar survey conducted in June to check if people’s plan to visit them has changed over the last month or so. The survey received 10,711 responses from citizens residing in 301 districts of India. 63% respondents were me while 37% respondents were women. 43% respndents were from tier 1, 28% from tier 2 and 29% respondents were from tier 3, 4 and rural districts. 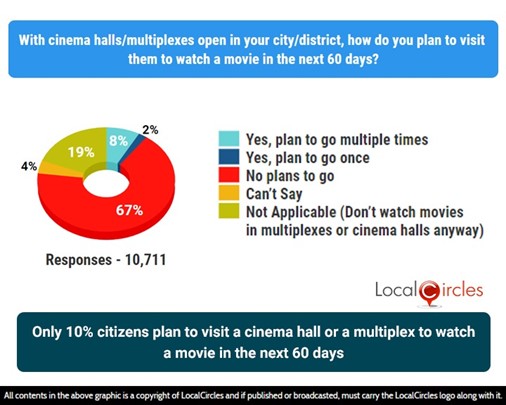 Though multiplexes and cinema halls will open from August 1, there has been only a slight month-over-month increase in those likely to visit; 86% of citizens likely to stay away

States that have allowed cinema halls to reopen have strictly mandated that there should be “no mask, no entry”, along with sanitisation checks, contactless service from tickets to food, etc. However, the implementation of the same across most of the cinema halls will be extremely difficult. 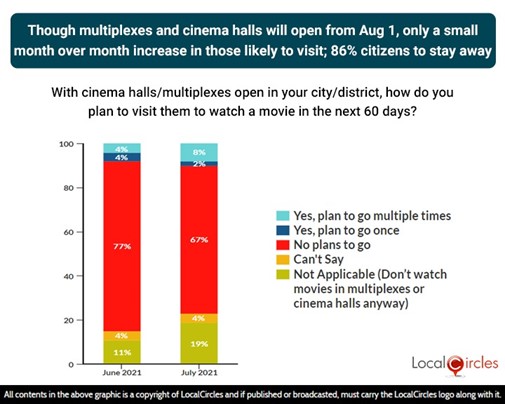 Visiting theatres and multiplexes to watch a movie has been one of the favourite recreational activities for many Indians, but the COVID-19 virus does make things tricky, especially because of the higher risk of spread in indoor poorly ventilated spaces. The findings of the LocalCircles survey indicate that only 10% of movie watchers are willing to go to cinema theatres in the next 60 days, which is only a 2% month-over-month increase from the survey conducted in June this year. The citizen’s response suggests that the cinema halls and multiplexes though open must scale their operations according to the projected and on-ground footfalls to pull through this difficult phase.