August 28, 2020, New Delhi: The Department of Consumer Affairs implemented the Packaged Commodity Rules 2017 on 1st January 2018 and mandated the display of MRP of every product on all ecommerce sites operating in India. It also mandated the display of the ‘best before date’ on all human consumption items being sold across ecommerce sites to help consumers make informed decisions.

These issues were first reported on LocalCircles in Dec 2016 which were then escalated to the Department of Consumer Affairs for modification via Packaged Commodity Rules 2017 amendment so ecommerce is brought under the ambit of legal Metrology. PCR 2017 amendment applies legal metrology rules to ecommerce and requires sellers on all ecommerce sites to display MRP for all packaged products and for all human consumption products like grocery, medicines, cosmetics, etc. the best before date of products.

LocalCircles has continuously been monitoring the consumer pulse on the compliance of these rules by ecommerce sites for the Department of Consumer Affairs. Two and a half years after PCR 2017 came into force, LocalCircles conducted its 30th month survey to check what has been the status in the last 3 months, especially as the Government is mandating display of Country of Origin on ecommerce sites. The survey received over 16,000 responses from consumers based in 228 districts of India.

Consumers were asked if most ecommerce sites that they have shopped at in the last 3 months are now disclosing MRP information on their site/app. In response, 65% said yes while 35% said no. 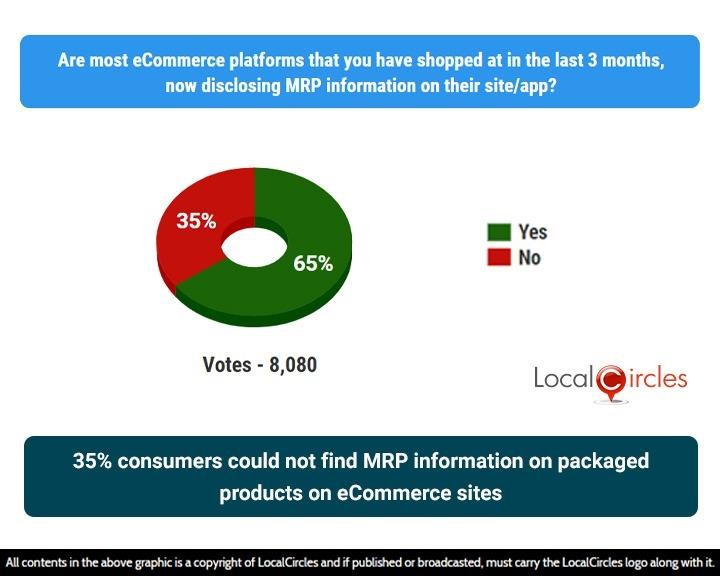 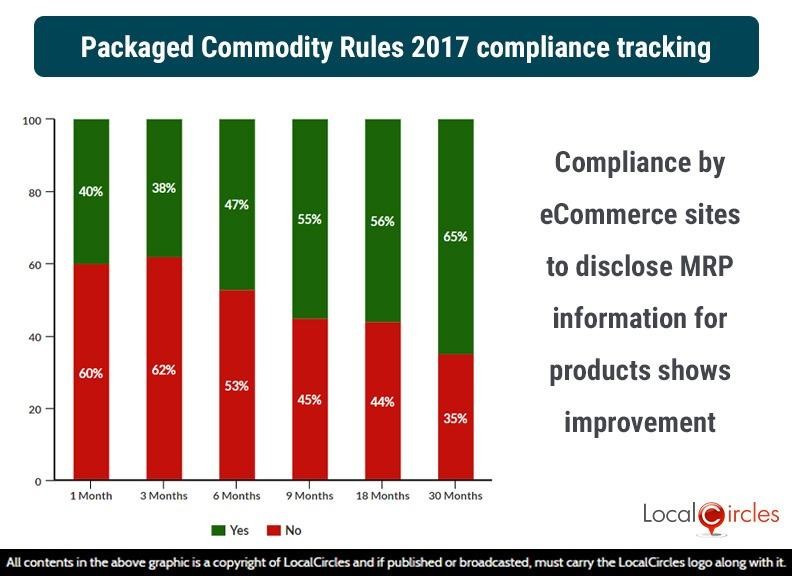 Giving more power to the consumer, the Consumer Protection Act,2019 came into effect from 20 July 2020, and with it, the Consumer Protection (ecommerce) Rules 2020 were also enforced from 23 July. As per the notification, these rules would cover all goods and services bought or sold over digital or electronic networks, and would be applicable to all models of e-commerce, including marketplace and inventory models. These rules will also apply to ecommerce entities like AliExpress, which are not established in India, but offer goods or services to consumers in India.

In the next question, 69% consumers could not find the best before date information on human consumption products on ecommerce sites. Only 31% said they were easily able to find it. 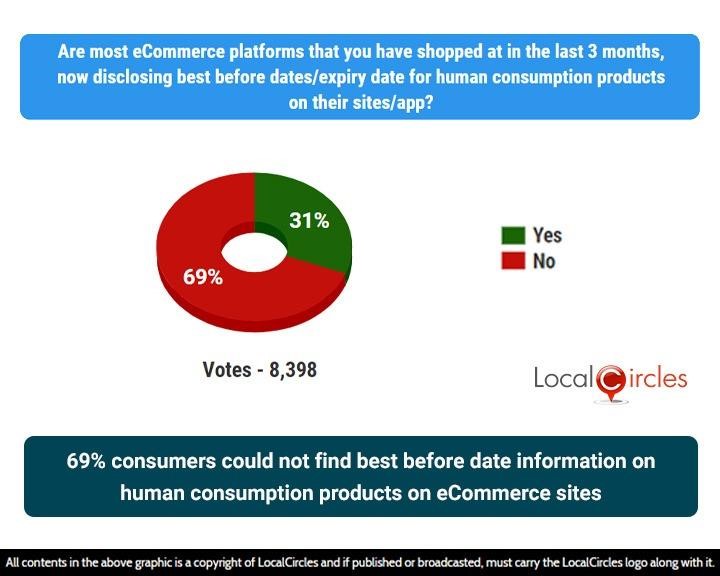 The Ecommerce Rules 2020 also clearly state that the sellers on ecommerce platforms are mandated to state the expiry date of the good being offered for sale, wherever applicable. The comparison shows that the situation, when it comes to finding expiry date of products on ecommerce platforms, has declined. The percentage of consumers who were not able to find this information in last year’s survey stood at 54% while it has increased to 69% this year.

Many small and mid-sized sellers on even the large platforms are yet to comply with this norm. For many packaged products for human consumption, consumers reported that they could not find the best before or expiry date displayed on ecommerce platforms. 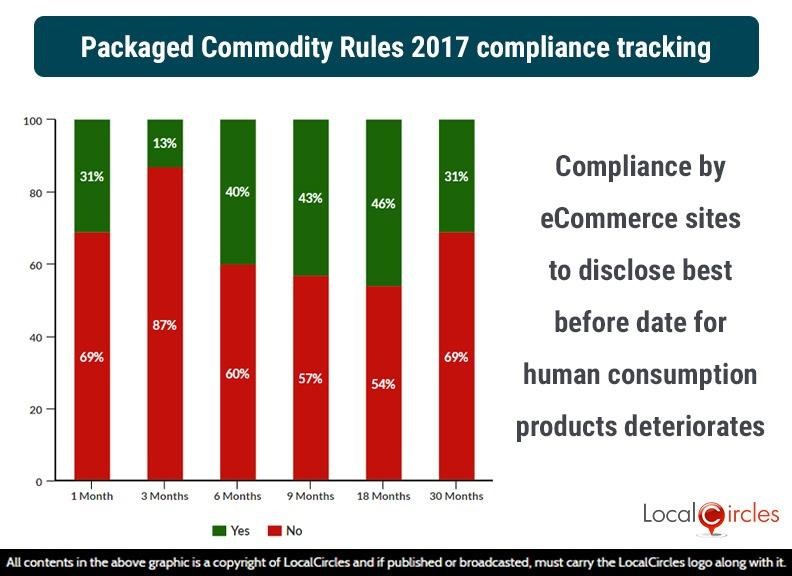 As per the new rules, ecommerce platforms will also have to display information of all products including the ‘country of origin’ which per the Government will enable the consumer to make informed decisions about their purchases. The Department for Promotion of Industry and Internal Trade (DPIIT) conducted multiple stakeholder meetings and has asked all ecommerce platforms to display ‘country of origin’ for all products by Sep 30th, 2020. The ecommerce industry has however sought 6-7 months from the Government to get the changes implemented for existing products as it requires them to pursue sellers to update this information in the product listings on ecommerce sites.

LocalCircles will be escalating the above findings to the Department of Consumers Affairs and the Legal Metrology Division so the above can be created awareness about and effectively enforced. Consumers, previously had demanded that image of the principal display panel on packaged products must be displayed on ecommerce sites. This will cover MRP, best before date, country of origin and many other information elements that a consumer may need when purchasing a product. The piece meal approach of adding requirements on an adhoc basis will increase compliance burden on sellers and ecommerce sites and leave the consumers confused. With smartphones becoming the norm, even the smallest of small sellers can easily click a picture of the PDP and upload it with other product images thereby making the experience and information availability for the consumer, similar to their experience at a retail store.

Some examples where the MRP disclosure rules are being followed:

Some examples where the ‘best before/expiry date’ disclosure rules are being followed:

Some examples where the MRP disclosure rules are ‘not’ being followed:

Some examples where the ‘best before/expiry date’ rules are ‘not’ being followed:

There are also many other companies which sell their products through their own websites and are not complying to either one, or both the PCR 2017 mandates of MRP and best before date display. Screenshots from 2 of such sites – Patanjali and Sri Sri Tattva – are given below.

Some ecommerce sites which were earlier not complying with these regulations have now started complying. However, there are still many ecommerce platforms which are either partially complying or not complying at all. It is to be noted that most of big sellers on ecommerce platforms like Appario and Cloudtail etc. have been complying with these rules but majority of the smaller sellers have not been complying. This is clearly evident through the product listings on these platforms. Now that the Ecommerce Rules 2020 have come into effect, it is imperative that strict enforcement of these rules by State Legal Metrology Controllers is done so that the cases of consumers being misled, can be minimized.