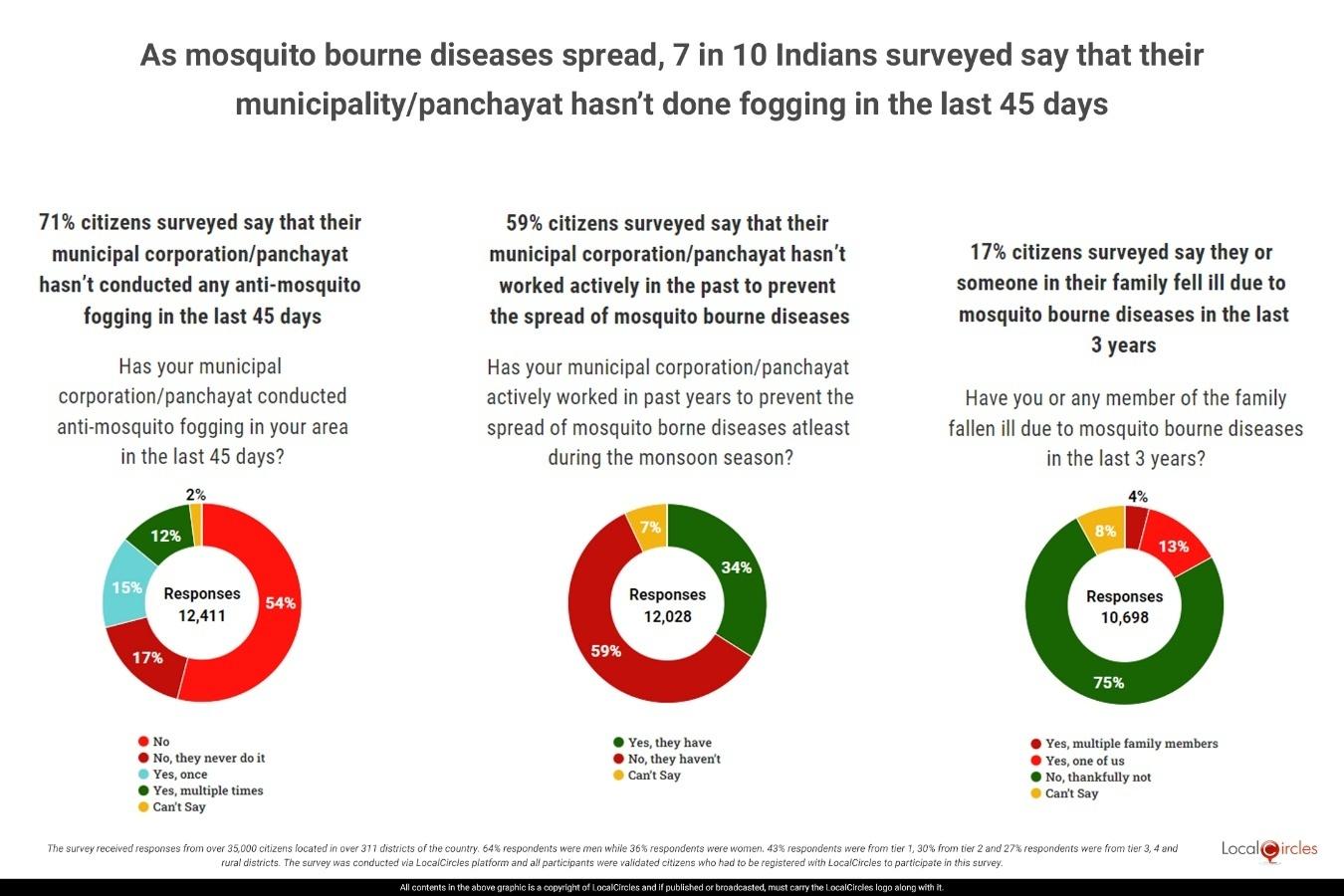 Aug 8, 2022, New Delhi: Are you well protected against a mosquito attack? Arrival of the monsoon is a major event in India, particularly the summer monsoon as it accounts for 80% of the rains annually. On the positive side, the monsoon replenishes the reservoirs, provides much needed water for agriculture, particularly in rainfed areas, among other benefits like providing relief from summer heat. On the flip side, due to waterlogging, poor sanitation, unsafe living conditions, etc., monsoon sees a rise in mosquito menace.

LocalCircles survey was instrumental in 2021 in mobilising some municipal commissioners in taking actions against the mosquito menace and hence when citizen complaints came starting early July, LocalCircles decided to undertake another survey to better understand the on-ground situation regarding mosquito fogging. The survey received over 35,000 responses from nearly 16,200 citizens located in 311 districts of India. 64% of the respondents were men while 36% were women. 43% of the respondents were from tier 1/metro districts, 30% from tier 2 districts and 27% respondents were from tier 3, 4 and rural districts.

17% respondents claimed that fogging to prevent mosquito breeding is never done in their area, while 54% admitted that no steps had been taken in the last 45 days by the local bodies

As mosquito borne diseases like malaria, chikungunya and dengue, etc., spread over 70% out of 12,411 respondents in the first poll shared their dismay at the fact that the local municipal corporation/panchayat have not conducted any anti-mosquito fogging in the last six weeks. In fact, 17% respondents claimed that fogging to prevent mosquito breeding is never done in their area, while 54% admitted that no steps had been taken in the last 45 days by the local bodies to prevent or contain mosquitoes in their area. However, 15% respondents revealed that anti- mosquito fogging had been done once in their area while another 12% shared that repeated fogging had been done by the local bodies or authorities. 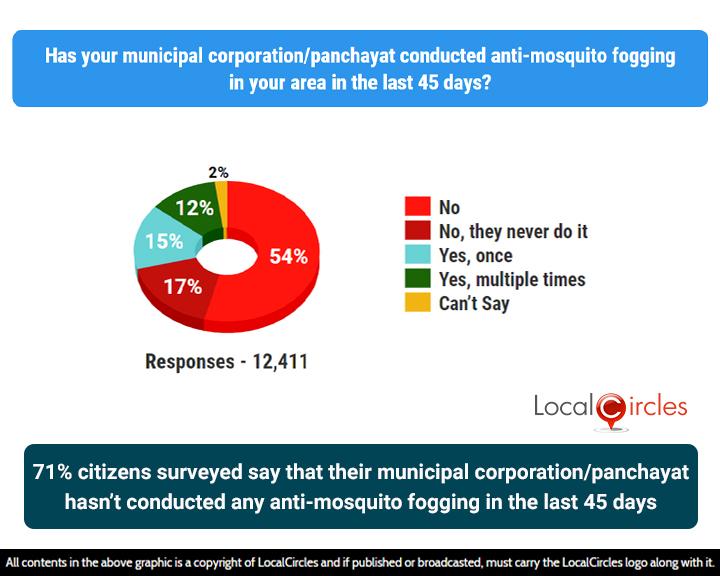 To ensure that this wasn’t just a 2022 phenomenon, LocalCircles asked citizens about whether their municipal corporation/panchayat has actively worked in the past to prevent spread of mosquito borne diseases like malaria, Chikungunya and dengue, etc. during the monsoon season, 59% of the 12,028 respondents said an explicit NO. 34% said that their local body has in the past conducted mosquito fogging while 7% did not know and opted for Can’t Say. 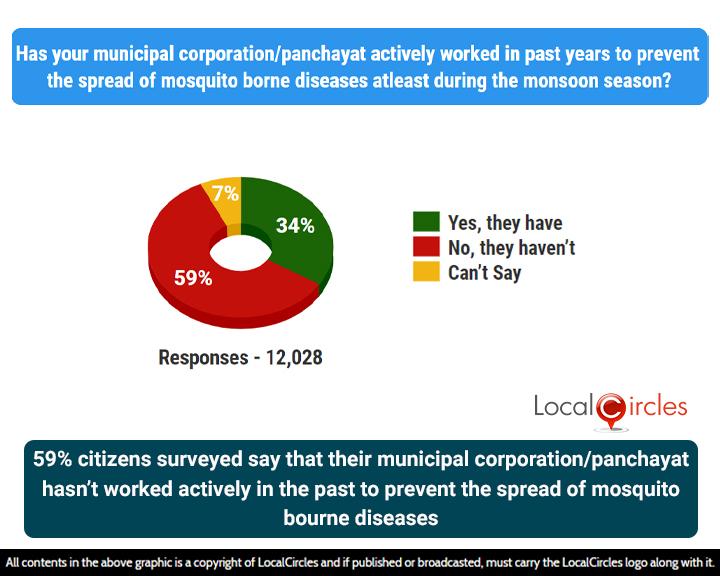 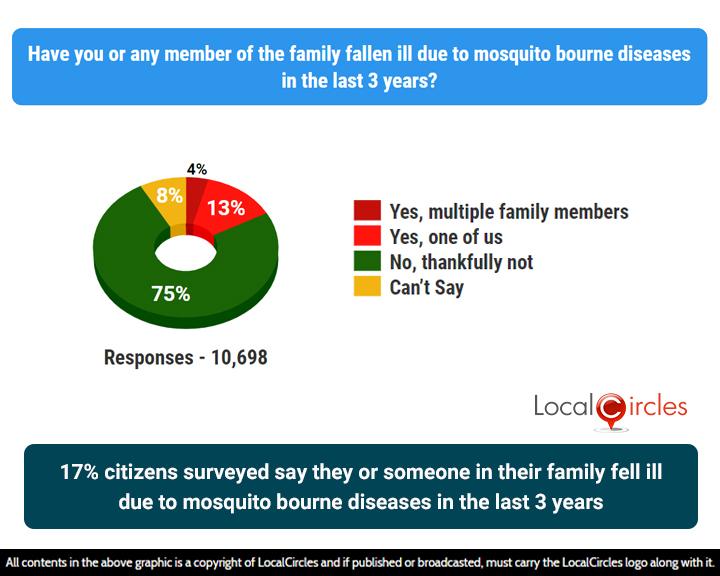 In summary, the LocalCircles survey has found that there is no effort being put in by many municipal corporations/ panchayats to protect people from mosquito borne diseases as in the last 45 days most have not undertaken the fogging exercise to contain mosquito breeding. Over 70% respondents reported that no preventive exercise like fogging has been undertaken in the last six weeks. Nearly 60% of respondents claimed the situation was no different this year from that in the past. 17% households have been impacted due to mosquito bourne diseases in the last 3 years amounting to 6% each year on average. If the percentage is applied to India’s 350 million households, it amounts to nearly 21 million households having one or more family members falling ill each year due to a mosquito bourne disease which is fairly significant to drive actions against mosquito menace on top priority.

It is critical that every state government fix the accountability on mosquito control to their municipal commissioners and panchayat heads who in turn should tie it to health officials in their team and local councilors and representatives. Also, it is important that schedules be laid and published in advance for all fogging activity and inspections so in case there are gaps, the same can be highlighted by people and redressed. As a nation, we need to address the issue of mosquito menace on priority, perhaps through a Swachh Bharat Mission Part 2 so it can receive the right focus from both Central and State Governments.

LocalCircles will share the findings with key stakeholders in Central Government as well as all State Chief Secretaries to ensure municipalities and panchayat heads understand the need for timely preventive action to protect the common citizen against mosquito borne diseases.

The survey received more than 10,000 responses from Indians residing in 352 districts of India. 61% of the participants were men while 39% were women. 43% of respondents were from tier 1 districts, 31% from tier 2 and 26% respondents were from tier 3, 4 and rural districts. The survey was conducted via LocalCircles platform and all participants were validated citizens who had to be registered with LocalCircles to participate in this survey.