Mood of the Consumer: GREEN SHOOTS EMERGING - 48% consumers plan to make discretionary purchases in the next 4 months with home renovation, whitegoods and travel likely to be top areas of spending

Mood of the Consumer: 48% consumers will make discretionary purchases in the next 4 months; Top areas of spending include home renovation & furnishings, white goods & travel 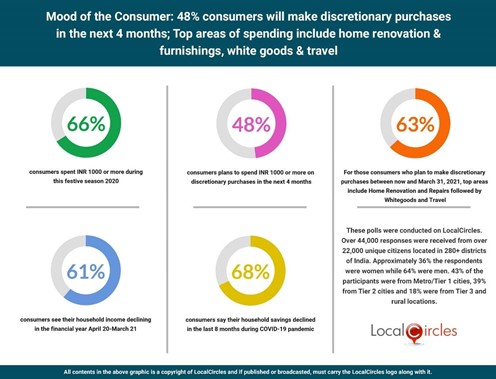 December 15, 2020, New Delhi: The festive season in India has ended in not so hyper-elevated celebrations dragged by one of the worst pandemics the country has endured in the last century. While many households saw their earnings and livelihood impacted during the lockdown and overall consumer spending in comparison to previous years was lower, as the economic conditions improved post August, approximately 10% more consumers ended up spending during the festive season in comparison to those who had planned to spend. India’s GDP in the September quarter contracted at a slower pace that fell 7.5% from a year ago compared with the June quarter’s record 23.9% contraction. GDP declined 15.7% in the first half.

LocalCircles conducted its bi-annual Mood of the Consumer survey to understand how the consumers spent this festive season, what their spending plans are for the next 4 months and where do household expect to be with their earnings and savings situation by end of FY 20-21. The survey received more than 44,000 responses from consumers across 302 districts of India. 62% respondents were men and 38% were women. 55% respondents were from tier 1, 26% from tier 2, and 19% from tier 3, 4 and rural districts. Household expenditure generally rises during festivals. The first question asked consumers, “How much did you end up spending this festive season?”. 9,478 responses were received. 37% voted “INR 1,000 - 10,000”, 20% voted “INR 10,001 - 50,000”, 9% voted “over INR 50,000”, and 33% voted “did not spend anything”. Per responses, 66% consumers said they spent INR 1,000 or more during this festive season. This is a 10% increase in the percentage of consumers who spent during the festive season than those who had planned to spend. 61% of consumers in the August survey said “they will spend during the festive season”. 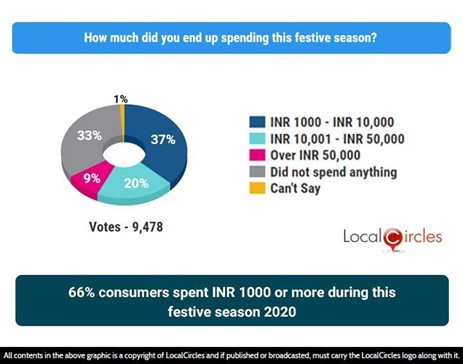 10% more consumers spent during the festive season than originally anticipated 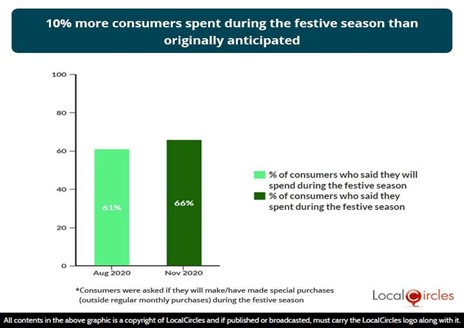 So “how has COVID-19 and general economic condition impacted consumers’ household savings in the last 8 months (April to November 2020)?”, the question asked consumers. Of 8,240 responses, 68% consumers said their household savings declined in the last 8 months during the COVID-19 pandemic. Per responses, 28% voted “reduced by 50% or more”, 25% voted “reduced by 0-25%”. In close to nine months of the pandemic, many consumers are yet to recover from the giant-fall in their personal finance facing job loss, salary cuts and delays. 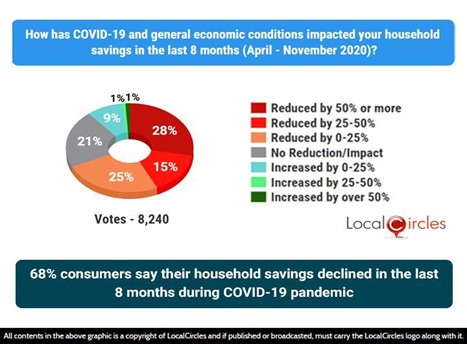 Citing the latest official data on India’s GDP performance, experts suggest that there was a “V-shaped” recovery in manufacturing industries, especially in consumer durables, which has shown 0.6% growth in the September quarter against contraction of 39.3% in the first quarter. The next question was aimed at understanding the tentative amount of money consumers would spend on discretionary purchases such as four-and two-wheelers, or home renovation or home repairs, travel, etc – besides their ongoing personal finance savings, regular domestic expenses – in the period of 4 months, from December 1, 2020 to March 31, 2021. It asked, “How much do you plan to spend on discretionary products (products/ services) in the next 4 months i.e., before March 31, 2020?”. Responses from 9,139 consumers were received. Per aggregate responses, 48% of consumers plan to spend, starting from the minimum amount of INR 1000 extending up to INR 50,000 on purchasing discretionary products or assets in the next 4 months. One of the big takeaways is that 10% households plan to spend over INR 50,000 on discretionary purchases in the next 4 months while 21% households plan to spend between INR 10,000-50,000 in this period. This would mean good news for many sectors of the economy who saw slowdown in consumer demand in the first six months of FY 20-21. Demand in sectors like travel, tourism, home renovation and repairs took a significant hit during this period as many remained locked in houses and were reluctant to get any home renovation work done due to the fear of the virus. Similarly, most families did not undertake travel by air, train or road due to lockdowns and spread of COVID-19. 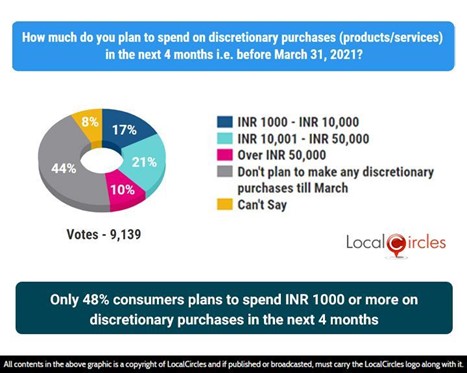 To understand Indian consumers’ spending behaviour who plan to definitely purchase discretionary products or assets, the survey asked consumers, “What will be the major category in which you definitely plan to make discretionary purchases between now and March 31, 2020?”. Responses from 8,929 consumers were received. 35% of consumers voted “home renovation and repairs”, 14% each voted “whitegoods and appliances” and “travel”, 12% voted “smartphone and gadgets”, 7% and 2% consumers voted “real estate” and “automobile”, respectively. Per result, home renovation and repairs, whitegoods and travel are top areas where consumers plan on spending in the coming 4 months.

For those consumers who plan to make discretionary purchases between now and March 31, 2021, top areas include Home Renovation and Repairs followed by Whitegoods and Travel 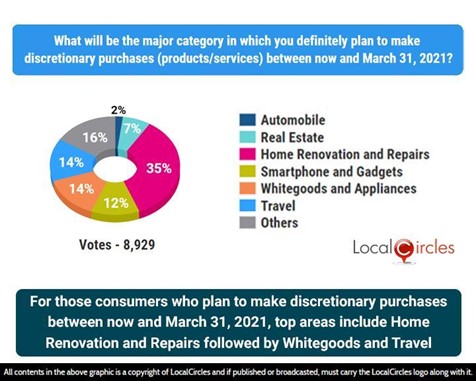 Given all the plans of households to spend on discretionary items or purposes, it was pertinent to get an understanding of the current financial status of households in regards to earnings. The next questions asked consumers, “Where do you see your household income for the financial year April 2020 to March 2021?”, where responses from 8,060 consumers were received. Notably, 61% consumers see their household income declining in the mentioned period. Individual data suggests, 31% voted, “lower by over 25% than last year”, 27 % voted “lower by 5-25%”, while 25% voted “it would be the same as last year.” 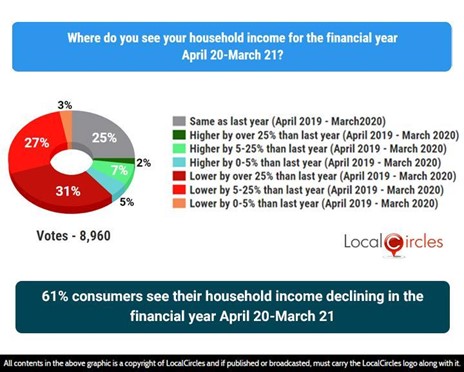 Mood of the Consumer: Optimism rises as 15% fewer households now expect their annual earnings to decline this year 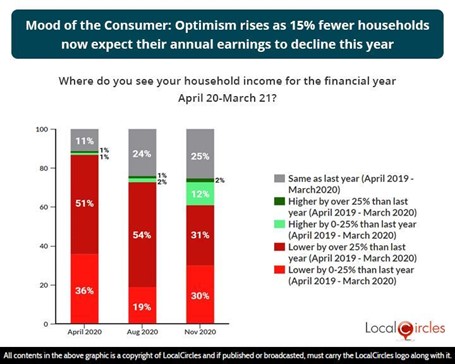 With the economic recovery seen in the last 3 months, there is clearly a rise in optimism and 15% fewer households now expect their FY 20-21 earnings to decline in comparison to last year. While for the majority of the households, the earnings this year will be lower than last year, the real story is in the reduction of uncertainty about the future. Many are now confident that while this year has been impacted, their job has not been lost and things are getting back on track with their business or employer’s business and they will likely see their earnings increase or go back to previous year levels.

Though a lot of what happens in the next 4 months will depend on what happens with spread of COVID-19 in the next 4 months and the vaccine. The COVID-19 vaccine is expected to become available in India by early February and if that happens, barring another major wave of cases not coming, it will start having a positive impact on the country’s daily case load. India’s daily case load which had hit almost 60,000 in September is now down to approximately 50% with most states seeing the decline. Experts believe that once India starts vaccinating the most vulnerable, i.e. the healthcare and frontline workers and the senior citizens and those with co-morbidities, the daily case load and the spread of COVID-19 will significantly decline. All of this is expected to help the Indian economy get back on its growth trajectory and keep consumer demand strong in FY 2021-22.