As states remove mask mandates, 9 in 10 Indians now say that most in their area/city/district either do not have a mask at all or are not wearing it properly 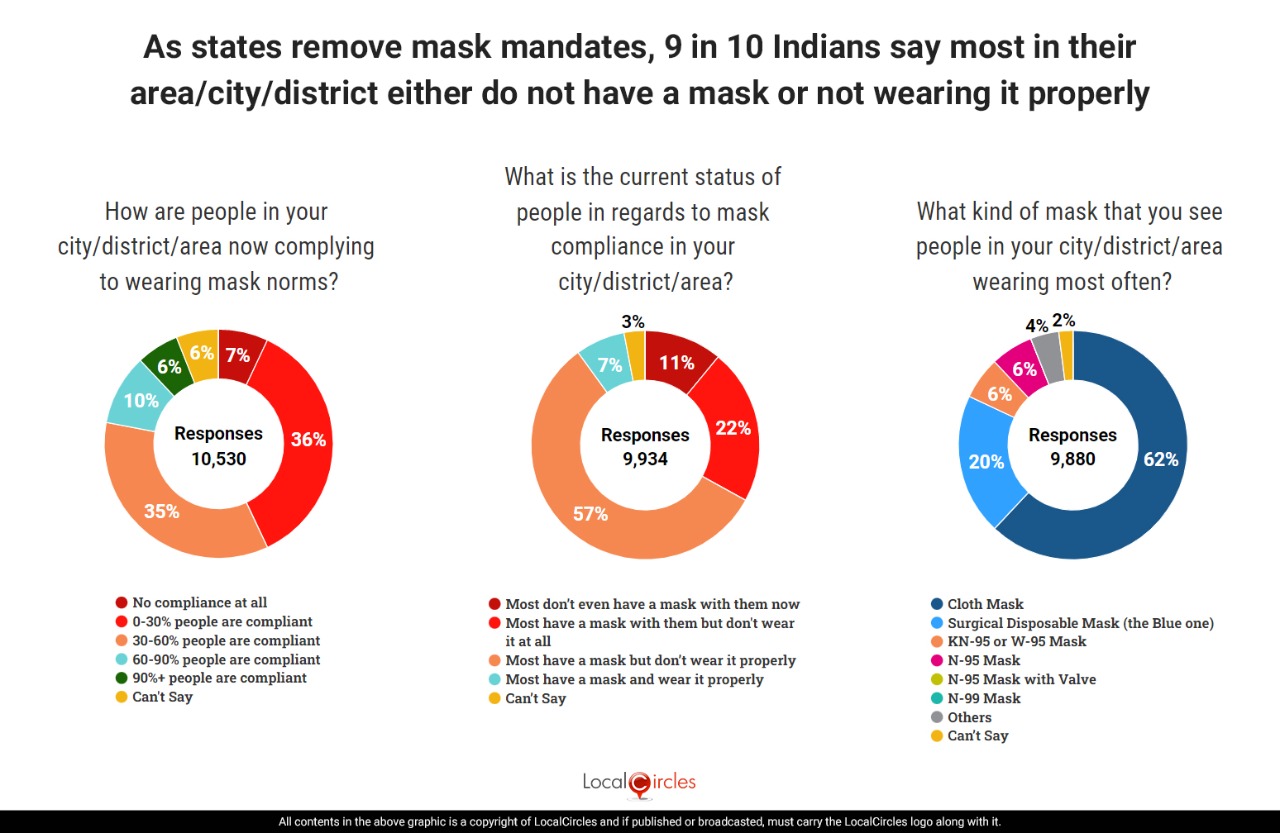 April 5, 2022, New Delhi: India is now experiencing a steady decline in COVID cases with the test positivity rate (TPR) below 1%, and less than 2000 reported cases a day. Though the availability of RAT tests has impacted daily reported COVID numbers, most citizens do not have COVID positives being reported in their social networks since early March. As a result, starting from the beginning of April, states like Delhi, Maharashtra, Haryana and Punjab have removed the mask mandate, along with other COVID restrictions. Many other states are also reportedly considering the same.

On the other hand, the World Health Organisation (WHO) has raised an alarm regarding rising COVID cases globally despite testing levels dropping significantly. Many countries in Europe like France, United Kingdom, Germany, Netherlands and those in Asia like Hong Kong, South Korea, Vietnam and China are experiencing a huge surge in cases. The surges around the world are being driven by BA.2 variants, its sub-lineages like BA.2.2 and more recently the Omicron XE mutant which is a BA.1 and BA.2 recombinant. China now has over 50 million people in lockdown, including those at major business centers like Shenzhen and Shanghai with the highest daily cases being reported, reminding the world of January 2020, when the initial surge was reported in Wuhan, China. The Center for Disease Control in China has issued a stark warning on Deltacron, citing that the worst as no recombination events involving large genomic fragments (like “Deltacron”) have been found in SARS-CoV-2 before.

In India, the Genomics Consortium (INSACOG) has now reported 16 cases of BA.2+S:I1221T or the BA.2.2 sub-lineage of Omicron, which is known to cause the latest surge in Hong Kong. Further, over 560 cases of Deltacron, a combination of Delta and Omicron variants, have also been reported in India last week. In such a scenario, the big question is, though India’s daily COVID cases have seen a steady decline, can we drop the mask mandate? To understand where things stand currently in regards to masking compliance as states remove the mask mandate, LocalCircles has reached out to citizens across India via a survey. The survey received more than 30,000 responses from citizens residing in 349 districts of India. 68% respondents were men while 32% respondents were women. 48% respondents were from tier 1, 31% from tier 2 and 21% respondents were from tier 3, 4 and rural districts.

As states remove mask mandates, 9 in 10 Indians say most in their area/city/district either do not have a mask at all or are not wearing it properly 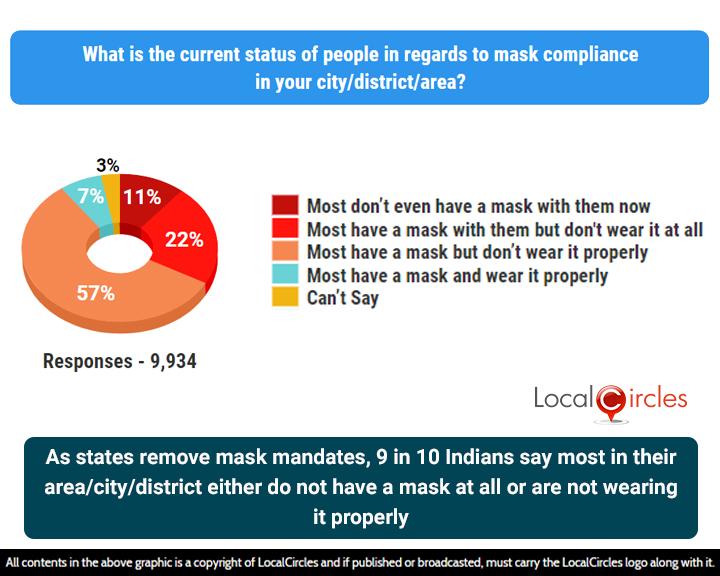 As states remove maks mandates, only 6% surveyed now say mask compliance is effective in their city/district/area

According to inputs from citizens on LocalCircles, most states have not been enforcing the mask mandate and now some have removed it formally and others are considering the same. This has led to really low compliance levels. The following question in the survey asked citizens, “How are people in your city/district/ area now complying to mask norms?” In response, 7% of citizens said “No compliance at all”. There were 36% of citizens who said “0-30% people are compliant”, while 35% said “30-60%” and 10% said “60-90%” people are compliant”. 6% of citizens said “+90% people are complaint”. 6% did not have an opinion. This means that as COVID cases reduce, only 6% of Indians say mask compliance is effective in their area/district/city. This question in the survey received 10,530 responses. 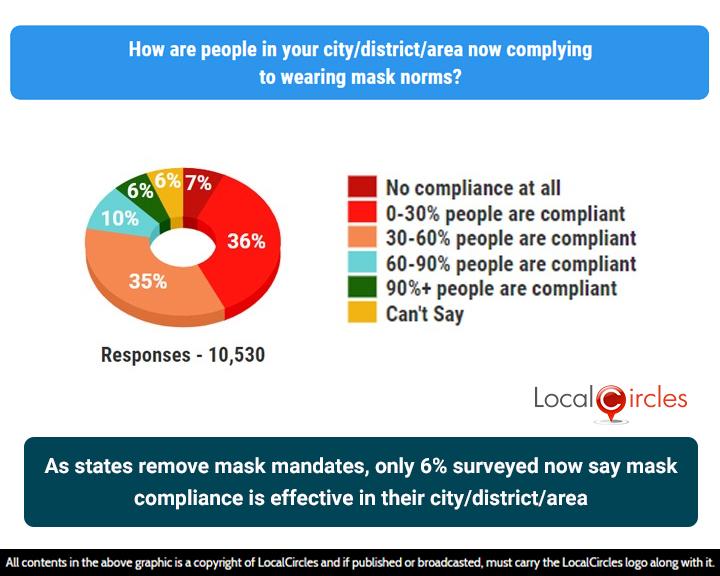 Of those who are wearing masks, respondents say, 2 in 3 are wearing a cloth mask which provides limited protection from COVID

There has been an introduction of several kinds of masks since the beginning of the pandemic. However, medical experts have suggested that most provide limited protection from COVID, especially the Omicron variant which is highly transmissible. The final question in the survey asked citizens “What is the kind of mask that you see people in your city/district/area wearing most often?” In response, only 6% of Indian citizens said “N-95 mask” and another 6% said “KN-95 or W-95 mask”. There were also 20% who said, “Surgical disposable mask (the blue one)” The majority, 62% of citizens said “cloth mask” and 4% said “others”. 2% couldn’t say. This means that of those who are wearing masks, respondents say 2 in 3 are wearing a cloth mask which per health, air and transmission experts provides limited protection from COVID. This question in the survey received 9,880 responses. 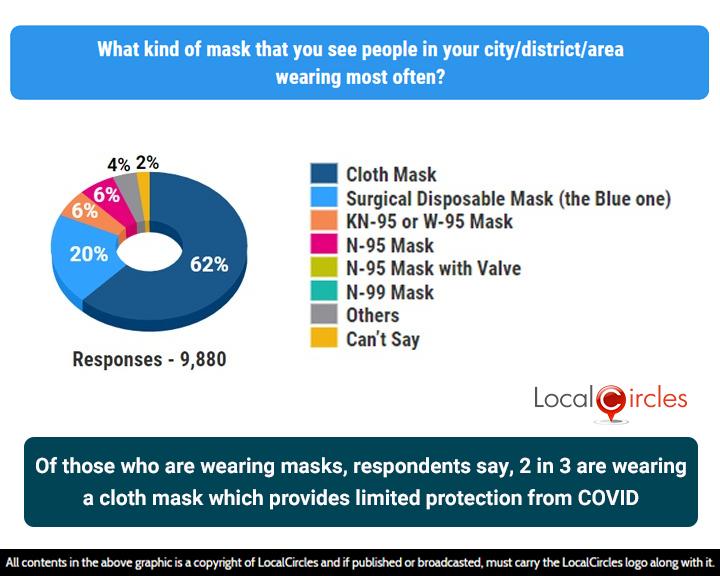 In summary, as COVID cases reduce and states remove mask mandates, 9 in 10 Indians say most people in their area/city/district either do not have a mask at all or are not wearing it properly. Further, only 6% surveyed say mask compliance is effective in their city/district/area. Also, of those who are wearing masks, respondents say that 2 in 3 are wearing a “cloth mask” which provides limited protection from COVID.

Given the fact that the lack of masking indoors in public places and outdoors in crowded areas is risky, removing the mask mandate in case of a 4th wave can put India at high risk. With new mutations being found each week worldwide and cases rising in so many countries and India reopening all international commercial flights, a 4th wave in India is imminent and is only a matter of time. Under such circumstances, according to some citizens, removing the mask mandate signals end of the pandemic to the large majority, which means that when the 4th wave starts, India could be very vulnerable very quickly. As per the survey, the compliance is very low already and such mandates issued by all state governments could lead to masking becoming an exception rather than the norm. Many countries in Europe that removed masking norms in February are learning a difficult lesson currently. India must take a lesson from their learnings and consider taking a cautious approach instead of an aggressive one.