February 12, 2022, New Delhi: In light of the Omicron variant led 3rd wave, the Government of Karnataka imposed a series of restrictions in early January, including the shutdown of in-person schools to curb the spread within the state. The test positivity rate (TPR) in Karnataka has shown a gradual decline at 5%, which had peaked on January 24th at over 33%. Though testing has declined considerably, the feedback from citizens on LocalCircles also indicates that there is a clear decline in cases.

India continues to record a decline in the daily COVID cases, coupled with a decline in TPR weeks after a surge that recorded nearly 350,000 daily cases. Data suggests that most major cities have already witnessed the peak of the 3rd wave, and the numbers are declining. Further, the latest genome sequencing data shows that the new BA.2 sub-variant, which is causing an extended Omicron surge in some other countries, is already prevalent in India reducing the likelihood of the 3rd wave getting prolonged. However, the risk of reinfection remains, and it is critical for people to follow the COVID protocols.

The Government of Karnataka re-opened schools from January 31st, 2021 to bridge the learning gap of students and to ensure their social, emotional, and mental well-being. The government stressed on the importance of adhering to COVID-19 appropriate behaviour. As parents have been expressing their opinions on LocalCircles about in-person schools, LocalCircles conducted a survey on current status of they sending children and if not when is it that they will feel comfortable in sending children for in-person school. The survey received 3,885 responses from residents across 22 districts of Karnataka. 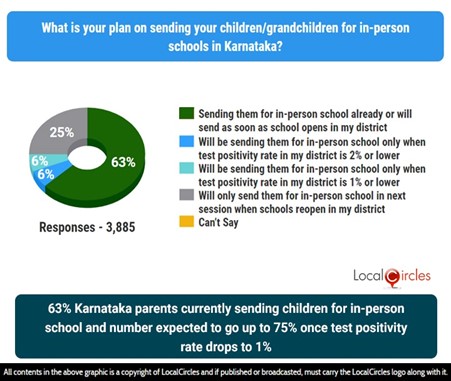 It must be noted that the Omicron variant can spread between two children within 2 minutes if they are not masked and less than 6 feet apart in an indoor setting. The most common scenario is a snack or lunch break held indoors where children are eating and the masks are off. The risk is lowest if children are wearing a N-95/KN-95 mask and having their snack/lunch outdoors or shorter school sessions without a lunch break till TPR rate declines to 1%. 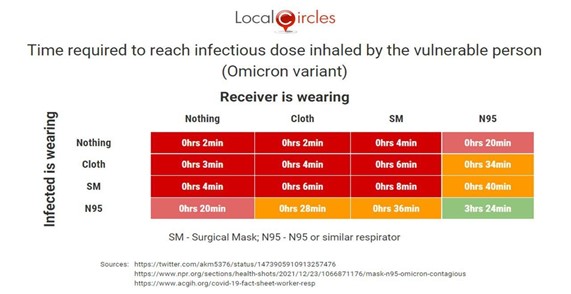 LocalCircles will be sharing the findings of this study with Chief Secretary of Karnataka for their consideration as schools function going forward.

3,885 responses from residents across 22 districts of Karnataka. The survey was conducted via LocalCircles platform and all participants are validated citizens who had to be registered with LocalCircles to participate in this survey.