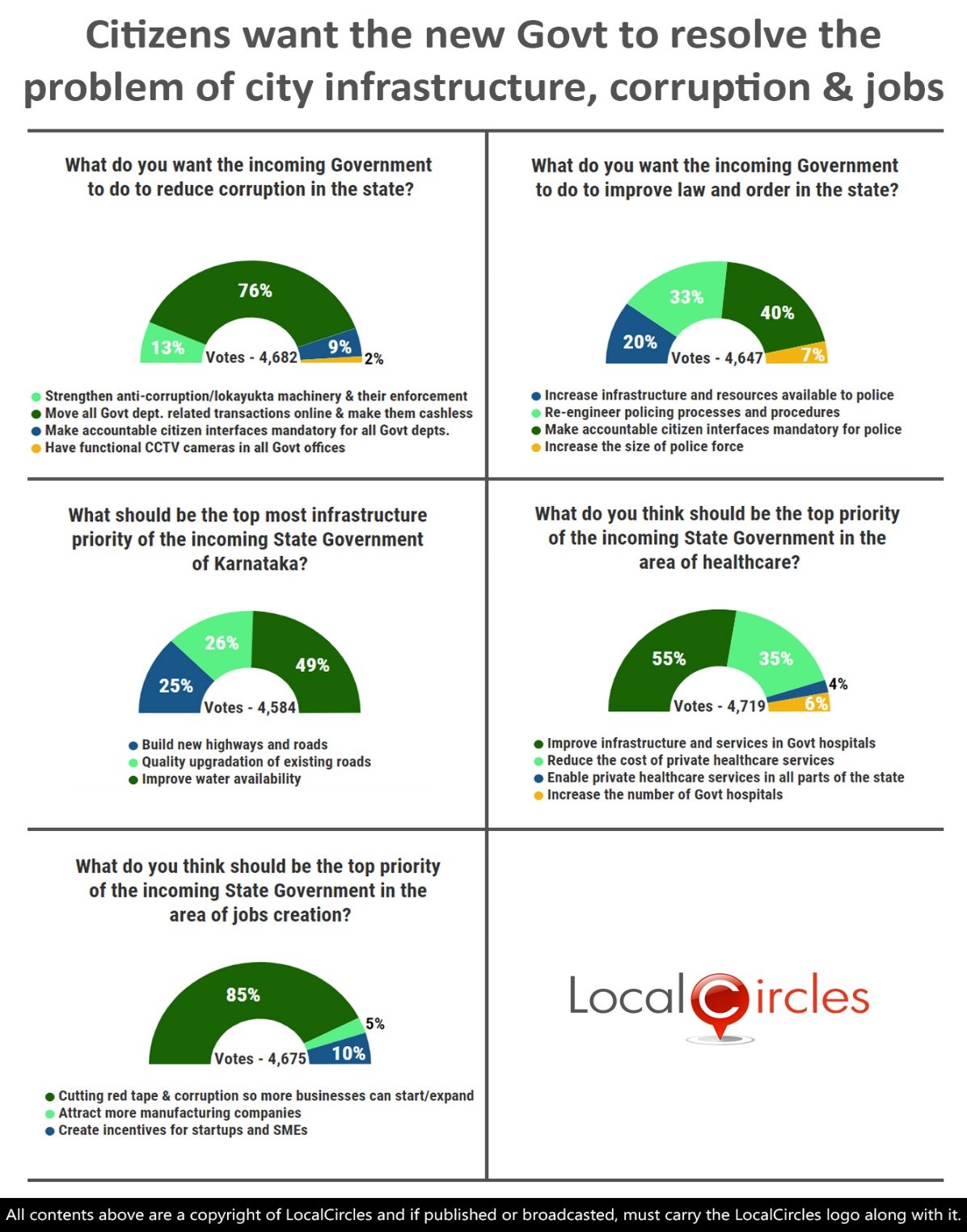 May 2, 2018, New Delhi: Karnataka is all set to go to polls on May 12th to elect the next state government. This is an important election as it is expected to set the trend for the national elections for Lok Sabha in 2019 hence they are being closely followed by the rest of the country. It is also important that the elections be fought on real issues which affect and bother the citizens. Frivolous issues that would divide the electorate on the basis of caste or religion do not serve interest of the state.

Hence its important for all political parties to be aware of what do the citizens of the state really want from them. So that the political debate and discussion in the run up to the election can be based on the citizens’ demand. To understand what the citizens’ of Karnataka want from the upcoming government, LocalCircles conducted a 5-poll survey across the state which received 22,000+ votes. One of the biggest issue facing the state government is corruption as it is endemic. Several cases of corruption like Belekeri Port scam or Karnataka Wakf Board land scam have been unearthed in the recent times putting the state high up in the corruption list.

In the first poll, 76% citizens said they want the incoming state government to move all govt-citizen transactions online and make them cashless to reduce corruption. 13% said they would like the anti-corruption/lokayukta machinery to be strengthened and enforced. 9% want accountable citizen interfaces to be made mandatory for all government departments while 2% want CCTV cameras to be installed in all government offices.

A discussion on how to eradicate corruption in the state is something that all political parties should define in their manifesto.

What do you want the incoming Government to do to reduce corruption in the state? 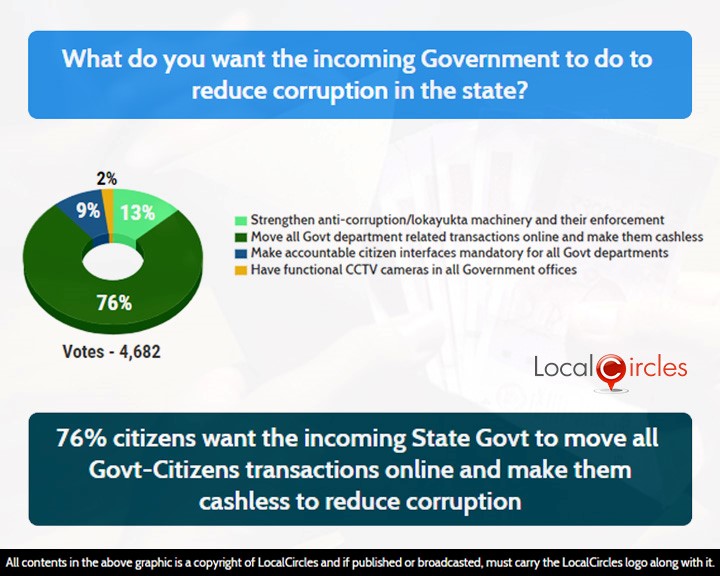 What do you think should be the top priority of the incoming State Government in the area of healthcare? 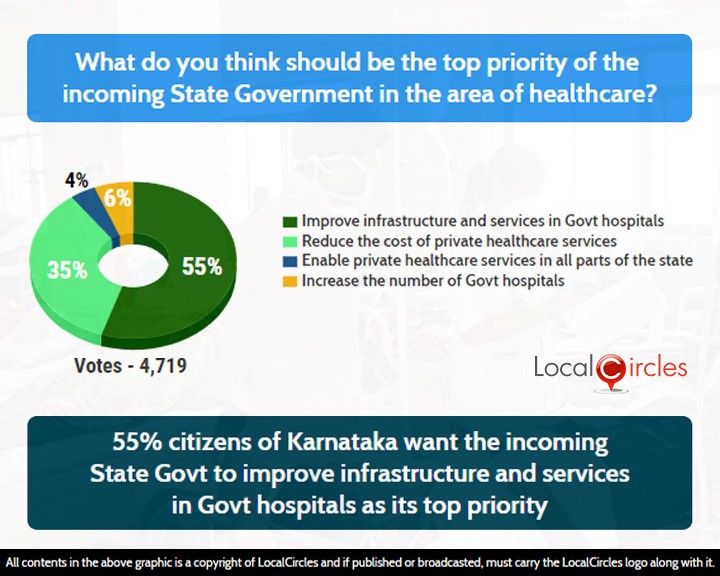 What should be the top most infrastructure priority of the incoming State Government of Karnataka? 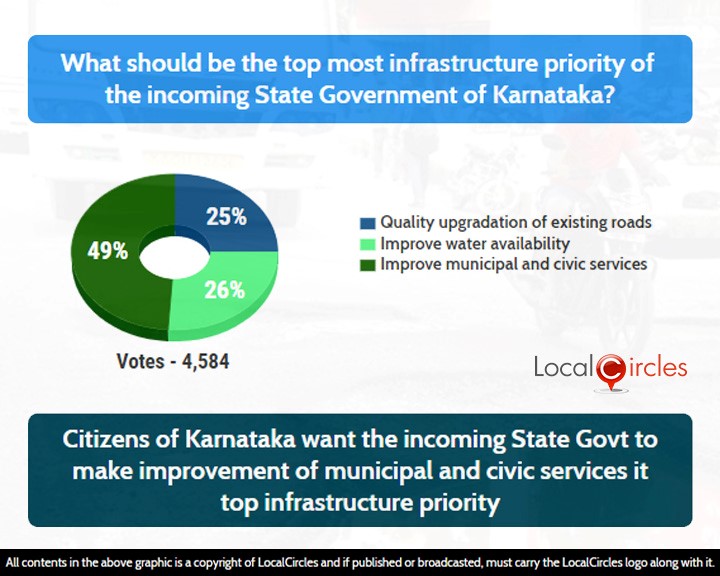 In the area of job creation, 85% said that the incoming government should work on cutting red tape & corruption, so more businesses can start or expand. Another 10% want incentives to be created for startups and SMEs while 5% want them to attract more manufacturing companies.

What do you think should be the top priority of the incoming State Government in the area of jobs creation? 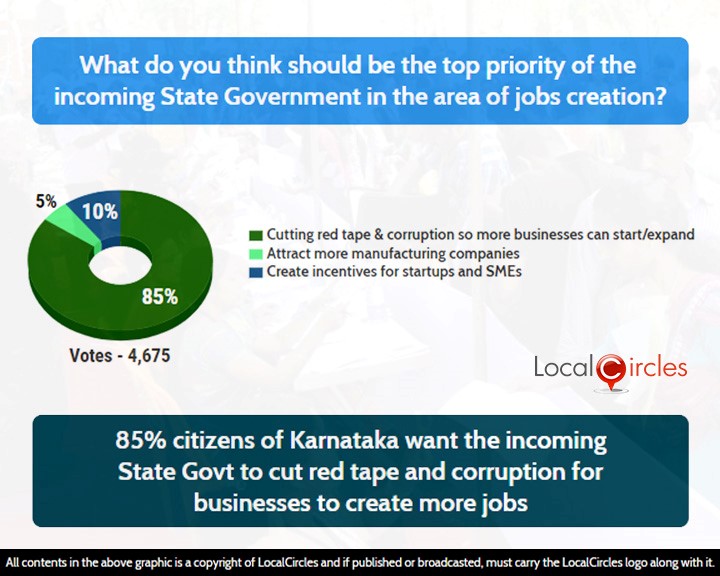 One of the most crucial area for the state is law and order, economic growth also happens once the rule of law is recognized. The final question was on improving law & order in the state, around 20% citizens said the infrastructure and resources available to the police should be increased and 33% said policing processes and procedures should be re-engineered. 40% said an accountable citizen interface should be made mandatory for the police while 7% said the size of the police force should be increased.

What do you want the incoming Government to do to improve law and order in the state? 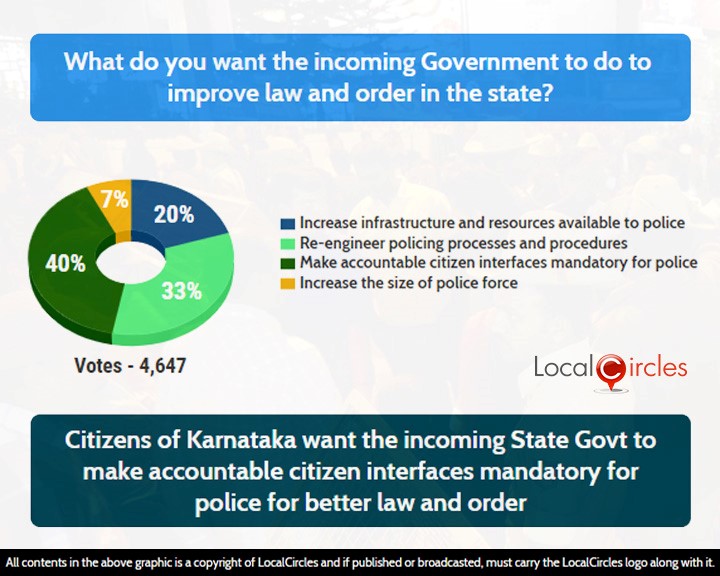 Citizens want the incoming Karnataka Government to resolve problems of city and make day-to-day life easier for them. Among the various issues, they want the government to concentrate on developing the state’s infrastructure, reduce corruption and create more jobs.