As Government gets ready to resume all international commercial flights from March 27th, Nearly 7 in 10 citizens surveyed continue to oppose the move

March 26, 2022, New Delhi: The Government of India has announced the resumption of scheduled commercial international flights from March 27th as overall daily COVID cases in India continue to decline to 0.25% daily test positivity rate. India also restored valid e-tourist visas issued for 5 years to nationals of 156 countries, along with the regular paper tourist visa. Long duration 10 years regular tourist visa to the citizens of the US and Japan have also been restored. Per media reports, United Airlines and American Airlines will launch nonstop flights to Bangalore from the US while Air Canada will operate 21 weekly return flights to Delhi from Canada. Emirates flights to India will return to the pre-pandemic frequency in a graded manner while Lufthansa and Swiss international airlines will double their flights to Delhi and Mumbai post-March.

The Government maintains that international operations shall be subject to strict adherence to the Ministry of Health & Family Welfare guidelines for international travel. Government officials have also been directed to maintain heightened surveillance as cases in China, Singapore, Hong Kong, Vietnam and some European countries surge, owing to the more transmissible BA.2 and its variants. Hong Kong, for instance, is going through its highest ever death rate with 300 daily deaths while South Korea is currently witnessing more than 3.8 lakh cases per day, with the daily TPR approximately at 50%. A TPR lower than 5% is a threshold the WHO considers desirable. Anything greater than 5% is supposed to be a sign that the epidemic is out of control. The WHO has also voiced concern over the growing number of cases globally, stating that these numbers are being recorded despite a decrease in testing in many countries.

Many citizens have been expressing their concerns about GOI’s stance to restart flights from international countries at a time when there is a strong surge in COVID cases in Europe and Asia as it could pose an imminent danger of a rise in cases of BA 2.2 sub-lineage of Omicron in India. In fact, the BA 2.2 variant has already reached India, with the Indian SARS-CoV-2 Genomics Consortium (INSACOG), which conducts genome sequencing of the coronavirus, reporting over 10 such cases in Maharashtra, Puducherry and Ladakh. Based on genome sequencing data, the predominant variant in India currently is BA.2 and globally experts suggest that BA.2 infection does not provide immunity from BA.2.2.

Basis public feedback and numerous countries experiencing a surge in COVID cases including South Korea, Hong Kong, Vietnam, Germany, Italy among others, LocalCircles has conducted another survey to understand the opinion of citizens on GOI’s decision to restart commercial international flights from Mar 27, 2022. The survey received 9,992 responses from people across the country.

69% citizens against restarting of full schedule of commercial international flights from March 27 in light of BA.2.2 and related mutations; suggest restarting only if TPR in the foreign country is in low single digits 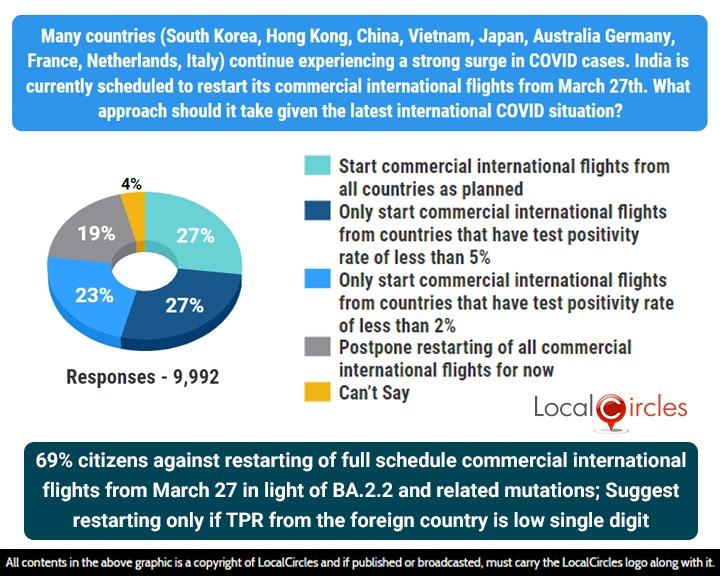 As Government orders a resumption of international commercial flights from March 27th, people stay firm in their opposition of restarting them from countries experiencing COVID surge

In a survey published on March 11th by LocalCircles, 73% of citizens said they want the Government to only restart commercial international flights from countries that have the test positivity rate (TPR) in low single digits. Though this percentage has marginally declined to 69% in the current survey, however, as Government orders a resumption of international commercial flights from March 27th, people stay firm in their opposition of restarting them from countries experience COVID surge. 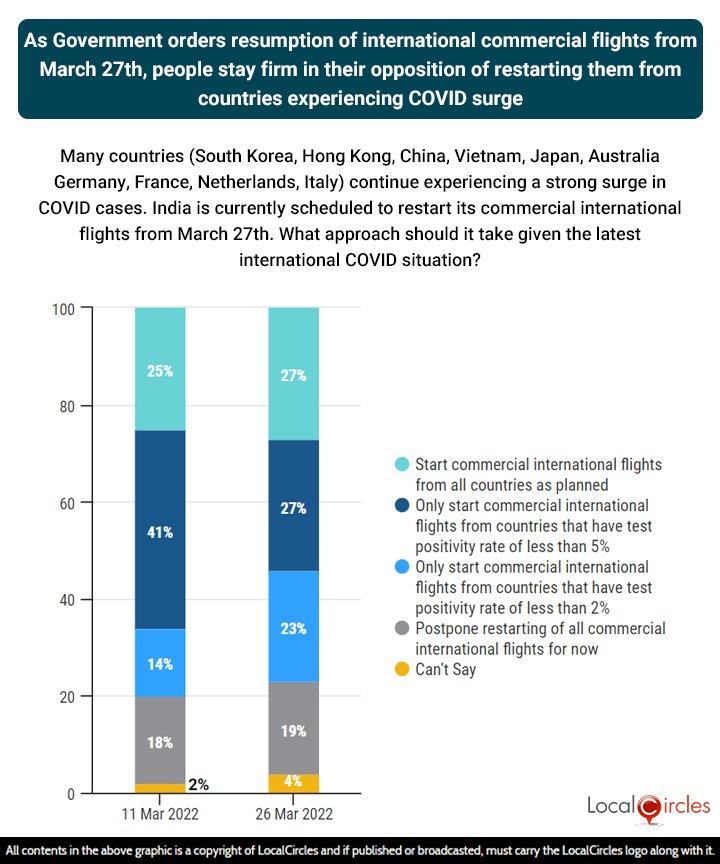 In summary, the survey indicates that in light of the fast-spread of COVID cases led by the BA 2.2 sub-lineage of Omicron in several countries in Asia and Europe, 69% of citizens are against India restarting full schedule commercial international flights from Mar 27, 2022. Though this percentage has marginally declined from 73% from the previous survey conducted during the 2nd week of March, however, people stay firm in their opposition of restarting international commercial flights from March 27th, from countries experience COVID surge.

People want the Government to take a cautious approach and start flights with countries that have TPR under 5% and preferably 2%. Till the TPR for a country does not fall to the 5% threshold, flights should be kept suspended, according to the many of people surveyed.

LocalCircles will be sharing the findings of the survey with all key stakeholders in Central Government so it can be considered as decisions regarding restarting of commercial international flights are operationalised.