Impact of Covid variants and India’s 2nd wave: 2 in 3 still in favour of suspending arrivals from UK and South Africa to contain Coronavirus variants

March 28, 2021, New Delhi: Direct lineage of SARS-COV2 variants, especially B.1.1.7 (UK variant) and B.1.351 or E484K (South African variants), have been detected in different parts of India amid an upward trajectory in the number of active Covid cases in the country, with over 60,000 cases now being reported daily. This is a 5X increase in the daily case load in 45 days which were approximately 12,000 on Feb 12th. With limited capacity to do genome testing, some 10,787 samples from 18 Indian states have shown so far 771 cases (736 of UK variant, 34 South African variant, and 1 Brazilian variant). The Chief Minister of Punjab Amarinder Singh announced that 81% of the cases found in his state based on genome testing are of the B.1.1.7 (UK variant) type. Direct flights to/from UK that were suspended for two weeks after citizens via LocalCircles had demanded so were resumed on Jan 8th despite lack of public approval. Punjab has direct flights between UK and Amritsar that have been running as part of the Vande Bharat program.

It is not just Punjab that has identified the existence of B.1.1.7 in 18 states. Maharashtra is seeking the highest ever surges with 35,000 case per day and in Delhi the daily case load has tripled from 500 to 1500 in a matter of 5 days. 60% citizens in a related LocalCircles survey felt that this new surge is driven by variants. While the Government has not accepted that yet, it is known that the B.1.1.7 is 50-60% more transmissible than the original COVID-19 strain. The strain has also impacted the young much more than the previous COVID-19 strain.

Though there will be no vaccine for the young atleast till end of this year, India has crossed 6 crore inoculations of adults and is vaccinating between 20-30 lakh citizens daily with many of the senior citizens and those with co-morbidities being covered and will be inoculating people above 45 years come April 1; however, it will be the end of 2022 before the entire citizens in the country can be vaccinated, and that is why this second wave of COVID is extremely worrying to many.

LocalCircles in late December, based on public feedback, had escalated to the Government the risk of mutant Coronavirus urging that all flights from the UK and other high-risk countries be shut till the end of January. In the survey, 64% of citizens wanted bubble international flights shut with countries, particularly the UK, having cases of the new strain. The same was done, however, the UK flight shutdown was resumed after 2 weeks from January 8th 2021.

A number of citizens have expressed that the flight resumption has led to the B.1.1.7 rising in the country and while official numbers only report 800 or so such cases, people feel that the numbers are grossly understated because less than 5% samples are going for genome testing. Given the fact that B.1.1.7 and B.1.351 have spread to many countries, LocalCircles asked citizens if any restrictions on international flights should now be implemented via a survey. The survey received over 8800 responses from citizens located in 244 districts of India.

It is estimated that the UK variant has spread to more than 70 countries, while South African variant is in more than 30 countries. The survey asked citizens, “Given that so many states in India have the B.1.1.7 (UK variant) and B.1.351 i.e., E585K (South African variant) of Coronavirus, what action should be taken now to limit the growth of the cases in the country?” In response, 22% said “suspend bubble flights from UK and South Africa for one month”. Breaking down the poll, 43% of citizens said “suspend bubble flights from all international locations for one month”. There were also 32% of citizens who said “suspending flights is not the solution”, while 3% couldn’t say. The findings of the survey indicated that 65% of citizens are in favour of suspending Vande Bharat arrivals of passengers from UK and South Africa, while 43% are in favour of suspending all international arrivals, to contain coronavirus variants. The poll in question received 8,803 responses. 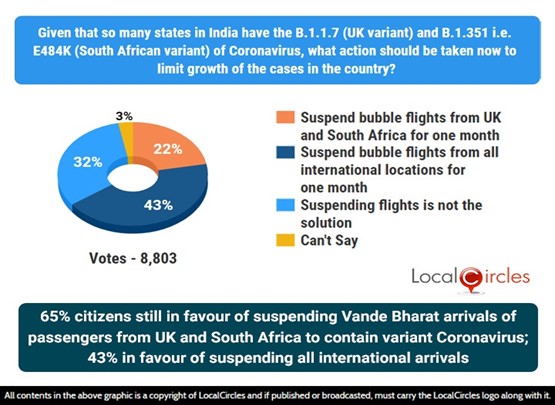 According to many citizens, while the damage has already been done and the variants are at different stages in India primarily due to all the international arrivals in last 3 months. However, atleast shutting flights now will not bring in new infections and new strains. For instance, the P1 strain or Brazilian variant has called havoc in Brazil with anywhere between 2500-3500 daily deaths. Now countries like Uruguay are also reporting high number of daily cases and deaths caused by this strain. Many citizens who participated in the discussions on the subject indicated that they understand that international trade and foreign investments may get impacted in the short term due to flight restrictions, many with important travel needs may have to postpone or cancel that trip. What the country can’t afford at this junction is a repeat of 2020 and hence temporarily shutting international flights atleast from high-risk locations with high B.1.1.7, B.1.351 and P1 cases is something India should seriously evaluate.