Though 6 in 10 Indians support Government’s handling of the Russia-Ukraine situation, many unhappy with Russia’s actions

March 2, 2022, New Delhi: India faces its testing time on the heels of an escalating war between Russia and Ukraine. In 6 days after Russian President Vladimir Putin waged a war on Ukraine, over 400,000 civilians have reportedly fled into neighbouring countries, more than 500 civilians killed and 3000 wounded. In response, the 27-nation European Union (EU) has decided to supply weapons to Ukraine’s armed forces, including providing fighter jets. The EU as well as the US and the UK have imposed severe sanctions on Russia meant to cripple the Russian economy vis-à-vis their military action. Some of these measures include removing selected Russian banks from the Swift messaging system, freezing the assets of Russia’s central bank among a series of other sanctions. Many countries have also banned Russian aircraft from entering their air space. Most of this followed after Putin has put his country's nuclear forces on "special" alert, threatening a nuclear attack on Ukraine and countries supporting Ukraine. Ukraine is a democratic nation of 44 million people that won independence from Moscow in 1991 at the fall of the Soviet Union and has pushed to join the North Atlantic Treaty Organization (NATO), an intergovernmental military alliance between 28 European countries and 2 North American countries—the move Russia vehemently opposes.

India has, so far, chosen to stay on the sidelines and do no more than the unavoidable minimum. Ukraine had earlier urged India with an appeal to tell Russian President Vladimir Putin to stop any more military adventure. Late last week, India abstained from a United Nations Security Council (UNSC) resolution, which called for condemning the Russian military action against Ukraine. Even though India abstained from voting on it, it expressed its displeasure about the Russian actions in the written note. Experts maintain that India's balanced position is not a product of Russian pressure but the result of a desire to safeguard its own interests. India now faces more difficult choices with the US and EU nations pushing for a vote at the United Nations General Assembly (UNGA) aimed at “isolating Russia”. India's problem is China, and it needs both the US, EU and Russia to deal with the China problem. India has thus far refrained from supporting any resolution against Russia.

The question that was asked in the survey over a period of 5 days asked citizens, “How do you believe India should be handling the Russia-Ukraine situation?” In response, the majority of 62% of citizens said India should continue “Just like it is doing (not voting on UN resolutions against Russia and requesting Russia to end violence)”. Breaking down the poll, 33% of citizens believe India “Should instead support Ukraine and vote on UN resolutions and support any other sanctions against Russia”. Only 5% said India “Should continue to not vote against Russia in the immediate term but in the medium/long term move away from supporting Russia”. This question in the survey received 9,655 responses in the latest polling round and over 10,034 responses on Feb 26th. 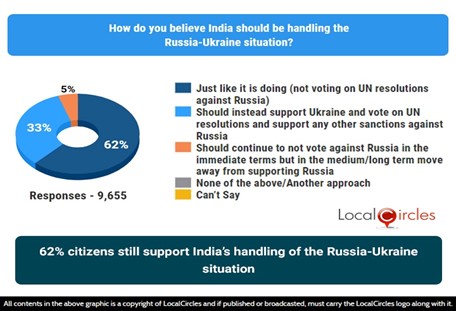 When LocalCircles asked a similar question to citizens on Feb 26th, 73% of citizens said they support India’s handling of the Russia-Ukraine situation of not voting on UN resolution against Russia. This percentage has now dropped to 62% this week as Russia issued a nuclear threat on the weekend. 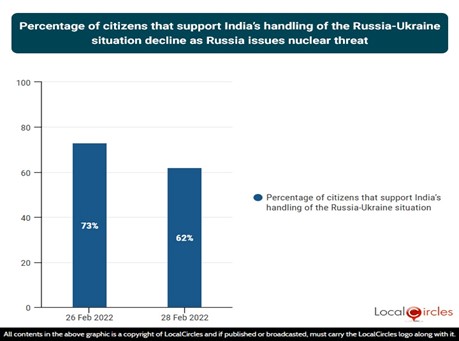 India’s position on Russia aside, 1 in 2 Indians support sanctions being placed on Russia for its act of war on Ukraine 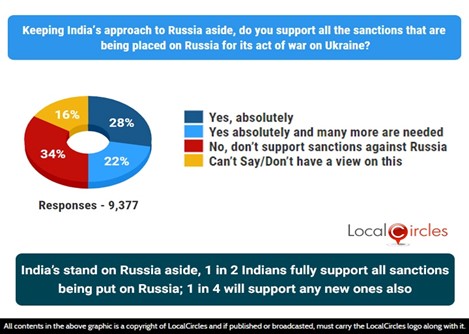 Several European nations as well as the US and UK among other countries have supported Ukraine with intelligence, funding and equipment to armed forces in the last 48 hours. But before Ukraine had any support from other countries, when Indians were asked about the lack of support early on, 2 in 3 Indians surveyed said that if countries don’t support Ukraine, there is a risk that other large countries will start attacking smaller ones in the future to expand their territory. 9,900 people in the survey had expressed their views on this.

In summary, 62% of Indians still support India’s handling of the Russia-Ukraine situation given the circumstances, its longstanding relationship with Russia and its dependencies. This percentage has, however, declined from 73% as of Feb 26th survey as Russia issued a nuclear threat on Feb 27th. However, keeping India’s dependency aside, 1 in 2 Indians do support the sanctions placed on Russia by various countries from around the world for its act of war on Ukraine. The key action, according to people in India, is for Russia to stop all violence in Ukraine and solve this through dialogue and peaceful negotiations. Some respondents in the community discussions expressed that Russia is already feeling the heat with the economic sanctions as people and businesses in Russia struggle to function and reversal of those sanctions must be offered to bring peace back. A war amidst a global pandemic induced by COVID-19 is something that the world cannot simply afford at this hour.